1990 was a banner year for all things David Lynch. In April, Twin Peaks began, exposing him to a far wider audience than he had probably envisaged, and a month later Wild at Heart premiered at the Cannes Film Festival, going on to win the Palme d’Or. Sometimes the recipients of the award are richly deserved, sometimes it’s a case of “What were they thinking?” and certainly, the film was greeted with as many boos as cheers when victory was announced. Controversy followed in its wake, agitating critics over its sex and violence. While I was (and am) a cheerleader of Twin Peaks, I can’t say I was ever that wild about Wild at Heart. I found it distinctive and fitfully inspired, but in general, I didn’t vibe with the adulation it received. As such, this is the first time in several decades I’ve revisited the picture, and even given my non-committal response then, I have to say it hasn’t stood the test of time.

One would almost think Lynch was actively trying to offend with the film, which is turned up to 11 throughout; it has a similar kind of intentionally in-your-face quality to Oliver Stone’s later Natural Born Killers, and variation in pitch and tone, which made Blue Velvet so impactful, is entirely absent.

Indeed, even the expected Lynch oddness, that sinister world that underpins surface reality, is rather undercut by the decision to make everything come back to The Wizard of Oz. After a while, the references serve only to emphasise this as a big, bold, gaudy cartoon, one with brains splattered across the pavement, wicked witches (or mothers) on broomsticks and leads who caricature unbridled rebels without causes (a midpoint doodle between Badlands and True Romance, but without the emotional resonance of either, since the only pitch here is one of hysteria).

Lynch was adapting Barry Gifford’s novel Wild at Heart: The Story of Sailor and Lula. He and Gifford obviously hit it off, as they would later work on Hotel Room for HBO and then Lost Highway, but producer Monty Montgomery had assumed it wouldn’t be the director’s kind of thing. Lynch saw it as “a really modern romance in a violent world – a picture about finding love in hell”, so it’s ironic that the passions of Sailor and Lula, despite the clear commitment of Nic Cage and Laura Dern, amount to little.

While Blue Velvet depicts a resonant, haunting world, leaving the viewer with a sense of the whole picture despite the aspects that leap out (such as Frank Booth), Wild at Heart sticks in the mind purely because of the surface reality; the fly-blown vomit in Lula’s room; the dog running out of a robbed bank with one of the teller’s blown-off hands in its mouth; and Cage’s ridiculous, mashed-up nose prosthesis in the final scene.

Which actually suggests it’s a lot wackier than it is. While Lynch seems to have thrown the kitchen sink at the picture (the title graphics promise something much more seductive and stylishly melodramatic than the movie we get), he appears to have done so in an entirely random way. The film is so languorous, it’s easy to forget it even has a vague trajectory (it is, after all, a road movie). There are competing villainies and passions, but they seem incidental or unfulfilled, and the red-lipsticked visage of Diane Ladd, amped up and over-acting all over the shop (she got an Oscar nom, but hers isn’t really especially entertaining over-acting, unlike some of the performers here) as she attempts to dictate the fates of Sailor and Lula, never attains the status of threat.

Obviously, Lynch would express disdain or indifference to any such traditional narrative considerations (such that he waivered over changing the ending from the novel to a happy one, even though it felt right to him, because it might be considered too commercial), but it leads Wild at Heart into a kind of formless territory where it’s only the incidentals that engage; Blue Velvet works so well because it has the luxury of play, content in the knowledge that its basic structure is solid. Here, Lynch’s tics and cuts and fades and inserts seem affected, almost self-parodic, like he’s aware that this is what he does now; they seem mechanical (and sometimes arbitrary). Perhaps it’s from working off someone else’s material, but Wild at Heart’s impact is only intermittent.

Sailor: It’s too bad he couldn’t just visit that old Wizard of Oz and get some good advice.

You have the great Harry Dean Stanton, used entirely forgettably. JE Freeman fares better as gangster Santos (he would later have an amusingly nasty role in Alien Resurrection), but the only substantial part that lingers is Willem Dafoe’s hilariously perverse Bobby Peru, with his revolting gummy teeth, pencil tache and twisted menace (forcing Lula to say “Fuck me”, he reduces the odious assault to a punchline as he makes off with “Someday I will, but I got to get going!”)

Lynch knows he has something to savour with Dafoe, although he never quite makes the most of the potential. That said, a close-up is his leering, gargoyle mug in a stocking goes a long way, and his gleefully slapstick demise (blowing his own head off by accident) is illustration that, if Lynch is aiming for something very different tonally, he’s only able to capture it fitfully.

But there are some resonant incidentals en route. Most of the gathered Twin Peaks alumni have little impact other than visual (Grace Zabriskie in a blonde wig – Isabella Rossellini likewise, both emphasise the raven eyebrows – Sheryl Lee as the Good Witch, David Patrick Kelly as a heavy), but Sherilyn Fenn’s car crash victim is a rare moment of genuine emotional weight, even if Sailor attempts to undercut it (asked if she will make it, he comments “I don’t know, but she’s going to bleed all over our car, I’ll tell you that”).

00 Spool: Mentally, you picture my dog, but I have not told you the type of dog that I have. Perhaps you might even picture Toto from the Wizard of Oz. But I must tell you that my dog is always with me.

Jack Nance makes more of an impression in his one scene than his previous two features with the director (“My dog barks some”). A hotel sequence could have come straight out of Twin Peaks, with its eccentric tableau of a hotel manager (Peter Bromilow) on crutches and doddery old guys with walking sticks.

Then there’s the standout lunacy of Crispin Glover’s cousin Dell, a basket case who actually is, unlike Peaks’ Johnny Horne, believing aliens with black rubber gloves are following him around, intent on destroying the spirit of Christmas, controlling the rainfall (aliens will recur in Peaks of course), and who stays up all night making sandwiches (“What are you doing?”; “I making my lunch!”) The tale reaches its antically mirthful climax as Lula recounts how Dale was prone to infesting his underwear with cockroaches, and “One day they found him putting one big cockroach right on his anus”, to which Cage’s delivery of “Hell, peanut!” takes some beating.

Indeed, while the love story between Sailor and Lula leaves me entirely unmoved, both deliver some memorably amusing moments. There’s Lula’s response to the stream of effluent on the news (turtles released into the Ganges to reduce human pollution, and thence crocodiles to devour floating corpses) and Cage (who did a good backflip back then) at the conclusion, after being beaten up by the gang, intoning in drawling Elvis deadpan, “I want to apologise for referring to you gentlemen as homosexuals”.

Sailor: I didn’t have much parental guidance. The public defender kept saying that at my parole hearing.

Cage has always been a marmite actor, but there’s little doubt he was at his creative peak during this period, even if his method antics (he cites working with Lynch and the constant script revisions for helping ween him off method crack) had been a bit much. The likes Of Birdy, Peggy Sue Got Married, Raising Arizona and Moonstruck had shone a flattering spotlight on his talents, and Wild at Heart fully taps into his larger-than-life capacities (he’s basically doing Elvis to Dern’s Marilyn) in a way we wouldn’t see again until the end of the decade.

But, like Lynch’s directorial approach, there’s something of the embodied parody to Sailor. This is what comes to mind when you think of Cage doing crazy; bashing in brains and extoling the virtues of a snakeskin jacket, singing Treat Me or Love Me Tender, or even delivering a winningly goofy geek laugh. Yet Sailor, like Lula, is simply a surface sketch of a character; as Lula, Dern couldn’t be more different from her performance in Blue Velvet, but without any interior life, the flashbacks to rape, or her encounter with Billy, lack depth.

Perhaps, if he had kept his focus on Twin Peaks, that series would have maintained its quality, but as it is it’s fortunate he had his contributions to the show as a pointer to what he could do, otherwise the drop-off from Blue Velvet would seem much more dramatic. Wild at Heart has its plus points, but it’s a shame it’s one of Lynch’s most renowned works when other, more deserving efforts, have less exposure. 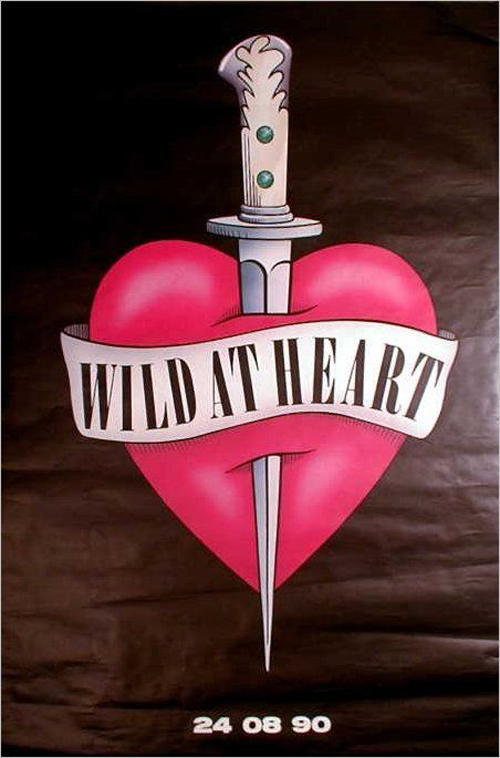 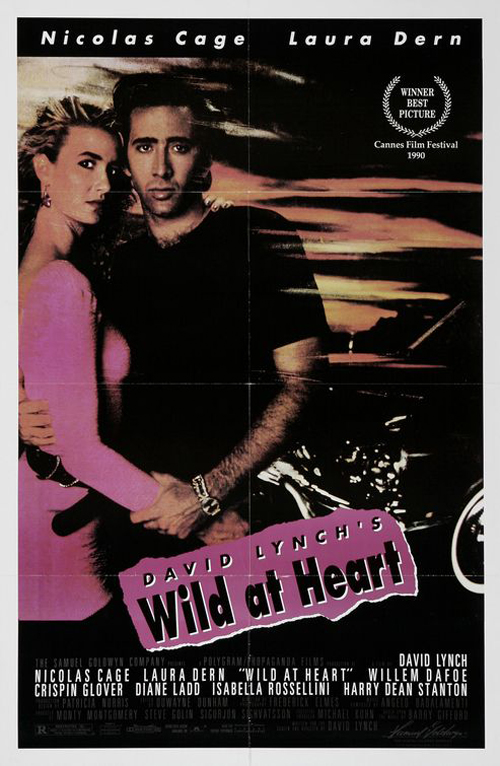