I have never tasted a more magnificent pheasant. It was a masterpiece, doctor.

The Avengers
3.5: Death a La Carte

An episode with a seemingly frivolous premise (murder in the kitchen), is furnished with surprisingly robust plotting despite itself. That said, writer John Lucarotti, in his pre-penultimate teleplay for the series, more than delivers on the humorous potential (and title). Which makes this very much Steed’s show, posing as chef Sebastian Stonemarten and enjoying himself immensely.

Dr Spender: (observing the Emir having a drink) You shouldn’t, you know.
Emir Abdulla Akaba: So you have been telling me for years.
Dr Spender: And so has your religion.

Part of the fun here, even though it isn’t dwelt upon, is that as a cook Steed can clearly compete with the best of them. He’s called in, under cover of a classically voluminous chef’s hat, to cater for the needs of Emir Abdulla Akaba (Henry Lincoln, of Doctor Who Yeti and Holy Blood Holy Grail fame, donning blackface), an ailing Arab in London for his annual health check who does so like to indulge the very best of gastronomic delights. Cathy is on board as his social director for the visit, but the Emir’s longevity is put down to the persistence of Mellor (Robert James, Lesterson listen in The Power of the Daleks); Dr Spender (Paul Dawkins) suggests he would have died years ago without him.

Steed: A vintage Burgundy, the company of a beautiful woman, and a boeuf bourguignon – my recipe for a perfect evening.

Steed’s co-kitcheners are Lucien (Gordon Rollings) and Umberto (David Nettheim, Fedorin in The Enemy of the World), each expressing different specialities of cuisine. Presided over by the pompous, prissy Arbuthnot (Ken Parry), they’re instructed to keep all food preparations clearly distinct.  All is not well, of course, or the Avengers wouldn’t be there, and someone is out to put an end to the “ill-tempered, vain, selfish old devil” (Cathy’s words; Steed replies that his personality isn’t important, to which Cathy retorts “Ah, but his oil wells are”).

The murder plot involves drugged mushrooms, secreted into the penthouse suite by Mellor and prepared by Lucien, although they don’t get the chance to carry out their plan, firstly because Steed destroys Umberto’s cannelloni (“You great big steaming nit!” exclaims Umberto, dropping all pretence at Italian origins) and then because the Emir expires from natural causes (a coronary).

The true cause of death isn’t revealed until the final scene, though, and there’s even a nice little touch at the end of Act 2 when Spender’s reaction to the Emir’s exit suggests he too may be involved. If there’s a criticism, it’s that we know it’s Mellor up to no good too soon, and his motivations are never clearly outlined (“I’m afraid your revolting friends won’t be too pleased when they find you’ve made a mess of it” says Steed, but who they are and why exactly they’re intent on offing him goes unrevealed, unless I missed it). As matters come to a head, Steed engages in a brutal fight with the Emir’s lackey Ali (stuntman Valentino Musetti), which appears to conclude with the latter getting a face full of chip fat. Very unpleasant.

Along the way, there are numerous lovely little moments; the look Steed gives Cathy when Arbuthnot is complaining that Stonemarten should be off preparing the pheasant; Steed’s description of how he will prepare said bird, “As you would say, ‘stupendissimo’. Transports one out of this world”; Steed bringing the Emir a plate of poached eggs after the cannelloni goes tits-up; Umberto serving the pair a fish-and-chips supper in the closing scene (“We’re frying tonight”).

A witty, zesty little episode then, and a great showcase for Steed’s all-conquering urbanity. Death a la Carte is also blessed with a full-bodied, flavoursome cast. 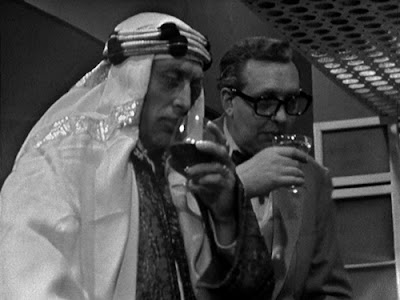 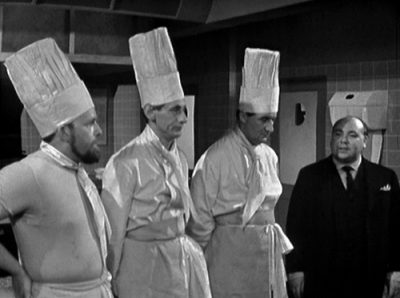 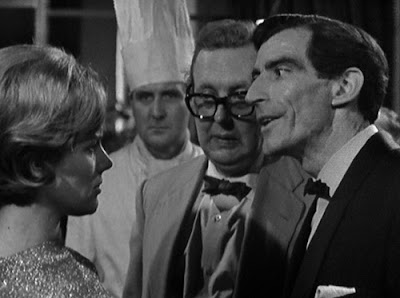 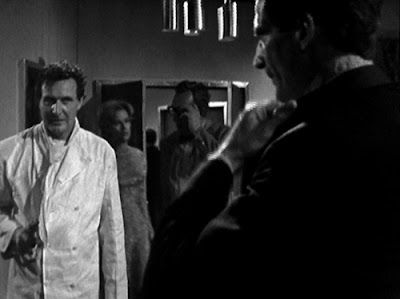 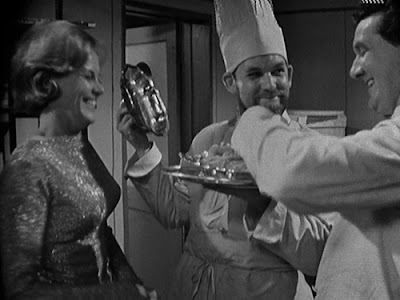