You pull that trigger and shoot me, I fall. And if I fall… they’ll have to alter all the maps.

A Fistful of Dynamite
aka Duck, You Sucker aka Once Upon a Time… The Revolution aka Gui la testa!
(1972)

You wouldn’t think there could be a forgotten film on the resume of a world-renowned director with only seven (officially) to his credit, but A Fistful of Dynamite rather reserves that mantle. The Colossus of Rhodes is rightly rather dismissed as unrepresentative of Sergio Leone’s style, obsessions and ambitions, but from that point on his tastes and interests are emblazoned for all to see.

He wasn’t originally going to direct Duck, You Sucker, which has as many reported proposed directors as it does titles – names like Peter Bogdanovich and Sam Peckinpah are thrown about, and Leone’s Assistant Director Giancarlo Santi was reportedly nixed by star Rod Steiger in favour of the supremo himself, ten days into the shoot. The finished product was, like Once Upon a Time in the West before it and Once Upon a Time in America after, horribly mistreated by an unsympathetic studio (a trilogy of mutilation). Even in restored form, there are occasional ellipses that lead to a lack of clarity, but Once Upon a Time… The Revolution is nevertheless confirmed, lest there was any doubt, as a magnificent piece of work, an ostensibly political picture that is actually all about friendship, a serious-minded epic that’s irrepressibly quirky and occasionally hilarious, and a work of sumptuous visual splendour wrapped in an Ennio Morricone score that will probably be a litmus test for how far you’re willing to embrace the composer’s eccentric choices.

The picture is a close second only to The Good, the Bad and the Ugly in my Leone ranking. It’s one that provokes debate over its director’s intentions and depictions, as is frequently the case, not least in the release extras which either promote myths or entrench personal tastes depending on your own personal tastes. Self-appointed connoisseur of all things Leone Sir Christopher Frayling pronounces it as Leone’s warning (the Italian title is effectively, ‘Keep your Head Down’) against the revolutionary spirit, so positioning him as a contrarian to the very zeitgeist-y mood of the period. It’s a film that begins with a Mao Tse Tung quote (“The revolution is an act of violence…”) but proceeds to dispel any alluring notions of honour and virtue in its processes. It ends with a question “What about me?” posed over the questioning mug of Steiger’s Mexican bandit Juan, now alone, but a glorious hero of the revolution, with the title Duck, You Sucker superimposed below him. Which could be read as advice not to get involved, to just stay out of it (although, narratively, it’s a bit late for that).

I think there’s a problem with overstating the ‘keep your head’ down case, though, since it suggests Leone is offering that as an all-encompassing answer (which, implicitly, would be to condone a status quo he is explicitly criticising). It’s been said Leone wasn’t an overly political guy, shooting from the hip, and I don’t think Gui la testa! is intending to give such an affirmation. It’s very clear on what is wrong, how those in positions of power, status and influence manipulate those without to their own ends, but Leone is not presumptuous about having a means of addressing this; he just knows very well that, for all that his pictures take great glee in enacting violence, it is not an answer. It merely creates and perpetuates cycles.

That’s why John/Sean has to die, and – whether intentional or otherwise – it’s instructive that the scene following the machine gun massacre inflicted by John and Juan, in which they’re giddy with said glee, depicts the rude awakening of a cave of resistance fighters’ bodies, including Juan’s slain family (I say “or otherwise”, as it appears there were originally several scenes positioned between these events, including the torture of Dr Villega (Romolo Valli), that lead to the atrocity, so my reading is a consequence of an edit Leone did not necessarily intend).

Leone, leftist in politics, had nevertheless been dismayed over the romanticism with which the radical left had seized the revolutionary ideal, and wanted to disabuse it of lustre. He also had Mussolini’s fascist exploitation in his sights, hence an anachronistically endearing mash-up of period and people (set in Mexico in 1913, so pre-official IRA, despite John being identified as such, with a very Nazi German as the primary antagonist, and WWII machine guns in action). Leone’s feelings are best summed up by the Juan dialogue above, which concisely encapsulates the truths of power and its plays. The director’s heroes tend to be anarchists, here and elsewhere, since systems of rule are inherently corrupt, manipulative and untrustworthy.

On the debit side, A Fistful of Dynamite is also a picture that emphasises Leone’s sometimes crude appreciation of gender politics. His milieus are very much male affairs, the women a means to an end (witnessed at is most controversial in Once Upon a Time in America), even in Once Upon a Time in the West, where a woman is ostensibly one of the three protagonists. Here, the rape of a rich stage coach passenger (Maria Monti) by Juan is depicted as something she secretly wants, and which Juan, with insights into their false superiority and lofty ignorance, recognises. It’s an uncomfortable scene, coming in an era recognised for such problematic content (see also Straw Dogs). The only other female character is a non-speaking part, Coleen (Vivienne Maya), central to the relationship between John and Nolan but purely instrumental, there to define her men.

Leone precedes the rape with a masterful sequence, a crescendo of extreme close-ups of the coach occupants’ cruel, greedy mouths and disdainful utterances in reaction to the lowly Juan’s presence in their midst. While this serves to align us morally with Juan, the subsequent assault ensures that, while he may be a protagonist, Juan is definitely not to be mistaken for a hero (he’s a criminal, a would be bank robber, one who arms his children and thinks nothing of murdering in cold blood).

But neither is Coburn’s Mallory; this is no glamorous depiction of an IRA man, as one might find Brad Pitt essaying, although Coburn chews into his character with typically whole-hearted relish (and a similarly eager, rather than necessarily accurate, approach to accent). John has excused himself from the fight; one revolution was enough for him, and now he believes only in dynamite (his services are for sale to the highest bidder).  He is nevertheless embroiled in this one, and haunted by the murder of his best friend at his own hands, a friend who betrayed him and so shattered all illusions.

It’s the purity of the friendship with Juan that brings John back to the land of the caring (Leone referred to it as a reverse Pygmalion, where the intellectual is taught by the naïve Mexican). Juan, whose country is “me and my family”. It’s been suggested (on the restoration doc on the DVD) that the ménage-a-trois revealed at the end, between John, Nolan (David Warbeck) and Coleen (Vivienne Chandler), provides John with a motivation to, in fact, inform on Nolan. Which could be a reading (equally it could be a reading that John and Nolan are themselves intimately involved), but that doesn’t appear to have been the filmmaker’s intent; the idea was for the open relationship to symbolise all that was good and untainted about idealised friendship (which is spoiled by the intrusion of politics). Certainly, the thought that John might have engineered Nolan’s capture didn’t occur to me before the doc forwarded it.

One of the oft-cited debates over Duck, You Sucker is the casting, and how Leone wanted Eli Wallach and Jason Robards as Juan and John. To be honest, it sounds like the kind of lazy casting that also put Clint Eastwood in the frame, a director settling for known quantities rather than looking for the best actor for the part. I can certainly see Wallach in the Steiger role, but I really like Steiger’s performance here, eccentric accent, mannered style and all (he and Leone apparently clashed, particularly due to his preferred spontaneity and the director’s yen for multiple takes – which is nothing new, there were similarly obverse approaches with Kubrick and Nicholson, and Fincher and Downey Jr).

Steiger also has great chemistry with Coburn, whose irrepressible exuberance really makes the movie. Robards would have offered an altogether more focused, controlled energy, which, again, could have worked, but would have reinforced the picture’s downbeat tone. As it is, Coburn fills the screen in a very vital, tangible way that helps link this back to the Dollars westerns rather than Once Upon a Time in the West, which is more taciturn and subdued (particularly with the taciturn, subdued Bronson). Their relationship also ensures this is, for all its tragic ending, perhaps the most life-affirming Leone film. The bonds in For a Few Dollars More and The Good, the Bad and the Ugly are motivated by financial interests or convenience, and the ones in Once Upon a Time in the West never really have substance. Once Upon a Time in America, meanwhile, is all about the death of the bond of friendship.

Once Upon a Time… The Revolution is also a frequently very funny film. The opening antagonistic squaring-off between Juan and John, parrying guns with explosives as they destroy each other’s chosen vehicular transports, is a hilariously extended piece of comic exchange, emphasised by Morricone’s uber-playful soundtrack. Throughout, Leone stretches time more than ever before – even for him – be it with the slow motion, jaunty motoring flashbacks in Ireland or the willingness to allow each and every scene its unhurried head; some may find the results slow, but I find that, contrastingly, they are rendered all the more engrossing as a result.

And, also on the amusing side, who can forget Antoine Saint-John’s indelible, ultra-creepy, egg-sucking, rigorously teeth-brushing Colonel Gunther Reza?

Gui la testa! is chock full of stunning or resonant moments and imagery, from the enormous bridge explosion, to the casual pan across firing squads filling pits with falling bodies, to John attempting to pacify a chicken then wringing its neck when soothing utterances fail. Sequences recall earlier pictures, but with even more panache (the opening combat is a replay of Clint vs van Cleef in For a Few Dollars More, and the flashbacks also recall that film, as the friendship with Juan and Villega’s betrayal cue John’s remembrances).

What of Morricone’s score? It’s a real curate’s egg. Even knowing the choral “shon shon”, I always hear it as “Sean, Sean”, so referring to John. Some find it much, much too much, but I regard it as a high point of the composer’s career, crazily expressive, funny, and irresistible; it helps the picture find balance with the darkness. Morricone knows where to find the light.

Revisiting a Leone film is a sobering reminder of how few really visual filmmakers there are working today. The likes of De Palma and Roeg are very much in decline/retirement or cannot get work, but the ’60s and ’70s enabled a perfect forum for stylistic free rein that would never be entertained today. Even the likes of Spielberg and Scorsese started to tread softly on their more distinctive talents as time went on. Leone ranks up there with Kubrick as a director with an innate understanding of the medium and how to immerse the viewer within it. And A Fistful of Dynamite might be his equivalent of Barry Lyndon; an unfairly forgotten work. Even if he didn’t recognise it, though, Leone got a lot luckier than Kubrick did with his lead casting. 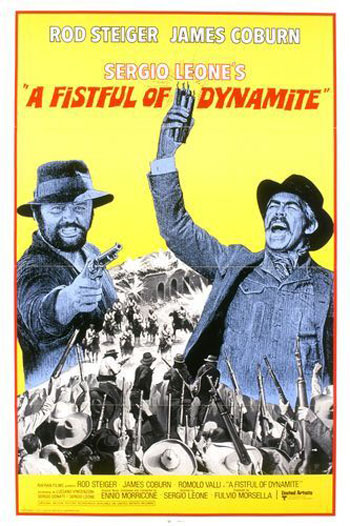