I’ve just had an apostrophe.

Good grief, this is a bad movie. Lest defective memory had been forgiving, and you’d assumed Indiana Jones and the Kingdom of the Crystal Skull was Spielberg’s nadir, rest assured, it ain’t. Hook is so appallingly, unapologetically, repellently self-indulgent and grotesquely aberrant in sentiment, that the really very good performance of Dustin Hoffman can do little to save it.

As unbelievably well-suited as Hoffman is to Captain Hook, channelling Terry-Thomas by way of Peter Cook, and so embodying a marvellously eccentric vision of preening pomposity, Robin Williams is benightedly miscast as the grown-up Peter. It was a hiding to nothing conceptually anyway, revisiting Peter as a yuppie, now he has forsaken Neverland, but if you had to go there, then piling Williams bland of mawkish, queasily smiling gloop on top of Spielberg’s was a terrible idea. I have to conclude this was the ‘berg at his most impressionable, malleable and star-struck, as the only big-name choice that works is wee Dustin; Williams, flying high from Dead Poets Society, and Julia Roberts, coasting off Pretty Woman, are agents’ choices.

And the picture as a whole smacks of “can’t-fail” hubris. It’s perfect for Spielberg, the family entertainer (“I have always felt like Peter Pan. I still feel like Peter Pan” – as have half the BBC’s employees of the 1970s, it seems*), and with that roster of stars it would surely become the biggest movie ever. There’s a collective ghost memory that Hook was a monumental flop, but it proved to be the fourth biggest film of 1991 worldwide (beaten by Terminator 2: Judgment Day, Ballad Adams: Prince of Thieves and Beauty and the Beast).

Spielberg, unlikely to totally malign something he made because he’s too affable a chap (except on Kermode & Mayo), and would mentally defer to the many who had worked so hard on his project before demurring, came close enough when he said, “There are parts of Hook I love. I’m really proud of my work right up through Peter being hauled off… for Neverland”. He goes on to suggest it would have worked better with a completely digital set, but would that it were so simple.

In a piece on Mike Medavoy, the one-time studio head corrected The Chicago Tribune’s summary of his less successful output at Tristar by noting that Hook delivered Sony a profit of $50m in all, while acknowledging it was a disappointment (I suspect, rather than $300m, they foresaw half a billion gross). The critical brickbats have undoubtedly marred its reputation, but there’s also that it cost way too much, and unusually, Spielberg went over budget.

The ’berg confirmed that Michael Jackson wanted to play Pan, but needed to be explained the concept of grown-up Peter as “a lawyer that is brought back to save his kids and discovers that he was once, when he was younger Peter Pan”. Which makes you wonder, what Wacko had in mind. Presumably playing Peter, panto-like, but an actor version of the actress tradition, as a boy (Spielberg had been developing a straight version of Pan during the ’80s, and it apparently got as far as pre-production, with both Hoffman on board as Hook and James V Hart furnishing the script).  What’s the alternative: playing a boy who never grew up as a boy who did grow up but who’s a boy inside? That would take some brainstorming. ** Much less than went into the screenplay itself.

Peter: My word is my bond.
Jack: Yeah, junk bond.

When you hear Spielberg say it, it sounds obvious. Too obvious, which is the whole problem (“I think a lot of people are losing their imagination because they are work-driven” he opined, in respect of the perhaps the least imaginative film of his career). Much the same as Hart’s inspiration coming from his son (“I realised that Peter did grow up, just like all of us baby boomers who are now in our forties. I patterned him after several of my friends on Wall Street, where the pirates wear three-piece suits and ride in limos”).

I dunno, maybe this might have worked, but not with the kind of apologetic performance Williams gives, and the resting-on-his-laurels direction from Spielberg (“I began to work at a slower pace than I usually do”). It has the chocolate box effect we’ll later see in Harry Potter and the Philosopher’s Stone, where all the world’s a soundstage, and nothing has any edge or idiosyncrasy (that’s not to malign the first Harry Potter, which is much more palatable than this, but it’s delivered as something a fait accompli).

Williams has a passing resemblance to a grown-up Harry, with his circular specs, but whatever else he is here, he’s unconvincing as a trader, a dad, and a green-tighted superhero. Even the ad-libs (“This is Lord of the Flies pre-school”) are ill-fitting. He was coming off something of a career high, with Dead Poets and two Gilliam productions, one with a truly inspired improv cameo, the other a frequently affecting turn as an unstrung widow, but this… You can see Spielberg invoking the earnestness of Jimmy Stewart’s famous yuletide meltdown, but it falls completely flat. And his star, with his waxed chest, eyeliner and strangely-coiffured hair, is all kinds of wrong.

I don’t know if anyone could have salvaged the concept, and Hart should blame his spawn for it, really. Because Hook is also a deeply mangled construction; the tragedy of a boy who refuses to grow up becomes the tragedy of a man who has lost his boyhood. Spielberg gets it backwards, and there’s even less resonance of Barrie’s thematic content than in the Disney version. Even the competition between Hook and Peter for the latter’s son’s affection is unpersuasive, as, great as he is, Hoffman’s Hook is pure caricature. There’s none, for instance, of the melancholy Jeremy Isaacs brings to the part in the 2003 film.

Messing with an existing property so rarely seems to work, yet studios never seem to be put off going there. Instead of a continuance, Warner induced a bereft origin with Pan (that couldn’t even get Hook right, and his substitute lacked flair), while Disney’s other grown-up childhood character, as explored by Tim Burton, another (increasingly lazy) purveyor of children’s fantasies, may have been a huge hit, but that was all about the 3D, rather than the content (hence the floundering sequel).

Hook is “cutely” aware of its own fiction, but never to advantageous effect. It might have been interesting to push the meta- and panto qualities, but instead all we’re offered is a static, hugely expensive set. The chocolate-box London – “London’s a magical place for children. It was for us”.  Yes, the glorious city of Jack the Ripper, and the Kray twins – is grim enough, but Neverland is truly the pits.

The pace eases to a crawl, and the Spielberg indulges the Lost Boys (complete with skateboards and a wise black child looking into Williams’ soul) to such an extent, it feels like we’re forced to endure six or seven hours in their company. He becomes the indulgent, doting surrogate parent; this is definitely the mooning father given too much rope to hang himself (that moppet singing is the inexorable nadir of this process). Peter must use his imagination to fly, but there is none in the picture, which even includes a sped-up food fight. Did I mention that it doesn’t just seem like it goes on forever, it actually does? Foreverland: there’s still an hour to go after Peter’s first encounter with the boys (Hook clocks in at two hours twenty minutes).

Hook: You’re Peter? But it can’t be. Not this pitiful, spineless, pasty, bloated codfish I see before me. You’re not even a shadow of Peter.

The irony is, Peter is, sort of, playing Wendy’s father George (certainly the George who rediscovers his zest in the 2003 film). And, without a George, Hoffman only gets the one plum role. Which is a shame, as this could have been another Tootsie double for him, and he might have added all sorts of texture given a chance (provided he had someone to rein him in).

Alternatively, another take (obviously, not one the ’berg would have been on board with) could have been to make the movie from Hook’s point-of-view. It might have been different at least, establishing Peter as a noxious influence rather than one to be sympathised with. Not that I’m endorsing such messing with much-loved characters, but if you must… The basic fact stands, though. Hook is not a good film by a long stretch, but Hoffman’s Hook is something else.

Smee: I’ve just had an apostrophe.

The rest of the cast are rickety to say the least. Everyone is full of that end-of-term gusto that doesn’t necessarily invite good performances. Hoskins is fun, and complements Hoffman (the scene where Hook attempts to commit suicide – again – is particularly amusing).

Maggie Smith and (her screen debut, thanks to godfather Steven suggesting it) Gwynie are both very good as Wendy (which is certainly one respect where it trumps the Disney toon), and Caroline Goodall is terrific as Mrs Peter (“… a few special years when they want us around”; she makes the dialogue sing). Charlie Korsmo, who “graced” Dick Tracy the year before as the Kid, is another case, like Roberts, of Spielberg just casting anyone who’s been in a major movie of late. He’s neither bad nor good, although it’s at least easy to appreciate Jack’s disaffection for a dad embodied by schmaltzy Williams.

Because Spielberg has never been a maestro with comedy, at least where it doesn’t complement the drama (see 1941 for further evidence of failings), any attempts to play up the goofiness tend to flounder, particularly when it comes to the stunt cameos (Phil Collins, Glen Close in a beard). Julia Roberts’ Tinkerbell is particularly heinous. He even admitted she sucked (“It was an unfortunate time for us to work together”). Once we reach Tootles flying, and receive the invitation, in an unflattering echo of Dead Poets Society, to seize the day, there’s little preventing the persevering viewer from suffering a gastric embolism and expiring. “To live would be an awfully big adventure” is the just the kind of twee bullshit re-configuration Spielberg gets shit for, and in this case,  it’s entirely deserved, alas.

Nick Castle (The Last Starfighter) was going to direct, until he was overpowered by star power. He had a lucky escape. Presumably out of respect to Spielberg being Spielberg, this dreck still grabbed five Oscar nominations, some of them baffling (Art Direction – a big set doesn’t equal a good set; Visual Effects – they’re average at best; and Costume Design). John Williams’ score is interesting, in as much as the bits that aren’t insipid appear to be a test run for the prequels’ Anakin theme. Hook is mainly, aside from its spirited title character, a constipated, horribly stagey, static, inert disaster of a movie, striving to manufacture magic that eludes it. Spielberg’s entire movie is one long – very long – error. No wonder he was left to speculate, “Someday I’ll see it again and perhaps like some of it”. Good luck with that. But if you do, Hoffman is the place to start. And end.

*Addendum 16/07/22: It’s quite possible Hook is, in fact, the truest insight into the real Spielberg, an additional reason – beyond its abject lack of quality – he might wish to distance himself from it.
** Addendum 16/07/22: And lend itself to disturbing connotations. 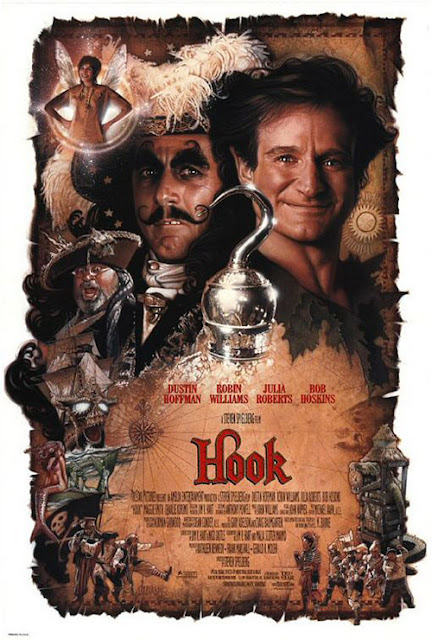