Before we go solving the crime of the century, let’s deal with the rotting corpse.

The strong reputation of an artist can be a two-edged sword. It rightly results in anticipation for a new offering, but conversely can lead to greater disappointment when they fail to live up to past form. I had tempered expectations for Iron Man Three, expecting a watered-down, Marvel-isation of its author’s imprint, yet came away thrilled by just how much of a Shane Black movie it turned out to be. Kiss Kiss Bang Bang arrived as a fully-formed, instant classic, but I still knew I’d need several viewings to take it all in. The Nice Guys may also require further digestion. There are elements here that occasionally suggest Black may be a little too inclined to rest on familiar tropes, but how you do you separate out the indulgent ones from those you look for and relish when they recur? Which is to say, The Nice Guys is my current film of the year, even if it isn’t quite unalloyed perfection. By year’s end, and several revisits, it might well have revealed itself as such.

Black is operating in his element here, siphoning that preferred mismatched buddy pairing, one capable, one comic, or medleys of the same, as Ryan Gosling (PI and former cop Holland March, although there’s absolutely nothing in his demeanour or behaviour to suggest he was ever a trained police operative) and Russell Crowe (enforcer Jackson Healy) team up to solve the mystery of missing Amelia Kutner (Margaret Qualley, best known to the five people who watch it – the rest are really missing out –  as the daughter in The Leftovers).

Crowe and Gosling have a marvellous rapport, as strong in its own way as Val Kilmer and Robert Downey Jr’s in Kiss Kiss, but the more striking in their different outlooks and appearances. So Gosling is close-ish to Downey Jr, and Crowe to Kilmer, except that March is unrepentantly cowardly, mercenary and incompetent in a manner that makes Harry Lockhart look like Sherlock Holmes. Healy, meanwhile, is supremely sure of himself in action, but doesn’t have the brains of PI Gay Perry. Which is to say, in summary, that as a team March and Healy get by more on luck and happy coincidence than any notable talent for detection or bringing perpetrators to justice.

Crowe’s at his most affable and enjoyable in years, an actor who hasn’t exactly indulged his talent for comedy of late (the last was A Good Year, and playing Hugh Grant isn’t really his forte) but takes to the laughs like a duck to water as the burly, beefy Healy. His penchant for protecting the innocent, and the setting of the Californian movie world, and the presence of Kim Basinger, occasionally echo L.A. Confidential (although not too much, Healy is a very different kettle of fists to Bud White), a reminder that there was good cause to make a fuss about the actor once upon a time.

Gosling is a riot, enthusiastically embracing every lowdown, unworthy aspect of March, complete with high-pitched screaming whenever he’s in pain or danger (or unable to scream at all, in one memorable, Lou Costello-styled interlude with a corpse). Healy’s chief redeeming feature is his devotion to daughter Holly (Angourie Rice), a better detective than the dubious duo put together.

Holly is played note-perfectly by Rice, the latest in a line of smarter-than-feasible Black minors. If some of his favourite devices are subdued this time – he largely resists the Christmas setting (it’s there at the epilogue), his persistent backdrop of choice – the junior protagonist is an element that goes back Last Boy Scout (or The Monster Squad, even). Holly is consistently used by Black – as with all his juvenile characters bar Long Kiss Goodnight; I’ll excuse him responsibility for Last Action Hero – in a manner that reverses the de facto annoying child of Hollywood movies.

However, there are aspects of the context that made me a little uneasy this time, and also the feeling that Black might just be falling back on what comes easiest. Ty Simpkins (who appears in the opening scene) showed up for one act in Iron Man Three, and made a perfect complement to Tony Stark. Holly appears and keeps bobbing up, to her father’s increasing exasperation, even armed with familiar barbs (her dad is “a fuck up”, which is exactly the term Bruce Willis’ vituperative daughter use in Boy Scout). The smart-mouthed, resourceful Nancy Drew/Hardy Boy kid is maybe in danger of being a bit over-frequented, to the extent of it becoming the crutch wagging the dog; Black gets away with it because he’s a master scenarist and wordsmith, but if he keeps on this course, it will eventually reach a stage of “Not again, Shane.”

Black revels in the push-pull struggle between his lead characters acting, or coming up short at being, the shining knight and doting father, and the base yuks to be had from kids spouting obscenities. The former probably comes from his love of the pulp genre, and the morally indefatigable private eyes of  ’40s noir, themselves standing on some rarefied plane in judgement of the cesspool around them. This noir aspect also feeds into the preference for labyrinthine plotting, where (particularly with something like The Big Sleep) the thing is not solving the mystery but what transpires along the way.

So the opening scene, after the fact, seems like an elaborate commentary on the film to come, and its own artifice, in being a movie about a moviemaking town in which a movie is the MacGuffin (which our heroes don’t actually know is a MacGuffin until a considerable way into the proceedings). Misty Mountains (Murielle Telio) careers through Ty Simpkins house (in a shot that turns out to be typical of the sudden, random, but often useful violence occurring in the picture) and ends up spread-eagled, a bloodied nude tableau, one part a meditation on sex and death and one part the fantasy springing from the mind of an thirteen-year-old boy, or the mind of the eternally thirteen-year-old Shane Black; I was half expecting it to turn out to be a dream sequence, as if the Coen brothers had turned all lascivious for a second there.

The Nice Guys is set in a decade of movies where runaway teenagers got involved in no good things connected to the movies (Night Moves, Hardcore), a decade whose movies wore its transgressive, seedy underbelly on their sleeves. Yet Holly passes through events with her sense of right and wrong intact, her disarmingly unadulterated (non-movie) morals finding her questioning Healy’s impulse to kill the bad guys (“Are you a bad person?”) The dichotomy operating in Black’s picture (or pictures) mostly works, but there’s a nagging feeling that, to whatever relatively innocuous degree (because this is a fiction, obviously) he’s perpetrating what he’s preaching against, and as such that Holly would be more effective reined in, a sense added to by her scene-stealing best friend, when John Boy makes a murderous house call.

The conspiracy plotline ultimately veers towards the “whatever”, but as noted, that isn’t usually the make-or-break with Black’s kind of detective fiction Black. I did wonder if the environmental theme, much more so than his musing on exposing kids to sex and violence by exposing them to sex and violence, was a little too calculated, however. Perhaps he’d been reminiscing about The Long Kiss Goodnight, and how he’d created a talking piece with his pre-9/11 false flag incident(s). But the smog-heavy LA (with gas masked protestors offering a tableau of poisoned bodies; quite reasonably, they’re asked why they’re supposed to be dead from air pollution when they’re wearing masks for protection), with car companies and government colluding to keep the catalytic convertor from saving us all, seems rather small fry and tokenistic.

Maybe Black is wryly commenting on the ongoing conspiracy of suppressed technology that could help us all if only it didn’t stop the big companies making a buck or two (“In five years we’ll all be driving electric cars from Japan”), but The Nice Guys’ corruption doesn’t linger in the mind the way Chinatown’s does. Still, if, in true ‘70s fashion, the good guys don’t win, they don’t end up in the doldrums either. Healy may have been driven to drink come the end, but March has stopped, as if in recognition of the amended, initially sad note he wrote on his hand (“You will… be happy”, the “never” having been erased).

The Nice Guys is a very funny film, of course. That’s the key to Black’s milieu; memorable characters projectile vomiting clever, witty, crude, caustic dialogue in terribly violent situations. As noted, this one makes a particular virtue of sudden, seemingly random chance or synchronicities, which take the form of narrative punchlines. March falls into a clue at one point (the aforementioned corpse), and the only time he attempts proper (movie) detective work, he’s revealed to be barking up completely the wrong tree. Although, by chance, and par for the course, they end up stumbling on the very place they’re looking for.

The violence is often hilarious (the death of henchmen, not at the hands of our protagonists, but by truck or paving slabs, get some of the best laughs in the picture; although spoiled by the trailers, they are surprisingly not spoiled in context), sometimes shocking (Amelia waves down the very car with John Boy in, finding Black working his coincidence formula both for and against our heroes), at other times both (at one point, a woman in the house next door to Healy is randomly shot when one of the henchmen misses his target).

The general movie-going public have paid little attention to The Nice Guys, so it will have to settle for cult status. I’m none-too-surprised, as I had doubts it would find a niche as summer counterprogramming. Fortunately, while it may not be making Warner Bros a lot of money (they’ll likely break even eventually), it isn’t so expensive as to keep Black from making more movies he wants to make, with The Predator and Doc Savage lined up to go in quick succession. Will The Predator feature a juvenile sidekick? Will Doc Savage have his own Short Round? Will they both be set at Christmas? Hopefully, after that double, Black will return to the buddy crime genre. Maybe he should just go for broke next time, and relegate the adults to purely sidekick status.

*Addendum 16/07/22: Such diligence in the narrative doesn’t appear to have extended to Shane’s sets, mind. 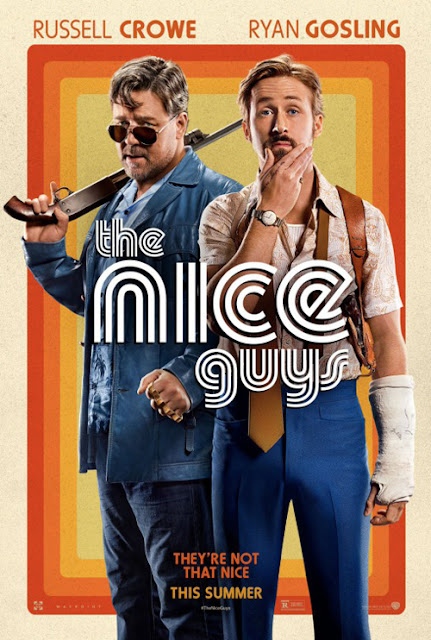