Doctor Who
The Mutants

I don’t think anyone out there is lauding The Mutants as an unsung classic, except perhaps those invoking The Daleks by one of its working titles (but let’s not go there), or possibly those with fond memories of the Target novelisation (Terrance Dicks at his most spartan, but what a cover!), but I do feel it’s on the receiving end of more than its fair share of disdain. Sure, it’s threadbare, slipshod, with some terrible casting decisions, ropey design work (and effects), and – despite a typically idea-laden script from the Bristol Boys – unable to sustain its six-episode length. It’s also got Big Nose on particularly abrasive form. But, in its favour – and it’s a magnificent favour – it features the one and only Professor Sondergaard. And as we know, or should, Sondergaard ROCKS!

As with most Doctor Who stories, documented to the nines as they are, The Mutants comes replete with its own set of oft-repeated wisdoms, from how it’s an allegory for the fall of the British Empire to one on apartheid, to how it starts off like the average Monty Python episode, to the legendary, Olivier-like performance of Rick James (he’s shit). And then there’s Tristram Cary and his Marmite moog (I’m a bit in between actually, not sold the way I am with Malcolm Clarke’s electronic assault on the eardrums in The Sea Devils; sometimes Tristram works, sometimes he gets Cary-ed away and the result is an unpleasantly atonal wall of noise).

The attempts at political subtext feel rather quaint now, not helped by the overstated and silly uniforms and entirely uncommitted performances (it’s mystifying that this bunch, a corpulent commander leading disinterested assistants, could subdue a planet full of Solonian warlords for five minutes, let alone 500 years). The Doctor is even required to spell it out in the first couple of scenes (“Well, Empires rise and fall… And if this is their idea of a reception, this one has obviously imploded”). Inadvertently, it also gives the bastions of the Empire a trace of good graces (they’re pulling out, now they’ve strip mined the place), so the Marshal is positioned as a bad egg spoiling an otherwise, if not upstanding, no longer overtly adversarial carton.

But The Mutants definitely has something. That’s generally an excuse used for not wanting to label something terrible as terrible, and certainly around the midway, things are looking a bit dicey.

By this point, we’ve experienced classic lines such as “Die, Overlord Die!”, with James Mellor’s Varan making a highly unconvincing badass warlord, so much so one could easily imagine Matt Berry playing him for laughs and proving more fearsome. But one gets used to the unabating clash of performance styles (or, in James’ case, no style at all) after a while.

Paul Whitsun-Jones plays the Marshal as both pathetic and spiteful, but he’s never really intimidating: more plain churlish. Ky (Garrick Hagon – latterly Biggs Darklighter) is a dashing chap who really ought to have swept Jo off her feet, and as guest heartthrobs go Hagon makes a good stab of it, when not having to spout guff like “We want freedom and we want it now!” And then there’s Geoffrey Palmer, bringing effortlessly stuffy cool to – just – the first episode, and George Pravda bringing George Pravda to scientist Jaeger. There’s also a curious Eastern European thing going on, what with Pravda’s natural tones and the accent adopted by John “Lobot” Hollis as Sondergaard (who, simply, ROCKS).

Jaeger: There’s no proof at all that my atmospheric experiments have anything at all to do with these mutations.

Bob Baker and Dave Martin entreat not only against oppression, but also the erosion of our imperilled environment. The above line is one for the climate change deniers, although one might perversely get the wrong end of the intended stick and posit that in the The Mutants the pollutants do no ultimate damage, merely accelerating a natural process, to an ultimately positive end.

The Doctor here is still an activist, though (“Land and sea alike, all grey. Grey cities linked by grey highways across grey deserts… Slag, ash, clinker. The fruits of technology, Jo”). And, at times, given to loony stream-of-consciousness abandon (“The slightest accident in this stage of the proceedings and we’d all reverse instantly into antimatter. Blasted out to the other side of the universe, as a flash of electromagnetic radiation. We’d all become unpeople undoing unthings untogether. Fascinating”: indeed, just ask Omega).

Ky: The disposed, the outcasts, the terrorists, as the overlords label them.

Being the ‘70s, we could get behind terrorists and see them as justified. Ah, heady days. What works its retro best in The Mutants is the psychedelia, though. It doesn’t have the creative flair Michael Ferguson brought to earlier colour foray The Claws of Axos, mainly because Chris Barry doesn’t seem to be putting in very much effort. But some of the ideas can’t help but bleed though into the visuals, mainly evidenced in the cave scenes and the garish lighting thereabout, all reds and greens, and the CSO-rendered radioactive chamber (and then there’s the presence of Sondergaard – did I mention he ROCKS?)

We also have a suitably New Age plot about metamorphosis, not the rather mundane (but let’s face it, much more integrally told) metamorphosis of the later Full Circle, but a transformation into a more evolved life form on every level. This is all about uncapping potentiality, achieving transcendence. Ethereal glowing and telepathy become second nature (“Go Varan. Go to the place of sleeping. The place of darkness and night”). Although, admittedly, the story isn’t really selling the “beauty within” thing, since ugliness is ultimately discarded (so it is what’s on the surface that counts?), and shiny, happy-floaty Super-Ky isn’t suddenly above getting his hands dirty (“Die, Marshal. Let there be an end to the torture of my people”).

And you have hippy-shaman Professor Sondergaard (who ROCKS), a very groovy, chrome-domed anthropologist dude who isn’t smart enough to worked out that Solonians have lifecycles (he needs the Doctor’s help, naturally) but digs beads and has a winning way with Mutts (he’s a regular pied piper come the third episode, and has a good line in reverse psychology; “Very well, I shall go on. And you shall stay as you are now, forever”).

In fact, he’s a much more engaging doctor than the actual Doctor in The Mutants, who repeatedly calls the Marshal “quite mad” and is really little more than a delivery boy (talking of which the whole “particle reversal” obsession of Jaeger, simply because the Doctor mentioned it and anything’s worth a try, is desperately weak).

The Discontinuity Guide would have you believe Geoffrey Palmer is the best thing in this (he’s not, Exhibit A being the pre-preceding paragraph), and that his death in the first episode evidences its overall deficiencies in quality. But they also let Rick James off the hook with the excuse that he’s “given some of the worst lines in Doctor Who’s history” (he isn’t, he just can’t act for toffee), so their appraisal is somewhat suspect.

If Barry had been a touch more engaged, and the escape-and-capture, stir-and-repeat, of longer stories such as this had been limited, and the casting had been more judicious, and the music more moderate, and the effects more consistent… No, I’m not sure The Mutants might have been a classic, but classic moments do shine through, and James Acheson’s mutant designs remain iconic (not quite as much as that Jeff Cummins Target cover, but effective nonetheless). And, of course, Sondergaard ROCKS! 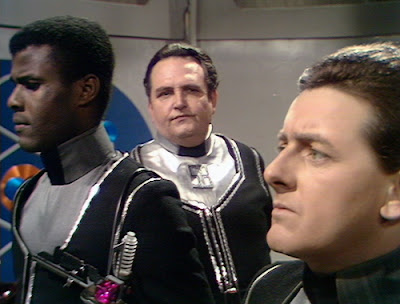 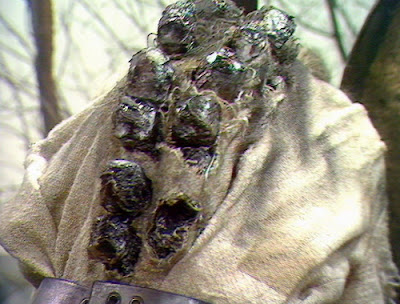 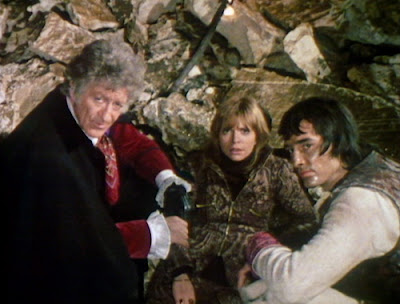 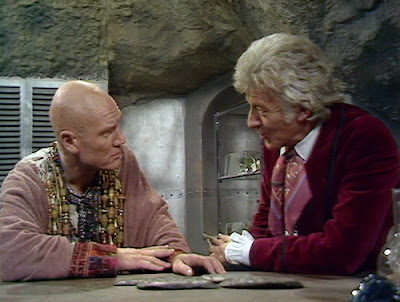 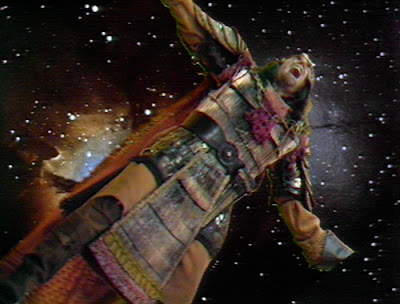 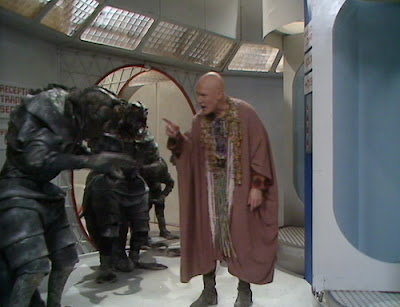 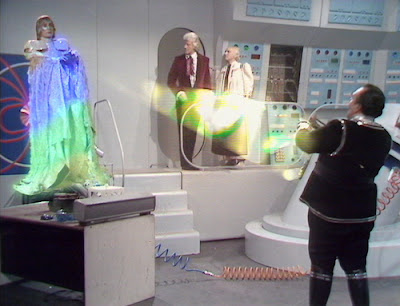 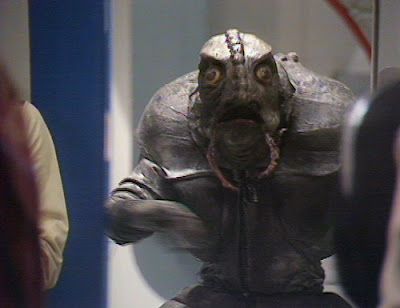