It’s not safe out there.

JJ Abrams lets fly a little Tommy Squeaker from his celebrated – or vilified – mystery box, and – waddaya know? – he has another hit on his hands. 10 Cloverfield Lane was on no one’s radar until a trail unfurled in the middle of January, and since then its behind-the-scenes moviemaking mythology has quickly snowballed into a discussion of cynical marketing that one might believe has eclipsed the movie itself. If one hadn’t actually seen the movie.

Originally known as The Cellar, then Valencia, it was rejigged during production when the Bad Robot team recognised thematic ties with 2008’s Cloverfield, leading to what has variously airily been described by Abrams as a “blood relative” and “spiritual cousin”. That’s still a tad misleading, in the way anyone expecting Halloween III to feature Donald Pleasance muttering darkly to himself would have been disconcerted at his complete absence, and evidences the kind of selling savvy at which Bad Robot are highly adept (or at times not so much, see the Khan-age that ensued from Mystery Box-ing Star Trek Into Darkness’ villain), but the result is undeniably a first rate, creepy, edge-of-the-seat thriller, expertly performed by its small cast and confidently delivered by debut feature director Dan Trachtenberg. About the only unearned aspect is linking it to Cloverfield.

Of which, Trachtenberg has said it doesn’t take place in the same fictional universe, which is a relief, as I was trying to figure out how these aliens matched the monster from the original in any way, shape or form. Fortunately, this element comes right at the end, so you’re hopefully not left too distracted during the really good stuff, but it’s a bit of an incontinent mix’n’match all the same. Messing with expectations in a way that ultimately doesn’t ultimately enhance the viewing experience. And I say that as someone who really liked Cloverfield, notwithstanding I’m not a huge fan of found-footage (I was slightly mystified by the backlash to the movie, as if people had been cheated).

I’ll discuss that ending first, since it really functions as an inessential coda. It’s fun, breathless and tense, but it pushes the picture from the skilfully depicted and immediate character-based threat and (relatively) plausible motivation of its protagonist into the low budget equivalent of blockbuster acrobatics. Heroine Michelle (Mary Elizabeth Winstead) had been fully summoning her repressed MacGyver tendencies hitherto, but now, as she is dragged up towards the maw of a semi-organic spaceship, she has the resourcefulness to fashion a Molotov cocktail and stick it up the ship’s stove pipe/arse/mush, before deciding she can’t get enough of that good action and resolutely heading off to fight the good fight. It’s more in keeping with the extravagance of Roland Emmerich than the oppressiveness of the preceding 90 minutes, so you can either see it as a much-needed release from that closed-in world or just plain frivolous and daft. I’m a tad torn.

The best of moment with regard to the unknown “Is it/isn’t it?” threat out there comes significantly earlier as Michelle escapes the clutches of saviour/captor/predator Howard Stambler (John Goodman). She reaches the outer airlock of his underground shelter, only to come face-to-face through with someone (Suzanne Cryer) who entirely meets the content of Howard’s dread admonitions of what lies beyond. It’s a stunning leveller, particularly as it was shrewdly teased in the first trailer, and impresses upon us how masterfully the Abrams box of tricks factory can pull the rug from under us when firing on all cylinders (admittedly, the lure of the title somewhat dictates expectations, but there’s the rub; you never really know with this kind of thing). Likewise, there isn’t much doubt that, when Howard begins waxing lyrical about his lost daughter, some ugly Josef Fritzl truth lies beneath (so making 10 Cloverfield Road a rather more sensationalist accompaniment to Room), but the exact course is no less impactful for all that.

This is, after all, a familiar milieu in the Abrams oeuvre. A large part of the first season of Lost was taken up with the mysterious hatch on the island, and the second season opened with its solitary sentinel Desmond, guarding vigil against the apocalypse (and convinced the outside was toxic) while accompanied by that very Abrams/Lindelof device of a classic song used to unsettling effect (there Make Your Own Kind of Music by Mama Cass); here we have I Think We’re Alone Now (not the Tiffany cover, which is some kind of unsettling all on its own). But where predecessor Cloverfield was a big monster movie shot intimately, 10 Cloverfield Lane is the reverse; classically but inventively shot (Trachtenberg made his mark with an unauthorised short film version of the Portal video game), it could work as easily as a play with the odd tweak.

Credited to Josh Campbell, Matt Stuecken and Damien Chazelle (the latter was attached to direct until Whiplash became a go project), the plot’s twists and turns wouldn’t land if the characters weren’t solid, and the characters wouldn’t gel if the casting wasn’t firmly in place. Michelle understandably wants to get the hell out of her confined setting, having been side-swiped by Howard in his frenzied attempt to get home before the invasion begins. She’s just left unseen boyfriend Bradley Cooper (that must be where she learnt all her A-Team shit, making hazmat suits, gasmasks and freezing through locks). Winstead’s onscreen career has unfairly not yielded a breakout success, since she was unfortunate enough to appear in Tarantino’s worst film by a grindhouse-ing mile and Edgar Wright’s flop Scott Pilgrim vs. the World, but through no fault of her own.

John Gallagher Jr is local boy Emmett who, in stark contrast to Michelle, fought to get into the bunker. He’s very much the third wheel in the battle of wills between Howard and Michelle, but Gallagher nevertheless manages to carve out a memorable place (I half-expected to discover he was in on Howard’s game, but that might have been a twist too far for Michelle to extricate herself from).

It’s that powerhouse John Goodman, as his best onscreen psycho since the much more endearing Hitler-heiling Charlie Meadows in Barton Fink, who really provides the fireworks, though, and Winstead holds her own against him. Howard’s an anti-Dan Conner, ever-slightly on-edge and not quite right, incapable of not rattling his guests when at his most genteel (they may as well be dirty birdies). There’s the dinner table scene, preceding Michelle’s attempted breakout and meeting with an infected, where he passes from studied calm to undisguised rage over Emmett’s gabbing, and then comes to within a hair’s breadth of assaulting Michelle. Later, when they play Who am I? and Emmett hears it as Howard’s admission that he knows just what they are up to, it essentially is that, and from there it isn’t any great distance to a bullet in the scruffy interloper’s head and a beckoning vat of perchloric acid (the better to have Michelle all to himself). Howard’s most unnerving moment, however, simply involves having a shave and offering an ice cream.

Amusingly, this is also the movie where the crazy guy in the basement is on-the-money. Pretty much everything Howard says about the alien menace up above turns out to be correct. I’m not sure if it’s designed as a shot in the arm for lunatic conspiracy theorists (probably not, since in a single character they’re also burdened with being basement dwelling psychopathic, murderous abductors of teenage girls), but I rather like the conceit.

Admittedly, 10 Cloverfield Lane lurches into the unlikely even before Michelle regains her freedom, when Howard survives taking a bath in said acid and becomes an archetypal horror movie monster-pursuer, and earlier still there’s a rather rote making-domestic montage that suggest more time has passed than it actually can have done, but these can’t detract from the core strength of the button-pushing here. Accompanied by a sterling score from The Walking Dead’s Bear McCreary, Trachtenberg has made a first-class little B-movie, one that very nearly justifies Abrams slightly eccentric obsession with secrecy by paying off in spades.

I’m not quite sure how much long-term potential there is in alien invasion-fringed movies with Cloverfield in the title, but if future encounters are as effective and unnerving as the first two (and yes, this “sequel” is the superior of the two), we could be seeing that impossible dream, a successful anthology franchise. 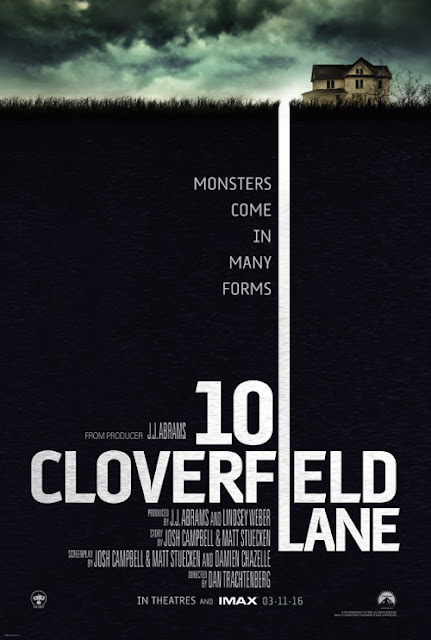