Half a million dollars will always be missed.

Commonly cited as the most underrated Tarantino film, Jackie Brown is usually simultaneously congratulated for being his most mature work, his picture that has heart (in that sense, it occupies a similar position to the Coen Brothers’ Fargo). This view has gained such traction, the picture is now, perversely, in danger of being overrated. Despite extruding a familiar pop-cultural dressing, this is where the director studiously proves he isn’t just a lot of flash and swagger, yet the result reveals a different set of weaknesses to those he has betrayed since.

You’d have thought, with the geek-fan casting of Pam Grier (Tarantino changed Jackie’s surname from Burke, in order to invoke Foxy Brown) and Robert Forster, this would follow suit and turn into one long elaborate homage. But, as with Travolta in Pulp Fiction, his actor fetishes also show an incredibly good eye for unsung, or unfashionable, faces. Grier and Forster are the centre of the movie, and the entire reason Jackie Brown works as well as it does; it’s evidence of the director’s cachet at this point that he wasn’t merely casting has-been stars in lead roles, but never-really-were ones and getting carte blanche with it.

Grier wasn’t exactly known for her acting chops, while Forster had mostly inhabited B-movies during the ’70s and ’80s. There’s an alchemy here, though, as the two actors gel in a very natural, unpressured way, Tarantino shepherding a growing relationship rather than excitedly jumping up and down, eager to gabble on to the next scene. The director was in his mid-thirties when this came out, and appears to have regressed in terms of his character work since. Certainly, nothing has exhibited the same deftness, insight and willingness to allow a relationship to evolve. These are two characters conscious of the pressures of time and age, albeit in different ways (Grier is playing a half-decade younger, an air stewardess who at 44 can feel life passing her by, while Forster’s Max Cherry confesses only to a concern over his disappearing hair, but has clearly been marooned by habitual behaviour patterns).

The result is a bittersweet romance between a couple who express their mutual affection by collaborating on a plan to hoodwink both the ATF (Michael Keaton’s Ray Nicolette) and small-time arms dealer Ordell Robbie (Samuel L Jackson). Jackie has been smuggling money for the latter, and as a result is under pressure from Nicolette and Michael Bowen’s LAPD detective Mark Dargus to cooperate.

At every stage, Jackie is revealed as an outstanding schemestress, joining the ranks of other uber-confident Leonard protagonists (see also Get Shorty and Justified), manipulating the law and the criminal fraternity to her own ends, aided, advised and abetted by the impressed and devoted Max. Tarantino’s familiar stylistic devices and adjustments of timeframe interpose very naturally here: the initial trial-run bag switch, where a third participant is revealed, and the later beach towel bag switch played from three different perspectives.

Max, meanwhile, is the picture of level-headedness; he knows his job and takes unseemly altercations in his routine-worn stride. The interactions with the self-regarding Ordell are particularly enjoyable, Forster underplaying effectively to Jackson’s instinctive camera-hogging. Early on, there’s a fine scene where Ordell requests a second bond (this time for Jackie, having disposed of Chris Tucker’s Beaumont on the back of the first), and Max explains his indifference to Ordell’s activities (“Whatever you’re doing you seem to be getting away with it, so more power to you”) while spurning his “white guilt” trip (“Ordell, this isn’t a bar, you don’t have a tab”). Later, pre-showdown, the nonplussed bail bondsman is threatened by Ordell, exhibiting persuasively unimpressed steeliness.

Jackie and Max’s plan goes off without a hitch, but the lack of happily-ever-after feels entirely appropriate. While they do finally kiss, he demurs the offer to accompany her to Spain. Max knows she doesn’t care for him as much as he does her (her invitation is almost an afterthought), added to which he admits to being a little scared of her (she’s supremely capable, legalities be damned). And, despite wanting to get out of the business, he’s too stuck in his ways; his mould is set. There’s more resonance here than in any of Tarantino’s other pictures put together, simply because he prefers Sturm und Drang over softly-softly emotional content.

It’s fortunate then, that the peripheral characters and incidents aren’t too distracting or overwhelming; they remain just that, peripherals. The downside is, this does mean you notice just how laboriously Tarantino is servicing them. Most of his pictures fly by, but while Jackie Brown never becomes inert, you definitely feel its two-and-a-half-hour running time.

The director scores with Bridget Fonda’s withering, bored, sarcastic stoner Melanie (“He moves his lips when he reads. What does that tell you?” she asks Louis regarding Ordell), meeting an untimely end after subjecting Robert De Niro’s Louis Gara to scorching derision one too many times (lost in the car park, she asks Gara “How did you ever rob a bank? Did you have to look for your car too?” It’s a hilarious, entirely deserved wind-up).

Keaton’s Nicolette, pulling double duties the following year in Steven Soderbergh’s Out of Sight, as the same character, marvellously delivers the ATF agent’s faux-naïve density, no match for Jackie’s plotting.

I’m less impressed by Ordell and Gara. Jackson and De Niro are suitably diligent, the former pulling off his latest ‘do with aplomb as a “ponytail wearing motherfucker”, the latter inhabiting possibly the least likable, dishevelled scumball of his career (I haven’t yet seen Dirty Grandpa). The problem is, as bad guys, we have no desire to spend time with them the way we do the very best Tarantino villains and anti-heroes. Ordell feels like a derivation of characters the director has already done, while Gara sucks all the energy out of the room (it’s ironic that Tarantino gets acting legend De Niro, then gives him one of the least prolific roles of his – then – career; apparently Stallone turned it down, and it’s easy to see why).

It’s also the Ordell side where the cracks of trad-Tarantino dialogue and geekiness show through, including the oft-selected but unrepresentative and rather irritating Ak47 scene (“The Killer had a 45”) and Fonda watching her dad on TV.  Other elements, such as the “Three minutes later” cue card for the perfunctory sex scene, actively work against the “respectable” card the director seems to be keen on playing. In contrast, when Jackie goes through her record collection and discusses CDs, it’s an actual conversation (even though we know it’s a Tarantino fave subject).

Characters talk about music more than movies here, from Ordell on his car stereo, instructing Gara not to adjust the levels, to his suspicion over Max playing the Delfonics (Max’s tribute to Jackie, which he keeps playing and playing; one wonders if Tarantino had been watching Chungking Express). Bobby Womack’s Across 110 Street is particularly well-used, bookending the picture first as an introductory anthem for Jackie, and then reprised to suggest an air of melancholy as life goes on regardless.

Despite its many estimable qualities, I don’t feel Jackie Brown is underrated; I’m definitely in the camp that sees it as a tad overpraised. It’s a long time since I last watched it all the way through, and I feel much the same as I did the first time. At points, it’s over-studied on its director’s part, suggesting he’s out to prove something to his critics by adapting a work of literature (Elmore Leonard’s Rum Punch). Which he certainly does in terms of pulling off the lead characters, the reverent (read: slow) pace, and relative restraint of the content (curiously, for a director so enamoured by gore of late, this film’s deaths happen either out of frame or direct line of sight).

But the allowing of the thing to breathe leads to too much ambling. The third film by Quentin Tarantino lacks bite, the most unlikely charge one might level at his oeuvre. Ironically, given my biggest complaint regarding his post-Jackie output is that he over-indulges himself, and that the typical Tarantino elements here stand out like sore thumbs, Jackie Brown could have done with more integrated, with being more of his own thing. As it is, it pales in comparison to the next year’s Leonard picture, the vibrant, vital, deliriously-scored Out of Sight (Steven Soderbergh hasn’t come close to a film that good since, alas). 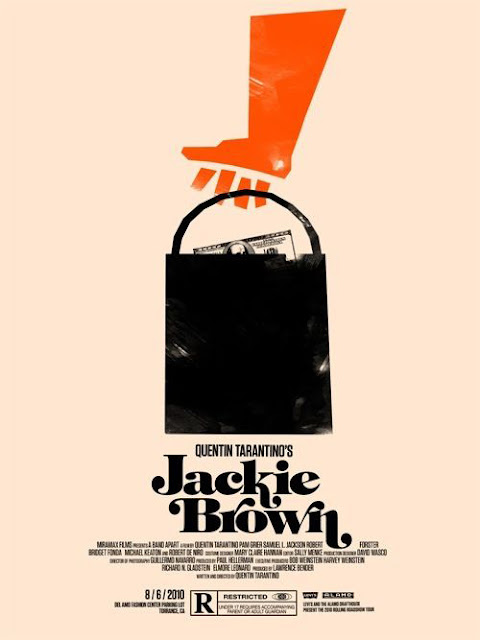 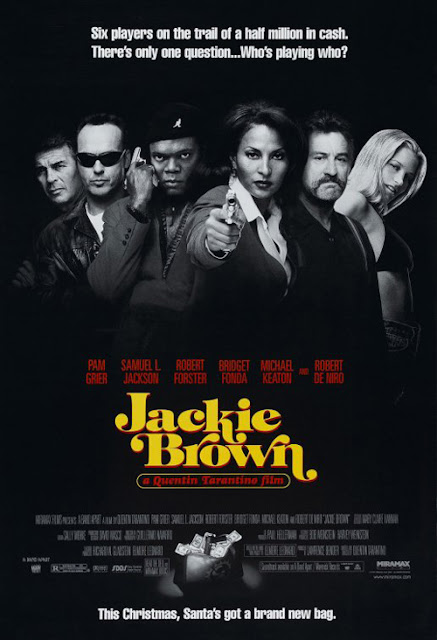