I think the exorcism made the problem worse.

While I’ve seen instalments the original and III a number of times, I hadn’t got round to checking out the near-universally reviled first Exorcist sequel until now. Going in, I had lofty notions Exorcist II: The Heretic would reveal itself as not nearly the travesty everyone said it was. Rather, that it would be deserving of some degree of praise, if only it was approached in the right manner. Well, there is something to that; as a sequel to The Exorcist, it sneers at preconceptions right off the bat by wholly failing to terrify, so its determined existence within the fabric of that film becomes downright bizarre (the relationship is almost like Back to the Future Part II to Back to the Future, but not). Furthermore, it warrants a certain twisted validation for being its own thing, refusing to rehash its predecessor like ninety percent of sequels, then and now, and thus exerting fascination all its own. Unfortunately, John Boorman’s film is also equal parts listless and dull, never as torturously inept and bungled as, say Highlander II: The Quickening, but bearing all the signs of a lash-up from a studio desperate to cash in while simultaneously lacking any real idea of how to do so.

If you regard The Exorcist as the greatest movie ever made, it’s perhaps understandable that you’d see its first sequel as the worst (stand up, Mark Kermode).  I have some sympathy with John Boorman’s reasons for turning down the chance to direct the original, however. He found the story “rather repulsive”, which is probably why it suited William Friedkin down to a tee; Friedkin notably referred to Boorman as “a dumb guy” after seeing the sequel, although it’s unclear if this was before or after his post-Sorcerer career had fizzled into abject mediocrity. The Exorcist is an extremely well-made, very scary movie, but beyond the capacity to terrorise, there’s little lasting thematic resonance to Friedkin’s bag of tricks. I can at least appreciate Boorman’s high-minded aims for the sequel, even if he failed to carry them off. His “metaphysical thriller” eschewed a return to the “torturing a child” that was the original, which was undoubtedly what audiences were expecting, instead opting to explore the relationship between good and evil through the dualistic constructs of religion and science.

William Goodhart’s screenplay, heavily rewritten by Boorman and Rospo Pallenberg, picked up on the inspiration for Father Merrin, Pierre Teilhard de Chardin (Richard Burton’s Father Lamont even name-checks him at one point), who balanced the theory of – creative, rather than Darwinian – evolution with his own religious beliefs, and the concept of the noosphere. The noosphere represents the latest phase in the development of the Earth, whereby humankind’s consciousness and interaction yields a transformative effect on the planet. Love would be the ultimate driving force in this process, leading to a universal Omega Point (the doctrinal Second Coming).

This kind of flirtation with pseudishness is right up my street – or haunted steps; which were recreated on a soundstage for The Heretic, as filming permission was denied – as far as movie material goes. William Peter Blatty had notably greater success integrating overt religious philosophy in Exorcist III, in spite of interfering studio edicts. The problems that mangle Exorcist II probably derive from its genesis as a low budget cash-in set to interview the main players of the original, since this is retained with Father Lamont – William O’Malley was unable to return as Father Dye – investigating whether Max von Sydow’s Father Merien was a heretic (and indeed, sympathiser with Old Nick himself). It’s a premise that feeds too overtly on the carcass of Friedkin’s film, resulting in a picture continually burdened by looking backwards at its predecessor as it struggles to plough forward with its own distinct leanings. Again, The Exorcist III did a much better job of referencing the history of the series while addressing its own distinct themes, which, like Heretic, focus on a man questioning his faith.

It might have been better to cast aside Linda Blair’s Regan altogether, and so strike out in an entirely concerted, considered direction. After all, they had von Sydow on board, and his questionable stature had been placed firmly at the core, and in the title, of the sequel. As it is, though, The Heretic comes across as if every element is designed to get the backs up of fans of the original. There, the core element was the reality of demon possession; it struck such a chord because it was palpable. It put the fear of God (or Pazuzu) into audiences.

Now, Linda Blair’s back, the demon child, the corrupted precious innocent, but she’s refusing to don possession make-up, and her acting deficiencies – possibly coke-fuelled, it would explain the silly dippy grin she’s wearing throughout – are as foregrounded as her mammaries. On top of this, the picture takes delivery of a sci-fi gizmo that makes Brainstorm look like cold, clinical reality, as Louise Fletcher’s Dr Tuskin hooks Regan up to a synchronizer by which the shared mind can allow a connected party to experience the other’s thoughts (and thus the original’s possession scenes).

I didn’t mind this subplot, actually. It’s such an unabashed distillation of the era’s predilection for the crossing over of science/ and New Age thinking (there’s even spoon bending on display), but it further ensures any lurking sense of original’s horror shrinks into the background. Boorman appears to consciously shy away from anything really spooky; about as chilling as we get is the possessed Regan coming into view through a distorted mirror effect.

Given that Regan is now to be the “good locust” (Pazuzu being the demon of the air), a Neo-esque chosen one who can heal others, the demon wants to destroy her. Likewise, James Earl Jones’ Kokumo when he was younger; Jones wasn’t even credited at the time for the iconic work he undertook on another film released in 1977, of course. Regan’s thus retconned as a special person rather than just an average afflicted pre-teen (so it couldn’t be you, or your family, that got picked on by Pazuzu).

As a consequence, a number of sequences play out on a different plane of existence. Notably, the dual Regan finale, in which Father Lamont is on the receiving end of anything the Warner Bros special effects department can throw at him. This is a damp squib, an attempt to compensate for the lack of Regan even being possessed during the main body of the film. It lacks even the genuine sense of the surreal found in Lamont’s earlier encounter with Kokumo.

This sequence, the most engaging in the film (not all that hard, admittedly) finds Father Lamont seeking out Jones’ character Having called on Pazuzu to show him Kokumo, he discovers him in the mountain caves where Merrin exorcised him, wearing locust headgear, only for Lamont to then find himself speaking to Kokumo the scientist, studying locusts in a lab. It’s an idea Boorman would return to in a more fully developed form with Percival’s Grail travails in Excalibur, the vision quest being one of indefinite materiality. Unfortunately, Heretic rarely manages to coalesce its ideas in such a pleasing manner. It’s fractured and fragmented, making Pauline Kael’s response surprisingly positive and almost laudatory:

Kael: The picture has a visionary crazy grandeur… a swirling, hallucinogenic, apocalyptic quality… The film is too cadenced and exotic and too deliriously complicated to succeed with most audiences… There’s enough visual magic in it for a dozen good movies; what the picture lacks is judgement – the first casualty of the moviemaking obsession”.

I’d argue what it lacks more damagingly is narrative propulsion. Boorman leaves the picture sitting there, apparently incapable of meshing its constituent parts into a palatable whole. Kael’s completely right regarding the visuals (William A Fraker also lensed ’60s classics The President’s Analyst and Rosemary’s Baby, as well as 1941 for Spielberg), and the sequences in Africa are strange, exotic and unknowable, lent the same kind of mythical lustre Boorman would later bring to Arthurian Britain. Dr Tuskin’s lab is striking in a different way, a movie-world parlour of windows, reflective surfaces, and hermetic safety (and dawn rooftops).

Yet the interactions between Lamont and Tuskin never translate as more than rote. None of the main performers manage to wrestle the material into something engaging. Fletcher is curiously passive, and the challenges to science and faith fall rather flat. Burton definitely isn’t at his best here. I wouldn’t get carried away slating him – as it seems those experiencing his acting here can’t help but do, amid reports of his drunkenness during the shoot – since his oversized ham ought to be strangely appropriate to the picture’s portentous notions. But somehow, he just flounders.

Mainly, though, Boorman falters through throwing his grand theme out there (“Does great goodness draw itself to evil?”) without the clarity to assemble a commanding narrative from it. The locust footage offers some nice squirmy close ups and swarmy skies, but it isn’t even really very ominous. Scorsese defended the picture, preferring it to the original and comparing its main theme to the Book of Job (on those grounds alone, Damon Lindelof probably loves it). But strong underlining ideas rarely excuse poor delivery. Apparently, Kubrick was offered the picture and believed the only way to do it would be to make it more graphic and horrific than Friedkin’s. Boorman is to be congratulated for not going that way, but he has failed to synthesise his ideas (conversely, Blatty made a movie with some at-least-as-memorable horror moments as the first film while also leaning against the more overt).

Not in his hurried post-release re-edits either. Boorman was sick during the picture’s making, and Pallenberg apparently directed key scenes. However, his reasons for trimming the picture were the disastrous audience reactions (reactions that did not improve). About the only roundly admired aspect of the picture is Ennio Morricone’s score, and even that has its detractors. Kim Newman, often a sense-speaker in these things, noted that, for all its failings, Exorcist II: The Heretic “does manage to be very interesting”. I’d certainly agree with that, at least when it isn’t succumbing to dramatic inertia. Heretic is both a striking and torpid picture, a combination you’d find difficult to pull off if you tried.

It was of course, a box office failure… Well, compared to the original. In today’s money, it made about $120m in the US: quite respectable. Just not so much in comparison to the almost $900m made by Friedkin’s film. Short of Mel Gibson directing a (or another) religious horror movie, I suspect that’s well out of reach for the genre today. As for Boorman’s career, some direct scorn at Zardoz, but that picture knows exactly what it wants to be. Exorcist II is probably the only resounding stinker of his career (albeit there have been other definite failures), but at least it manages to be an interesting stinker. 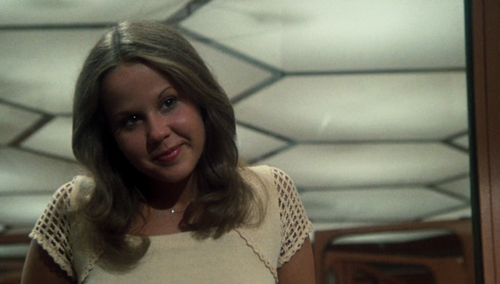 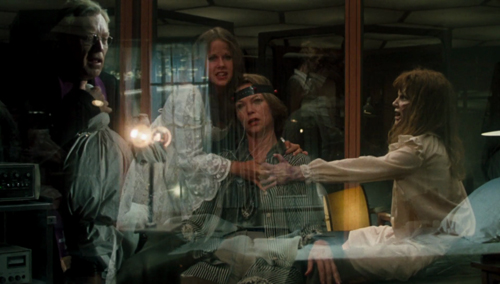 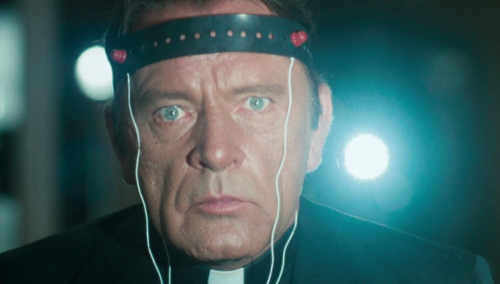 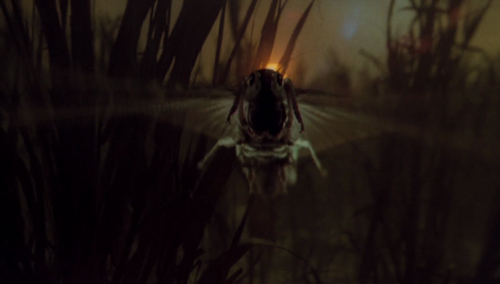 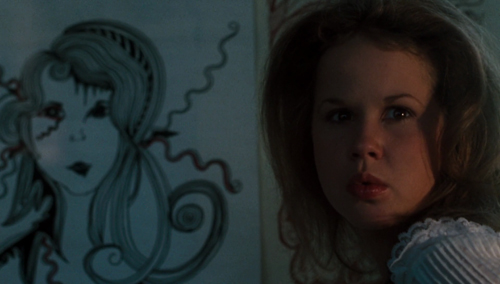 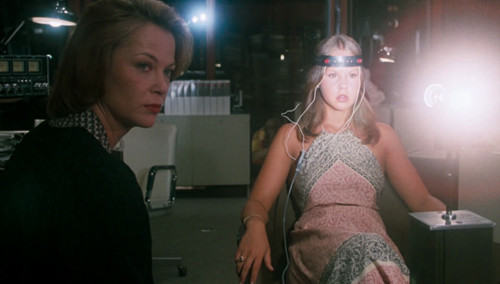 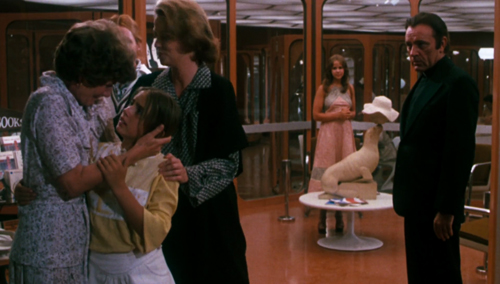 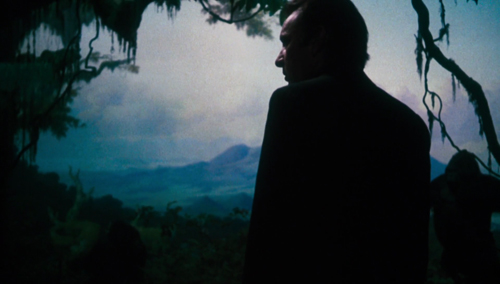 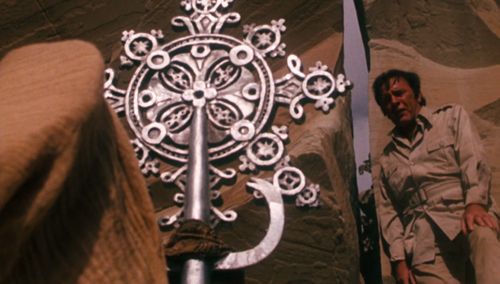 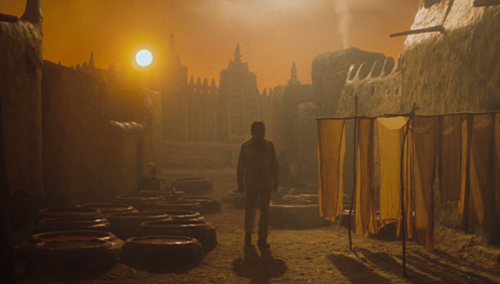 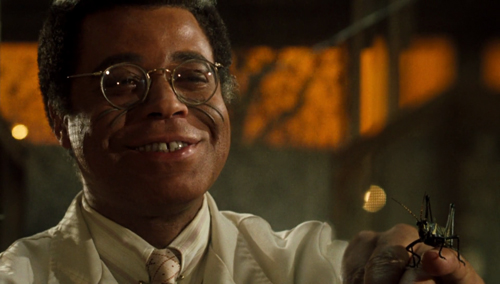 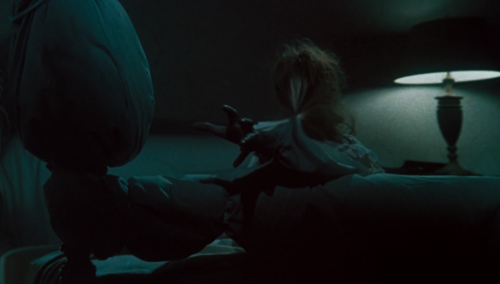 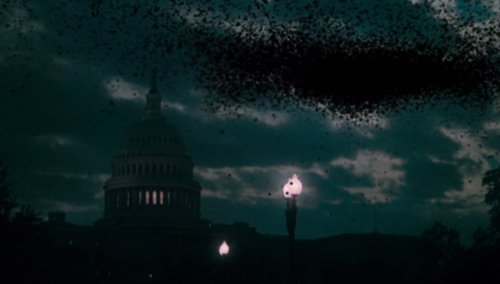 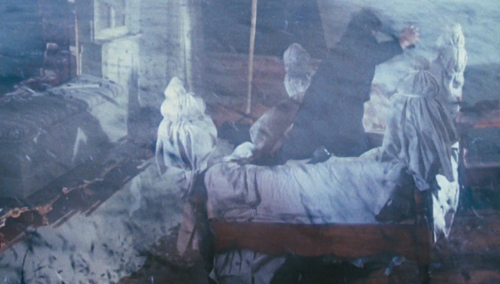 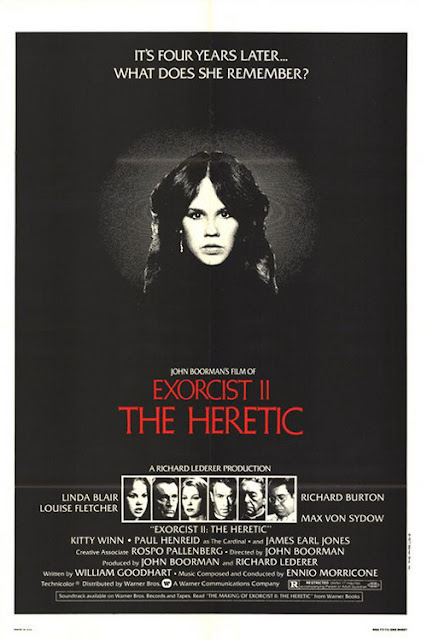 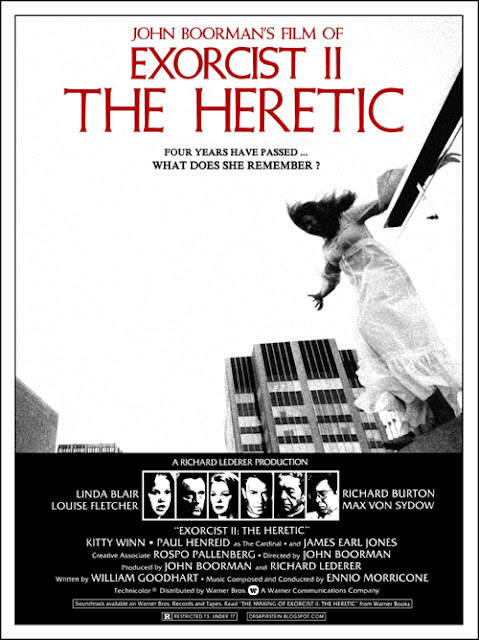