I need to believe we didn’t treat him like trash.

Something isn’t quite working with regard to these valiant attempts at servicing the interpersonal histories of Mulder and Scully. I suspect the root is that this mini-season finds itself caught between two stools. Determinedly resuming the format for which the series was best known (monster-of-the-weeks book-ended by the conspiracy arc), it’s constantly checking itself, aware that this is an “event”, and business-as-usual is a lie, irrespective of whether Mulder assures Scully “Back in the day is now”. In Home Again Glen Morgan sandwiches one of his more thoughtful ruminations about loss and mortality between a crudely-fashioned killer plot concerning a crudely-fashioned killer. The result is neither fish nor fowl, and seems to confirm that the only X-Files veteran able to find his feet in 2016 is the one who least contributed to the show originally (Darin Morgan).

Morgan’s episode is well shot at any rate (surprisingly, this is his first TV work, having directed two features since the show’s original run), the highlight being a Trash Man stalk-and-slaying set to Petula Clark’s Downtown. Although, that perhaps isn’t the most innovative choice of tune, having cropped up on both Seinfeld and Lost (now that was a series with a facility for exceptional music cues). Unfortunately, Morgan has bolted together two ideas that don’t really want to mingle. The Band-Aid Nose Man is a sort-of-Golem for the disenfranchised, righting wrongs by slaying anyone who has it in for the Philadelphian homeless. On the one hand, the sight of this snotty-worm-ridden fellow climbing into a refuse truck compactor is quite arresting, on the other Morgan seems to think his nebulous, cock-eyed non-explanation for its activities is quite sufficient; it’s enough that it dovetails thematically with the Scully plotline.

He’s half-right. I half-liked that the monster isn’t the result of some science experiment or hazardous waste gone awry, but is flat-out metaphysical. Its unwitting Trash Man creator (punk rock musician Tim Armstrong) is even instantly beleaguered by a classic bit of Mulder theoretical combativeness as the FBI agent pedantically takes apart the idea that Buddhism gives any substance to the notion of thought forms being given substance. But the powers of the Trash Man are left vague, as if Morgan couldn’t be bothered to flesh them out (has he just materialised a Watchmen smiley with his last sculpture?); “I made them, I didn’t mean to, but I made them”. His basement appears to be awash with creatures manifested from his id, but the writer-director has no apparent interest in exploring this idea further, abruptly wrapping things up soon thereafter.

It’s unfortunate too that the homeless issue is addressed in such a carefree manner (some of the plot transitions are also glaringly transparent; witness the meal made of Mulder announcing he will examine the graffiti, just so he can get a plaster stuck to his shoe). Initially it’s a nice touch to discover that not only the redeveloper (Daryl Shuttleworth as Daryl Landry) but also the woman protesting him (Peggy Jo Jacobs’ Nancy Huff) are out only for their own self-interest (she doesn’t want the problem moved to the doorstep of her school). But then we get Mulder preaching platitudinously from the moral high ground (“What I don’t hear is who speaks for them?”).

Ire is later reserved for those who would thrive off the homeless (profiteering graffiti makers; riffing on the industry springing up around the Banksy-esque Trash Man), but is Morgan’s shallow hijacking of the issue much better? Lip service is also paid to matters of ecology (plastic in landfills), but such cherry-picking of causes tends to make the makers seem rather out of touch with it all, typing away not-so-furiously from the comfort of their Hollywood mansions.

Morgan, who with James Wong was responsible for more meditative original series episodes including Beyond the Sea and One Breath, does significantly better with Scully’s plotline concerning her ailing mother languishing on life support. Here too he doesn’t feel the need to solve all the mysteries he poses, but it comes across as much more fitting (“I don’t care about the big questions right now, Mulder. I just want one more chance to ask my mom a few little ones”). We don’t know why Margaret Scully (Sheila Larkin, returning to the role) amended her living will to prevent resuscitation, although Scully deduces she asked about estranged son Charlie because “she wanted to know before she left that he’d be okay”, and her last words concerned William in order to ensure she and Mulder were duly responsible for their son.

Mulder looks duly constipated throughout her outpouring, although I liked his sincerity when she first hears about Ma Scully. There’s an attempt to bring together the two storylines as Scully parses that the Band-Aid man is Trash Man’s responsibility just as William is hers and Mulders, but it’s rather over-didactic. And the last line on the subject is abjectly abysmal, as Morgan pulls a “Did you see what I did there?” when Scully surmises “I need to believe we didn’t treat him like trash”.

I doubt such diligence was on Chris Carter’s mind as he devised this mini-season’s grand design. While the focus on William might be seen as an apologia for making such a hash of things with the Mulder/Scully coupling and its repercussions first time round (“You are responsible, if you made the problem“), the truth is more likely that he couldn’t think of anything better as a hook. He really should have pulled out all the stops to make this must-see TV, to prove to those who dismissed the second movie that he could still knock the show out of the park when it counted. Instead, he seems to be letting the whole thing lollop along without a care in the world. The broader, ongoing story ought to have been a compelling, robust, and evidencing through its approach to character that he grasps the dynamics of the best of modern TV (remember when The X-Files was the best of modern TV? Now it looks nigh-on antique). Like the considerably younger nu-Who, the show has stagnated through the presence of past-their-best hands with nothing left to give to it.

As one who appreciates a good “real world” conspiracy, I was attracted by comments that the series’ return is in aid of engineering a partial disclosure narrative concerning the whole UFO/ alien/ suppressed technologies shebang.  I suppose, if those contributing to the series were presented with a remit, it might at least explain why they’re guilty of such sloppy writing. While the idea of human-posing-as-alien sanctioned abductions has gained currency of late, it’s curious that shows cited as playing this disclosure game (Stargate SG-1, Person of Interest) hardly represent the vanguard of quality storytelling. Perhaps that’s the perverse intent; dismiss a show as pap and so the message seeps into the greater consciousness with nary a murmur. Notably, alt-paradigm-weaver extraordinaire Ben Fulford reported (according to his usual Pentagon sources) that Fox “has been ordered to reboot The X-Files program to reveal truth in plain sight about alien technology, free energy, anti-gravity, 9/11, NSA, depopulation etc”. He added that Bush cancelled the show “to prevent it from exposing 9/11”.

I guess Mulder’s list of conspiracy subjects in My Struggle might be seen to qualify as the “truth in plain sight”, but one long-winded Mulder paragraph seems hardly worth the effort. The X-Files production narrative as presented by Fulford suggests a coherent, consistent series that knew exactly what it was doing (such clear intent and firm control being common/crucial to most conspiracy narratives, easier to assert after the fact), something the show had sacrificed all pretence at by the fourth or fifth season. If one were to accept the principle of such design, one would also have to accept intentional obfuscation (and where’s the line between that and sheer incompetence at telling a story?)

Anyway, Morgan may not be at the top of his game plot-wise, but he still sets up a few quality gags. Mulder and Scully investigating “spooky” cases is mentioned, and Mulder enjoys himself pointing out the absurd nature of the crime scene (“Which is impossible, by the way” he says of the toeprint-free evidence). A head has been dropped in the trash, “Not even the proper recycling bin”, and he greets the arguing Shuttleworth and Huff with “And who are these two fine representatives of the City of Brotherly Love?” Maybe jokes are the only way forward (some of them casting a favourable reflection on the new, such as Morgan calling this Home Again to make fans think it was a sequel to the classic Home), as telling it straight doesn’t seem to be doing the trick any more. Scully observes at one point, “You’re a dark wizard, Mulder”. It’s a shame the showrunners aren’t. 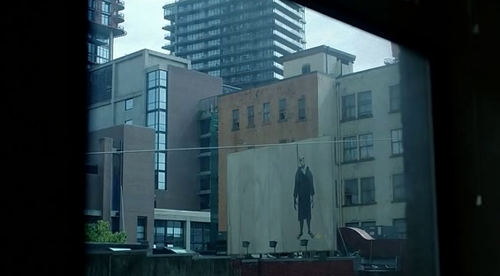 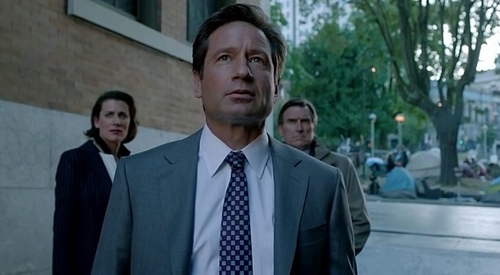 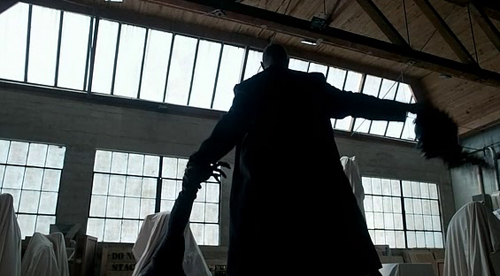 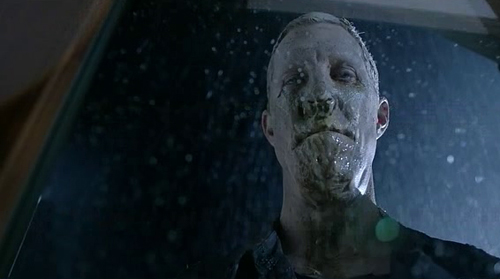 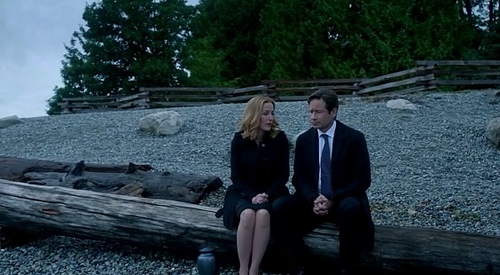