I am you, and you are me, and we are here. I am the dreamer. You are the dream.

Whitley Strieber’s Communion: A True Story was published in 1987, at which point the author (who would also pen Communion’s screenplay) had seen two of his novels adapted for the cinema (Wolfen and The Hunger), so he could hardly claim ignorance of the way Hollywood – or filmmaking generally – worked. So why then, did he entrust the translation of a highly personal work, an admission of/ confrontation with hidden demons/ experiences, to the auteur who unleashed Howling II and The Marsupials: Howling III upon an undeserving world? The answer seems to be that Strieber already knew director Philippe Mora, and the latter was genuinely interested in the authors’ uncanny encounters. Which is well and good and honourable, but the film entirely fails to deliver the stuff of cinematic legend. Except maybe in a negative sense.

Strieber professes dismay at the results, citing improvised scenes and additional themes, and Walken’s rendition of Strieber, protagonist (“If the shoe fits”, the actor responded when the author said his performance was unhinged). Certainly, Mora is frequently tone deaf (or visually impaired) in his choices, not just in depicting the phenomena themselves, but also the hugely inappropriate Eric Clapton guitar score, one that belongs in a swaggering neon ’80s cop show (to give Clapton his due, his work on Edge of Darkness four years earlier is justly celebrated).

Communion perished at the box office, taking in less than $2m. Worse, it was roundly ridiculed, even by critics usually enamoured of Christopher Walken’s particular brand of quirk (it’s fair to say that, whatever Strieber actually experienced, they should have been more fearful of Walken/Strieber than he of them). The novel itself was memorably mocked by the greatest of all The X-Files contributors, Darin Morgan, in his exemplary episode to end all episodes, Jose Chung’s ‘From Outer Space’ (compare the covers below).

The book received much attention at the time, reaching Number One on the non-fiction New York Times Best Seller list and selling two million copies (Transformation, the follow-up, from which the movie also takes material, was banished to the fiction charts, seemingly in response to the less than charitable reception of Strieber’s claims). It became something of a gatekeeper to the alien abduction phenomenon, an accessible way into such material if one didn’t wish to plough through Linda Moulton-Howe’s great swathes of cattle mutilations, even though Strieber himself was non-committal on whether these were actually extra-terrestrial encounters. Strieber would later take in the gamut of ongoing encounters stemming from childhood, crop circles, parallel universes and time travel in his attempts to makes sense of his drastically rearranged paradigm: in all, a pretty comprehensive medley of high strangeness.

Strieber: Was there an owl in here last night?

Although, curiously, David Lynch’s (and Mark Frost’s) Twin Peaks would explore the occult connections between UFOs and sinister, wooded environments just over a year after Mora. As such, it forms something of a natural next step between the two (although, X-Files’ over-arching scepticism is not so much all-inclusive as increasingly blighted by lacking any semblance of internal continuity). Spielberg’s Close Encounters of the Third Kind had transmuted the unnerving aspects of UFOs into a cause for celebration. E.T. the Extra-Terrestrial compounded that.  Come the end of the ‘80s, and the phenomenon was paraded in much less benign clothing.

Both Communion and Twin Peaks feature abductions from woods, unsettling goings-on in remote cabins, missing time, damn peculiar dancing and owls. The owls are not what they seem, and their eyes are oft-paralleled with the visage of the classic grey alien. One can only imagine how much more respectfully Communion would have been received had it been filtered through a Lynch-like vision, rather than Mora’s (although, given how dissatisfied Strieber was, it would no doubt also have found disfavour)

Anne Strieber: You were frightened by a Halloween mask.

The occult connection also features in the Halloween celebrations. One might note – apropos of something or nothing – that Walken wears a miniature trunk on his nose prior to hallucinating a guest as a mantis alien; elephantine aliens are referenced in both the recent Corey Goode material and the Wachowskis’ Jupiter Ascending (the latter being another case of, if this is really purported disclosure material why are the disclosers hell-bent on depositing it in ropey fare no one wants to see… Oh). Then again, there’s a Mr Elephant Head in a spacesuit in Alien, until he turned out not to be three decades later. The Halloween/mantis is actually one of Communion’s rare strong moments, as is Walken witnessing a bus full of insects (“It’s an ambush!”).

Recent conversation has focussed increasingly on alien abductions as the work of human interlopers (while not dismissing the alien component), although The X-Files got in there quite early on (Jose Chung’s, with its human dressed as an alien having a cigarette; cigarette odour also form part of Strieber’s observed abduction data), with the renewed X-Files posited by some as paving the way to disclosure. It’s interesting to look at Communion through such a lens, as little here would disagree with the human interpretation (although I’m unsure quite where the blue midgets fit).

It’s very noticeable that the greys in Mora’s film appear mask-like (or inflatable…); when Walken removes one’s “visor”, a reptilian form lurks beneath (“Is there something under that, because I don’t believe that one?”) Strieber comments “It’s like um, a box, a Chinese box” and concludes of the Grey, “You’re not going to let me see you, are you?” The author has gone into some detail about his associations with, and distrust of, the CIA (“a satanic monstrosity”), and his childhood intelligence testing, so, whether consciously or not, he appears to have pieced together an interpretation of the puzzle; possibly he just completed it upside down.

Strieber: I think they gave you a gift. Better use it.

Ultimately, though, what may or may not be a nefariously manufactured experience (by persons taking Strieber away throughout his life, ensuring it becomes a generational thing), is given a positive spin in terms of personal transformation. Certainly, within the movie narrative, the protagonist’s writer’s block is untapped (“I’m going to write about this, us”) and in reality, it has been a career windfall for the author (one might propose that “whoever it was” picked him for precisely this reason).

The therapy scenes enable wife Anne (Lindsay Crouse) to affirm that the experience was at least partly shared, and, anchored by Frances Sternhagen’s sympathetic shrink, these at least have a degree of substance (generally, the picture is very well cast, with Andreas Katsulas also appearing as jittery friend Alex; Katsulas went on to play reptilian ambassador G’Kar in Babylon 5, a series its creator Jean Micheal Straczynski furnished with an alien race called the Striebs).

Strieber: I am you, and you are me, and we are here. I am the dreamer. You are the dream.

The biggest problem with Mora’s direction isn’t his circumspection regarding the materiality of Strieber’s encounters. Rather, it’s that his complete lack of flair with the experiential sequences unravels the is it/isn’t it real component. There’s a desperate shortage of imagination here, so, while as viewers we don’t necessarily buy into the temporal lobe epilepsy explanation, it’s his wife’s corroboration under hypnosis rather than unintentionally hilarious flashbacks that encourage us to think something quantitative may happened.

Likewise, Katsulas recalling strange tales (“In the mountains there are many mines. Strange men were seen, little and tough. They were called kobolds, the people of the lower depths”) is much more evocative than the “reveals”’. The flashbacks only detract from and mock the message, and it’s easy to see why Strieber would want to disassociate himself from the results. 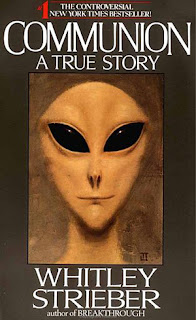 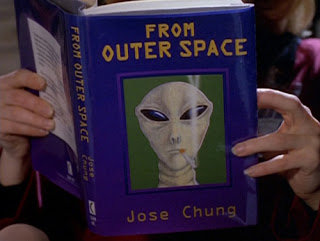