Do you think I should confess? To what? Committing masterpieces?

Orson Welles’ F for Fake is in some ways be the obverse of Citizen Kane; so shoestring, much of it comprises re-edited footage from Francois Reichenbach’s documentary about Elmyr de Hory, it hardly compares to the opulence and majesty of his most famous picture. Yet those who know it well tend to set it on high as one of his greatest works, fit to share the same podium with the popularly proclaimed “greatest film of all-time”. That’s likely partly because it’s a “pure” piece, untampered with and thus thoroughly Welles. It’s also the director at his most cheerful and disarming, delivering a film “about trickery, about lies”, in which nothing can be trusted, but it can’t be trusted in a manner highlighting its director’s genius both as an editor and the embodiment of a charismatic, witty bon vivant.

“Is any of this real?” must come the inevitable question. Welles tells us “During the next hour, everything you’ll hear from us is true and based on solid facts”, directly after he has informed us upfront that this is a film about pulling the wool over eyes. At about the eighty-minute mark, Welles reveals, that “for the past seventeen minutes I have been lying my head off” but it’s highly likely he’s been doing so for the duration (“Why not? I’m a charlatan”), be it verbally or through his proficiency with the splicing process. Among the picture’s fans was the late great Robert Anton Wilson, who devoted several chapters of Cosmic Trigger III: My Life after Death to its inscrutability. It’s easy to see why it attracted RAW, engaged as it is in a continual process of establishing and breaking down paradigms formed between the filmmaker and the viewer.

Jonathan Rosenbaum, in a piece on the Eureka! DVD release, speculates the picture was formulated at least partly as a response and rebuke to film critic Pauline Kael, who a few years before had engaged in a hatchet job of Welles over what she suggested was his attempt to steal credit for the Citizen Kane screenplay from Joseph Mankiewicz. F for Fake is a piece in which the edifice of art snobbery – of which Kael may be viewed as a symptom – is called into question, but it proffers this notion with a twinkle in its eye and a taunting grin on its face; “All the world loves to see the experts and the establishment made a fool of” we are told. It is these experts who, according to Clifford Irving (author of Fake!, all about de Hory) have verified hundreds of Elmyrs as the original works of the artists he has imitated. Irving goes further “It’s not so much whether it’s a real painting or a fake. It’s whether it’s a good fake or a bad fake”.

Which, of course, is heresy to experts; it would be curtains for their livelihood. Irving himself is counted among the ranks of fakers, thanks to his fabricated autobiography of Howard Hughes (the subject of Hoax, a recent, not bad, movie starring hamster-loving Richard Gere as Irving). This saga had been occurring concurrently with Welles “documentary”, leading him to pose the conundrum of “the author of Fake!, a book about a faker, was himself the author of a fake to end all fakes”. Which, Welles testifies, as if butter wouldn’t melt in his mouth, he “must have been cooking up when we were filming him”.

Certainly, the man who three-and-a-half decades earlier had unleashed his own fake, in the form of a panic-provoking War of the Worlds radio broadcast that led to many tuned-in Americans believing the Martians had landed, is not beyond reproach in such things. He even modestly, but “honestly”, recaps his own history as charlatan in F for Fake, essentially admitting to being one steeped in the art of artifice. He contributes tall (apocryphal) tales regarding Welles wearing shoe boxes around the top floor of a Vegas hotel and having ham sandwiches delivered to a tree, while casting doubt on the entire construct of Elmyr (“Elmyr is a fake faker”).

The picture is littered with wonderfully double-edged verbiage and witticisms, from Elmyr’s “I don’t feel bad for Modigliani, I feel good for me”, to “He gave us a false cheque, for a false painting”, to an amusing tale regarding Picasso labelling one of his own paintings a fake and being called out on it (“I can paint false Picassos as well as anybody”), to Welles chronicling the passage of time in which he “took another plane, grew another beard, made another movie”.

Welles even parodies his own gastronomic weaknesses, setting a scene around his ordering umpteen courses and telling Hungarian cookbook jokes (“To make an omelette, first steal an egg”). His easy-going spin accompanies the editing process very naturally, and as such it’s a dazzling piece of work, and very musical to behold.

We can see the games he’s playing from the off, in which his partner Oya, a lover of Picasso (not), is actually played by her sister (although we don’t know this), and the art of montage enables copious men to be distracted by her shapely figure as she walks along a busy street. Welles spent a year editing the picture, and it shows in the most complimentary of ways. Later, he teases out an “apparent” action-reaction between Elmyr and Irving as Elmyr attests he never signed a name on the paintings (so they weren’t forgeries). Cue a series of cuts back and forth between the two, with Irving finally claiming “The paintings had signatures”. F for Fake’s playful, pop sensibility wasn’t particularly common to documentaries hitherto, but in the time since has become commonplace, awash in everything from Michael Moore to Adam Curtis.

Most of all, above its sharpness and shrewdness, F for Fake is a lot of fun, digging into a subject it knows cannot reveal itself, so perversely encouraging its obscurity. Welles later said “Everything in that movie was a fake”. Well, except for Welles’ bravura as a filmmaker. 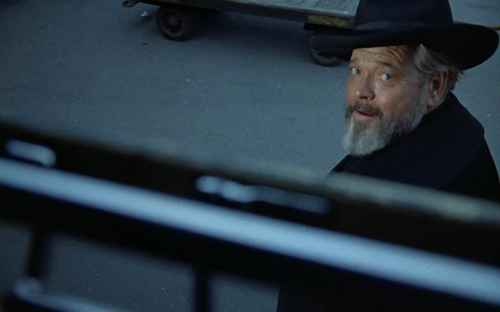 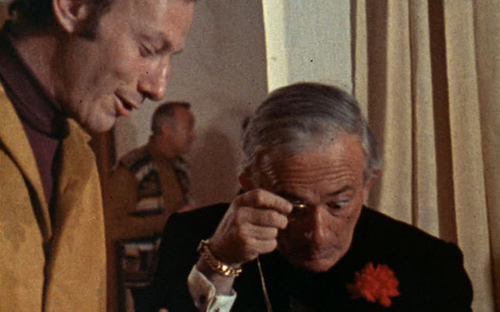 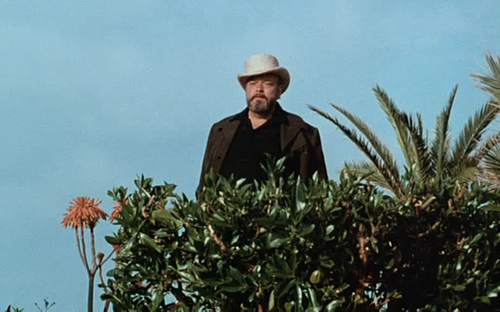 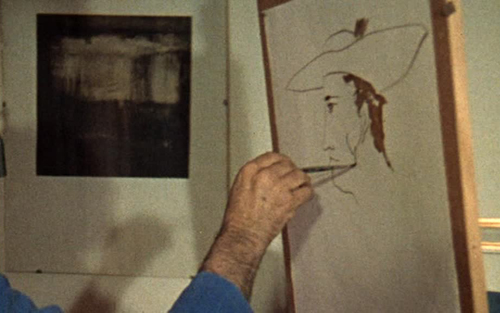 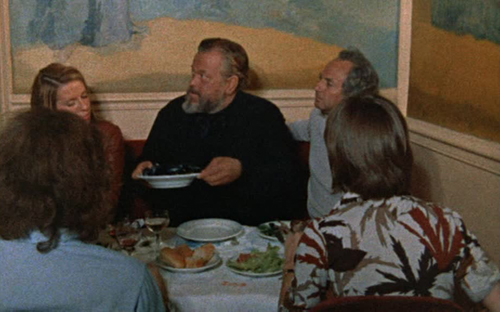 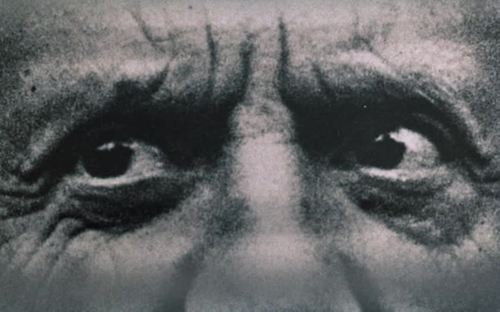 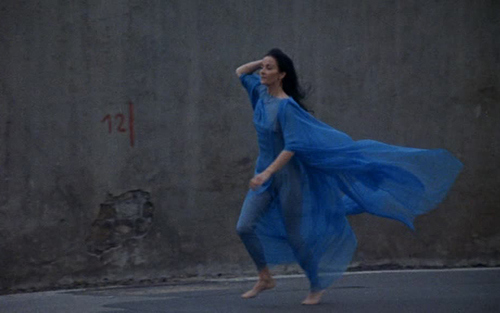 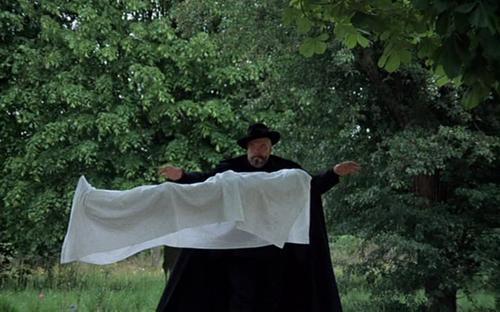 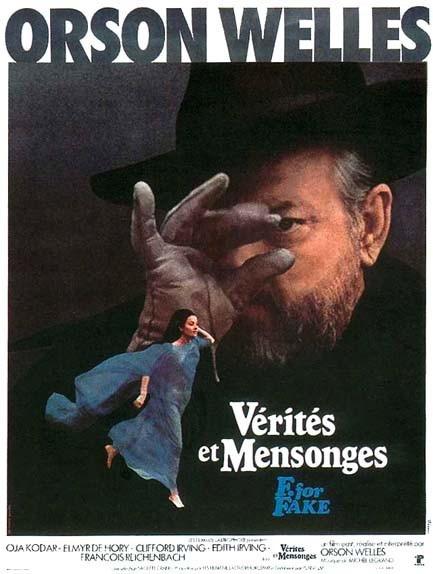