Do you realise what you just did? You just bet against the American economy.

Adam McKay’s adaptation of Michael Lewis’ 2010 book The Big Short: Inside the Doomsday Machine is fuelled as much by admiration as indignation. Not for what this collection of speculators achieved (triggering the 2007 financial crisis, from whence nothing will e’er be the same again, no matter how hard we try to kid ourselves), but for their perceptiveness and acumen. The movie inhabits similar territory to the ruinous financial tomfoolery we saw in The Wolf of Wall Street – highlighting the absence of any semblance of a moral or ethical component within capitalism – albeit it is demonstrably more forward in leading its audience by the nose. But that’s okay, nay essential; it needs to be in order to explain itself. The Big Short takes an unashamedly accessible approach to exposing the seemingly impenetrable underpinnings of the sub-prime crisis and, through the closest thing a movie of if-not-villains-then-questionably-motivated-hucksters has to an arbiter of what went down (Steve Carrell’s incendiary hedge fund manager Mark Baum), expresses acute outrage amid the prevailing mirth of disbelief.

The Big Short fits into that cross-pollinated genre in latter years identified as dramedy, although simply labelling it a straight-up satire might be more helpful. McKay (Anchorman, The Other Guys, which also got stuck into the instigators of the financial crisis, specifically the looting of pension funds; in a sobering end credits animation, it explains Ponzi schemes and furnishes figures for the costs of the crisis on average Joes) is a natural for going broad, what with his “outrageous mind” and all, so this doesn’t have the same deftness and craftsmanship Scorsese brought to Wolf. But then, if a subject deserved a sledgehammer, it’s this one. Even given that supporting player Brad Pitt had taken another Lewis book that was on the face of it unlikely movie material, Moneyball, to significant success (Pitt co-produced both), McKay, adapting with Charles Randolph, only got the go-ahead from Paramount on condition he made Anchorman 2.

Average Joes are barely in evidence in The Big Short. Aside from quick-cut montages, their representative is a dutiful tenant (compounding the injustice of losing his home, his daughter has only just started school; those McKay broad strokes) whose landlord has been failing his repayments. Attempts to emphasise the other side amid the self-involved excitement of the main characters’ gold rush fever is also in evidence when Brad Pitt’s Ben Rickert cuts his young protégées off during their celebrations and chides them to ponder the ramifications of what they have just done. Mainly, though, McKay shrewdly avoids wallowing in the misery the rich getting richer has fostered, simply because he wants people to actually go see his movie. And Carrell’s blistering, apoplectically indignant Baum channels the main message without bringing everyone down, man. Better to reach an audience through anger and laughter than turn them off with despair.

As such, McKay surely looked to his predecessors when planning the picture; Arbitrage took the point of view of a hedge fund manager in dire straits, but limped too far of course into a (not especially involving) personal drama, while Wall Street: Money Never Sleeps was symptomatic of pensioner Oliver Stone’s more recent career; it lacked bite. Margin Call was highly accomplished, heroically making similar efforts to McKay in communicating just what went awry so as to bring down a namesake of Lehman Brothers and Bear Stearns, but not very many people saw it. And it was also an interior piece, told from the point of view of those within the institution; McKay, with his band of nominal outsiders (through ethos, attitude or anti-social personality) takes on the entire financial apparatus. These guys aren’t the good guys (someone might argue the mere act of exposing the corrupt system is heroic, which rather avoids that they are still working within its environs, making – huge amounts of – money), but their eyes are sufficiently open to recognise the truth of the situation before it hits them and everyone else in the face.

Baum’s glum conclusion, following mystification over why no one wanted to do anything about the ticking time bomb, and speculation over whether the activities were knowingly fraudulent or the consequence of straight-up ineptitude, is that the institutions did nothing, when it came down to it, because they knew they’d be bailed out; they simply didn’t care. In an obvious, but no less acute for it, closing statement, Ryan Gosling’s narrator (unscrupulous trader Jared Vennett) informs us how, in the aftermath, hundreds of bankers were sent to prison and the big banks were broken up…

Except they weren’t, only one fall guy went to prison, the poor and immigrants were blamed for all society’s woes (as they always are), and the salaries of those officiating over the mess continued to spiral upwards. Appointing itself harbinger of the inevitable in a system no one flushed out, the film warns that similarly tranched CDOs (collateralised debt obligations) were being sold once more by the summer of 2015. Flash forward to current warnings of a return plunge to the depths of the 2008 crisis are terrorising the headlines, while the future of Deutsche in particular (front and centre in the picture, where Vennett is an employee) is in doubt.

Some have asserted it’s unconscionable that the picture makes its protagonists out to be heroes, but one would have to be very literal minded to see them that way. The picture uses the “hero’s journey” as a tool to make the material relatable. Its cleverness is that these are guys doing “bad things” (to the economy, certainly) yet you’re put in the empathic position of wanting to see the underdogs succeed; it’s irresistible, and a very shrewd push-pull. It may be that The Big Short’s presentation of them as the lone voices is overstated, overemphasising the narrative that no one else could/did see it coming, and it’s certainly the case that stability of the mortgage market wasn’t merely assumed by those within it in the way it is painted here, but it’s an entirely understandable storytelling device.

The closest The Big Short gets to actual veneration is with Baum’s handwringing (and emotive, but rather facile and extraneous, backstory concerning his suicidal brother) over the crisis. But he’s the one who, on witnessing first-hand the flagrant ambivalence towards what is occurring, demands “Short everything that man has touched”. He also ultimately gives the go ahead to proceed with the credit default swaps (in the name of fiduciary responsibility) on hearing a bailout is to be granted, so directly linking the shorts’ billions to tax payer money. One can’t really ascribe Baum (based on Steve Eisman) moral high ground, any more than Pitt’s disarmingly conspiratorial Rickert (based on Ben Hocket), a former JP Morgan trader with his eyes wide open about the system, who, when asked why he did this for his fledgling investors, replies “You wanted to be rich”.

Yves Smith in particular takes issue with Lewis’ portrayal of events, asserting that the action of the shorts drove demand to the very worst mortgages, thus making the sub-prime crisis ten times worse than it would have been otherwise (she also accuses Lewis, and by implication McKay, of paying insufficient attention to the other side of the CDO equation; who the buyers of the bonds were).

There may be something to this, and certainly the pace of developments at the backend of the picture isn’t as measured and easily digestible as the early stages. There, we have Margot Robbie in a bath explaining subprime loans. Some of these layman’s interludes are less helpful than others, however. I found Anthony Bourdain’s analogy of fish stew to CDOs rather obscured matters (essentially poor performing CDOs are repackaged, and repackaged again, and garlanded with AAA ratings), although Selena Gomez and Richard Thaler on synthetic CDOs were clear enough. McKay gets his ideas across through employing something of the pop sensibility Michael Moore has utilised to great effect in his documentaries. Sometimes the seams show (I was gratified to discover the “Truth is like poetry. And most people fucking hate poetry” line was made up by the director, as it reeked of an invented aphorism), but mostly McKay hits his target.

He’s strong both on the idiocy that was the foundation of the crisis (the jock-ish vacuity of mortgage brokers doing their very best to give loans to the most unsuitable property purchasers) and the collusion that allowed the deceit to sustain itself, be it Melissa Leo’s Standard & Poors rep (deciding ratings in order to maintain good relations with the banks), or massaged media (greenhorn investors Geller John Magaro and Shipley Finn Wittrock attempt to tell their story to a New York Times journalist, but he doesn’t want to make waves with his Wall Street contacts, and besides, he has a family to support).

McKay also wrings fine performances from his cast. Carrell in particular is a whirlwind of splenetic fury, and Bale is customarily transformative as the heavy-metal loving, aspergic, monocular Michael Burry, who saw the potential of it all and rung profits of 489% before closing his fund. Gosling brings obnoxious swagger, while Rafe Spall confoundingly essays a nice guy for a change. Lesser known actors Magaro, Wittrock, and Jeremy Strong (as one of the forthright analysts at Baum’s FrontPoint) flesh out the ensemble, while Byron Mann is magnificently vile, gleefully detailing his culpability to Baum before asking what he earns.

Geller pronounces, on the phone to his parents, “It’s the end of capitalism!” although his pronouncement may have come a little soon (but maybe only a little). Certainly, some of those involved don’t, in contrast to McKay’s foreboding closing summary, believe the same thing will happen again (Burry is not among them). Lewis is somewhere in between; while he doesn’t foresee an identical crisis in the near future, he believes the changes necessary to safeguard the system were not implemented (“I think they should have broken up the banks”). Why that didn’t happen is probably more about who really has the power, rather than the one Lewis suggests.

Even given McKay pulling out all the stops to make this populist fare, The Big Short’s success has been modest. It may get a modest boost if it wins Best Picture Oscar, but public interest in subject matter they’d rather not have to think about can only be so attractively packaged. Now, if the film had been able to serve scalps, rather than focus on a situation with no clear end in sight, it might have had had a chance to reach a viewership on All the President’s Men levels. Not that The Big Short comes close to that pinnacle of quality, but so few do. 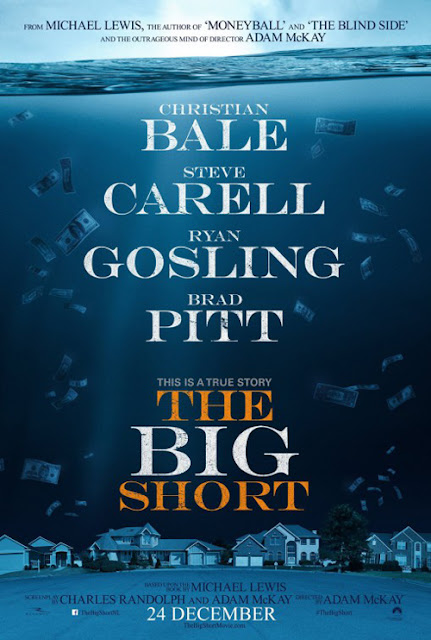