The greatest Disney animation arrived soon after Sir Walt had pegged it, but, given its consistency with, and progression from, Wolfgang Reitherman’s previous Disney entries during the decade, it’s difficult to believe he wouldn’t have wholeheartedly approved. The Jungle Book is a perfect Mouse House distillation of irreverence and sentiment, of modernity and classicism, of laidback narrative cohesion and vibrant, charged set pieces. And the songs are fantastic.

So much so, Jon Favreau’s new version will include reprises of The Bare Necessities and Trust in Me, in a partially motion-captured world that seems (on the surface) entirely at odds with the goofy, knowing tone Reitherman instilled in Rudyard Kipling’s classic. That wouldn’t surprise me, as Favreau’s sense of material has been increasingly erratic since the giddy high of the first Iron Man. Andy Serkis’ competing Jungle Book: Origins (despite the abject misery of its title) will be entirely performance-captured and, while it might be the loser out of the gate, it might also be the more interesting of the two, although neither can boast writers to write home about.

The Jungle Book’s success extended a lifeline to the animation arm of the studio in the wake of Walt’s demise, but it was no salvation; animators now had to deal with mismanagement, dwindling funds and/or disinterest (which would eventually see the likes of Don Bluth depart to set up on his own) until the late ’80s renaissance began (which is not to dismiss some of the interesting pictures produced during that period).

Disney himself had taken a very penetrating tack with the picture, nixing any “heavy stuff” (which included songs from Terry Gilkyson, his Bare Necessities excepted, and a plotline with a hunter) in favour of a practical approach favouring lighter elements over the grimmer original storyboards; the ending changed from Mowgli killing Shere Khan to the familiar one with where fire sees the tiger off, and the animators eventually came around to the Walt-prescribed bittersweet ending in which Mowgli is wooed into man’s village.

The Sword in the Stone hadn’t been the hoped-for success, and Disney was determined to take any means necessary to ensure The Jungle Book would not follow that fate. Such an approach would probably be roundly condemned today (although in many quarters the current trend is to inject grit, rather than follow the original tone) but The Jungle Book becomes a complete reimagining of Kipling, not indulging in half-measures, with a distinct and consistent style and sensibility.

The Mowgli of The Jungle Book is essentially a cypher, a means to for the writers (Larry Clemmons, Ralph Wright, Ken Anderson and Vance Gerry, with Floyd Norman and Bill Peet uncredited) to transition from each colourful character and set piece to the next. It’s a rites of passage tale, except that its main character is largely unaffected until the final scene (and then barely); it’s those he impacts upon who are changed. To this end, the assembled characters are the absolute zenith of Disney design and vocals. It’s difficult to believe such an eclectic cast would be assembled for a version today. And, indeed, just look at the banal suggestions used in the new competing versions (even Bill Murray as Baloo, while perfect, is the most obvious name you could think of).

Shere Khan: I thought you were perhaps entertaining someone up there in your coils.

It’s impossible to choose the standout, although George Sanders’ delicious, superior tones have always held special affection. Shere Khan is the most wonderfully assured, self-satisfied villain, one who doesn’t even appear until after the halfway mark; like Hannibal Lector, he’s an erudite, witty psychopath, given to withering dismissiveness (“No I can’t be bothered with that. I’ve no time for that sort of nonsense” he instructs Kaa as the latter is attempting to hypnotise him) and drollery (“Now I must continue my search for the helpless little lad”).

While Sanders was (something of) a star, he had long-faded by 1967, and the lesson here is to cast for the voice, not the name. Bandleader Phil Harris became a name in animation following Baloo, with subsequent roles in The Aristocats (as the lead), and Robin Hood (as Little John). His interactions with the rest of the cast are perfection, from Sebastian Cabot’s responsible, worried Bagheera, the panther who slowly comes round to Baloo’s way of thinking (and has something of the snootiness of Khan; “Of all the silly gibberish” he comments of Baloo’s signature song) to Louis Prima’s King Louie, where the two bee-bop and scat all over to the classic I Wanna Be Like You (another entry here in the children’s movie tradition of male characters in drag, here with the added spin of a bear posing as an ape). Completing the handful of venerable lead voices is Sterling Holloway’s sibilant Kaa, a good character in the novel but Disney didn’t believe audiences would see a snake as other than villainous.

There’s also J Pat O’Malley, as Colonel Hathi, an effective spin on the pompous buffoonery of the British Empire, doubly so as his wife Winifred clearly calls the shots and Hathi is revealed as a sentimentalist beneath the bluster. Then there are the vultures, original earmarked for The Beatles until John Lennon turned the studio down (one of them is still a scouser, although their barbershop quartet is the closest the picture comes to a sign of obvious revision, altered to accommodate the Fab Four’s refusal).

Reitherman has assembled similar ingredients to the later Robin Hood (including reusing animation) but here it all comes together. There are no idle lulls because, even without a breakneck pace, every scene is captivating on its own terms, and each character interacting with each new character is like a mini-movie unto itself. There’s such a welter of evidence attesting to The Jungle Book as the high-water mark of character, songmanship, vocal performance and, perhaps most significantly, humour, it’s mystifying that the early ‘90s rebirth of Disney (immaculately produced, but rather impersonal, albeit flourishing the same kind of rigorous product control Walt exerted here) receives all the adulation.

Baloo: Come on baggy buddy, let’s get back to where we belong and get with the beat.

And, going back to that ending, it’s one of the best ever. We don’t want the adventures of this trio to stop (and, for all the lightness of touch, the fight with Khan is still delivers dramatic meat, even taking place on a darkened twilight wasteland), and Mowgli moving on represents a resonant life lesson, particularly after all that exuberant fun. Yet it isn’t all sad. Baloo and Bagheera’s bromance is complete; they have each other and, now firm friends, walk arm-in-arm in to the jungle (the latter, not really designed to walk on two legs, never fails to raise a smile). 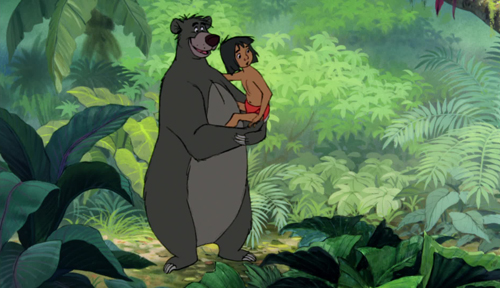 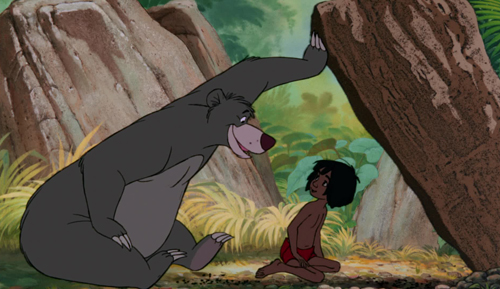 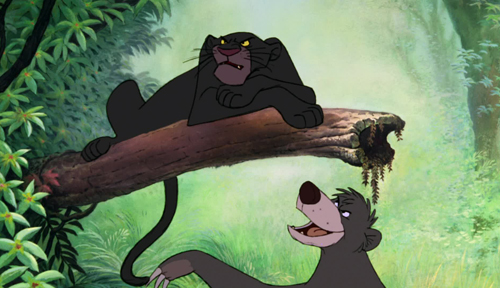 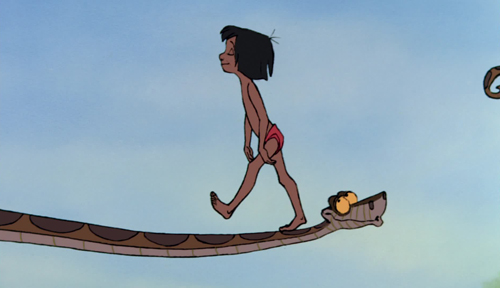 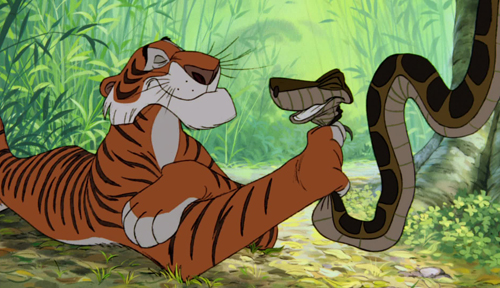 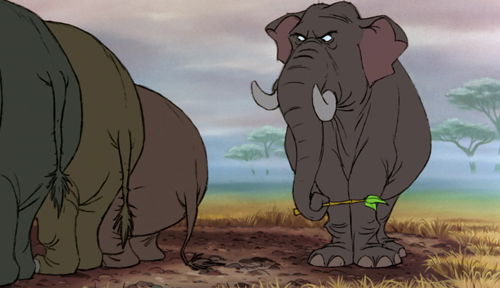 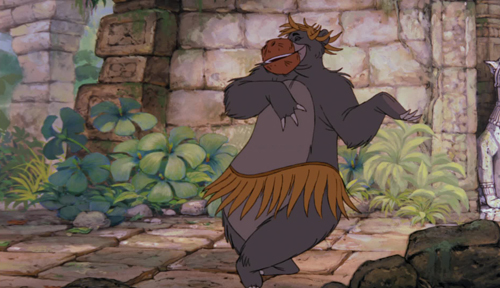 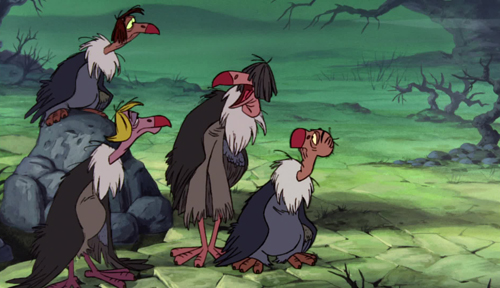 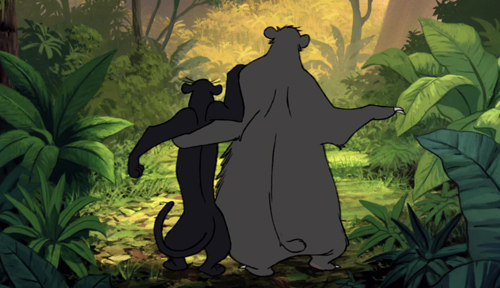 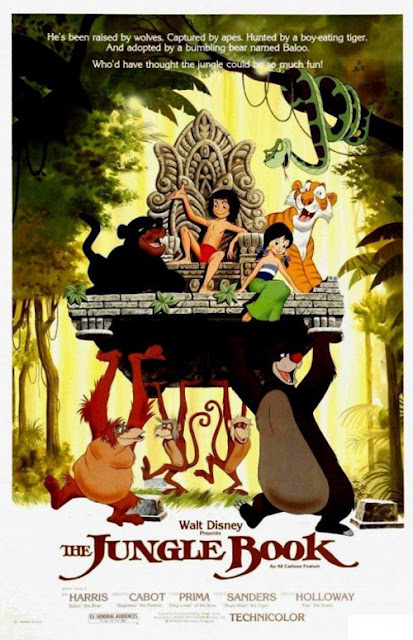 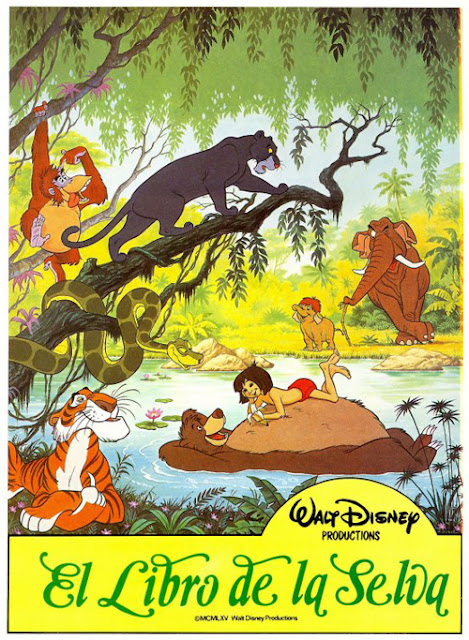