Oh, he’s so handsome, just like his reward posters.

Wolfgang Reitherman is responsible for my favourite Disney animation, The Jungle Book, the last picture Walt Disney was involved with before he died and which, despite being relatively unadorned in comparison with the lushness of the studio’s animations of previous decades, is blessed with superb design work, wonderfully catchy songs (without equal in the Disney canon) and a marvellous voice cast. While Robin Hood, released five years later, can boast another strong vocal complement, and the occasional decent showing in terms of character design (stand up Robin and Prince John), it’s sadly an inferior beast, too often brought down by the tatty, underfunded nature of Disney animations at that point, which it has no choice but to wear on its sleeve.

As a youngster Robin Hood ranked as one of my favourites, probably thanks more to the Nestlé chocolate bars adorned with its characters than its actual content. Reitherman would go on to the better-received The Rescuers (itself indebted to 101 Dalmations for its main villain), which even spawned a sequel, and his work as a director, spanning Dalmations, The Sword in the Stone, and The Aristocats is, depending on where you are coming from, either a vibrant, hipper and more colourful Disney, eschewing the reverence inflicted on the previous couple of decades of fairy tale adaptations, or a tail-off from their golden age. I’m definitely in the former camp, as the period is the closest, barring perhaps The Emperor’s New Groove, Disney has strayed towards the more anarchic Warner Bros attitude.

Originally an adaption of the escapades of French fox Reynard was entertained, until he was decided as a touch too problematic, and Ken Anderson provided design work for Robin Hood that reportedly brought him to tears when he saw what Reitherman had done with it. Certainly, some of the elements here lack a certain something. The Sheriff of Nottingham was to have been a goat, but ends up a rather bland wolf. I wouldn’t have known Friar Tuck was a badger without being told. Perhaps this is because he was originally envisaged as a pig, but the idea was kyboshed for fear of causing religious offence. Little John, like Baloo voiced by Phil Harris, isn’t the bear of his Jungle Book forbear, despite several memorable scenes, and Sir Hiss, although lent the marvellously memorable tones and gap tooth of Terry-Thomas, is a rather lacklustre piece of design, again diminished by how well his Jungle Book counterpart Kaa turned out.

Robin, voiced by Brian Bedford, is agreeable and dashing in a very modern-mannered manner, announces off the bat he and John aren’t bad thieves (“We never rob. We just borrow a bit from those who can afford it”), and appears to run a two-man outfit (budget cuts extending to the inhabitants of Sherwood Forest, it seems) while Maid Marion (Monica Evans) is something of a fox.

But Robin Hood only catches fire when Prince John and Sir Hiss are centre stage. John, a lion, sublimely brought to life by Peter Ustinov, has a yen for taxes (“Taxes! Beautiful lovely taxes!”) and the apt phrase (“Forgive me a cruel chuckle”). And also, a curiously endearing capacity for thumb sucking whenever his mother is mentioned).

As The Jungle Book indebtedness thing goes, Sir Hiss even indulges in a spot of hypnotism. He also has some relishable lines (“A mere slip of the forked tongue, your majesty”) and at one point turns himself into an aircraft, enveloped by a balloon, his tail acting as a propeller.

Highlights include the fortune-telling heist of the King’s money train (for which Robin and John don drag) and the archery tournament, which vibes heavily on The Jungle Book, what with characters in disguise (Robin as a stork, John as gentry) and fraternising with the enemy (John’s Sir Reginald, Duke of Chutney, proves an instant hit with the King, at Sir Hiss’ expense). In between, the picture is curiously formless; one might charitably call it freewheeling, but listless would be more apt.

The tunes, while they have their ardent defenders (as does the picture itself, from a contingent who also grew up on its idiosyncratic charms), and have experienced a significant afterlife, don’t do a whole lot for me (The Phony King of England is catchy, while Roger Miller as minstrel rooster Alan-a-Dale is well-employed in his time-filler introduction, which reuses animation to be seen later). Apparently, the casting of actors best known for westerns (Patt Buttram, Andy Devine, Ken Curtis and George Lindsey) was down to an earlier consideration that Robin Hood would take place in the Old West. Which means it would have got in there with a revisionist take long before Sir Ridder’s Robin Hood (which also re-wrote its reinvention into a more traditional form).

Following on from such behind the scenes changes, if the climax feels rather abrupt that would be down to the excision of the original ending for being too dark. Officially. This was more likely down to budget constraints, since the picture had already fallen prey to animators tracing out sequences from The Jungle Book, The Aristocats and Snow White and the Seven Dwarves for a dance number (although, in the interest of balance, reusing animation from earlier Disneys was common to Reitherman’s pictures). Robin Hood also used various alumni from earlier Reitherman outings. Alas, an all-animal line-up (no humans feature) doesn’t prevent cutesiness from infesting the frame, in the form of soppy wee ickle bunnies.

Because of its readily identifiable similarities with The Jungle Book, I’m always inclined to see Robin Hood as deserving to sit in its company. Alas, while the voice cast includes some of the most formidable presences Disney has utilised, and the picture as a whole is part of a looser, freer and easier, stylistic era, it never amounts to more than the lightest of frolics, with little in the way of purpose or trajectory. Perhaps, if the Disney execs had held the animation division in any regard at the time, it might have ended up a much-celebrated classic. 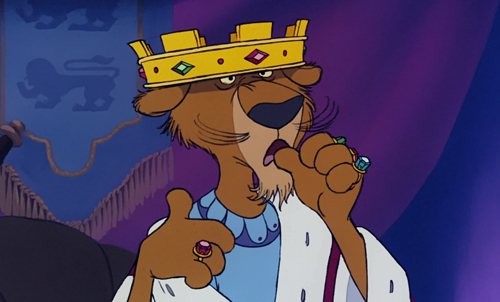 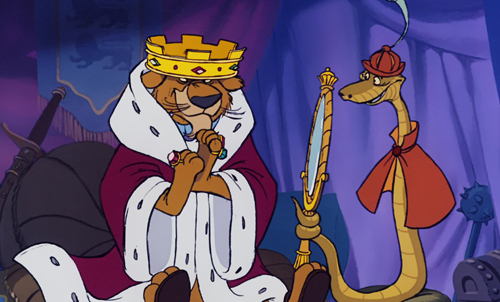 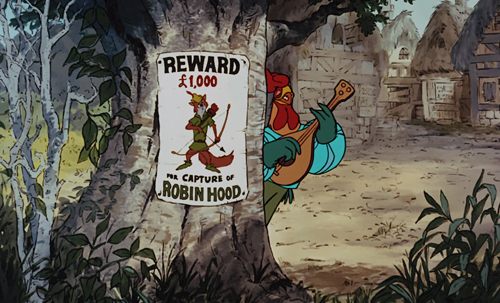 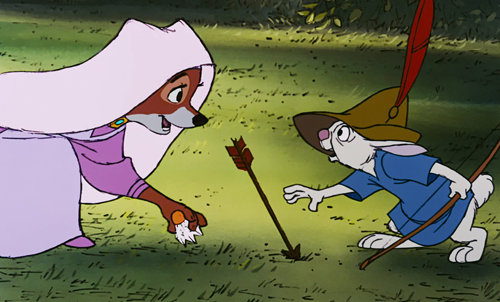 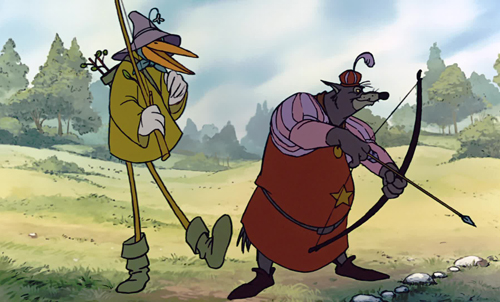 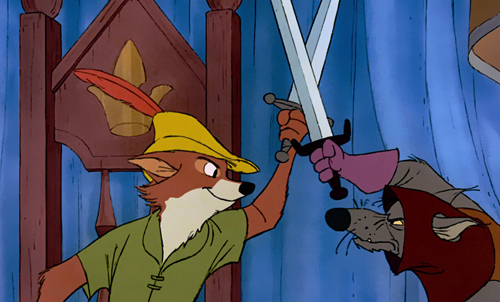 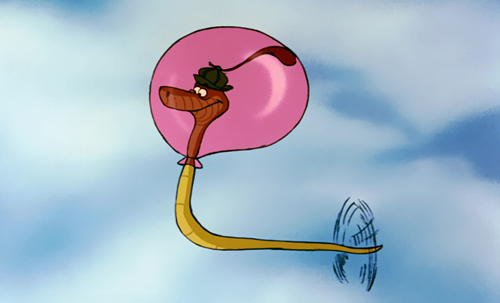 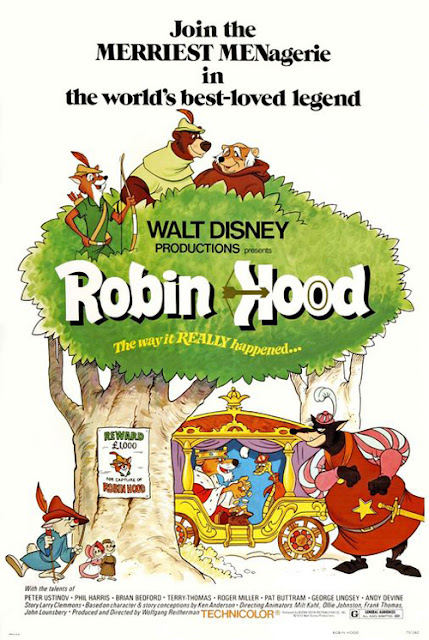 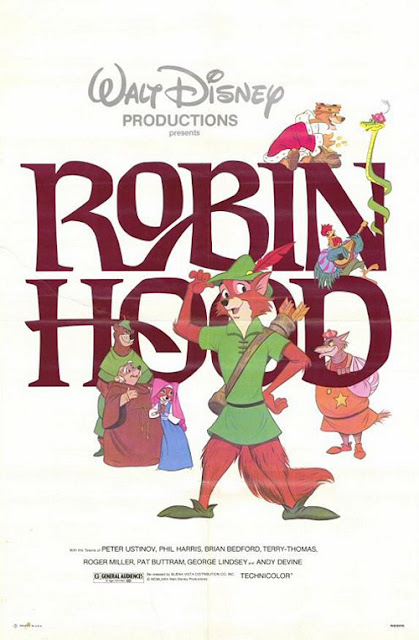