I did call you an exemplar of British fortitude.

My thoughts on Skyfall haven’t changed a whole lot since first viewing. It looks better than any other Bond movie, courtesy of Roger Deakins’ cinematography, and Sam Mendes assembles a strong cast, but rather than an all-out Bond fiftieth celebration this is The Bond and M Show, a consequence of Dame Judi Dench’s over-glorified seventeen-year stint as 007’s boss. It also fundamentally lacks the precise storytelling – both in terms of screenplay and Martin Campbell’s direction – that makes Casino Royale the exemplar of what a modern Bond can do if really tries.

The only thing they tried here is leading the plot by the nose, back engineering it to give M a send-off. The villain Silva (Javier Bardem) has all of two good scenes (one on his Inception island and one in his Silence of the Lambs cell), just enough time to establish that the series, with its new propensity for backstory, has perversely become the tale of an orphan looking for surrogate parents; into which comes Silva the wayward sibling (and from which springs more filial obsessing with Blofeld in Spectre). It doesn’t necessarily take a lot for a villain to make an impact – Donald Pleasance hardly shows up in You Only Live Twice, although that one’s a bit shit anyway – but Silva’s entrance into the annals of Bond villainy is rather undercut by his obsessing over “Mommy”. Instead of making the threat personal, (again see Spectre for wearing such things into the ground) it makes it studiously unremarkable.

Silva’s elaborate plan is also pretty daft. Although that’s nothing new for a Bond movie, the Craig era had sought to pride itself hitherto on sticking a bit more closely to the feasible, or at least vaguely real world. Silva would have got his claws into M much more effectively if he hadn’t had himself caught, instead just turning up on her doorstep (and all that business with the effects spectacular subway train crash?)

But Bardem’s mannered performance is effective in a way Waltz’s in Spectre isn’t. He carries natural menace on his shoulders (see No Country for Old Men) and, while I don’t think all that much of his rat story, the account of the effects of hydrogen cyanide – complete with visual evidence – is a better twist on the disfigured villain than any amount of stolid exposition regarding the flawed establishment; the system makes the villains, and you can see how right there.  It also explains why Brosnan’s Bond threw his capsule away years ago.

Of course, Silva’s unparalleled skills as a cyber terrorist lead one to wonder why he took so long to launch his plan (months by the look of it, since Bond got to play dead for a decent spell). And his character – the opposite of Bond – has already been covered with class (Christopher Lee) and unmemorably (Sean Bean), and even as a side order of heavy (Robert Carlyle). Added to which, there are familiar elements of hoodwinking the good guys and blowing up MI6 HQ (The World is Not Enough, curiously plundered throughout the Craig era). The result? A character and plot that are really about the window dressing rather than offering anything truly striking within.

Silva’s not-quite advances on Bond (“What makes you think this is my first time?”) also feel contrived, laid on purely for the column inches the old misogynist dinosaur resorting to a bit of bisexuality will drum up. And he’s not really, is he, while Bardem’s almost mincing performance could equally be accused of falling into the camp (ahem) of stereotypical villainous homosexual degenerates of yesteryear; not really progress at all, then.

Talking of which, it’s slightly alarming, even by the series’ standards, that Mendes lets Bond have his way with Severine (Bérénice Marlohe) in the form of a (particularly arty, particularly steamy) traditional Bond shag, just after he has gone to all the trouble of analysing her abused upbringing and sale into sex slavery. Way to go, James, you scored there! (And then Severine is killed because Bond can’t shoot straight – with a gun that is –and he’s making quips a minute later.)

The déjà vu invading Bond’s plotline of being over the hill and betrayed also derives from the Brosnan era (his injury in The World is Not Enough, his captivity in Die Another Day; the title sequence even segues into Bond falling just as The World is Not Enough one does). One might argue Eon is trying to regain the Bond-as-underdog footing of Casino Royale, but it comes across more as the desire of the lead actor to prise nourishment from a non-part.

It’s also too soon, only three movies in, for Bond turn to the booze and get the shakes when he raises his weapon; we’ve only really seen him on one mission so far. More, these scenes, revolving around conflict with M, have been so played out by this point that there’s nowhere new to go. I keep going back to The World is Not Enough, where we’ve had M’s culpability thoroughly raked over more than a decade earlier, while Die Another Day also added unnecessarily to that pot. The only route left open is mawkishness over losing a stern but devoted surrogate mother.

There’s also the chance of exploring Bond’s childhood, this being Bond 50. The thing everyone had been demanding that the series do for the movies’ shallowest of spies. The drive to the Highland home is visually splendid, and much of the lighting during the showdown is impressive, but the sequence fails to catch fire dramatically. Silva is reduced to status of hampered heavy, his plans undone. Bond is forced into quipster mode as he destroys his heritage (“I’ve always hated this place”).

I think I was probably a bit too harsh on Craig’s handling of the humour previously. While he is at his best adjusting his cuffs rather than attempting quips, if the lines suit him he carries them off with aplomb. The Q stuff (Ben Wishaw is great) is good fun, but the likes of “Well, I got into some deep water” and his banter with M falls flat. So too does his weeping over her corpse, and the attempt to invest compassion in the guy who threw Matthias in a dumpster as (in the opening sequence) as he is ordered to pursue a villain rather than hang back and save a fellow operative’s life.

It’s probably clear I’m unsympathetic towards honouring M they way Skyfall does, since Dench’s national treasure status has gradually encroached on the series to its detriment. The (otherwise very good) pre-credits sequence has her constantly interrupting the flow by asking what’s going on like an idiot (STFU and let them get on with it). There are attempts to lighten the character (“Oh go on, eject me. See if I care”, her softening with Albert Finney’s gamekeeper) that flounder miserably, and the last half hour seems to be an exercise in waiting for her to finally cark it. Which she does, leaving Bond her bulldog paperweight. Oh, and a videotape. But not yet, that’s the next movie. And then, in Bond 25 she’ll also have left him…

The irony of complaining about the overuse of M is that her replacement Mallory is used incredibly well, set up as a thorn in the side of M and Bond before it’s revealed he’s on the side of the angels (and is good at killing people too!) There is a rather unfortunate “assembling the gang” feel to Skyfall, though, particularly with the trio of Tanner, Q and Mallory getting behind Bond’s plan at the end. This isn’t Scooby Doo, and Bond should essentially be out on his own, unencumbered by family and friends.

There’s also Moneypenny, as far as we can tell a platonic Bond girl relationship (curiously, the second in a row after Camille). While Naomi Harris is always very good, and her character at least makes sure Bond finally has a shave, the bloody scruff bag, her characterisation is strangely regressive (well, you might argue not at all for this franchise), since she acquiesces to Bond’s advice that fieldwork is not for everyone and so takes up the role of flirtatious desk totty. It’s also fairly unlikely that Bond would be working in the field with her and never catch her name until he does so for the reveal gag (also, since everyone guessed anyway, like they did with Waltz, it’s a completely pointless exercise).

The best thing the movie does, in terms of its wallow in nostalgia, is blow up the Aston Martin. Hopefully Bond doesn’t get a replacement. Otherwise, Skyfall is a strange mixture of innovation and navel gazing. Mendes isn’t the methodical craftsman Campbell is, but several of the action spots are rather fine, and there’s even the odd occasion (the silhouetted fight in Hong Kong, M quoting Tennyson) where he comes close to visual poetry. There’s also a CGI Komodo dragon. Or two.

I’m less impressed by Thomas Newman’s score on revisit; the moments where he introduces electronica are arresting, but he seems to wilfully resist a Barry-esque symphonic approach or bringing in the Bond theme, as if he’s begrudging the legacy (something David Arnold embraced). And, much as I like Adele’s “Crumb-o” song, the opening titles are merely so-so; time to get the lead character out of the credits, as they end up encumbered by him (it also can’t be a coincidence that the best title sequences of the last two decades are both from Martin Campbell entries).

Also not terribly successful (and on, into Spectre) are Mendes’ attempts at political commentary. He’s basically giving a dry run to his arguments about drones in the next entry, supporting Bond as the guy who has to know when to pull the trigger or not. However, I can’t help thinking they’ve bottled it, since Casino Royale managed to present a guy who wasn’t such a nice guy at all as the lead character and still bring the audience along for the ride. Commentary remains possible within that context (if you feel Bond is a suitable forum for such things, and Mendes, as a staunchly liberal filmmaker who also wants to cash an enormous pay cheque, clearly does).

Which means there’s a sense here, much more so than in Casino Royale, where the tweaks to formula were surprisingly seamless for the most part, that mixing things up and attempting a veneer of depth (undermined by the casually offensive sexual politics) serve only to expose how rudimentary Eon’s and Mendes’ approach is; Moneypenny, she’s black now; Q, he’s a maybe-gay tech nerd; M… No, we’ve got nothing. Guess we’ll make him a bloke again. But nice this time.

So Skyfall is much akin to Spectre for me, even given the latter has received an unending rain of brickbats while the former basks in the glow of fervent adoration (which one edges which, I probably won’t decide for definite until the dust settles); they’re both entertaining Bond pictures, each furnished with a raft of spectacular action sequences, but they aren’t top flight 007s. If Spectre is Craig’s final outing, he at least has only one outright turkey in his collection. Get past all the hype, and huge box office, and the thing the 23rd Bond really has going for it is that it’s sporting an immaculate suit. Not quite the emperor’s new clothes, granted, but Skyfall can’t quite fill out its glad rags. 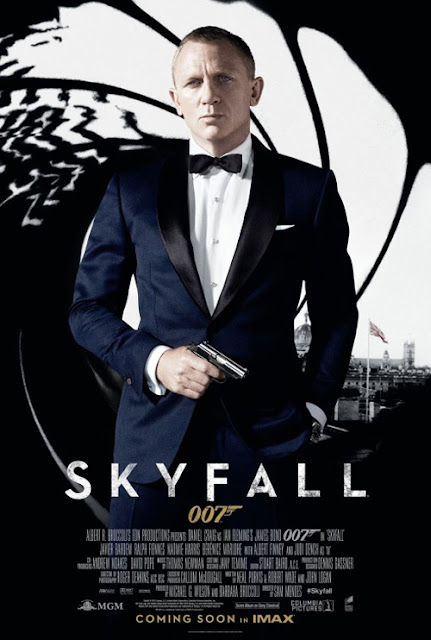 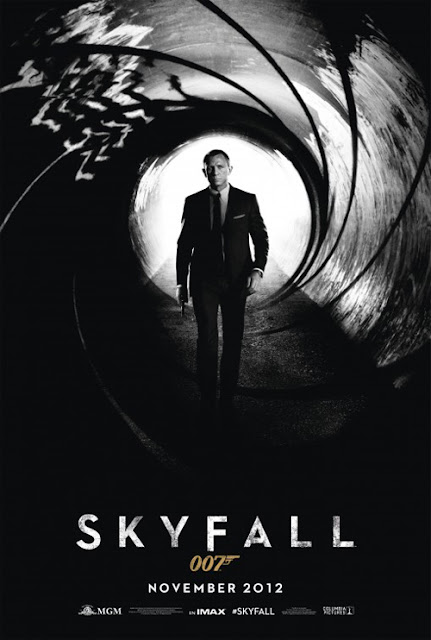