You shouldn’t have asked about Dubai.

If James McTeigue’s sub-Salt agent-on-the-run thriller had a self-awareness and sense of humour about its unbridled idiocy, it might feasibly have become really good fun. Instead, it’s left to Pierce Brosnan’s assassin, “the best operative in the business” to bring the entertainment value. He thunders through the proceedings as if a permanent bad smell is lingering just under his nose, while Milla Jovovich’s titular Survivor is left wearing a permanent startled expression, the only one her rictus face seems able to convey.

Presumably no one thought much of Survivor’s box office prospects as it went to video on demand in the US, accompanied by a few grudging (probably contractual) cinema screenings. McTeigue only seems capable of delivering when he has the Wachowski siblings to mentor him, which may explain why he ended up plumping for this cheapie shot entirely in London and Bulgaria (despite a Times Square finale on New Year’s Eve). His action occasionally passes muster when it features Brosnan’s Nash (aka The Watchmaker) pursuing his quarry, but it’s more often choppy and uninspired. Indeed, once Jovovich’s Kate Abbott manages to elude Nash and gets herself on a plane heading for the big climax, any semblance of suspense has departed with her.

If Philip Shelby’s screenplay wasn’t so roundly implausible and full of holes, one might take its nominal role as a propaganda piece seriously. It finishes with an onscreen caption announcing “ Since 9/11 American law enforcement has stopped 53 terrorist attacks in New York City alone”, although one wonders how many of these alleged potentialities were actually enabled by ever-loving undercover FBI operatives. Earlier, the picture’s thrall to combating the all-consuming threat of terrorism is announced by Kate having a flashback to the Twin Towers and the announcement that “She lost some of her best friends on 9/11”. I suppose it’s an achievement that in fourteen years we’ve reached a point where it’s fair play to use the event as cheap emotional shorthand, rather than expunging it from screens lest it be deemed to upsetting (Zoolander).

9/11 also comes into play with the plan of the bad guys. It turns out these aren’t passionate zealots, intent on striking at the heart of America (well, apart from Roger Rees, in his final role, as the bomb maker fuelled by the desire for revenge against a corrupt state that… refused his dying wife’s Visa application. Of all the things he might have got upset about. The bastards.) For a movie so sucking up to the security services, it curiously decides to echo one of the conspiratorial loose ends of 9/11 previously referenced in Casino Royale; the Watchmaker notes that, when the New York exchanges opened after 9/11 “people who bet against the market made a fortune”.

For Pavlou (Benno Furmann) this isn’t an act of terror or a bold political move, “it’s just about making money”; post the bombing he plans to make $100bn from similar short selling activity. Perhaps the picture is subversively suggesting that all such terrorism has a money motive somewhere at its core but, given its apology for a plot, I suspect it just plain isn’t aware of how incoherent its content is.

Kate, employed by the US Embassy in London, has been rooting out dodgy Visa applications, much to the ire of Ambassador Crane (Angela Bassett, bringing forth her best hard-nosed bitch), who doesn’t wish to cause any ruffled feathers with anyone. Colleague Bill Talbot (Robert Forster), working for the enemy under duress, reports this to his overlords who duly despatch Brosnan, “one of the most wanted assassins in the world” (talk about bigging someone up) to take her out.

This is one of those pictures where everyone needs to be bloody-minded above and beyond the call of duty, from Crane to James D’Arcy’s police inspector (“The longer she lives, the more people die!”), where the protagonist can’t seem to twig why her would-be assassin is always on her tail despite her carrying around an ID card with a tracking chip in it, and who seems to think that donning a pair of spectacles will get her most wanted mug through airport security (hey, it works!)

Lest you think all is lost, though, there’s Pierce, roaming around London stabbing people in the neck (“You shouldn’t have asked about Dubai” he tells an overly chatty computer hacker) and destroying blocks of flats with a single bullet. He’s an unstoppable killing machine, until he isn’t. One of the great unintentionally funny lines in the picture finds Kate’s devoted colleague Sam (Dylan McDermott, who is to be commended for appearing in nothing but B movies) describing this uber-assassin; “He’s had so much reconstructive surgery, no one knows what the hell he looks like”.

For one with such a towering reputation, the Watchmaker doesn’t especially show it; Brosnan donning a fake moustache is about the extent of his skills as a master of disguise. He also seems to send easily traceable courier services from his home address (quite what is going on with that elaborate bomb in a restaurant ruse is beyond me), and proves completely inept at accomplishing his task.

Either that or no one counted on Kate being so handy, as she hacks, slashes and generally scarpers from each successive encounter and explosion. It’s a shame she doesn’t cook as well, as she might have given Steven Seagal in his prime a run for his money. The Watchmaker’s inadequacies are never more evident than in the finale, where his plan to detonate the bomb is interrupted by resourceful Kate. She even quips “Time’s up” as he plummets to his death on the stroke of midnight. Alas, Milla’s never been one for comedy.

Kate, who earlier expressed doubts about her chosen career, is now convinced of the value of her role, the one where she fights terrorists all over the globe and generally snoops on everyone she possibly can, as we all should be; she saved over a million lives on New Year’s Eve, “So I guess this is what we’re doing with our lives”. Perhaps the most bizarre consequence of this budget-conscious affair is the casting of Frances de la Tour as Kate’s confidante within the US Embassy HQ. I think Miss Jones is supposed to be American, but I’m still not entirely sure. 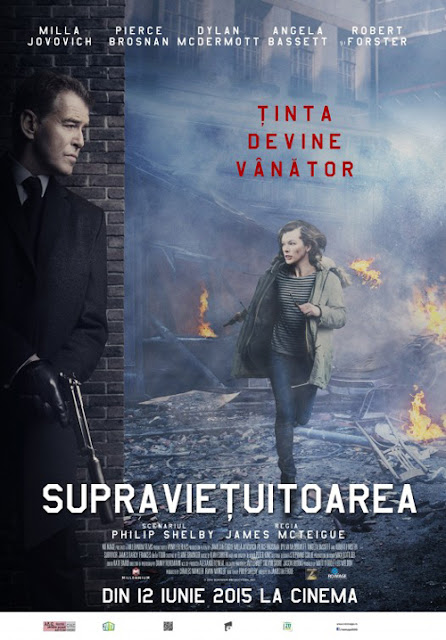