We just cut up our girlfriend with a chainsaw. Does that sound “fine”?

Evil Dead II (also known with the subtitle Dead by Dawn) is one of the funniest films ever made, as a result of which it remains a high-water mark Sam Raimi and Bruce Campbell have yet to surpass. Understandably so, it will be no blemish against them if they are unable to again equal the sheer energy, inventiveness, exuberance, glee and craziness very throw into its every frame. It’s the movie that made both their careers, and the very definition of cult fare; one that was an extremely modest success on first release, but whose reputation has grown steadily. How large that currently is will likely be gauged by the current Ash vs The Evil Dead series but, provided the central ingredients comprising Ash are intact and the camerawork is sufficiently unhinged, the ingredients that arrived fully-formed in glorious cockeyed form here, it too could become at very least its own cult item.

If The Evil Dead is a horror movie that succeeds in being gruey but fails to deliver scares (today, at least), its sequel never set out to cause chills. There’s no doubt the picture has a number of knockout shock moments, but invariably they’re in the service of delivering a gag. As Raimi’s previous flop Crimewave indicated (co-written with the Coen Brothers), humorous subject matter is probably his natural arena, or at least where reality is exaggerated to a mischievous degree (while some of his late-90s features show commendable restraint in the service of gaining big studio respect, their lack of fun is marked), but the real propulsive force behind the comedy in Evil Dead II appears to be co-writer Scott Spiegel.

As such, while there’s gore in the picture, it doesn’t feel like it’s gory; geysers of blood spray, arms are decapitated in slow motion, and gruesomeness occurs in silhouette (complete with blood splashing across a light bulb). The red stuff is even blue or green, underlining the sense of cartoonish macabre. The big climax is interrupted by an exchange between The Three Stooges (as a tree being), telling you all you need to know about where the makers are coming from if you hadn’t realised 70 minutes earlier. Returning composer Joseph LoDuca’s score perfectly treads a line between horror and parody in a picture that is almost shot-by-shot, idea-by-idea, gag-by-gag, brilliantly inventive; it’s full to bursting, basically.

Ash: Fine. We’re fine.
Mirror Ash: I don’t think so. We just cut up our girlfriend with a chainsaw. Does that sound “fine”?

If you’re looking for a chicken and egg in terms of who informs who, Campbell or Raimi, it’s worth considering the interesting but messy earlier Crimewave, where the director didn’t get his buddy as lead, and seeing how it suffers as a result (that was only one of its problems of course). Campbell is Ash here, his character becoming iconic in the same way Mel Gibson’s Max became did in The Road Warrior (in acknowledgment, Ash’s sideburns turn white during the climax). Ash’s is the coward-as-hero in a way that hadn’t really been seen and embraced in decades; in the sense that the makers love this character and are getting behind him, you have to look back to the likes of Bob Hope to see someone so unashamedly self-serving, while Campbell’s delivery has the deliciously self-conscious bluster of a Shatner.

Of course, one of the things that make Ash a likeable anti-hero is also that he’s capable (in contrast to the previous year’s Jack Burton, who has a very high opinion of himself but is almost entirely useless). Much that he will scream and wail, and run away, he’ll also get pissed off, vindictive and petty, such that he’ll lead the charge to sort the mess out (“Then let’s head down to that cellar and carve ourselves a witch”).

He’s also resolutely down-to-earth, dealing with all this insanity as if he’s been slighted by the kids next-door (“You bastards! You dirty bastards! Give me back my hand! Give me back my hand!”), engaging in one-upmanship with the hand he is severing (“That’s right. Who’s laughing now? Who’s laughing now?”) or generally being petty (“Gotcha, didn’t I, you little sucker?”). Then there’s the string of one-liners that only gain their stature through a combination of circumstance and inimitable delivery (“Work shed!”, “Chainsaw?”, “You’re going down!” and, of course, “GROOVY!”)

Raim’s dedication to putting Campbell through the mill, beating him up and generally aggrieving him is to be commended, for the good of the picture, of course. Come the last scene, Ash is still the reluctant hero, in a neat subversion of mythic lore (“He was prophesised to destroy the evil”; “He didn’t do a very good job”, mutters Ash, little realising he’s talking about himself).

The constant visual invention Raimi musters makes it easy to appreciate the way not all of those he worked with were so understanding of his priorities (notably Gene Hackman on The Quick and The Dead). Raimi brings on the Dutch angles again (Ash falling into a puddle being one of the best), but his camera isn’t just restless now, it’s gone berserk, pulling off repeated coups through judicious editing, such as Bobby Joe’s head heading for a tree and cutting to the smashing of the glass frame containing the Necronomicon, or both Ash and his Oldsmobile landing in the twelth century in the same shot.

This is all in the aid of comedy, mostly, and it makes it extra-worthy as a result. Characters fly around according to the rules of Warner Bros cartoon physics; Ash careers through a windscreen, Jake is lifted ceiling wards and breaks a light bulb with his head. The evil force chases Ash into the cabin, through endless rooms – deceptively labyrinthine – then loses him, looking from side to side before reversing in defeat.

Similar fun with point of view comes as Ash’s possessed hand, having knocked its host unconscious through repeatedly smashing plates on his head, drags him across the floor looking for a meat cleaver. Anything involving the hand is pretty much priceless; it isn’t just Campbell’s mime (when it’s still attached) but the enormously expressive squeaking noises it makes. Then there are classic gags, likeable for how corny they are (“Baby, I ain’t holding your hand”, the hand caught under a bucket with novel A Farewell to Arms placed on top).

The slapstick embraces everything from Ash’s headless girlfriend (the gleeful comedy cackling of the female possessed is back here) attacking him with a chainsaw to Ash bashing her head against books, walls, whatever he can find; which is payback for her repeatedly slamming his head into a boarded-up window. The escalation of mayhem as the possessed break loose is almost equivalent to the test scene from The Thing, but a comedy version as the set piece “scares” are played for yuks (the demon gets a hairball after biting down on Bobby Joe, a flying eyeball ends up in her mouth).

Some of the blackest material has Annie stabbing Jake accidentally and then repeatedly slamming him in a door, and then screaming at him to shut up screaming. If it was anyone but Jake we might feel sympathy, but instead we’re rather relieved when he’s dragged headfirst into the cellar (and a geyser of blood erupts). Some of the gags don’t even require effects; Evil Ash having trouble with a screen door, or Annie repeatedly attacking Ash with an axe eve after he’s told her he’s fine (“Damn it, I said I was all right. Are you listening to me? Do you hear what I’m saying? I’m alright. I’m alright”).

Henrietta: Someone’s in my fruit cellar!

The effects in Evil Dead II are generally pretty impressive. The prosthetic work, courtesy of Greg Nicotero (fresh from Day of the Dead, and now supervising TV zombies) particularly Ed and Evil Ash, still looks agreeably messed up, halfway between generally disturbing and hilariously grotesque (Henrietta has something of Baron Harkonnen about her). As does the animated deer head, and the moving tree (the tree assault sequence fortunately stops short of the first movie’s).

Some of the stop motion is rudimentary, of course (the dancing Linda, although her leaping off with an “Ahhh” makes it worthwhile; the flying deadite at the end) but even that is charming. The use of green screen is generally superb, from Ash and the moon as night falls, to the time whirlpool appearing in the woods and sucking everything in (including, mirthfully, a whole stove), to Ash’s version of the 2001 stargate as he performs somersaults. The sound here, and throughout, is particularly effective. By turns discordant, oppressive, whacky, loopy, creepy.

Raimi and Spiegel power the narrative such that there is no fat, and the picture doesn’t fall into the banal repetition of the original. There’s a constant momentum, and the recap borne of necessity (rights to the first picture being unavailable) becomes a signature for the series, while also adding a further reference to Mad Max (the series is connected, but only by its main character).

We spend loads of time with just Bruce at the outset, but its constantly inventive and hilarious and absurd. Then Annie and the hillbillies arrive. Then there’s Ash turning bad, and silly contrivances to create further the plot that work where they should create a groan (“We’ll throw him down there”, Jake dropping the pages into the cellar), and finally hurling Ash back to the twelfth century.

The Evil Deads are all about Bruce of course, so it might not be too surprising that the supporting cast have made little impact beyond the picture’s confines; Sarah Berry (Annie Knowby) has only the one other movie credit, Kassie Wesley DePaiva (Bobby Joe) has worked consistently, but in TV soaps, while Dan Hicks has continued cameoing in Raimi and Campbell projects but with a performance as hilariously obnoxious and repellent as Jake (“Shhh-awww!”) he ought really to have had a greater legacy (he’s the only one here who can steal a scene from Campbell, and his cries of “Bobby Joe!” are priceless). Denise Bixler, the second of three Lindas, like Berry has worked very briefly in movies, Richard Domeier (Ed) has a had a sparse career, Lou Hancock was in Places of the Heart (as the wags on the commentary track note) and John Peakes, despite a fantastic vocal register, also has few credits. Then there’s Ted Raimi and his gallons of sweat as the monster version of Henrietta.

Evil Dead II isn’t just that rare sequel that is superior to the original; it knocks its predecessor into a hat. If it hadn’t been for Spider-Man, Sam Raimi would still be struggling to escape from its illustrious shadow. Campbell’s smart enough to know all the good it has brought him, comfortably wallowing in his B-actor status and the adulation that comes from having portrayed a cult icon. That both have finally returned to Ash this year, after decades of talking about it and a remake/cash-in that failed to set the world on fire, hopefully won’t turn out to be too much of a good thing. For some, the second sequel was that already. I’d disagree, but it’s probably fair to suggest Dead by Dawn, is The Godfather Part II of horror sequels. 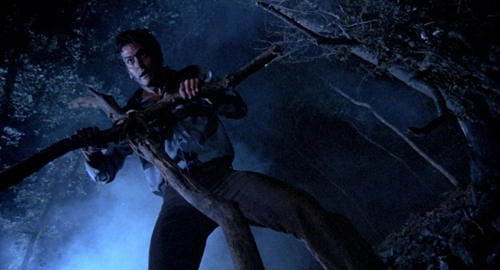 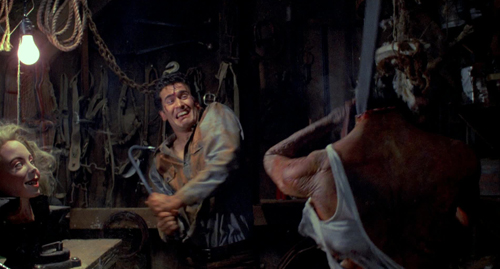 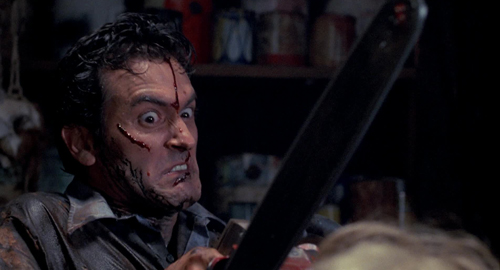 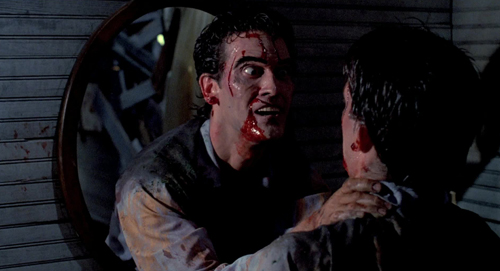 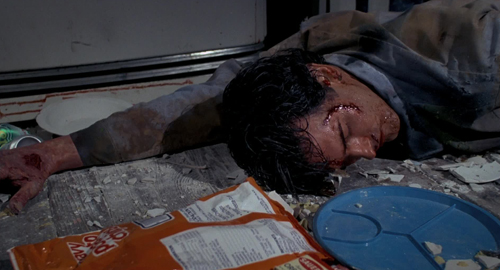 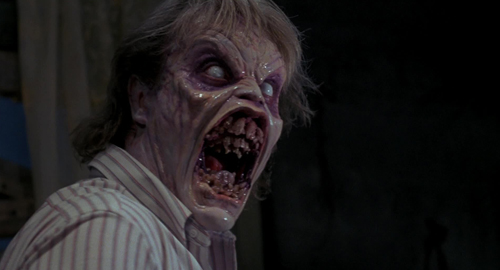 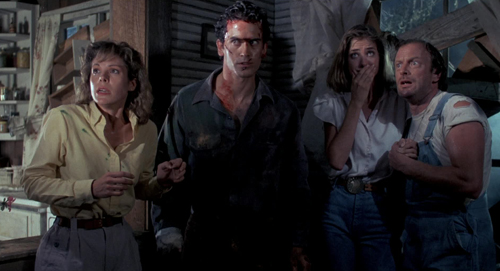 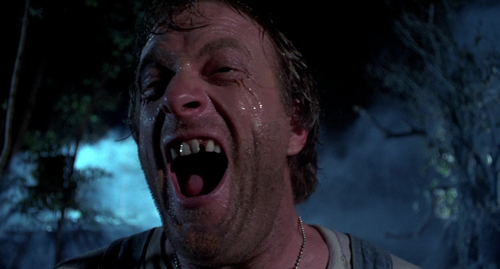 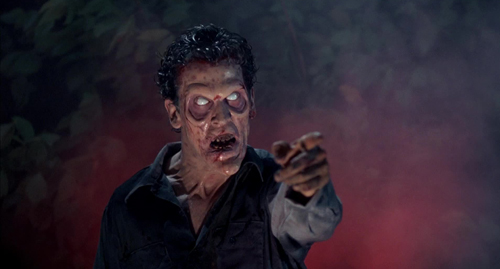 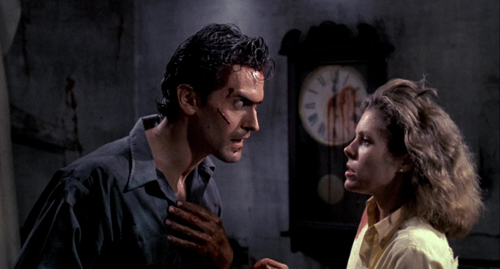 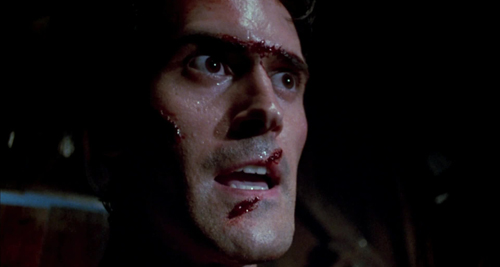 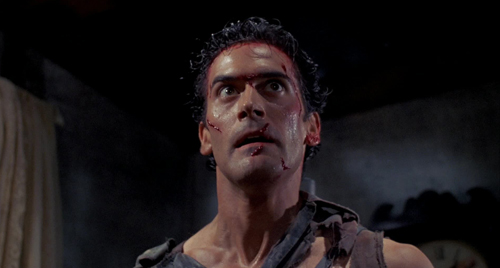 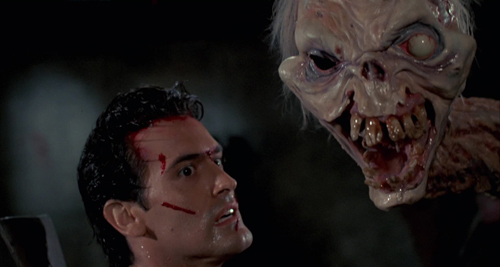 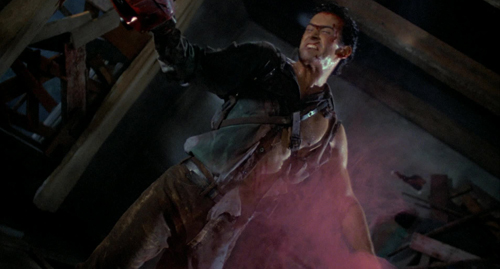 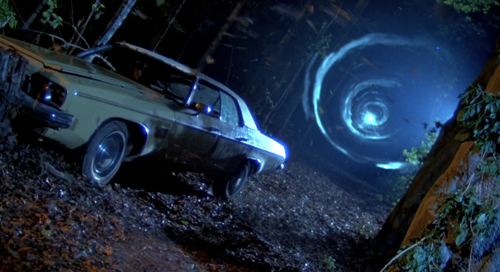 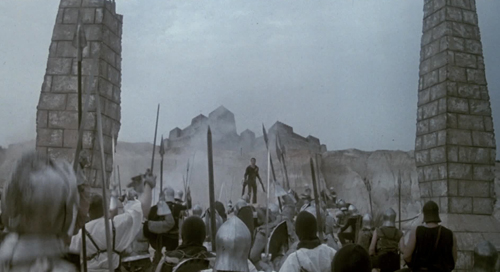