This just about takes the giddy biscuit!

The finale begins with a lovely sequence in which Bertie, struggling to fend for himself, consults Mrs Beeton’s Household Management in respect of making a cup of tea, and so becomes thoroughly confused. Woven into this are neat plays on the identity of Jeeves as Bertie is trying to avoid all calls following the Brinkley Manor fiasco. Batty Barmy, who has arrived for crafty cigarette due to a bet with Oofy on how long he can go without smoking, is convinced Bertie’s impression of his valet through the door is the real thing. Subsequently Bertie enlists Barmy to pretend to be Jeeves when the phone rings (Adam Blackwood does a more than passable Jeeves impression).

Barmy: (on the phone) What do you mean, you think not?
Barmy puts the phone down.
Bertie: Well, who was it?
Barmy: Jeeves.

Jeeves saves the day and makes a pot of tea, of course. He also secures the return of Anatole, appealing to the role of the Gallic races in bringing civilisation to the rest of us. Bertie just can’t keep away from Brinkley Court however, and returns on his own recognisees.

Bertie’s first major encounter on his return is with Tuppy (“I’m Scots!” he responds on being told by Bertie that eavesdropping isn’t very English). It’s during this sequence that Madeline delivers Tuppy a plate of sandwiches (“It’s like leaving food out for a little animal, isn’t it?”), and Tuppy swings a well-aimed foot at it. Tuppy’s later pursuit of “that serpent Fink-Nottle”, who has proposed to Angela in a post-Madeline funk, is grist to the mill of the boiling imbroglio cooked up by Bertie (or “Atilla the Hun”, as Aunt Dahlia decides to refer to him).

Jeeves: It is not always a simple matter to gauge the effects of alcohol on subjects previously unexposed to such stimulants. It can have distressing results in the case of parrots…

The highlight of the episode is Gussie’s blotto presentation of prizes, however. Even Jeeves appears to be persuaded by the fortification that a surreptitious snifter can have on the constitution and mettle. And, indeed, it works in the first place. Gussie summons up the goods to propose to Madeline. Unfortunately, both Jeeves and Bertie separately added a significant quantity of gin to Gussie’s orange juice. This happens in quick succession, leading Jeeves to quote the Scottish play. Gussie may not be a parrot, but he is a poop (or “a sensitive plant”, as Jeeves suggests).

At the prize giving, Garnett does a tremendously winning drunk, one who goes down well with the kids when he takes a poke at the headmaster (“Well of course you should, you silly ass” he retorts when the latter admonishes himself on calling Gussie Fitz-Wattle). Gussie rambles on about how it’s a beautiful world and takes shots at Bertie, whom he despises as a pessimist and, evidently, a cheat whom he considers received the scripture knowledge prize unfairly.

As with any Wodehouse, the true glory of his scene needs to be savoured in unexpurgated form on the page, where Bertie’s account of events washes it with gloriously tickling prose. But that’s not to say the screen version isn’t hilarious in and of itself, as Gussie asks young PK Purvis if he is married and launches into an attack on GG Simmons, winner of the Scripture Knowledge prize (the subject at which Bertie apparently cheated).

Jeeves’ fire alarm incident is yet another “cruel to be kind” plan whereby the instant degradation and mockery Bertie experiences turns to relief and gratitude (“Your methods are a little on the rough side”). Jeeves conceals the key and Bertie is sent on a wild goose chase to fetch one from butler Seppings (the staff are off having their annual dance).

This does provide Bertie with one of his best lines, noting of Jeeves’ successful wheeze, which is based on the idea that each man would save the object closest to them from a potential fire, “It seems to me there’s a grave danger of seeing Tuppy come out carrying a steak and kidney pie…” In absentia, the parties make up through collective blaming of Bertie; ice was broken and, “Of course, rain was a bonus”.

So the first season of Jeeves and Wooster ends on a high. The “amatory entanglements of Brinkley” turn out to be ideal material for adaptation. Fry is a dependable face of valet-dom, and Laurie is, of course, a defining Wooster throughout. He makes a particularly fine show here of a bedraggled and bewildered Bertie, subject to the ridicule of the reconciled parties on his return from Kingham Manor. However, he is battered but unbowed and perks up at the prospect of an omelette and “Perhaps a little half bottle of something”. 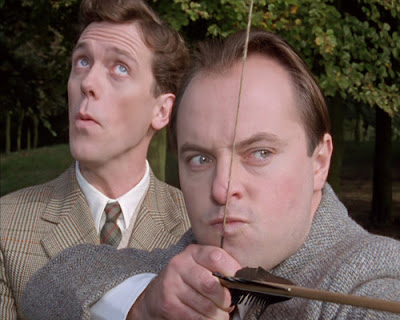 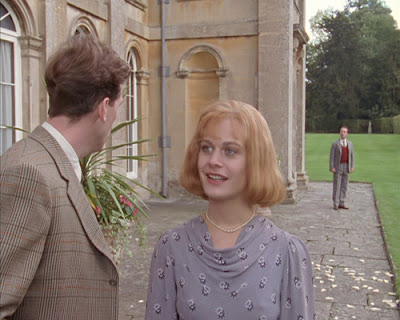 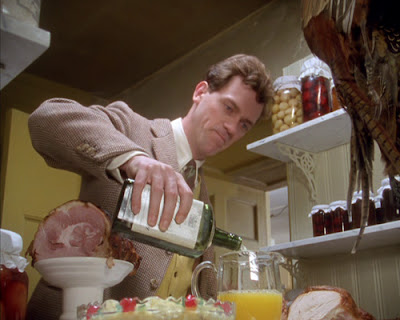 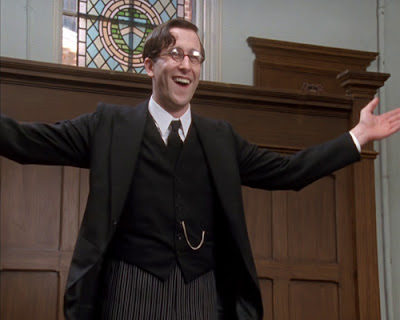 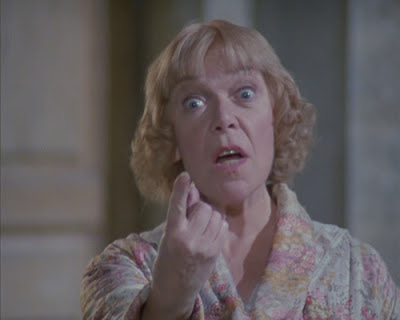 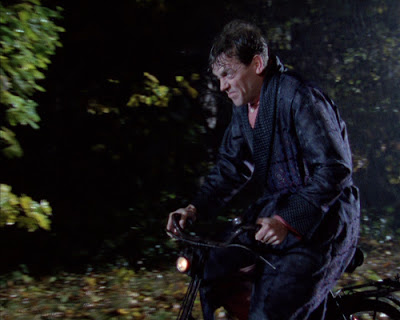 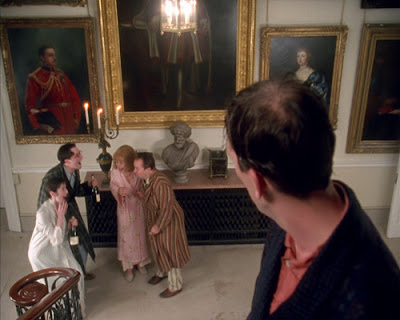 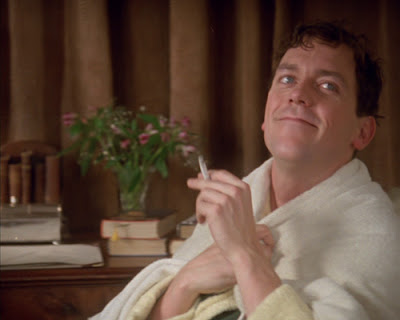