Sky Riders
aka Assault on the Hidden Fortress
(1976)

In Sky Riders, fiendish terrorists have kidnapped the wife and children of wealthy industrialist Jonas Bracken (Robert Culp) and, unsurprisingly, the authorities aren’t much use getting them back. In times such as this, what you need is an estranged husband, a bit of a maverick, the kind of guy who can get things done: step in, New York cop John McClane. Or, failing him, vagabond black marketer Jim McCabe (James Coburn). If nothing else, he’ll come up with a barking mad scheme to get his (sort of) family back. And it might just work.

McCabe’s plan is to rescue Ellen Bracken (Susannah York) and her two kids (one of whom is McCabe’s) from the remote mountain monastery where they’re held by hang-gliding in on a moonlit night. McCabe has never had a lick of hang-gliding experience, but it’s okay as he’s persuaded the circus troupe training him up in double quick time to come along. Quite why they are so content to pick up arms and kill people (and get killed themselves) is just one of the many pertinent questions Sky Riders fails to address.

It’s okay though, as for the most part this very definition of high concept action thriller gets by through not hang (gliding) around for long enough to debate its own silliness. Credit is due to reliable B-director Douglas Hickox (his best-known picture is Theatre of Blood, but he also delivered John Wayne-in-London cop thriller Brannigan and the Zulu prequel no one asked for, Zulu Dawn) for keeping the Greek locations scenic and the pace from flagging. Still, it’s that kind of pre-blockbuster era action picture that devolves into a climax with lots of random people shooting at each other (including, for some reason, the Greek police allowing Culp to pick up a machine gun and have a go; perhaps he slipped them a drachma or two?)

Weren’t ’70s terrorists the worst, though? They could show up anytime, anyplace, anywhere, without any warning and armed with the most rudimentary of schemes and shaky of convictions. In this case the World Activist Revolutionary Army have a mission “to liberate the oppressed peoples of the world”, “fighting the tyranny of worldwide imperialism”. Which is all well and good. I suppose you have to start somewhere.

But they haven’t really though this out, certainly not their nameless leader (Werner Pochath, who looks about twelve; a bit like casting Matt Smith as a terrorist mastermind, Sky Pirates could have really used a big cheese with some oomph). As it is, Pochath is thoroughly undermined as soon as he divulges his ethos to Ellen (they must use force against force, commit murder for murder and allow no compromise) who gives him a slow clap.

Still, fair dues to them, they’re just doing their best. Which is why, after demanding $5 million from Culp, they proceed to add a whole arsenal of weapons to their list.  They have some semblance of order though, what with their pretty cool hideout (also used in For Your Eyes Only) and matching t-shirts.

If the terrorists are unimposing lot (Jason Voorhees hockey masks aside), so are the circus freaks. And, if you’re casting Robert Culp, you could at least make use of his sense of humour. Having both Coburn and Culp in a movie is a bit of a coup, but no one capitalises on it (initially there’s suspicion Culp might have been involved, but once the set-up is established there aren’t any surprises in store). No less than six writers worked on the picture, which you’d never believe to look at it.

Besides Culp, there’s crooner Charles Aznavour as the obstructive Greek Inspector Nikolidis and cameos from Harry Andrews and Kenneth Griffith as chums of McCabe. The latter is particularly good value, ribbing McCabe over how Ellen looks ten years younger now she’s left him (“What a difference a good marriage can make, aye McCabe?”) He also evidences why kidnappers should always photograph their captives against a black backdrop.

The suggestion, left at that, is that Ellen was the unwitting goods in a transaction between Jonas and Jim; the former gets the girl in exchange for a five-year sentence commuted to two for the latter. It’s not dwelt upon though, and while it’s clear that Ellen sees Jim as a real man, he’s still, come the last scene –as a real man would be – left on his own, shot up, and assuring her there’s no hurry for his kid know his true identity. So instead, Coburn makes chums with Aznavour as he’s stretchered out. Very Casablanca.

York wasn’t getting a huge number of memorable roles by this point in the ’70s, albeit The Shout and Superman’s mum were just around the corner. She’s a very yummy mummy in this, and is very much in the Bonnie Bedelia mode of not putting up with any shit (but still need a man to save her). It’s easy to see why Coburn would go chasing after her and can’t even be mad he doesn’t get her back (“You always did put me through hell, baby”).

Mostly though, this is Coburn’s show. He’s a guy with a million-dollar grin (after the introductory scene, he doesn’t flash it until past the half hour mark, though; things are that serious!) and struts white flared suits like nobody’s business. Indeed, at one point he’s wearing a shirt with collars the size of pterodactyl wings, and it looks like the most natural ensemble in the world. McCabe’s so damn rugged, he quips “I’ll walk back” after the last hang glider escapes the monastery without him. He doesn’t of course; he leaps on the landing skid of a helicopter and then gets shot full of lead. What a guy!

You can see Sky Riders in all its glory on YouTube (in widescreen too), often the sign of something even the studios can’t be bothered to defend, but it’s actually not a bad movie. Undemanding, daft, but with a solid cast and a director who knows what he’s doing. The big sell of the hang-gliding stunts is probably the least of its attractions, but it’s a reminder of an all-round happier time, when terrorists could be snuffed out just like that and the world had James Coburn on speed dial to get it out of a tight spot. 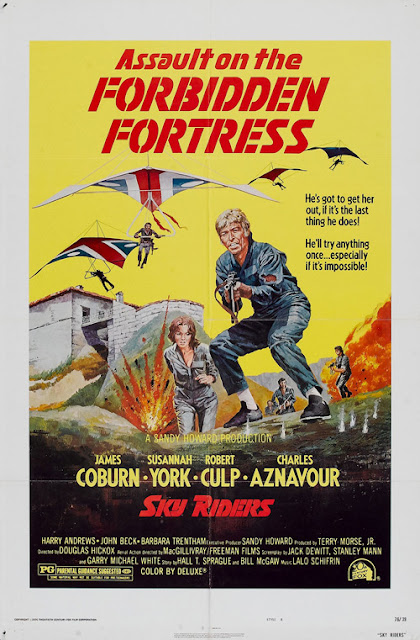 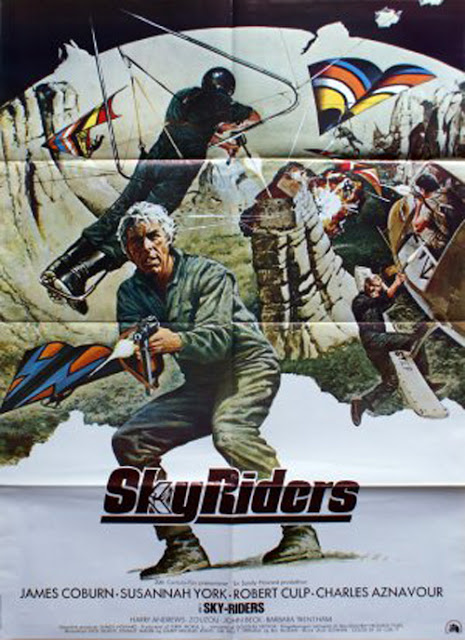