This is war mate, war. Little men like you don’t stand a chance.

With his frantic cry of “Mr Grimsdale!”, perpetual idiot-man-child act and insatiable appetite for slapstick, Norman Wisdom’s oeuvre is something of an acquired taste. He elicits similarly divisive response to his US counterpart Jerry Lewis, in fact. If Wisdom never achieved the full auteur multi-hyphenate status that made Lewis so beloved by the French (he had to settle for Albania), he nevertheless actively co-wrote his pictures and maintained a tried-and-tested line up of collaborators (Edward Chapman, Robert Asher). The Early Bird comes at the tail end of his big screen zenith and, in terms of career high points, is probably equivalent to Lewis’ The Nutty Professor; both pictures are likely more accessible to viewers generally not so taken with their respective stars.

Certainly, The Early Bird was a childhood favourite. I was never so keen on the more mawkish, sentimental side of the Wisdom persona and, aside from his first Norman Pitkin outing The Square Peg (in which Wisdom plays dual roles, and features the classic scene where he confuses a platoon on parade by barking random orders from the cover of his pothole), I could take or leave, or just leave, most of them. After this, he would appear in only a few more movie roles before drifting into TV and cabaret. I hadn’t realised Wisdom was 50 when he made The Early Bird, a flattering side effect of his infantile act, I guess.

It’s perhaps an exaggeration to suggest Wisdom with regular co-writers Jack Davies, Eddie Leslia and Henry Blythe, was getting with the times, but The Early Bird is the first of his pictures made in colour, and the first to feature drugs (even as absurdly as it does) in one of the funniest sequences. Surrealism also abounds, including a lawnmower run amok that speeds along the bottom of a pond and Pitkin seeing the head of Mrs Hoskins (Paddie O’Neal) replaced with that of his beloved horse Nellie. Subsequently, Pitkin takes Nellie to bed, and she puts a leg round her kindly owner.

There’s a plethora of innuendo here too, from bumbling Mr Grimsdale carrying on with the fulsome (Hattie Jacques-like) housekeeper (don’t worry, they tie the knot), to the negligeed woman (Marjie Lawrence) who answers the door to Norman when he’s delivering the milk (a very funny domestic dispute in which David Lodge uses Grimsdale’s Dairy’s milk to hurl at his missus; when Norman keeps ringing the doorbell, the man threatens him “You’ll get a clip round the earhole! This is a peaceful neighbourhood!”), to Mr Hunter (Jerry Desmonde) requesting his secretary (Imogen Hassall) accompany him to the vault, which he promptly shuts after them. It never strays completely into Carry On smut, but it’s more risqué than Wisdom had hitherto been (back when he covered his fingers with his nipples during a medical and embarked on tiresome romances).

There’s even an element of social commentary here, not that it has the cojones to venture into full-on Ealing territory. Norman works for Grimsdale’s Dairy, which is being pushed out if its little patch (as Norman says at the climax, “We didn’t care about making a great fortune. We only had ten streets”) by heartless corporate behemoth Consolidated Dairies. Consolidated will stoop as low as they need to force Grimsdale’s out of the game, from breaking milk bottles to poisoning Nellie.

The implication is very much that small is better, a nostalgia for the old ways when there was community and progress hadn’t crushed lives in its wake. Hunter pronounces “There’s no room in this world for small, niggling firms”, at which Austin (Brian Pringle) the antagonistic Consolidated milkman stealing Norman’s patch, adds “And old-fashioned too”. Later, Hunter insists, “You can’t impede the wheels of progress”.

That Consolidated isn’t brought to book feels like a fairly accurate prediction of the subsequent fifty years of big business run rampant. They’re merely embarrassed by Pitkin’s emotive heartstring pulling; chairman Sir Roger Wedgewood (Richard Vernon) promises Grimsdale’s can have its round back. Perhaps there’s intentional commentary there, but it seems fairly typical of Wisdom’s oeuvre that the little victory, number one, should be worried about rather than the broader implications.

Of course, no one’s watching a Norman Wisdom film for piercing insights into the state of the nation. It’s the delivery of the comedy that counts, and The Early Bird features a series of his finest moments. The opening ten-minute, wordless sequence, as Pitkin and Mr Grimsdale (and Mrs Hoskins) arise in haphazard and less-than-successful manner, is a tour de force. Much of this is Wisdom through and through – getting snagged on doors, falling down stairs, making three cups of tea in one continuous pouring motion – but what makes it sing, besides the auteurish conceit of its length, is a new element to his films: composer Ron Goodwin.

It’s no overstatement to say Goodwin’s score makes The Early Bird (it’s a great shame it’s not available to buy); it’s as singular and memorable as his work on the Margaret Rutherford Miss Marples. The opening sequence in particular perfectly accentuates the rising and falling with action, lending the proceedings an infectious rhythm (even down to Pitkin and Mr Grimsdale yawning in unison at each other).

Elsewhere, there’s a western parody song as Pitkin and Austion confront each other on an empty street (probably an inspiration for The Goodies’ Bunfight at the O.K. Tearooms) and, best of all, Pitkin’s impersonation of a vicar during Hunter’s round of golf.  He attempts to instruct Hunter, “You’ve got to be taught what is right, and what is wrong” to the accompaniment of a particularly groovy section of Goodwin organ.

I’ve seen the golf scene come in for criticism as superfluous, but it’s a note perfect piece of comedy, particularly aided by the wearied tones of John Le Mesurier as Hunter’s golf partner. The key is in the responses of this pair to Norman’s irrepressible brand of anarchy. And, the notion of a vicar behaving like an irresponsible child is irresistible.

The golf course sequence is beaten for laughs only by the aforementioned apple-eating scene, which is just bat shit crazy. It must have left a permanent impression on untold tens of thousands of young minds in the endless round of Saturday afternoon matinee showings The Early Bird has seen on British TV over the past half century.

Norman and Mr Grimsdale both eat one of Nellie’s drugged apples, “coming up” while watching a belly dancer gyrating on television; there’s an unmistakable psychedelic spin here, amid the more obvious gags (Grimsdale puts his glasses on upside down, and inevitably sees the TV image upside down). This reaches a warped crescendo when Norman, entering Catherine Deneuve in Repulsion territory, retreats to a corner of the room assaulted by visions of his horse, the threats of Mr Hunter, and the Mrs Hoskins accursed clacking knitting needles.

Subsequently, Frank Thornton cameos as a drunken doctor (more lechery here, as he’s about to have his way with a couple of lovelies at a party) who instructs Norman, of Nellie, to “put her to bed with a hot water bottle… and give her a sleeping pill”.

I have to admit, however, that by the time the grand climax arrives, with Pitkin causing mayhem in the Consolidated Dairies building (the exterior realised with a nifty matte painting) dressed as a fire chief, I grow a little fatigued by it all (likewise, Pitkin attempting to fill milk bottles from a dirty great urn just tests the patience). There’s a nice running gag with Peter Jeffrey’s fire chief continually falling down a lift shaft, but the free-for-all abandon is less satisfying than the clearly structured lunacy that precedes it.

Wisdom’s also better in scenes with foils than indulging himself on his own. So his coughing fit on the golf course is so effective for the reactions of Le Mesurier and Desmonde, while his mistaken marriage proposal, in which Mrs Hoskins’ bawling induces a likewise response in Pitkin, is hilarious.

Pringle’s wily rival milkman is perfect at pointing out Pitkin’s immeasurable denseness, and lends his already sharp dialogue the blessing of superb delivery (his account of cats “Frustrated beyond measure, they go stark staring mad, and smash the bottles” or confession “What makes a man want to break bottles? Headaches. Blinding headaches”; even with Desmonde, Pringles’s reading of “You mean, something in its food to confuse it mentally?” when discussing nobbling Nellie is scene stealing mastery).

Desmonde, here in his last big screen appearance, was a thorn in Pitkin’s side (or rather, vice versa) in several of Wisdom’s earlier pictures, and he’s the perfect face of irate entitlement, undermined by someone mentally and socially his inferior.

The Early Bird was the end of an era for Wisdom; it was his last Pitkin, and his last appearance with Chapman. It came at a point where he had come out of a dispute with Rank regarding greater control over his projects. Arguably, wanting to change his formula was essential given he was no longer a spring chicken, but he’d collaborate with the studio in only one further starring role (and by the end of the decade he’d be putting the final nail in his big screen coffin when he ignominiously threw himself into free love picture What’s Good for the Goose). As such The Early Bird might be the most successful distillation of what Wisdom could do when he was given a (relatively) freehand, tweaking the formula rather than ditching it completely. 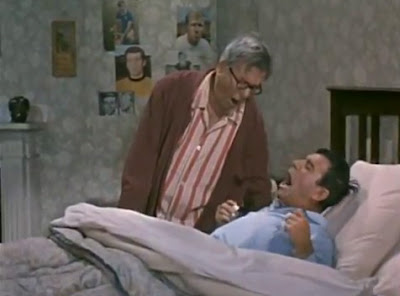 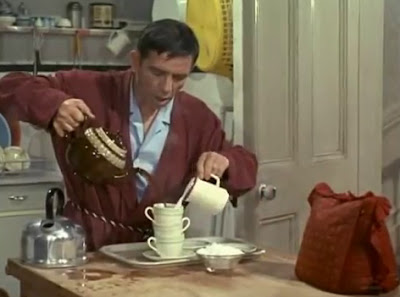 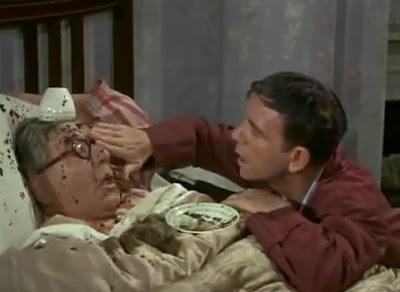 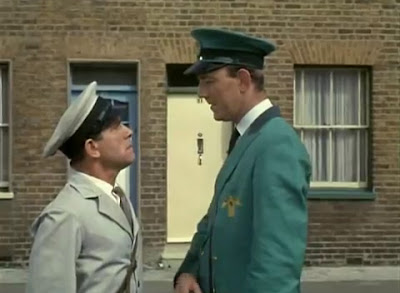 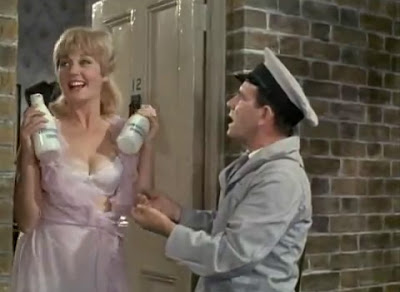 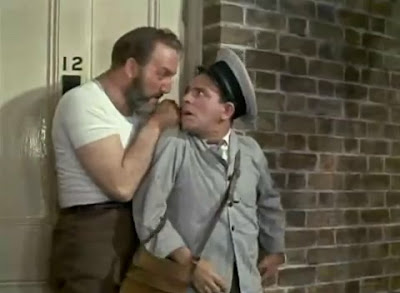 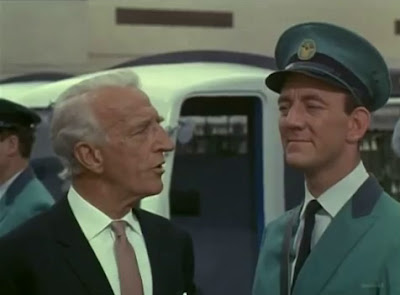 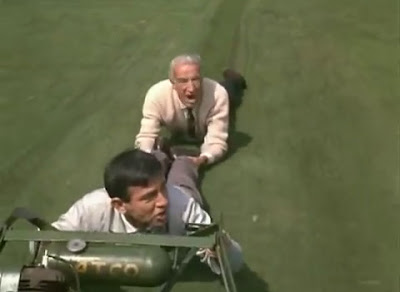 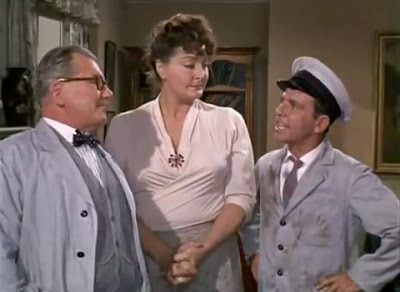 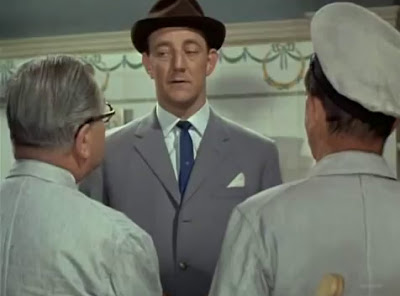 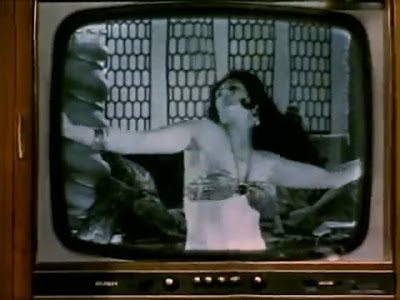 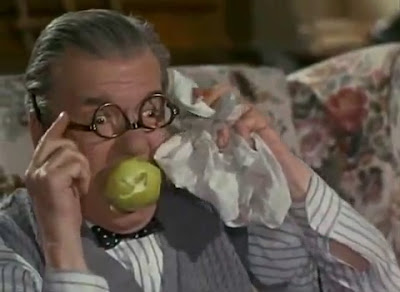 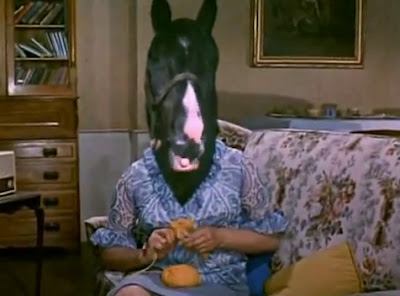 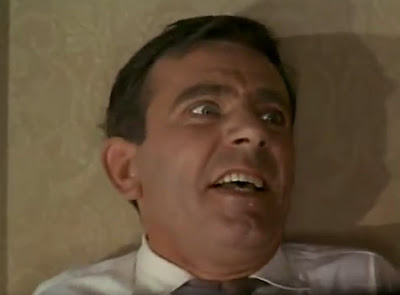 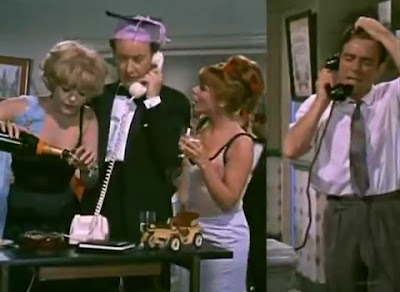 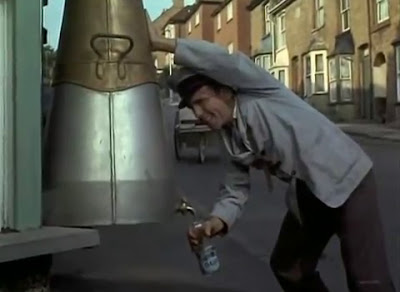 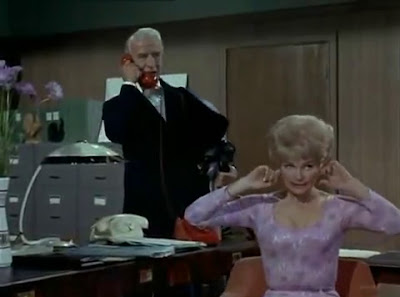 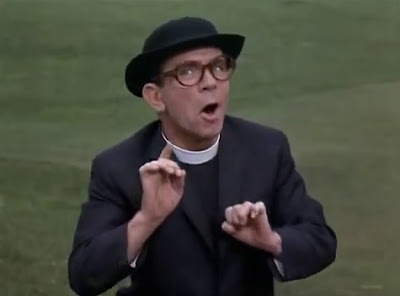 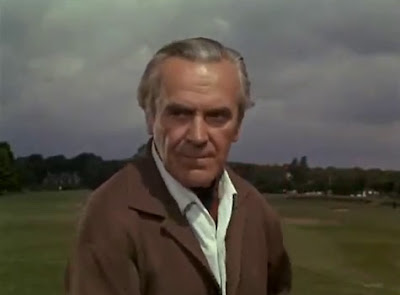 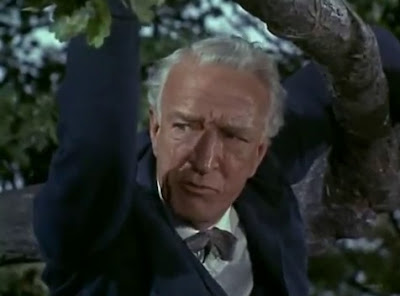 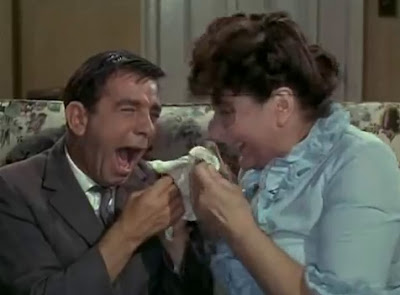 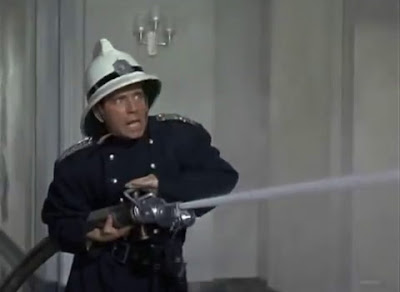 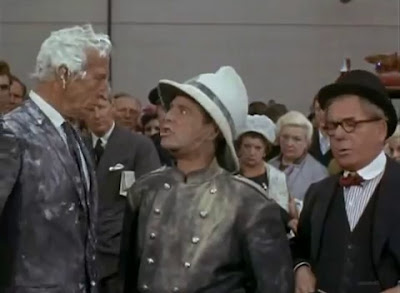