What was done, was done for our salvation.

A non-Hammer pairing of Peter Cushing and Christopher Lee, Nothing but the Night’s neglected status is a fair reflection that it is, mostly, a quite dull affair. Peter Sasdy’s film has been compared to same year’s The Wicker Man, with its mysterious goings-on on a remote Scottish island and particularly for its shocking sacrificial climax, but really, it’s only that shocking (and wholly bizarre) climax that marks it out for attention at all (probably spoiled if you watched it under the alternative title The Resurrection Syndicate, but at least not confounding expectations the way The Caste of the Living Dead would).

Indeed, for the most part Nothing but the Night is studiously procedural in tone, as if following the banal minutiae of the investigation of Colonel Charles Bingham (Lee), a semi-retired plod, and pathologist Sir Mark Ashley (Cushing) will somehow make the last ten minutes easier to swallow when it comes. I’d have gladly sacrificed such presumed reverence for a bit more action and drama.

After a coach driver seems to have set himself alight, resulting in an accident that leaves the children of an orphanage run by The Van Traylen Fellowship unscathed, Bingham is keen to get to the bottom of matters. Three trustees of the Van Traylen Trust have died in the previous six months, making the trust £5m richer. Dr Haynes (Keith Barron) attempts to get answers through hypnosis from Mary Valley (Gwyneth Strong, who ignominiously, went on to play Cassandra in Only Fools and Horses; she’s pretty good here), one of the children closest to the accident. Mary keeps talking about a consuming fire, “a nightmare where she feels she is being burned alive”.

On top of this, Mary’s mum Anna Harb (Diana Dors), a former prostitute who has just done ten years in Broadmoor for a triple killing, wants her daughter back, and journalist Joan Foster (Georgia Brown) is keen to stir things up in the name of a good story.

There are more than enough distinctive elements here to provide a hook then, and it isn’t clear just what is going on at any point; are the trustees up to no good? Is Anna, an occultist given to splenetic pronouncements such as “If you’re lying to me, if this is some kind of trick, I’ll kill you!” responsible? Or is something else going on? If it weren’t for the leftfield ending, you’d swear this was a tale of reincarnation. Although, it does turn out to be a (kind of) case of metempsychosis, just not in any expected manner.

Unfortunately, Sasdy, mostly a TV director who was also responsible for Hammers Taste the Blood of Dracula and Countess Dracula, the big screen Doomwatch adaptation and the rather good BBC Nigel Kneale The Stone Tape diligently fails to inject any life into the proceedings.

There’s the occasional moment (the murder of Keith Barron’s doctor isn’t exactly a Vera Miles in Psycho shock, but we’re pretty sure by this point he’s the young lead who will guide us through the picture), but endless scenes of Lee and Cushing debating the next move, or of Diana Dors wandering through scrubland as probably the most laborious red herring ever, has a good go at inducing a soporific response.

The ending, though. Dors has been set up so blatantly that few will believe she’s actually up to no good, but anyone expecting the Bingham trustees to be responsible is simultaneously undercut and validated as Mary revels herself to be one of their number. As Cushing explains, “They have used their power and their wealth to try and achieve immortality”, by “transplanting the nucleus of their adult knowledge, experience and personality into the minds of those children”. How? Well, employ a first-class biochemist and a brain surgeon and it can only be a matter of time before bob’s your uncle.

As explanations go, it’s risible, but the sight of Mary exclaiming to Bingham “You could have been one of us, you silly man. Now you’ll burn” is quite chilling in a Legend of Hell House possession by way of Village of the Damned kind of way. This after the reveal she put her not-so-dear mama on the bonfire. Any possibility that Lee will make amends for his indulgence of pagan rites in The Wicker Man is staved off, as Joan gets set alight by the convenient gust of Ashley’s incoming helicopter. The obliging remaining kids then go and jump off a cliff, which ties up any loose ends.

At one point a couple of drunks discover a ritually murdered child’s body, and it’s curious the number of British pictures around this time presenting an environment where children are no longer safe; this, The Wicker Man (even merely as a lure for Edward Woodward), The Offence. Perhaps they’re tapping into a post-Moors Murders mood, one more recently further embedded with the Red Riding Trilogy and post-Savile ongoing revelations.

I’d be very surprised if Ben Wheatley hadn’t seen Nothing but the Night, as it feels like the kind of fare he’d lap up. Brian Hayles, a frequent contributor to Doctor Who who also wrote for Doomwatch and gave us the screenplay for the seminal Warlords of Atlantis, adapted the screenplay from John Blackburn’s novel of the same name.

Cushing and Lee are reliable but don’t really have anything to dig their teeth into. Ironically, perhaps, as Lee conceived this as the first of a Bingham trilogy (he optioned two other Blackburn novels); his role in The Wicker Man, the same year, represents just the kind of anti-typecasting part you’d expect him to be aiming for, but I guess anything non-Dracula was a win at that point in his career.

Aside from Strong, it’s Brown who really impresses as the cynical journo in search of a story. Also featured are Fulton Mackay, a young(ish) Michael Gambon and Kathleen Byron (best known as loony Sister Ruth in Black Narcissus). Nothing but the Night really needs the viewer to endure 75 minutes of near nodding off to the ’70s scenery for its ending to have full effect, but I couldn’t really blame anyone skipping through it for the (actual) fireworks. 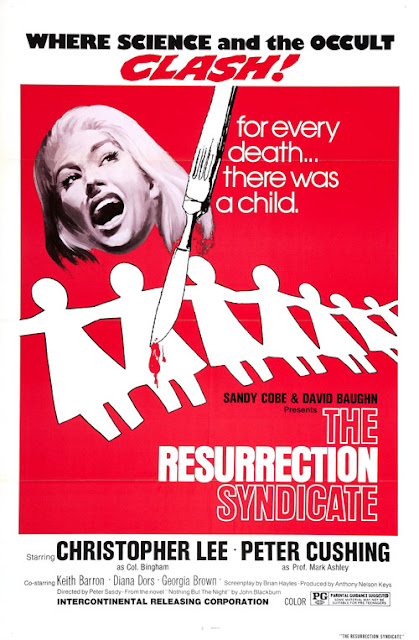 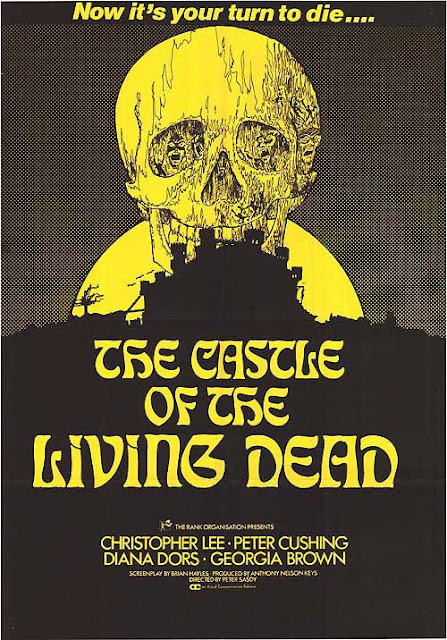