There is a time, when Jupiter and Saturn meet… they will receive you.

Twin Peaks
2.20: The Path to the Black Lodge

Stephen Gyllenhaal, mostly a TV guy, with the occasional film credit, directs another Peyton and Engels offering, and it’s one of the most satisfying of the second half of Season Two. A lot of that is down to it being Windom Earle’s best showing since Diane Keaton guest-directed.

There are other elements, non-Black Lodge related, of course. Andy informs us that Styrofoam never breaks down, Doc Hayward pleads with Ben to let it lie (“There’s nothing good about ruined lives”), who asks Audrey to enter Miss Twin Peaks, who pursues Billy Zane (he’s a cool dude), whose partner has been murdered and is off in his private jet. Audrey persuades him to deflower her and generally bump uglies. I have to admit to being unimpressed with the way in which she presses Pete into her service as chauffeur (“You!” she demands; he has a name, you know – Pete Someoneorother). Catherine and Andrew are still trying to open the box, while the dearly departed Gordon Cole has opened Bobby’s eyes to his neglect of Shelly.

Annie: What we observe is not nature itself, but nature exposed to our method of questioning.

Coop and Annie are going from strength-to-strength, noting (again) “We’re very much alike” and quoting Heisenberg to each other. Fortunately, lest things get unbearably cute, the Giant is on hand to wave a warning “No” at the prospect of Annie entering Miss Twin Peaks, when the mayor’s mike gives out.

Such weirdness is appealingly laced throughout the episode. Gyllenhaal gives a very Lynchian slow-motion close up of dripping gravy when some plates are smashed in the diner. Then there are the four incidents of hand tremors; a patron of the diner, Coop, and Pete all experience this (and Ben at very least experiences the accompanying sound effect). Commendably unexplained, it is most easily construed as a portent of the return of Bob through Earle’s opening of the Black Lodge. Accordingly, he his hand strains through into Twin Peaks reality in the last scene, and we see a reflection of the Red Room through the portal in Glastonbury Grove.

Special Agent Cooper: Windom Earle’s playing off the board.

Like most of the best episodes, there’s a wealth of (actually) funny business mixed in with the weirdness. Moving the human pawn from its perch on the porch entails much problematic manoeuvring, accompanied by a silver-suited man (it reminded me a little of hazmat guys in Repo Man). Andy, as usual, bursts into tears over the untimely demise. We learn that Windom Earle is no longer playing by the rules of the game (he “took another pawn but didn’t tell us his move”) and Coop consequently puts the trio of gals under close watch.

Special Agent Cooper: He’s been after something else all along – the Black Lodge.

Crucially, after his chat with Major Briggs (who shows them archive footage of a babbling Earle), Coop realises he has miscalculated his nemesis’ attentions. Earle isn’t focussed on vengeance on Coop; he wants to find the Black Lodge. Briggs informs us that “Earle was the best and the brightest among us” but after shifting his attention from UFOs to the woods he became “overzealous, secretive, possessive, violent”.

There is also much talk of dugpas. Coop sends (very bit player) Kevin to find out more. Fortunately, we have Earle to inform us the necessary more about these “ancient sorcerers bent on evil” Well, not that much. They’re “Another fine bunch of zanies, I can tell you”. This appears to be picking up on the show’s masonic interests again (training with dugpas suggested as the last step for a mason before becoming fully illuminated).

To the end of locating the Lodge, Earle abducts Major Briggs. In a classic slice of Peaks lunacy (possibly too broad for the tastes of some, but I was fully on board), Briggs is wandering the woods when he comes across a pantomime horse (the most memorable TV appearance by one this side of Rentaghost). Earle, at the front, greets the major enthusiastically (“Long time no see, Briggsy”) before shooting him with a tranquiliser dart.

Windom Earle: What do you fear the most?
Major Briggs: The possibility that love is not enough.
Windom Earle: Oh God, I shall weep.

Back at his shack, Earle uses the major as a dartboard and, having unsuccessfully interrogated him, shoots him full of haliperidol. The interaction between Don S Davis and Kenneth Welsh is a delight, and the playful-yet-sinister tone is perfectly pitched (“What is the capital of North Carolina?”: “Raleigh”). Earle elicits enough information from Briggs (“There is a time, when Jupiter and Saturn meet… they will receive you”) to discern that the petroglyph is a clock that tells the time, and that it is an invitation and a map to the Black Lodge; the missing information he needs. The last scene, with Leo screaming and Briggs staring, has a suitably unsettling and hysterical tone.

Windom Earle: Leo, stop dawdling. If you were outside you’d have trouble with pigeons.

But mostly, the Earle material is a lot of fun: the panto villain with his panto horse and his bumbling sidekick. From Windom dismissing Coop’s efforts (“You know Leo, the only thing Columbus discovered is that he was lost”) to his dismissal of Leo’s smarts (“Leo, it looks like you’ve finally found your calling” he comments of Leo’s role as a horse’s arse), Earle’s is deliciously cruel. Welsh and DaRae are a great double act (“Catch!” he instructs Leo before not throwing him an arrow).

Windom Earle: Oh, poor Leo. We’re all love’s fools, more or less. But you will learn as I have, the value of hate.

The best of this is dim Leo’s hilarious assumption that having procured the electro-shock buzzer he now wields power over Earle. He proceeds to point it at Windom, and each time he presses it convulses with shock. Welsh’s laughter is highly infectious (“No Leo, I’m begging you!”)

So this is good stuff, the kind of standard the series should have been meeting throughout its sophomore outing. It’s a shame it had to come right at the tail end. 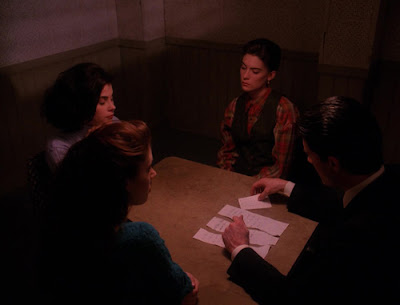 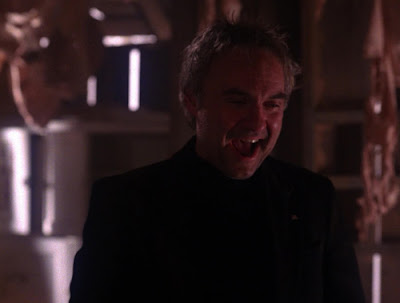 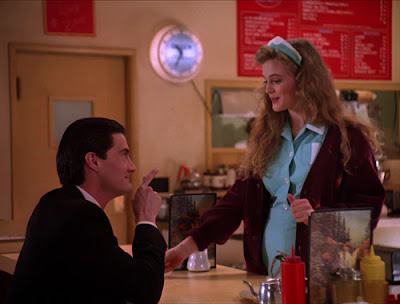 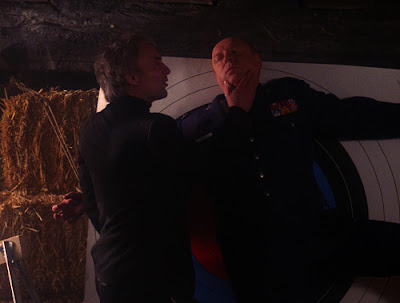 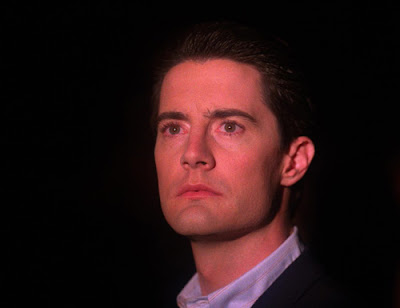 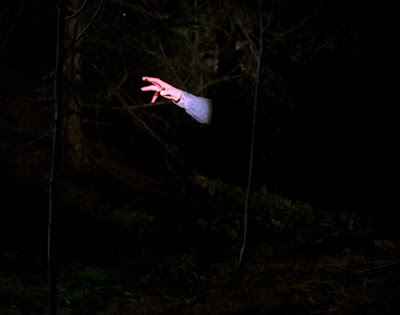 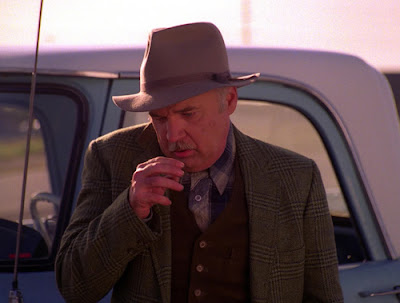