I haven’t been this excited since I punctured Caroline’s aorta.

The penultimate episode, and appropriately Tim Hunter (relied on to deal with Leland’s demise), gives it some welly for the inglorious Miss Twin Peaks contest. The contest may not be the greatest of climactic ideas, but Barry Pullman (in his last of four credits) ensures it services raising the tension.

Indeed, very little is actually distractingly slack here, although you couldn’t exactly call anything galvanising either. The contest judges, except for the mayor, are shown to be on the side of the angels. Norma hopes it will be a good day for healing, and Dick redeems himself while being mirthfully dismissive of Lucy’s revelation that she has decided Andy is the father of her child (pretty much mirroring the audience reaction, then).

Audrey is wearing a red dress, as a now un-virginal woman. Subtle that. She’s conspicuously absent from the leg-revelling and revealing dance number staged by sleazy Pinkle (he gets about, that’s for sure). Apparently, Fenn demurred from appearing. Honestly, who can blame her, as fascinating as it is to watch?

Big Ed: Norma and I plan on getting married.

On the Norma front, Ed announces they are to wed, which results in Nadine claiming she and Mike are to do so too (Nadine is hit on the head at the climax, which bodes ill for happily-ever-afters). Donna issues an ultimatum to her parents, then has Ben reveal the truth at the contest, in not so many words (“You’re my father?”) Andrew shoots open the last remaining puzzle box to reveal a key (“And where there’s a key, there’s a lock”). All these pay off in arresting ways in the finale, which is something. There’s also a jolly bit where a labourer appears to be taking a plastic deer from behind.

Richard Tremayne: She gave a beautiful speech. Inherent in her message were words even the most craven of us could ill afford to ignore.

During the pageant, there’s some weird business where Pinkle is either getting over-excited or fresh with the Log Lady. Quite disconcerting either way.  And Lucy showcases her dance moves (Wendy Robie getting to show she’s not just a squeaky voice). Lana’s “contortionistic jazz erotica” isn’t really all that, truth be told. But neither is Annie’s Coop-scripted, Sioux-quoting paean to saving the Earth.

At least Coop is in full Zen mode again, informing Diane he has been “struck again by the realisation that all of us on this great big planet Earth live in only a fraction of our potential” and how Annie is “a completely original human being”. There follows an innuendo-stoked scene where Coop tells Annie “Your forest is beautiful and peaceful”, leading her to comment, “I don’t want to talk about trees any more”. As if that’s what they were doing.

Windom Earle is, as last week, the life and soul, although less vocally so this time. His curious arrival back at his shack reveals him with an ashen face and blackened mouth, no doubt having prepared himself in some manner for his entrance to the Black Lodge (working up enough fear?) Does he also have a death bag? Well, he has a bag. Leo, a very late-hour hero, ensures Major Briggs’ escape so as to save Shelly. Very touching. I’m not convinced of Windom’s leaving Leo tied to a box of spiders, however. A hand grenade might have been more convincing.

Windom Earle: I haven’t been this excited since I punctured Caroline’s aorta.

Earle’s disguise as the Log Lady is a stroke of absurd genius. Not only for the sheer spectacle, but for the subsequent moment where he beats a deserving Bobby over the head with his wooden companion (“So what? Did you bring the whole family?” Bobby inquires, assuming several of her log wielding clan are present, the clod). He makes off with the Queen of the Pageant of course, at which point, amid the dry ice and strobe effects, Coop has his first glimpse of his former partner during the show’s run.

The investigative side is a little less self-assured. It’s a nice touch to have Andy diligently inspecting the petroglyph throughout, and being key to deductions, but the actual conversations and connections don’t flow as tidily as they ought. We go over what we already know about the door to the Black Lodge opening when Jupiter and Saturn are conjunct, and how fear and love open the doors (“Two doors, two lodges”). The donor of the bonsai is also revealed when Andy accidentally knocks it over. Coop is basically concluding what Windom Earle already knows, and filling Harry in on Josie’s death. It’s necessary, but none too elegant.

Special Agent Cooper: I think the Black Lodge is what you have referred to in the past as “the evil in these woods”.

Davis is on great form once again as Briggs, shaking his hands and uttering gibberish about the King of Romania. With Lynch back to helm the finale (scripted by Frost, Engels and Peyton, but with more than enough peculiarity to evidence the additional input from Jimmy Stewart from Mars), the weirdness is impressively upped but for whatever reason the involvement of Windom Earle is negligible. So it’s worth saying here that Kenneth Welsh is crucial to the success of the last half of Season Two, providing an irresistible energy in his every scene. And, as far as cross-dressing goes, he gives Duchovny a run for his money. Possibly even Michael Caine in Dressed to Kill. 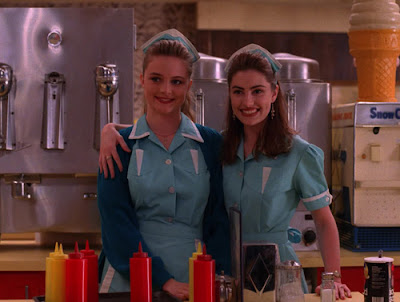 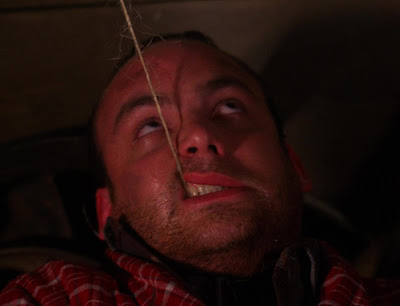 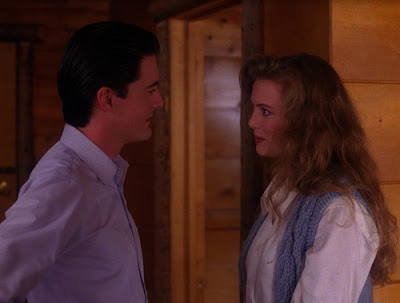 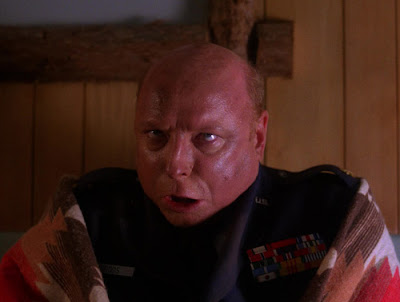 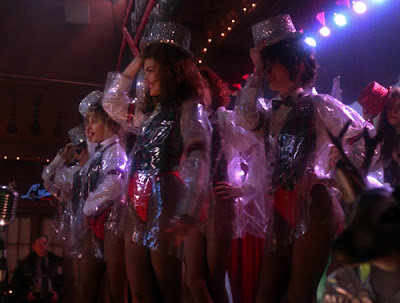 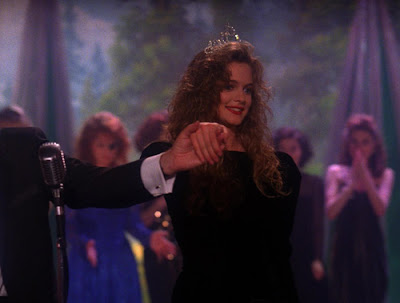 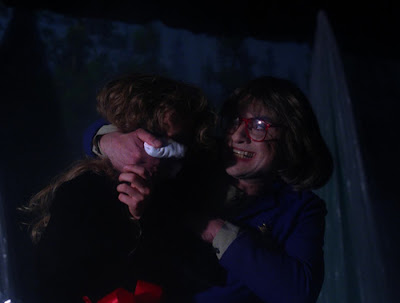