Fellas, coincidence and fate figure largely in our lives.

The Windom Earle/quest for the Black Lodge storyline is fully under steam by this point, so the shortcomings of the supporting plot threads aren’t deal breakers. Albert has gone but, like last time, Gordon Cole arrives to replace him. With him and Coop and, as the unofficial title suggests, this one is all about blossoming romance.

Harry: How long have you been in love with her?

Coop’s whirlwind succumbing hook, line and sinker for Annie is front-and-centre, and MacLachlan plays the unabashed sincerity appealingly. Coop even tells a joke (“Two penguins were walking across an iceberg…”) Graham is a lot better than her material, truth be told. The one hook the writers have is that she’s a convent girl, and the dialogue often lacks finesse (“Some people think I’m strange”; “I know the feeling”) but two actors play it for all it’s worth and it’s impossible not to wish Coop and Annie the best.

Gordon Cole: Holy smokes! Who is that?

Lynch fares much better as Cole here than in his previous appearances. Well, I say that.  Cole’s passion for Shelly, a woman half his age, might be seen as a reflection of Lynch himself (given rumours). It’s not really something to be celebrated. One might argue that such winking naughtiness is part and parcel of Twin Peaks. As played, it’s difficult to take anything less than a bit of fun away from it. Particularly with Mädchen “Madgkin” Amick so clearly amused by the goings-on. Fenn may have attracted the most press at the time, but of the trio of female leads Amick is by far the most engaging on revisiting the show (Boyle trails a distant third).

Gordon Cole: I plan writing an epic poem about this gorgeous pie.

Cole is provided a stream of humorous dialogue, from his guileless lust for Shelly (“That’s the kind of girl to make you wish you spoke a little French”), to his confession of her beauty (“I feel as if my stomach is filled with a team of bumblebees”), to his need to cool down (“And a glass of water. My socks are on fire”). Then there’s his miraculous ability to hear normally in her presence. This kind of thing is Peaks at its broadest and best; it’s irresistible.

Special Agent Cooper: You take a glass of nearly frozen, unstrained tomato juice. You plop a couple of oysters in there. You drink it down. Breathe deeply. Next, you take a mound, and I mean a mound, of sweetbreads. Sauté them with some chestnuts and some Canadian bacon. Finally, biscuits. Big biscuits, smothered in gravy. Now, here’s where it gets tricky. You’re gonna need some anchovies.

Harry (unwell and exiting for the bathroom): Excuse me.
Special Agent Cooper: That should do it.

Less irresistible, but still amusing, is Harry’s episode-long hangover. He sorts out Jones in short order (her method of despatching the sheriff is on the elaborate side, but I guess that’s part of Eckhardt’s revenge schtick) and then has to suffer Coop and Cole making him feel queasy with hangover recipes.

Harry: What do you recommend for a hangover?
Annie: Teetotaling and prayer.
Harry: Good answer.

In the also-ran plotlines, Donna follows her mum to the Great Northern where she is meeting with Ben. She also gets a boring postcard from boring James (“I’ll be back with a million stories, I promise”; luckily, he’s lying). Mike and Nadine book out of the hotel after booking in last episode (still in disguise). And Audrey comes on strong to Billy Zane (“Maybe I’m ready now”). He’s a cool dude. She’s given more responsibility by her father too (yawn). Who has been given some unreliable advice by Zane, in context (“Just keep your eyes on your heart and always tell the truth”).

Windom Earle: Good for you! It is incumbent on the young to disobey.

Audrey at least gets to hobnob with Windom Earle in the local library. He is posing as the be-piped Professor Perkins, complimenting her on the merits of civil disobedience and informing us ignoramuses that the poem he sent to the girls is by Shelly (the poet, not Johnson).

There’s more background on Windom Earle’s involvement in Project Blue Book, with Gordon delivering the classified portion of the Windom Earle dossier. If it seems like the writers are taking advantage of Twin Peaks’ capacity for coincidence to justify clumsy writing, that’s probably the case. That Earle should have been studying the very place Coop gets called to on a murder case is a fair old stretch. He also faked his madness with Haloperidol (taken by the one-armed man to repress Mike).

My favourite Earle moment comes when Cole yells into the Bonsai tree containing Windom’s surveillance microphone. He’s maybe not at his most proactive here (he plays catch up, following Coop to the cave for the climax) but he’s still full of threats, employing belching Leo to pick cards depicting the trio of queens and “Little Dale’s” king (“You get to die a royal execution and Cooper gets to watch”).

On the offbeat front, Johnny is back and firing arrows, and Andy is unusually granted a welcome bit of weirdness, abseiling past Lucy’s desk in practice for some spelunking. Coop has been reinstated, so he is officially leading the way again, although through the kind of clumsy linking of material I noted above; long departed Annie just happens to come up with a solution to the Briggs and Log Lady designs combined by Coop (“looks like the one up at owl cave”).

The cave business doesn’t perhaps feature the best design work for the all-important petroglyphs. A very stagey diamond shape detaches itself from the “rock face” when Andy embeds an Arthurian pickaxe in it (reacting to a pesky owl). It does, however, show of high-beam torches that would make Mulder and Scully proud. Coop may be promising a place “both wonderful and strange” as their ultimate destination, but the idea of what they’re up to here is more intriguing than the scripting and execution. Still, this is the show picking up a head of steam. 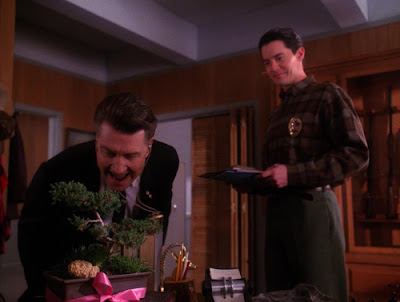 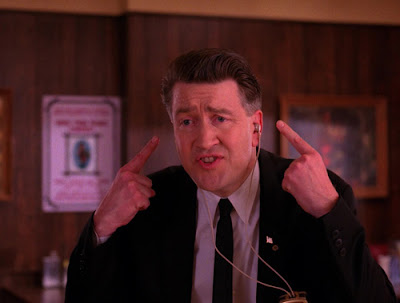 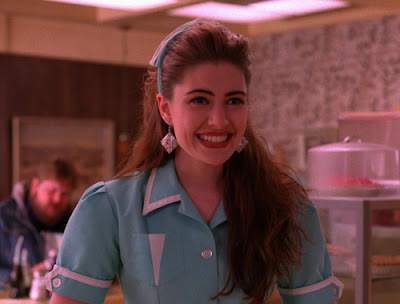 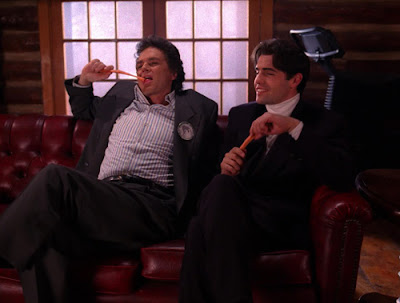 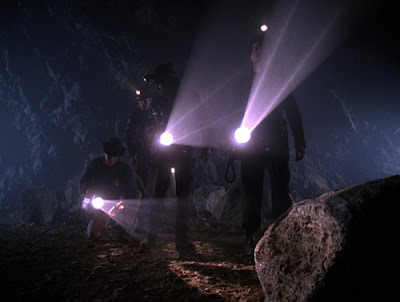 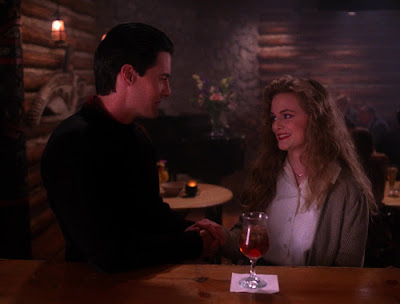