Their motivation in search of the White Lodge is not ideologically pure.

The first in a brief run of name directors, as Uli Edel gets on board. This would be the shape of things to come for the director. He made the acclaimed slog Last Exit Brooklyn prior to this, but next came the ridiculed Body of Evidence. TV heaven beckoned after that. Mark’s brother Scott handles scripting duties for the second and final time. There’s a definite uptick here; much dead wood prevails, but you can feel a re-ignition of drama and engagement.

Special Agent Cooper: Windom Earle is a genius. And he’s taken his first pawn in a very sick game.

Finally, then, we meet Windom Earle. He’ll be a constant until series’ end but I’ll save comment on Kenneth Welsh’s uproariously demented performance until the next episode. Here he functions as little more than a reveal. One wonders how much the deathly seriousness with which Coop takes him is intended as misdirection, since when we do see him he’s the most welcoming of loons. Coop is full of dire warnings and over the onset of his evil (“Windom Earle has been in this room. I can still feel his presence”).

Special Agent Cooper: Windom Earle and I played a game every day for three years.

Coop has been cleared of all criminal charges, but his suspension still stands. He unloads a swamp full of exposition on Harry, including how he never beat his nemesis at chess, and “He felt that all of life could be found in the patterns and conflicts in the board”. Most particular is Coop laying bare what could be deduced already; Coop and Caroline, Earle’s wife, fell in love, she died at Earle’s hand.

Special Agent Cooper: I think he killed her and I think he committed the crime she originally witnessed. Windom Earle’s mind is like a diamond. It’s cold and hard and brilliant. I think he feigned the insanity that sent him away but at some point, he lost the ability to distinguish between what’s right and what’s wrong.

It’s curious that Coop proffers “You don’t know what he’s capable of, Harry. You don’t know”. My recollection is that we don’t learn exactly what Earle did to earn such dread on Coop’s part. Surely most of this would be speculation on Coop’s part, Earle didn’t embark on a slaughter spree before ending up in the nut house.

The Audrey-Bobby camaraderie is beginning to lose its initial flair, with her suggesting he should tag along if he wants to get rich. Far better when Bobby finally gets his arse into gear and (attempts to) comes to Shelly’s rescue. This scene has a tension not seen since Leland’s reveal, and there’s more than a touch of the slasher film villain to Leo rampaging through the window, stuck in the leg by Shelly (she ends up rescuing Bobby). Or Frankenstein’s monster, as Bobby succinctly notes next week. It’s after this that Leo finds Windom’s cabin in the woods (“It’s all right. I’m a friend. Come sit”).

Major Briggs: Their motivation in search of the White Lodge is not ideologically pure.

Major Briggs will feature in Windom’s personal mission, as the quests for lodge secrets dovetail. Here, we discover that Briggs has become disillusioned with his bosses, who are exhibiting “a degree of suspicion and control bordering on paranoia”. It’s nice to see the military man with a conscience decide his personal code takes priority over orders (even when “That’s classified”). Briggs believes he was taken to the White Lodge during his disappearance. Like Coop he is full of portents of doom, warning of much trouble ahead, and that he will return “But Until that time, I will be in the shadows if you need me”. He also, with Coop and Harry, drinks down a long glass of water.

The little Nicky plot continues to be second only to the Adam Sandler movie in edginess. Lucy announces Andy and Dick are “not fit to be fathers to a chimpanzee”. On the upside, Dr Hayward’s account of Nicky’s entrance into the world has an appealing air of over baked pulp fiction. His mother was a poor itinerant chambermaid and Nicky was conceived in an assault in a back alley. Even worse, she died giving birth to Nicky! The humanity.

A few of the other less than stellar plotlines also show a flicker of enthusiasm this week. It’s rather nice to have Ed and Norma find happiness, with the news that Hank has been booked for parole violation (he makes one more appearance in the show). Dr Hayward gets another humour-laced scene discussing Nadine’s sexual dynamism; Ed Wakes up every morning and feel like “I’ve been hit by a timber truck”. The doc’s advice to Ed is to “Be patient and have her home by 9 o’clock on school nights” which is perfectly useless advice but quite funny. Talking of timber, Hank claimed a tree fell on him (rather than Nadine).

Dr Jacobi: What he needs right now is both your understanding, and a Confederate victory.

As for the Ben/American Civil War saga, it could amount to dynamite viewing but with the arrival of Jerry and Dr Jacobi (sitting on a perch, taking notes), it actually has a bit of zest. Jacobi, in his only-in-the-movies manner, suggests Ben can regain his faculties through enacting a Confederate win, which requires the pitching in of his nearest and dearest.

Jacobi’s also on hand with Lana Budding Miflord, a subplot so slender they must have been really desperate to approve it. The mayor turns up at the police station with a gun, and refers to Jacobi, who has spent the last 24 hours with her and noted her heightened sexual drive, as a hippy. Rather satisfyingly, Coop plays clever cupid and shuts the mayor and the widow in a room together to talk things through. Presto, they are engaged and “We decided to adopt a child”.

Edel does his best, but he can’t inject drama into dozy James realising he has been set up for the murder of Evelyn’s hubby (brake failure). Luckily, Donna is on hand to help him escape (that wet, but curiously catchy song with a high-pitched James singing is also on tap). No more electrifying is Pete reacquainting with Andrew, or the arrival of Thomas Eckhardt, coming to Twin Peaks “like a rat to cheese”.  The metaphor is as basic as they get and, despite the welcome appearance of David Warner, this plotline has some heavy lifting to do if it’s going to become engaging (that I can’t remember if it does suggests otherwise, although I readily recall Warner).

Next week makes good on the promise here and then some, as unlikely special guest director Diane Keaton throws everything into an episode brimming with pleasurable little asides. Even if no one else bother, she clearly took note of Lynch’s predilections and strange fascinations. 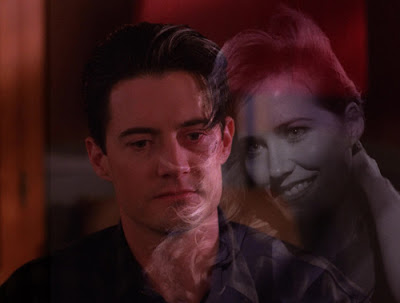 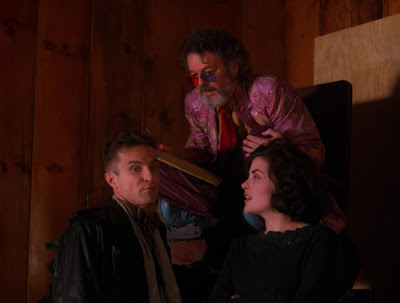 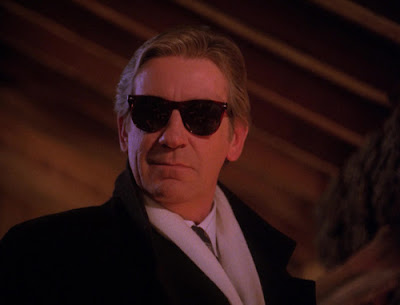 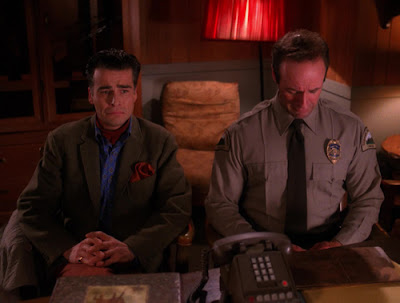 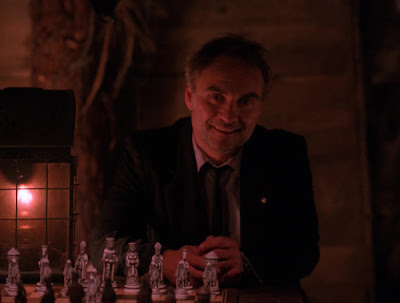