The Drop is a very pleasant surprise. I had the impression it was rather tepidly received by critics (although the “arbiter” that is Rotten Tomatoes suggests otherwise), and I haven’t been overly impressed with past adaptations of Dennis Lehane material (even the best have been lacking something). This one is self-adapted from his short story and, while it’s not without its flaws, it is anchored by a powerfully magnetic performance from Tom Hardy, underplaying yet simultaneously sucking all the attention in the room his way. Director Michaël R Roskam complements him with deceptive sureness of tone, exerting a grip despite an unhurried, measured pace.

The film, originally known as Animal Rescue (an understandable title to change, but The Drop is so nondescript, it’s no wonder it didn’t get much notice), went largely ignored by the public. It seems destined to be noteworthy only as James Gandolfini’s final role, rather than for its content. In respect of his performance, there isn’t anything very remarkable here; Gandolfini’s done this kind of thing many times before. He’s dependable and professional, but Marv, former owner of the Brooklyn bar that is now used as a money drop for the Chechen mob, is a familiar type; a low-level guy without the stones to make it bigger in the criminal world but the need for cash and a means to get some.

Bob (Hardy) is Marv’s cousin and the bar tender. He comes across as slightly slow and internalised, a man who dutifully does what he is told, lives in his deceased parents’ house and frets over having a dog because of the responsibility. Bob appears to be a bit of a soft touch, allowing a regular to run up a tab, giving out free rounds and at Marv’s beck and call. And for a long time, it’s difficult to gauge where he’s coming from. Part of the fascination with The Drop is figuring Bob out.

When the bar is robbed, and the Chechens’ money taken, Bob’s response is not fearful. And when the arm of one of the robbers shows up in a bag full of money, Bob’s response is to carefully (obsessive compulsively?) wrap up the arm in cellophane before dropping it in the river. This contrasts with his reaction to Nadia (Noomi Rapace). After finding an abandoned puppy (Rocco) in her trash, he strikes up a tentative relationship based on her dog knowledge. But Bob is very backwards in coming forwards, shy and diffident. And her ex, menacing lowlife Eric (Matthias Schoenaerts), is given to showing up at his house and threatening him.

Lehane’s script only gradually reveals Bob, and even come the credits he leaves us to fill in the blanks. As we discover Marv was behind the robbery, so Bob’s light begins to seep from under the bushel (“Are you doing something desperate? Again?” he asks Marv, who drops hints of Bob’s concealed potential throughout). Is he really going to submit to Eric, give him ten grand to keep Rocco? The reveal of Bob’s steely resolve isn’t as in a flash, when all of a sudden, we discover someone isn’t who they appeared to be. Bob kind of is who he appears to be.

Bob’s someone who allows himself to be what people think of or project on him. He’s unassuming because others think he’s unassuming, and because it means no one is looking his way. But he also inhabits the role he has fashioned for himself. He will only take what is readily within reach, and even then, he is nervous of such attachments. This explains his curiously limited analysis of why he kills Eric (“He was going to hurt our dog”), which might suggest a morally unplugged or empathically disconnected inner life (but which is contrasted by his perceptiveness throughout, be it correcting Marv on the pronunciations of Chechens or revealing to Nadia why he never brought up her scars). He let Rocco become part of the tiny microcosm of things he cares about, and his personal code knows no limits under those circumstances (which is why he killed Richie Whelan for Marv all those years ago). It’s why he is more comfortable with Nadia running away from him; he rather expects her to confirm she wants him to “stay away” at the end.

Bob isn’t unveiled as your standard issue sociopath then, but he lives in a world where diminishing himself is protective. He doesn’t embrace his capacity for violence, which is why he doesn’t take communion and doubts there is forgiveness for what he has done, and it’s probably why he keeps Whelan’s body in the oil tank in the basement (to be mindful of what he has done, and what hangs over him). When he says to Nadia, “No, I’m not them. And I’m not this” he isn’t. But he has the capacity to be both.

This is a fascinating, riveting performance from Hardy, and primary evidence, if any were needed, of why he’s one of the best actors working today. When Detective Torres (John Ortiz) says “No one ever sees you coming, do they Bob?” it’s a “cool” moment, but one that is a little over-conflating. Bob isn’t a Keyzer Soze-like mastermind leading a double life and retreating to the shadows. The fade to black before Nadia returns (we hear her footsteps) isn’t a “Will she, or won’t she?” so much asking if Bob can adapt to her presence in his life or will he ultimately be compelled to retreat from this involvement and confronting himself through her.

Hardy is so consummate, it’s a shame some of the surrounding elements aren’t so well handled. Rapace is fine, but her role is barely there. The Torres subplot expounds every dogged cop cliché going. And having Chechen gangsters, in the same year as The Equalizer, The November Man and John Wick (another picture that revolves around a faithful pooch) seems like everyone has the same go-to Eastern European gangster locale. Schoenaerts is suitably slimy as Eric, though, a believably intimidating presence even up against Hardy, while Ann Dowd has a couple of scenes as Marv’s sister and makes the most of them.

There appears to be a subtext about lost causes here; it’s notable that Marv’s choice is, on the surface at least, motivated by a wish to do the right thing. He needs to pay his father’s care bills. Yet his father is in a vegetative state, and his sister is able to face the reality that it’s time to take him off life support. Marv’s inability to do likewise, in the same way that he can’t accept that he no longer has any street cred, is his undoing. In contrast, the more perceptive Bob sees the battles he cannot win, and is even reluctant to put himself out there with ones he can (a discarded dog, a possible relationship).

As I say, I’ve been less than effusive over other Lehane movies. I found Mystic River obvious and manipulative, Gone Baby Gone fundamentally miscast and ultimately contrived, and Shutter Island barely had enough material to sustain a Twilight Zone let alone a two and a quarter hour movie. Yet The Drop, easily his least recognised picture, is by far his most thought provoking and resonant. And coming hot on the heels of Locke, The Drop is further evidence not only of Hardy’s mesmerising screen presence, but also how accomplished an accent actor he is. 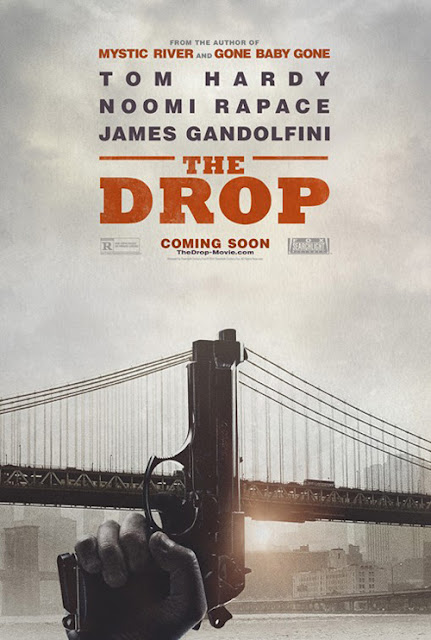