I look forward to hearing more about this White Lodge.

A crock of a title for a crock of an episode. Maybe that’s going a bit far (the episode bit; the title stinks). There are several good scenes here, and Kyle MacLachlan’s sterling work very nearly saves the day, but Dispute Between Brothers is a spectacularly misjudged epilogue to the Laura Palmer murder plotline, and makes matters worse by picking up a selection of rum and disconsolate new ones to run with.

Agent Cooper: Mrs Palmer, there are things dark and heinous in this world. Things too horrible to tell our children. Your husband fell victim to one of these long ago when he was innocent and trusting. Leland did not do these things, not the Leland you knew.

The most egregious part first, then. It’s three days later, and Coop is visiting with Sarah Palmer. The most striking thing, now we’re out the other side, is how good Grace Zabriskie always is in a wholly under-nourished role. Even when, as here, she is given clueless material, she injects incipient breakdown into her scenes, Sarah’s mind struggling to grasp at the terrible things that have befallen her family.

This scene is a further case of over-exposition, of the variety seen at the backend of the previous week’s instalment. Coop’s sentiments are there to bludgeon home the point about Leland, how “Before he died he confronted the horror” and Coop’s interpretation that of Laura from beyond that “she forgave him”. It’s a rather stodgy attempt to draw a neat line under the disturbance and upheaval of the case. MacLachlan is great, though, making Cooper empathic, sensitive and caring (“Mrs Palmer, I would be honoured to drive you”).

The wake is where the episode really goes awry. There’s absolutely no attempt to integrate the fall out of last week’s events into the townsfolk. The result is spectacularly misjudged; everyone is laughing and joking as if nothing horrendous has just happened. They should be acting like a bomb has gone off. And where’s the remembrance of recent victim Maddy? A monster has been exposed it the midst of Twin Peaks, and it beggars belief that people are going to show up and fondly remember him. That wouldn’t even happen if Coop took the time to explain to each inhabitant in turn his precise interpretation of what possessed Leland Palmer and how he wasn’t really responsible.

What we are served is a selection of weak comedy moments and everybody acting like they’re attending a cocktail party. There’s Nadine being seventeen again (“Can you see my underpants in my shoes?”), Jacobi back from vacation, and two old giffers arguing (the mayor and his brother, hence the inane title). It’s all very odd and inappropriate. This is the first of two credits for Tricia Brock as writer and second of two directing gigs for Tina Rathbone. Neither acquits herself with honours.

Coop has no reason to be in Twin Peaks anymore, so one must be contrived to keep him there. The investigation into his misfeasance (“The improper and unlawful execution of an act that is itself proper and lawful”) is consistent at least with a fairly unexciting plot thread already established, but it’s a struggle to make this interesting.

Clarence Williams III is suitably hard-nosed as FBI Agent Roger Hardy, warning Coop of concerns over his motives and methods (“allegations regarding cocaine possession”) and there’s an evil Mountie in the pocket of Jean Renault (RCMP Officer Preston King, played by Gavan O’Herlihy). Coop must surrender his badge and gun, while Harry has his back, as Coop is “the finest lawman I know”.

Audrey: Friendship is the foundation of any lasting friendship.
Agent Cooper: Well, it’s nice to be quoted accurately.

Better is Coop’s exposition-friendly scene with Audrey (“Save my life and break my heart”). It’s a reminder of the chemistry between the two, even if it’s in the service of establishing Windom Earle’s beef with Coop (“She died in my arms, I was badly injured, and my partner lost his mind”) and tick boxes with his reticence over romantic entanglements.

Between this and the final scene, there is also Coop’s not-to-be farewell, which deserves mention for the nutty idea that the Bookhouse Boys give out arm patches. Way to go to announce your secret society, Harry.

Major Briggs: Have you ever heard of the White Lodge?

The final scene gets to the meat of the thing; as I say, it’s a shame significant chunks of the episode are so ropey since others stand out (this will be the case going forward too).

Cooper and Major Briggs have gone out “for an incredibly pleasant evening of night fishing”, or at least that was the intent. Instead they appear to be sitting round a fire eating marshmallows. They debate the existence of Bob and how Coop is “blessed with certain gifts”. Just as we are getting to the juicy stuff, Coop feels the call of nature (“There’s nothing quite like urinating in the open air”) and goes for a whizz (but not on an electric fence). At which point Major Briggs is abducted by aliens, or near enough. It’s a combination of that, the flying owl familiar of Bob, and am Evil Dead-style restless roving camera in the woods.

Most of the rest is so-so at best. Catherine talks to Harry, and gives her own supernatural story that isn’t really all that (her guardian angel led her to the safety of her childhood summer cabin when she escaped the mill fire). She only returned because “I ran out of tuna fish”. Since that part is clearly BS, perhaps the whole thing is (a mocking nod to Leland’s torment by a demon from his childhood?)

Nadine is admitted to back to school and is trying out for cheerleader, in what is hands down one of the most annoying of all the Season Two annoying plot threads. This comes complete with throwing classmates about the place, to one of Badalamenti’s less restrained musical accompaniments.

Which brings us to Bobby. The Bobby/Ben plotline is also going to flail hopelessly, but his scene with Audrey is a great one. She’s in great mettle, questioning his borrowed, from Leo, attire (“Are you supposed to be a lounge bird?”) and coming out with the kind of provocative language you want to hear Audrey coming out with (“School numbs my buns”, asking Bobby to buy her an ice-cream, and advising “I like to lick”). Her aiding of Bobby doesn’t wash with Ben, who expels him as “a bug in my office”.

The other incidents of note concern Norma and family. The less said about the Hank and Ernie the better (Ernie is introduced to Jean Renault). At least Norma’s feud with Vivian is provocative; she discovers her cold-hearted bitch of a ma is actually food critic M T White and has given her a slating. Peggy Lipton’s a sympathetic performer, but one of the Twin Peaks faithful who was rarely used well. This is a kind of “blah” plotline, but she still sells the dignity and disappointment in her parent (“I don’t want to be hurt by you anymore. Goodbye”).

2.10 might scrape a three-star rating if it weren’t for the cluelessness of Leland’s wake. It’s a clear announcement of the show dropping the ball now Lynch’s (and presumably Frost’s too) attentions are elsewhere. If the sub-standard material introducing itself as subplots looked like it couldn’t get any shoddier, there’s still James’ road trip to come. 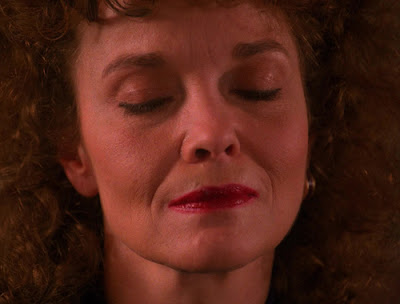 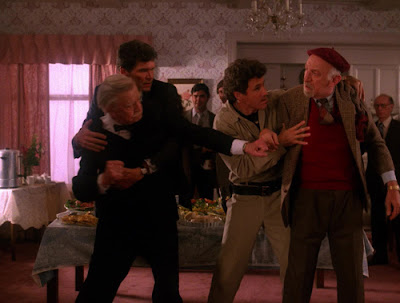 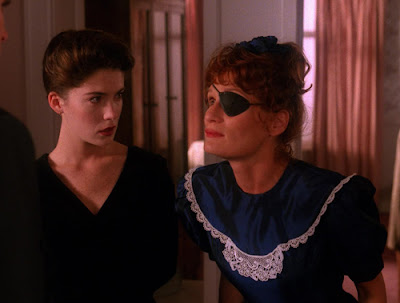 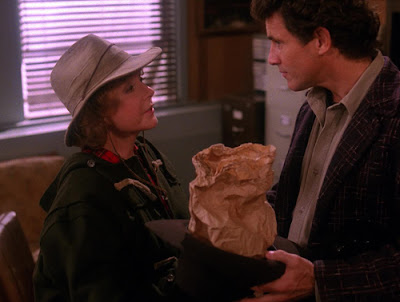 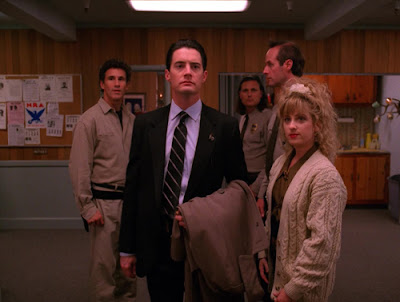 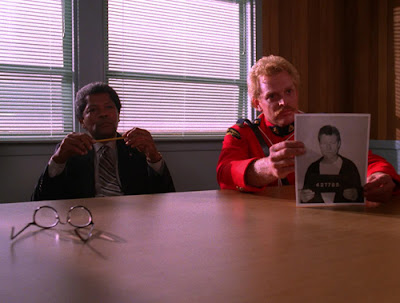 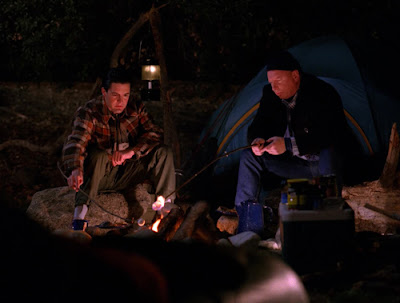