The absolute plus points of even these dreary, shapeless between-two-stools midpoint episodes is the performance of Kyle MacLachlan. To give an idea of the abomination of desolation the show is entering, this is the one where James arrives at Wallies, on his road trip. It’s not all bad, though. David Duchovny is on board as a very game DEA agent Dennis/Denise Bryson.

It’s a shame Duchovny’s stint on the show was during this wilderness period. Fun as he is, the writing isn’t exactly a powerhouse (the second of four credited to Barry Pullman, while Duwayne Dunham directs his second of three). Thus, Denise’s raison d’être here is to bring in her lifestyle change in as a reference point to any given topic of conversation. The chances of Denise reappearing in the Lynch reboot are probably zero, what with Duchovny filming The X-Files, but both Denise and Albert really deserve to figure in the 25 years later Twin Peaks.

Denise Bryson: Well, my recent experience has taught me never to judge too quickly.

Denise is sympathetic to the notion Coop has been stitched up (“It sure looks like a frame, Coop”). Hawk displays some latent homophobia, opting not to shake Denise’s hand, although then he gets thrown a one liner (“That’s a good colour for him”). One thing about Michael Horse being given more dialogue, it emphasises how stiff a performer he is. The highlight of Denise’s first episode comes at Mayor Milford’s wedding, when she dances with dozy Andy. Duchovny appears to be having good fun throughout, and bears a passing resemblance to Jennifer Grey (although don’t tell Matthew Broderick I said so).

Gordon Cole: Couple of words of advice. Let a smile be your umbrella.

Lynch is back, on the squawk box only though, offering Coop all the best for his inquiry. In a foreshadowing of the cable network of next year’s revisitation, Coop’s hearing is introduced with “Agent Cooper, it’s show time”.

The blessing of this rather pedestrian filler material is that Coop is allowed a likeably stoic-Buddhist acceptance of his fate. He announces, “I have no defence and I am completely confident in the righteousness of my actions”. Nasty Roger reacts to this by basically calling Coop a pansy, but he can’t rile him (“A man who doesn’t defend himself, well he may be packing feathers where his spine is supposed to be”). Told that he is liable to be extradited for murder and drug trafficking, Cooper simply replies, “These are things I cannot control”.

Coop’s been smoking what Albert has, it seems. It’s a great little speech, and the bafflement of Roger is particularly appealing. When Roger suggests he’s nutso (“I may recommend a full psych work up”), Coop doesn’t care at all (“Thank you for your candour, Roger. So long, fellas”).

Agent Cooper: Have either of you fellas hear of a place called the White Lodge?
Harry: Cooper, you may be fearless in this world, but there are other worlds.

Last week came first mention of the White Lodge. This time it’s the turn of the Black one. Hawk informs Coop of the local legend that the White Lodge is “where the spirits that move man and nature reside”. But that’s not all.

Deputy Hawk: There is also a legend of a place called the Black Lodge, the shadow self of the White Lodge. Legend says that every spirit must pass through there on the way to perfection. There you will meet your own shadow self. My people call it, ‘the dweller on the threshold’.
Agent Cooper: ‘The dweller on the threshold’
Deputy Hawk: But is said, if you confront the Black Lodge with imperfect courage, you will utterly annihilate your soul.

It’s to the credit of Frost et cal that this is pretty much picked up and run with in the season finale. Or at least, Coop is left in grave danger of that happening/having happened. It’s curious that elements integral to the series’ mythology should be introduced in episodes that are otherwise humdrum at best.

Agent Cooper: Well, he certainly has a renaissance passion for exploration, doesn’t he?
Betty Briggs: That’s how he sees himself.

On the lodge subject, there’s also an irregular appearance from Charlotte Stewart as the Major’s wife Betty. She admits that the Major talked of the woods constantly and, in a lovely little shut down, responds, “That’s classified” when Coop asks if the Major was attempting to contact some element that lives in the woods.

More firsts, as we hear from Windom Earle when Coop receives a latest chess move (“P to Q4”). He informs Coop he’s even prepared to sacrifice his queen as, amid a slew of chess metaphors and actual chess, refers to “You with your wounds, I with mine”. This audio visit actually works reasonably well, building up anticipation. In fact, the foreshadowing in the last couple of episodes has been commendable and creditable. It’s just a shame about the main meat.

Top of the list of write-off subplots is James riding off in search of himself and finding Evelyn Marsh (Annette McCarthy) in a bar. If this had any edge or personality to it, this plotline might be a workable as a noirish Double Indemnity style homage. Alas, it’s a complete snooze, with faux-hardboiled dialogue (“Men are always alright right up until they pull the trigger”) and James Marshall doing his singular best to show how dull James ever is (“Well, I’m quiet on the outside”). James even wears dull, sensible sweaters.

On the other hand, another crappy plotline, with an even crappier subplot (Dick and Andy take a kid for ice cream) lands the best laugh of the episode. Nicky (Joshua Harris) is a right little mischievous blister, covering Dick in milkshake and then spinning Andy’s chair so he falls off. Andy’s so unutterably wet we inevitably gravitate towards dastardly Dick in such circumstances, and his pleased response to Andy’s humiliation is priceless (“Uncle Andy went funny boom-boom, didn’t he?”)

Elsewhere, second only to James for excruciatingly uninteresting plotting is Nadine’s high school enchantment, getting the hots for Mike (“He has the cutest buns”), and her trying out for the wrestling team.

The “intrigue” machinations are scarcely much better. Ben, in the grip of listless nostalgia, watches his and Jerry’s home movies and receives a visit from Hank. A little of the old fire returns when he is instructed of Jean’s takeover of One Eyed Jacks and Hank’s move to a new employer (“Don’t patronise me, you goon”) and it’s a well-enough performed scene to wake you up. It just isn’t terribly interesting, ultimately. Ben’s desire to Feng Shui-ing his office is more involving.

Likewise, Josie and Catherine are plain irritating, particularly when I recall the tedium of the “Josie as maid slave” plot that develops from here (as atonement for her misdeeds). The great Dan O’Herlihy arrives as brother Andrew Packard, but doesn’t have much to chew on as yet (I can’t recall at this point if he ever does, but he’s an enjoyable actor to just watch doing his thing, so it isn’t all bad).

Mayor Milford: I used my brain for thinking, not my garden hose.

That just leaves the wedding of Dougie Milford (Tony Jay) to Lana Budding Milford (Robyn Lively), to the objections of his brother Mayor Milford (John Boylan). The latter two appear in more episodes than I remembered, which is probably a good indication of how scintillating their plotlines are. There’s a nice bit with Coop and Audrey dancing at the wedding.

Generally, at this point, the episodes are mediocrities, lacking a sense of focus and staggering around in every which direction. The quirkiness isn’t appealing, and the weirdness hasn’t yet ramped up again. The promise of good stuff to come keeps it ticking over, just about. 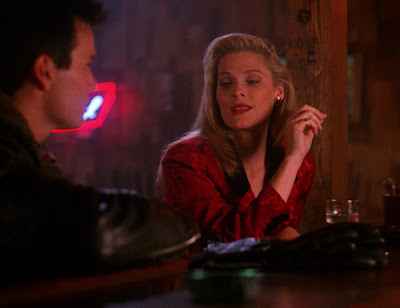 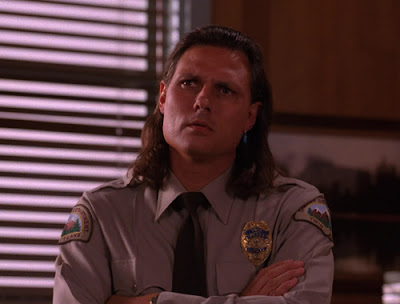 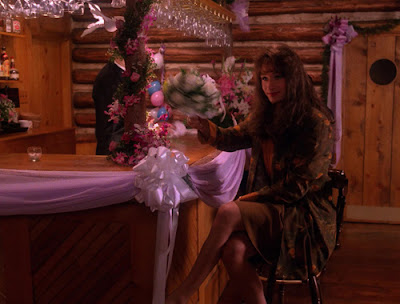 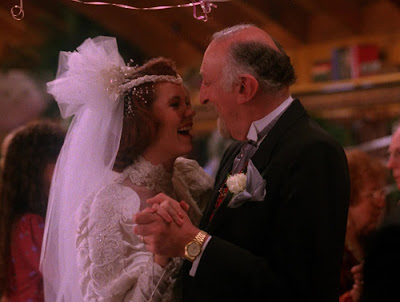 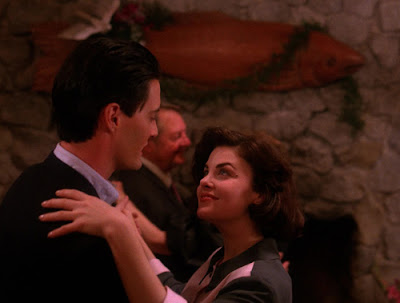 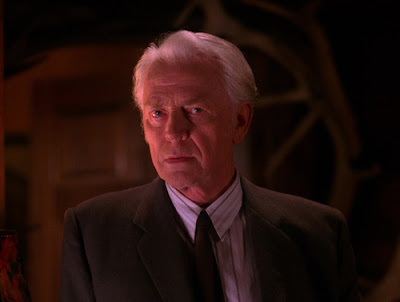