Heaven is a large and interesting place, sir.

Todd Holland, who would mostly go on to comedy work (including The Larry Sanders Show and short-lived Wonderfalls), starts this episode in a highly Lynchian manner, with a macro-shot pulling out of a ceiling tile. It’s a move that promises the unattainable, as rather too much in the way of humdrum plot mechanics will follow.

Four writers are credited on 2.4, suggesting some fairly extensive surgery and overhauling were required to get it in workable shape. As with the previous episode, overly soapy elements arise without a sufficient spin to allow them to operate successfully in Peaks land.

There’s the mistaken identity with Hank and Norma and the travel writer/restaurant critic (he’s actually the D.A.) There’s the return of Josie, whom Harry desperately wants to believe is innocent, the big lug (he also gets down to some hot and steamy dress-tearing rumpo with her).

There’s also the return of Catherine, buried in a ’90s equivalent of yellow face make-up as Mr Tojamura. A character coming back in disguise is as potty as a dead character coming back as a twin sibling. If there was any fun to be had with this plotline it might get a vague pass, but it’s not only dubious in conception, the idea that no one would see through it in about five seconds flat is absurd. Josie’s associate Jonathan (Mak Takano), who has been staring at Coop over a newspaper for several weeks, finally gets to speak and have a fight with Hank, but it wasn’t worth the wait.

Harold Smith is as highly strung as previously, and there’s nothing in his scenes to make them sufferable. Not his desire to create “a sort of living novel” from those he knows, or Donna’s quest to get hold of Laura’s diary.

Lucy: He never exercises, he never washes his car, and he doesn’t even own a sports coat.

Andy and Lucy are provided a series of wank gags, as he is caught with a copy of Flesh World en route to muster up a sperm sample. Later Andy loses the bottle behind a chair in the waiting room. This material is well played, but in the service of a filler subplot.

Richard/Dick features too, of course, offering to pay for Lucy’s abortion. Lucy’s airhead comparison of the qualities of Andy versus Dick is mildly amusing (“He had lot of coats and keeps himself and his car in great shape. Most of his behaviour was asinine but at least he was different”), and Harry commiserates with Coop over failing to help Lucy out (“Well it was a good thought, but it’s like trying to fix those potholes on Highway Nine. First heavy rain and Thwweeettt”).

Jean Renault: I want this man to bring me the ransom.

The introduction of Jean Renault continues to pay dividends, however. He delivers a business proposition to Ben, in which the latter is put on the back foot and has little choice but to agree. This involves Coop delivering Audrey’s ransom. She’s still riding the tiger, and Holland shoots a rather good scene where she witnesses the demise of Emory Battis, on the end of one of Jacques’ bullets. Audrey is high, and Holland makes effective use of point of view. The scene also suggests that, as much Jacques is a ruthless rotter (he’s going to have Audrey killed, after all) he at least possesses a certain villain’s code Emory, who has hit Audrey, lacks.

Codes of honour play a significant role throughout. Coop asks Harry for the services of a Bookhouse Boy for a dangerous mission; of course, as if anyone but Coop couldn’t guess, it’s Harry who shows up.

Leland Palmer: He killed my Laura. Have you ever experienced absolute loss?

In the aftermath of Leland’s arrest, much is concerned with reactions to the murder charge. There are some nice touches, most notably Dr Hayward expressing sympathy for his old friend. He comments sadly that parents should not have to bury their children. Coop rounds on him harshly, having none of it; “Do you approve of murder, Dr Hayward?”

Clinton Sternwood: Just let me just say that when these frail shadows we inhabit now have quit the stage, we’ll meet and raise a glass again together, in Valhalla.
Leland Palmer: Would that it were so.

Ray Wise makes the most of his time in the spotlight, with Leland admitting to murder outright, but explaining how he was compelled to act, because, “deep down, every cell screams”. Judge Clinton Sternwood (Royal Dano) also comes out testifying for Leland, saying he knows him to be a fine, decent man and a capable attorney.

Western legend Dano is a quirky presence, and the judge is treated as a plum guest star part, given interactions with all the main regulars. He doesn’t really blend in as a Peakscharacter, though, more the type you’d find in a straight soap or drama. He does have a suitably irreverent tone, however (“Who do you have to grease to get some coffee round here?”)

Agent Cooper: Heaven is a large and interesting place, sir.

Coop repeats his affection for the town to the judge, comparing Twin Peaks to heaven, despite the “arson, multiple homicides and the attempt on the life of a federal agent”. Harry’s promise “You two should have a lot in common” isn’t really lived up to, however (although there is a line or two in the next episode explaining this).

2.4 also appears to be a bit of a dead end for investigations; Hawk reports that no one called Robertson ever lived next door to the Palmers, and there’s still no sign of Gerrard (although Andy bought a pair of his boots from him). This is a middling episode of Twin Peaks, its sobriety indicative of the direction the show shouldn’t be headed. Perhaps the best that can be said of Laura’s Secret Diary is the latter part is set on an atmospherically stormy night. 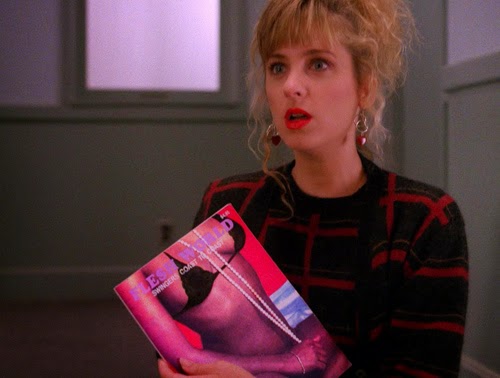 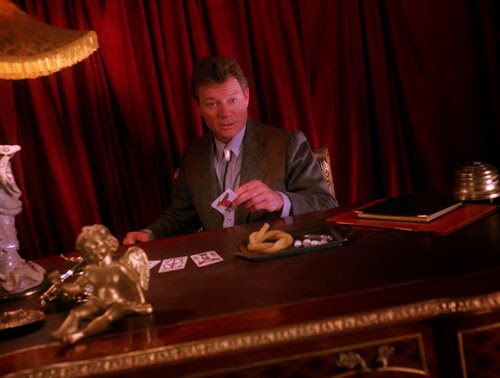 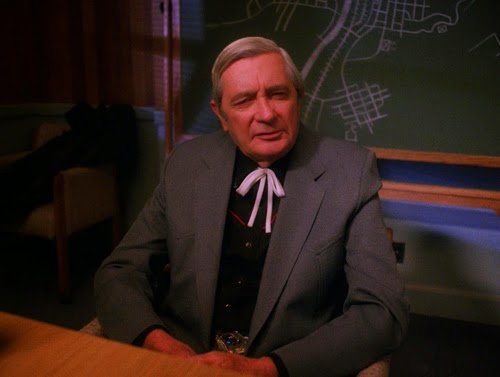 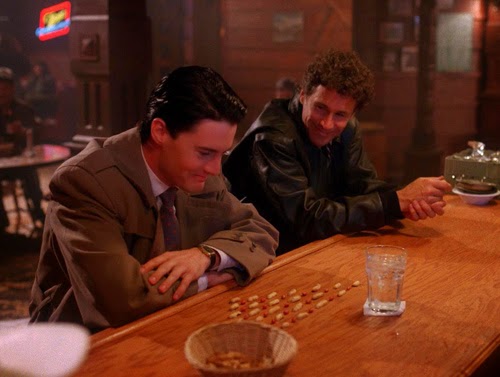 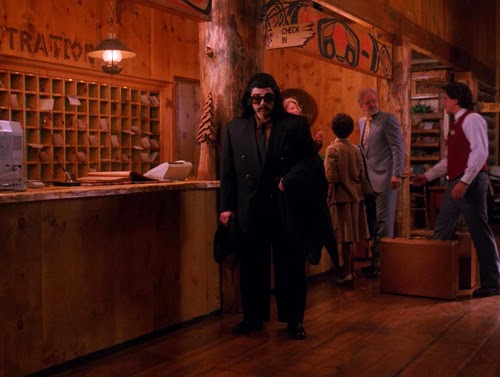