All my optimism was an illusion.

I couldn’t say I’m an avid follower of Woody Allen’s films these days, mostly due the sheer variability of his output. He churns out a picture a year, come rain or shine, so Woody would have to be pretty damn consistent to follow avidly. I’ve found it increasingly takes a lot more to disguise the sound of his voice than it did, and a general air of repetition that has crept in. I guess that’s partly down to him being (almost) eighty and all, but no one is asking him to work so much. Anyone would think he was Clint Eastwood. It’s probably also partly because it’s easier to accept his offerings when he is on screen himself; there’s less chance of mimicry or surrogates. Magic in the Moonlight is a decidedly tepid affair. Its title suggests likeable whimsy, which scored him a big hit recently, but its closer to the rusty period trappings that made Match Point such a risible chore.

That’s a bit unfair, maybe. There’s little Woody has done that’s quite that bad (that I’ve seen anyway; I’ve yet to catch the Ewan McGregor one), but for a director whose approach to dialogue has never been modernistic, it’s curious how jarring his treatment of period can sound (here 1928). It worked in Midnight in Paris as that was a playful, colloquial take on the worship of artistry, and very charming for it. When period is combined with the industry of make-believe (The Purple Rose of Cairo, Bullets Over Broadway) the homages tend to work. Here, during the early stages, where Colin Firth is introduced as irascible stage musician Wei Ling Soo, there’s a similar sense of the broad and heightened that carries amusingly enough.

It’s when Soo’s real persona Stanley Crawford investigates the case of spiritualist Sophie Baker (Emma Stone) that Allen slowly begins to come unstuck. Allen only has one plotline, and it’s at least one too few; non-believer Stanley slowly falling in love with the woman who makes him believe again. The belief/non-belief is a metaphor for finding true love (at one point, a character even says, “Love at first sight is a kind of magic”), but it doesn’t really excuse how thinly filled in Crawford’s status as a Houdini/James Randi-esque (although it appears Allen was inspired by William Ellsworth Robinson) debunker of fake mediums is. It suggests Allen couldn’t be bothered to go to any great effort to underpin his plot.

Despite his arch-scepticism, it takes very little to convince Stanley her fakery is the real deal. Of course, we know, this being Woody Allen, that the plot isn’t suddenly going to about face and indulge the thought that something else might be out there, any more than he’s going to deliver a script with no mention of psychiatry. Both of those come with a caveat; unless he’s beginning to get sentimental or senile in his dotage.

Allen and cinematographer Darius Khondji make the South of France look gorgeous, but that same warmth is lacking in the screenplay. With this title, one might have expected something closer to the frippery of A Midsummer Night’s Sex Comedy. Unfortunately, 100 minutes is too long to have Firth, good as he is, puffing and gruffing away in an uptight acerbic fashion while Stone, who I’m usually a fan of, is not quite at ease, ill-served by the rictus nature of Allen’s characterisations. Unsurprising, as he’s stuck in the same routine as he was forty years ago.  I also wasn’t remotely rooting for Firth and Stone to get together, even though I usually relish a thirty-year age gap in a love story. I didn’t once buy that they had any real affection for each other; there’s certainly no romantic chemistry there.

This needed to be light and frothy, but instead it drags. If Sophie and Stanley had been but one of a trio of mismatched couples finding love, the flaws in the screenplay might have been less evident and the whole might have been significantly more appealing. Supporting players (Marcia Gay Harden, Simon McBurney) are reliable but nothing more than that. Allen’s obsessions are much less endearing when revealed in such an unfiltered fashion. It’s as if he’s running on empty, his formulaic approach relieving him of putting any extra effort into making his scenario credible or his characters likeable. 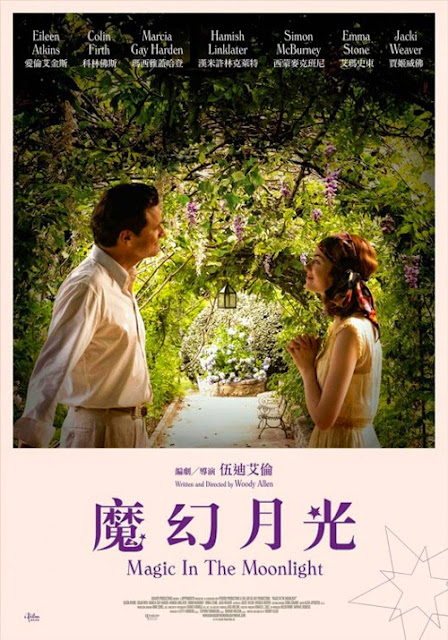