Lynch’s pre-penultimate episode in the director’s chair, penned by Harley Peyton, continues with the high standard set by the opener, and you have to think that’s mostly down to the extra quirk instilled by the show’s co-creator.

On the other hand, there are significant advances in the show’s mythology to help the episode along. Top of the heap is the first mention of Windom Earle, who won’t be seen in the flesh for another nine episodes. But, with the Lynch and Frost under a directive to wrap up the murder of Laura Palmer, they need to be seeding the next plotline as soon as possible. Earle was dispatched to the funny farm for reasons as yet unrevealed (although Cooper believed he had retired), and Coop finds his escape “extremely troubling”; it’s one of the reasons Albert has re-tuned to Twin Peaks, so he clearly sees it as just as worrisome.

Albert: Agent Cooper, I am thrilled to pieces that that Dharma came to King Ho-ho-ho, I really am, but right now I’m trying to focus on the more immediate problems of our own century, right here in Twin Peaks.

If they end on a moment of sobriety with the Earle revelation, the first five minutes of the episode feature Albert at his withering and pithy best. The slightly noticeable consequence is to frontload 2.2 with mirthful goodness, but Lynch ensures that the remainder is at least steeped in the peculiar. Albert and Coop’s breakfast discussion is set to the backing track of a barbershop quartet, as Albert chooses to avoid indulging Coop’s capacity for abstruse thinking (“Has anyone seen Bob on Earth in the last few weeks?” is his response on learning Coop saw the killer in a dream) and interest in the history of Tibet. He also – expectedly – resorts to denigrating the locals who have been questioned over Coop’s shooting. These include “the World’s most decrepit room service waiter” and “the usual bumper crop of rural know-nothings and drunken fly fishermen”.

Albert: Let’s see, beer cans, a Maryland licence plate, half a bicycle tyre, a goat, and a small wooden puppet. Goes by the name of Pinocchio.
Agent Cooper: You’re making a joke.
Albert: I like to think of myself as one of the happy generations.

Then there’s the marvellously deadpan summation of Jacques Renault’s stomach contents (above). There’s a further Albert appearance in the next episode and then we have to wait another five for more pearls of sarcasm.

Major Briggs: Any bureaucracy that functions in secret inevitably lends itself to corruption matter of fact logical mind.

Major Briggs delivers the second most vital element of the episode, in terms of what is to come. I’d entirely forgotten that he’s (at this point at least) such a great character in the series. Indeed, I probably think of Don S Davis more as Scully’s dad than for this. Briggs’ presence here ties appropriately into all things X-Files, what with its talk of deep space monitors aimed at galaxies beyond our own (suggestive of the first season episode Conduit). We learn that, at the same time Coop was shot, the message “THE OWLS ARE NOT WHAT THEY SEEM” appeared amid rows of gibberish, followed by “COOPER” repeated several times. This occult strain is very different to The X-Files ET soup, however. Anyone would think Lynch, Frost and Peyton had been watching Children of the Stones, what with with the link between primal forces and messages from the stars.

The Log Lady: You have shiny objects on your chest. Are you proud?
Major Briggs: No, achievement is its own reward. Pride obscures it.

Briggs’ straight talking is very funny, from his logical breakdown of why the government should not be trusted, to his failure to rise to the Log Lady’s impugning of his medals. Margaret is called out for last episode’s spitting of pitch gum, but the best part of the scene is how Briggs completely doesn’t treat her like a loony; indeed, he is very much open to her non-local advice (requesting him to deliver the message and asking if he understands, he replies “Yes ma’am, as a matter of fact I do”).

All this is rather unexpected and cosmic, suggesting that the goings on in Twin Peaks are connected to the wider universe (and, with owls not only masonically entwined but also a feature of ET cases, it makes for a cryptic little tease).

With regard to those owls, Lynch also references them in a montage dream sequence at the episode’s conclusion, in which Coop sees the giant, Ronette, Sarah Palmer, and both a blurry-faced Bob becoming clear and then one with the design of an owl superimposed on his face.

Lynch keeps the on-going Laura mystery effectively off-balance throughout. He confounds expectations by turning the interview with the awoken Ronette (very soapy to have one character wake from a coma just as another to goes into one) in a piece of physical farce as Coop and Harry attempt to adjust the unhelpful hospital stools to an appropriate height. When she sees the artist’s rendition of Leo she doesn’t react, but Bob is unsurprisingly convulsive.

Leland Palmer: My grandfather’s house on Pearl Lakes. He lived right next door. I was just a little boy, but I know him.

Others are also responding to Bob. Leland, who has caused further problems for Ben and Jerry by talking to business partners about the fire at the mill, recalls how he met Bob when as a boy; again, this is setting up the reveal of Laura’s murderer, towards the end of the first half of the season.

The other identifier is poor Maddy, living in the same house as a murderer. First it was besmirched carpets, now it’s the unnerving sight of Bob descending into the living room and stalking towards her. I’ve said that Bob isn’t nearly as scary outside of a shot lasting more than a couple of seconds, but this sequence is outstanding. The manner in which Lynch simply, almost casually, allows him to intrude upon the living room is unnerving.

And how great is Sheryl Lee? Very, transitioning her from innocent girl smitten with crooning doofus James (goodness knows why), to abject sadness when Donna and James embrace, to abject terror at the arrival of Bob.

This whole scene is bizarrely brilliant, but should be absolutely awful. James croons a love song like he’s on electro-helium, but set as it is to that slightly haunting Badalementi rhythm, it becomes hypnotic. Lynch just lets it play out, drinking in the various realisations between the ménage-a-trois; James responding to Maddy, who is making eyes at him, and Donna taking charge when she thinks her boy’s straying from the fold.

I don’t think there’s a scene here that doesn’t have some kind off Lynch craziness, but the one that most looks like he made it up on the spot is Donna’s meals-on-wheels visit to Mrs Tremond (Frances Bay, best known as the victim of Jerry’s bread-snatching in the Seinfeld episode The Rye; “Gimme the bread, you old bag”).

Lynch’s son Austin Jack Lynch plays the lady’s grandson, made up as a miniature of his dad and keen student of magic, such that he enables cream corn to vanish from his gran’s plate (“Sometimes things can happen just like this”). There’s also (obviously, Lynch is obsessed with food) a shout out to last week’s hospital food nightmare (“They used to bring me hospital food. Imagine that”) and junior’s endorsement of Donna (“She seemed like a very nice girl”). Fortunately, we don’t have to suffer Mr Smith yet, but he’s imminent.

Jerry Horne: Is this real, Ben, or some strange and twisted dream?

Also offbeat, but just about keeping the plot moving, are Ben and Jelly debating whether to burn Catherine’s fake or accurate ledgers (“It looks like we’re 100 percent certain that we’re not sure”), but not Jerry’s smoked cheese pig. Then there’s Andy covered in tape attempting to put up Bob pictures and his (yawn) suspicion of Lucy being up to no good because he’s sterile (“Sure, I thought it meant I didn’t have to take a bath”), Bobby and Shelly discussing nursing Leo in order to take home the insurance money (“You could stick him in a corner and hang donuts from his ears”) and the deer’s head in Harry’s office with a “The Buck Stopped Here” sign below it (“You know, that’s an awfully cute buck, Harry”). The reveal in the same scene that Hank used to be a Bookhouse Boy takes some swallowing, however.

Agent Cooper: Audrey’s absence touches me in ways I could not predict. I find myself thinking not clues or of evidence but of the content of her smile.

We finally get back round to focusing on Audrey, but by this point it feels like the writers have run out of ideas for her, particularly with the hindsight that Coop mooning over her will come to nothing.

There’s an amusingly composed scene of fetishism with Emory Battis is blindfolded and tied up, his painted toenails drying, while a lovely does the hoovering around him (“I’m Audrey Horne and I get what I want”), but if the sum total of Audrey’s investigations is what she knew already (Laura worked there) it’s not exactly a dynamite plot thread. Likewise, the cliffhanger, another where she is in trouble at One Eyed Jacks, is treading familiar water.

This is relatively minor complaining though. Twin Peaks starts off its second season at least as effectively as it does its first, and shows no inclination to run out of steam just yet. It’s also evidence that the Lynch touch will be sorely missed if he isn’t going to be directing the new series, already written or otherwise. Just that Lynch factor on set brings about alchemy. 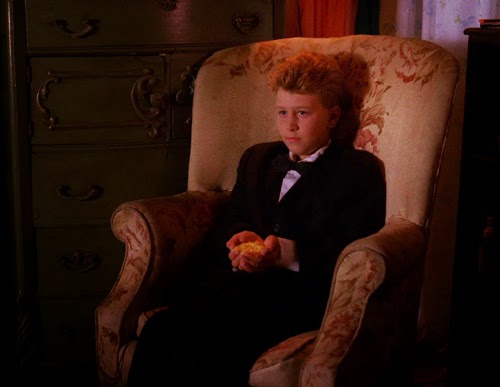 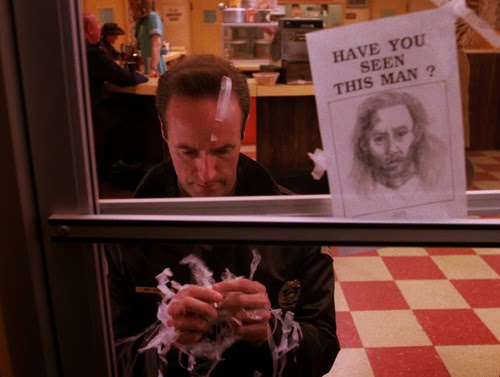 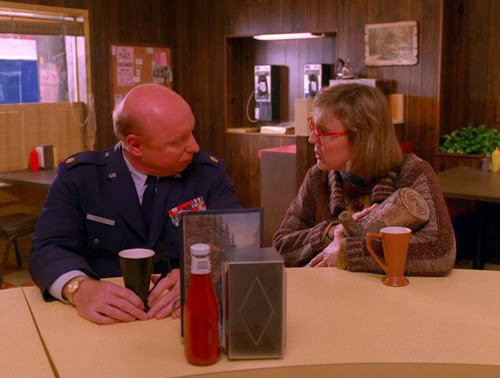 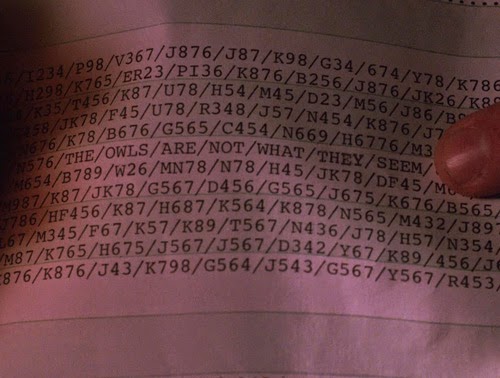 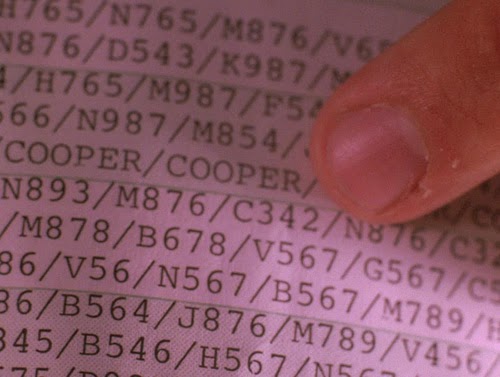 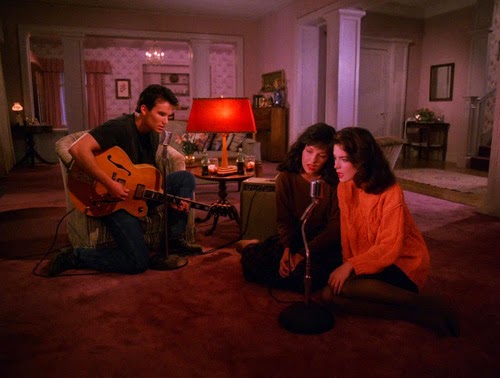