Oh, save the whales and not the universe, huh?

The post-Star Wars landscape is littered with knock-offs, movies and TV shows that achieved varying degrees of success, originality and critical recognition, but there were surprisingly few that slotted precisely into the laser-zap, space battles template. Battlestar Galactica and Buck Rogers in the 25th Century were the most blatant examples, and then there was Roger Corman’s inevitable cash-in Battle Beyond the Stars. The Last Starfighter was a little different. It arrived after Lucas trilogy finished and was informed as much by the burgeoning computer and video game industries (see also War Games) as science fiction movies. It now stands as a half-forgotten curiosity, likeable but innocuous, and more likely to be referenced as a footnote in the development of CGI than discussed for its merits.

Which is quite fair, really. I recall reading the Alan Dean Foster novelisation and the Marvel comic strip adaptation, both of which led to anticipation the actual movie couldn’t live up to (and a great poster as well). It wasn’t bad, but it lacked the anticipated verve and flair. Writer-director Nick Castle started out working with John Carpenter (he was a camera assistant on Dark Star, played Michael Myers in Halloween, and co-wrote Escape from New York with the director), and The Last Starfighter has something of the unpolished charm of many of Carpenter’s movies. Its parts don’t quite come together into a greater whole, despite an irresistible premise.

Jonathan R Betuel provided the screenplay (his dubious other credits include My Science Project and Theodore Rex) and it’s been suggested he’s the main impediment to a remake happening. It’s easy to see why someone would want to reboot a picture that was only ever a moderate success (it was just outside the Top Thirty films in the US in 1984, nudged aside by Carpenter’s Starman), and its unfulfilled potential makes it one of the better candidates from a now increasingly plundered decade.

Alex Rogan (Lance Guest) lives in a trailer park with his mum and brother Louis. He nurses dreams of escaping to a better life with girlfriend Maggie (Catherine Mary Stewart). As luck would have it, it just so happens that the arcade game he devotes his spare time to, and achieves top score in, is a recruitment tool for joining “the Star League to defend the frontier against Xur and the Ko-Dan armada” (to be fair, the game is straight up about its intentions, more fool Alex).

This is all very much your standard hero’s journey stuff, with dutiful Alex wanting to go off on an adventure (like Luke Skywalker) and initiated in his quest by a wise older man/alien (Robert Preston’s Centauri, a roguish variant on Ben Kenobi). The picture is relaxed enough to name its sources though (“Up to your old Excalibur tricks again, ay Centauri?”) and includes the standard trope of Earth not being mature enough to be invited to join the space race. Alex isn’t as impetuous as Luke, though; he initially blanches at his calling, which leads to some slightly awkward plotting as Centauri brings him all the way back to Earth only to take him to re-join the fight to save Rylos.

Other aspects are similarly rough and ready. There’s potential with the discontent in the ranks of the Ko-Dan, who have to contend with Rylan traitor Xur (Norman Snow) bossing them about, but it’s fairly bare bones. This might have worked better if Castle had embraced the self-parodic aspects more fully (as Carpenter did a couple of years later in Big Trouble in Little China), as the depicted galaxy is of rudimentary white hat-black hat variety with little colour (Xur’s dad is the even leader of Rylos). It might also have made some of the cheesier aspects easier to swallow (the entire park gathering round to cheer Alex to victory at an arcade game; aliens using C4 as a means of sabotage; the armada being not really all that substantial at all, and the big wide galaxy depicted via CGI and approximately three sets).

With regard to Craig Sarafan’s score, I know it gets many accolades but I have to admit it doesn’t really do much for me, shooting off in about ten different directions of stirring bombast, none of them really thrilling.

Ironically, the major selling point, the space battles, is the least engaging aspect. We’ve all seen space dog fights by this point, and they need to do something pretty special if they’re going to wow. Castle et al are at least to be credited with devising a distinctive approach. Rather than using physical models, the majority effects work comes via the now par for the course use of CGI for the space ships and battle sequences. Their rudimentary nature is now very evident, although I don’t know that they’re hugely inferior to what Babylon 5 was doing a decade later.

The designs of the craft are least blessed by having Ron Cobb on board (the gunstars are great). Set against a space backdrop, the effects just about get by. Inside an asteroid (a nod to The Empire Strikes Back?), not so much. It means there’s never much suspension of disbelief between CGI exteriors and the gunstar interiors, but Castle tries his best to create the illusion of movement with rotating cockpits.

If the space ships are so-so, the alien designs are the best you’ll see this side of Star Wars (the electronically augmented voices and sound effects are top notch too). True, the Rylans are rather sub-Lobot looking but, if the movie is never in danger of looking expensive (despite a decent budget), the creature work is suitably imaginative.

There are the Ko-Dan, particularly Lord Kril (Dan Mason) with his groovy red eye visor (his response to a minion, who asks “What do we do?” When their ship is pulled into the gravitation of Rylos’ moon, is the commendable stoic “We die”). There’s the contingent of Starfighters, sadly only featured in a couple of scenes, which include a Cthulu-squid like mofo in a spacesuit. Then there are the memorably ugly Admiral Ackbar-meets-a-piranha fish Zando-Zan assassins. There’s a good showing for alien grue too, something one could rely on in the early ’80s; arms get shot off, faces melt, and the Beta-U forms under a sheet in a scene riffing on Invasion of the Body Snatchers.

And it’s Beta-U who features in the picture’s most effective moments. Ironically, the best material derives from the earth-bound culture clash of Alex’s robot double attempting to sustain a relationship with Maggie. Particularly so, since a number of these scenes were added after the character received positive feedback from test screenings. (Test screening also lead to the obviously dead Centauri being miraculously brought back from the grave; more front-ended in terms of calculation is having Zur survive for a never-to-be sequel.) Beta Alex’s treading of the treacherous minefield of sexual politics leads to a number of well-observed scenes (in particular, his attempts to sweet-talk Maggie through appropriating the eavesdropped conversation of another couple).

Maybe it’s not a coincidence that these scenes work better; they’re certainly more in tune with the prevailing trend in movies of the period; a gradual move away from fully-rendered galaxies and towards identifiable (teen) everymen with a sci-fi/fantasy twist (Gremlins, Back to the Future – which would also feature a flying car that is remarkably similar to Centauri’s here; Alex Cox was barking up the wrong tree when he suggested Repo Man inspired Bob Zemeckis). And with Louis (Chris Herbert) there are also the junior protagonist/sidekicks, often loud/obnoxious/vulgar (The Goonies).

The most surprising aspect revisiting The Last Starfighter is realising just how good Guest is. He has great comic timing, and differentiates his two roles with deceptive ease. He makes an easy-going, affable lead, so a subsequent career of TV supporting roles seems a bit unfair (he had previously appeared in Halloween II, and would go on to play Brody’s son in Jaws: The Revenge, which he would probably rather forget).

He’s ably supported by a scene-stealing Dan O’Herlihy, who I’d never have taken for the type willing to conceal himself under prosthetics. Grig’s a likeably upbeat alien (his family album’s a wonderfully silly touch) and O’Herlihy is clearly having a good time, adorning him with a Herman Munster asthma laugh and indulging his warrior bluster (“It’ll be a slaughter!” pleads Alex, “That’s the spirit!” misunderstands Grig). A not dissimilar reptilian design, but more honed, would furnish Lou Gosset Jr’s alien in the following year’s Enemy Mine. Preston is wonderfully wily as Centauri, while Catherine Mary Stewart, who had a minor cult following due to this and Night of the Comet, is game.

The picture occasionally gets a little meta-, and it’s the better for it. The arcade machine device is incorporated with a knowing wink (“Do you know how long it took to invent the games, to merchandise them, to get them into the stores for Christmas?” asks Centauri). They were “supposed to be delivered to Vegas”, rather than a trailer park.

The desire to differentiate the movie from Spielberg’s suburban tales may explain why the park itself comes over as some kind of idealised hippy commune, rather than the less salubrious reality. Such attempts to avoid imitation are hit-and-miss; the picture occasionally subverts clichés (granny with a shotgun) but is more often in thrall to them (Vernon Washington plays Otis, the park’s very own “Magical Negro” who imparts Alex with the wisdom that “Things change. They always do”).

Nevertheless, there’s enough here to pick out a subtext or two, intentional or otherwise. The trailer park represents the poor underbelly of Reaganite America. For Alex to escape from economic hardship (he is denied a loan, notably), he is required to leave his country all together (going all the way to another planet). Alternatively, one might argue his salvation comes from joining the military; is this a precursor to Top Gun? Now, the same idea has an alarming edge to it, since gamers are recruited as drone pilots. And what fate Maggie, destined to be a bored starfighter’s wife? Perhaps she should have stayed with granny.

The Last Starfighter is pleasant, but slight. It isn’t too surprising its reputation hasn’t grown in the thirty years since its release, even if the nostalgia for it is entirely understandable. Conversely, It’s unsurprising that its premise is extolled (quite similar to that of Ender’s Game, which it preceded by a year). It would be easy to see a remake eclipsing the original (unlike, say, the same summer’s Gremlins, which is doomed to a forgettable update). 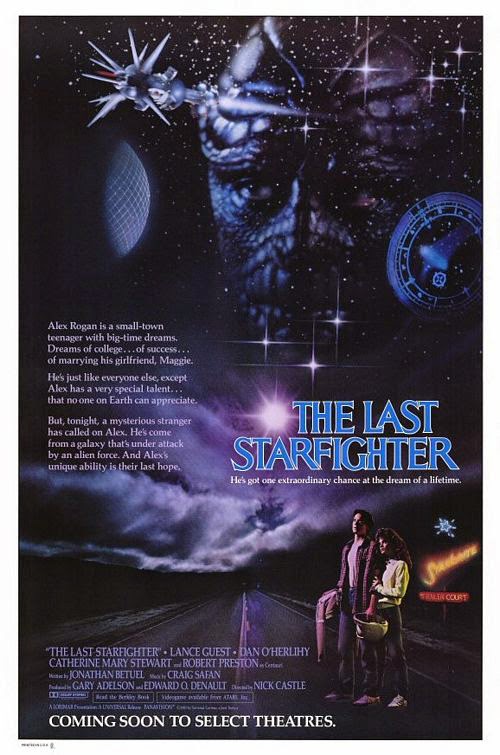