Is that the best you can do, you pansies?

Sin City is generally seen as one of the more faithful and estimable comic book adaptations. It certainly has its fans, although evidently not as many as Robert Rodriguez and Frank Miller thought, since last year’s sequel went belly-up. Perhaps that was down to the nine-year gap between the original and its prequel/sequel (clearly a thing for Miller cash-grab narratives, although one would hardly label his writing tricky), or perhaps it’s a case of the emperor’s new clothes. Sin City gets labelled neo-noir, but that carries with the implication of a development beyond film noir in some shape or form. Rodriguez and Miller take the iconography of noir, but their only “advancement” is lashings of sex and violence (and a touch of fantasy hyperbole). Their movie revels in mining new depths of sadism from the genre in a similar fashion to Dead Men Don’t Wear Plaid’s sourcing it for comedy yuks.

Sin City didn’t particularly impress me when I saw it at the cinema a decade ago; the stylistic conceit wore off quickly, not that it was much of a wow to begin with. All that remained after that was Miller’s unpleasant leering. I had a not dissimilar similar response to the also heavily stylised 300, but in Sin City’s case the hollow storytelling and ingrained lack of engagement added to the overall disenchantment. If 300’s filmmaking complements the movie (whether you like that movie or not), it would be difficult to contest that approach to Sin City facilitates immersion in the tales being told. Yes, it authentically replicates the pages of the comic book, but is that a good thing, as a piece of cinema? A blended approach can work (Ang Lee’s underrated Hulk), but here there’s nothing behind the green screen. The comic book may be a page-turner, but the movie is locked into the static spectacle dictated by its directors. One can behold it, but it there is no involvement.

Miller presumes, I presume, that Sin City’s title gives him carte blanche to depict a catalogue of sadism and grotesquery on screen. During the course of the movie, we’re witness to a litany of dismemberment, misogyny, homophobia, and rape, all in the name of titillation. To make the bad medicine go down, he and Rodriguez whip up a fascistic veneer, one that might be viewed as overstatement or self-mockery if the picture wasn’t so humourless.

In addition, the characters and stories are relentlessly one-note. Miller’s women are all victims or whores (with a transparent attempt to mollify this by including some kick-ass hooker bitches). Two of the plotlines rely on man-child monsters for motivation, edifyingly distinguished from each other by one preying on children and the other women). In both cases, the establishment (church, state, the police) protects the perpetrators. Maybe its rudimentary palate is the point, but if so it didn’t need two hours to get it across.

The effect of this is antithetical to expectations. With the wall-to-wall talent (and Josh Hartnett, and Jessica Alba) the last thing one would expect is scenes playing out like an amateur theatre production, but they do. Bruce Willis is perfect for pulp fiction (ahem), but the only aspect of his performance that registers is the rate post-2000 sight of a rug adorning his shiny pate.

Mickey Rourke is as impressive and memorable in his own way as Ron Perlman in Hellboy, but Marv is a much more appealing character in the sequel. Powers Boothe is appropriately despicable. Benicio Del Toro conducts an experiment in being subsumed by prosthetics and accent, but it relies on its effect by knowing it’s Del Toro playing. Nick Stahl is a ridiculous boogieman (the Yellow Bastard) while Elijah Wood plays against type as a silent cannibal (since then he’s attempted to show the dark side of Elijah a few times, to tepid results).

One assumes Rodriguez cast Alba because he has the hots for her. Either that or he appreciated the irony of a stripper who doesn’t strip in a movie where pretty much every other female character appears in some state of disrobement or peripheral attire (one might consider Rodriguez entire career to be ironic, but I think that would be giving him too much credit). Nancy is a significantly sized role, but she’s part of an already weak story before Alba steps into it, which consists of Nick Stahl being loathsomely mustard-coloured and Bruce’s voice over (as Hartigan) fretting and obsessing over her. What is one to make of Miller’s Lolita plot device, in which Hartigan must brave out the attentions of the now-legal girl he saved? Nothing edifying, that’s for sure.

Others fare better. Rosario Dawson is opposite Clive Owen in The Big Fat Kill and is little more than another girls-with-guns number. Ironically, when Sin City does work, it’s usually down to scenes plays out more classically, rather defeating the point of the exercise. Carla Gugino’s breasts are lovingly purveyed, but it’s all downhill for her from there. She’s a lesbian so she has to die, and Rodriguez also gives us a taste of his female amputee fantasies (see also Planet Terror).

Does any of the stylisation work? Well, the luminous blood is quite effective, but much of the emboldening merely reproduces comic colour flashes or exaggerated action (car chases, leaping great distances) in a manner that doesn’t thrill when put into physical motion. I guess the one upside of this is that Rodriguez approach appears less slapdash and “that’ll do” than usual; it’s supposed to look fake and unreal!

Occasionally, there’s a moment that hones in one what the movie might have been. Stuka is shot through the chest with an arrow but continues to interact with his associates through the rest of the scene; it’s a rate moment of humour clicking (Del Toro’s post-death digressions fail in this regard).

In the years since, few have attempted a full-blown repeat of Sin City’s visual flourish. The Spirit, Miller’s solo directorial outing, mimicked the approach to public indifference and general derision. Now, A Dame to Kill For has tanked. It seems like a late but fitting verdict on a pungent brew of degradation, one arrogant enough to think it could get a free pass appears on blunt stylisation and weak homage alone. 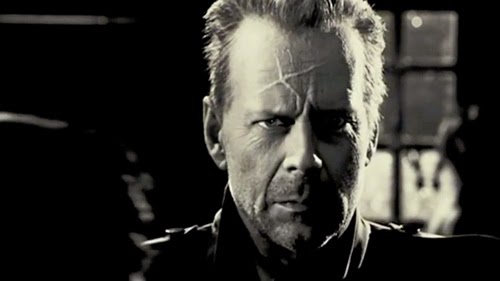 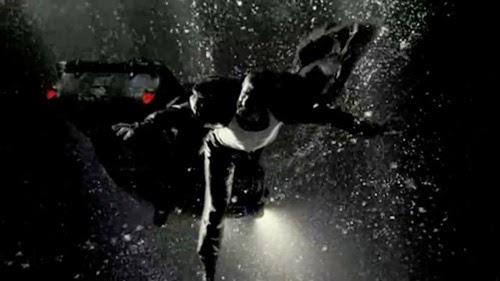 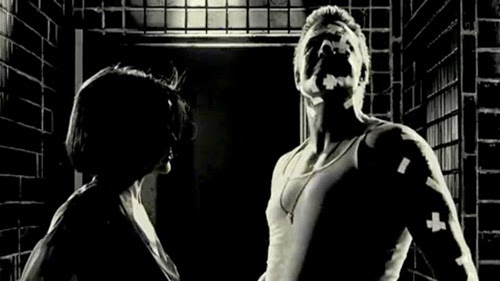 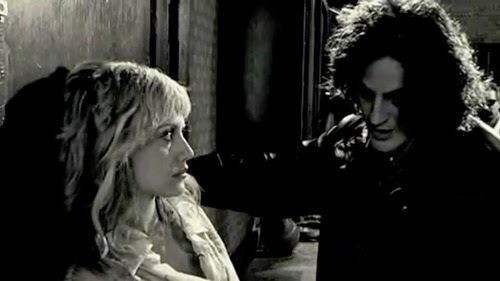 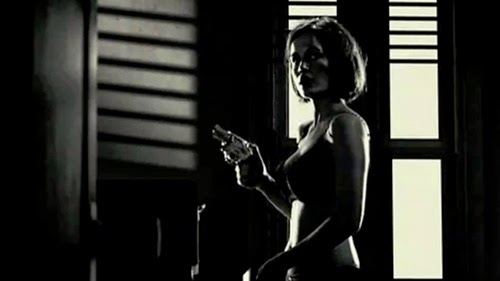 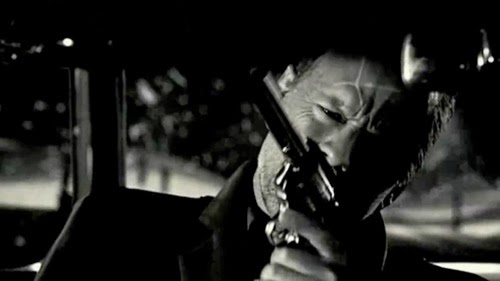 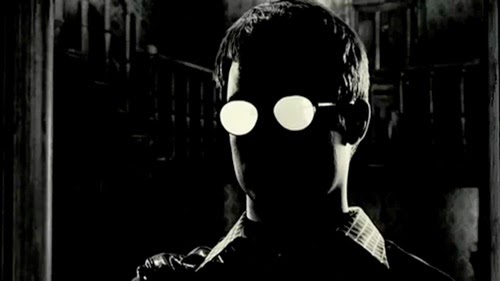 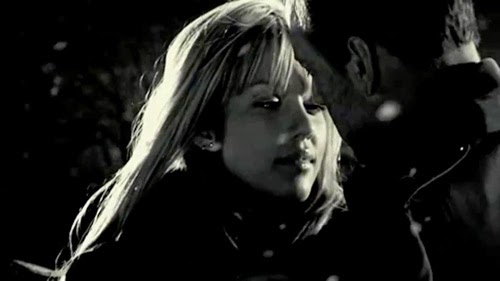 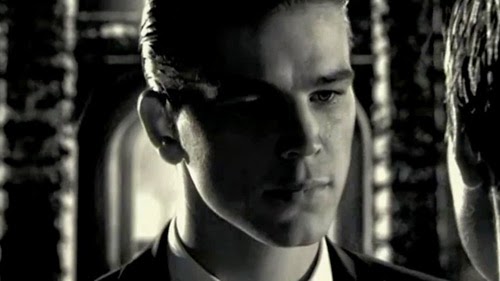 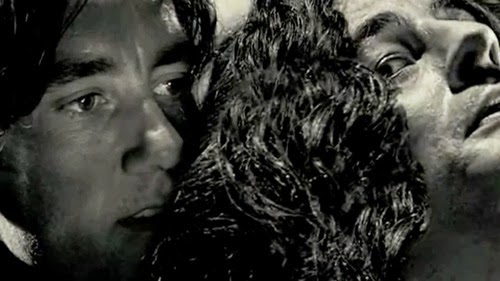 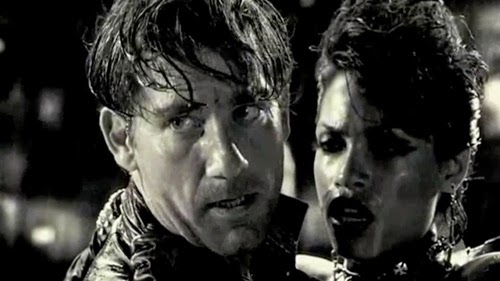 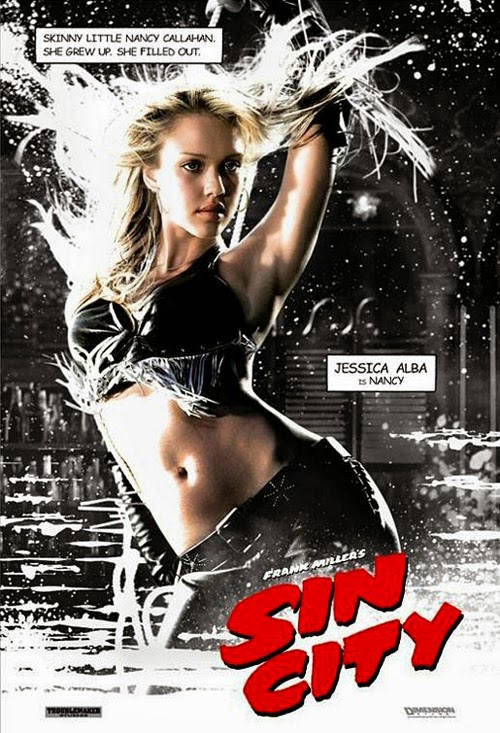