I hold neither a symbol nor a gun. My hands are empty. Which of you will take them?

The Next Man
aka The Arab Conspiracy aka Double Hit
(1976)

In which Sean Connery plays an Arab. For the second time. His versatility when confronted by the challenge of portraying different nationalities and ethnicities is renowned, of course. Russians (The Hunt for Red October), Irish (The Untouchables), Greeks (Time Bandits), even Japanese (You Only Live Twice); they’re no problem for one of Sean’s calibre, all arriving fully bestowed with a recognisable Scottish burr. For some reason, this rarely matters (well, You Only Live Twice features an egregiously ridiculous makeover); Connery forces the world to reform around him by sheer dint of presence. So the role of Khalil Abdul-Muhsen, Saudi Arabian Minister of State determined to broker Middle Eastern peace elicits a nod of “Yeah, okay, I’ll go with that”. The rest of The Next Man (also known as The Arab Conspiracy and Double Hit) isn’t nearly so easy to give a free pass to, however.

Perhaps it was the success of the previous years The Wind in the Lion, where Connery played a Berber brigand (who wouldn’t want to be able to say they played a Berber brigand?), which attracted the Scot to the character (most infamously, Connery would later play an Egyptian posing as a Spaniard in Highlander). Or perhaps it was the lure of shooting in the Bahamas (which the actor would call home from the 1990s onwards). Or it could simply have been his occasionally political bent (which in the real world has seen him call, albeit remotely, for Scottish independence). The same awareness that found him make satire Wrong is Right and stumbling eco-thriller Medicine Man. If the latter, it’s a particular shame, as The Next Man is a half-baked concoction from the screenplay (credited to four writers) through to the direction from Richard C Sarafian (one of those co-writers, whose finest moment came with counter-culture road movie Vanishing Point and lowest with an Alan Smithee pseudonym for Solar Crisis).

There’s a kernel of a good idea at the front end of the picture, whereby an unnamed shadowy group is outraged that “a faction within the Arab organisation of oil producing states has entered into a conspiracy” to create “a production consortium competitive to our own”. Everything about this group is sketchy – full disclosure: I didn’t see the 108-minute version of the movie, so I may have missed vital plot details or scenes that transform it into a neglected classic, or at least clarify matters – but I would presume this is a means of saying that they represent an Illuminati-type organisation that somehow holds sway over OPEC (Khalil refers to OPEC as a now-confused voice that engineers dark deals and supports terrorist activities). At least, one wonders that this group isn’t attempting to bring it down too.

In the spirit of any conspiratorial group out to quash a conspiracy, they “take steps to neutralise this plan”, which entails an opening fifteen minutes devoted to offing the three ringleaders, from Kuwait, Saudi Arabia and Tunisia. This could have taken three minutes and serves to establish the picture’s high fat content, rather than providing nutritious, intrigue or commentary. One of these, Al Sharif, is played by Connery’s co-star from Thunderball, Adolfo Celi.

Cue the entrance of Connery, “a tiger with soft brown eyes” and bearing a comb over rather than the full rug. Khalil was educated in the US (and Shcotland) and, as with his slain friends, appears to enjoy something of a playboy, carousing lifestyle when he’s not giving speeches to the UN.

It’s a bit of a mystery that Khalil appears to have been given carte blanche to introduce is his outrageous plan for a united Arab world, opposing the “immutable forces bent on dragging the world into holocaust”. He calls for a new contract that may replace OPEC, and the opening of a dialogue with Israel to create a Palestinian state. And he wants to look into new sources of energy (a nod to the notional suppression innovations in alternative energy by the capitalist system?) Later he appears to have a rethink when, back before the UN, he proposes that Israel joins OPEC as a non-producing member and equal partner. He wishes to be free of “the destructive political and economic influences which have been exerted upon us by the East and the West”, that have strangled them for centuries. To cap it all he defies those who would keep the Arabs and Israelis enemies.

Khalil apparently runs with the idea that Israel and the Arab states are unwittingly pitted against each other buy the mysterious puppeteers we have seen at the outset, which seems to ignore western allegiances to the Jewish state and supplication to Saudi interests (the Saudi government apparently complained about the movie to producer Martin Bregman). There are some decent ideas in The Next Man, but they seem rather confused; it’s unwillingness to show clear antagonists looks like a cop out, while simultaneously presenting a main character with a plan that sounds like science fiction. We see much in the way of protests outside embassies; at one point, brave Khalil gets out of his limo and persuades a demonstrator “Trust me, it takes time” with regard to the quest for a Palestinian state. But such topicality is off-kilter when balanced against his naïve plan.

It’s been said the picture is prescient, of the Egypt-Arab Peace Treaty that came from the Camp David accords and the assassination of Anwar Sadat that followed, but I think that gives The Next Man too much credit. It’s simply a picture born of a period when conspiracy features were a popular dish; hitting some vague marks is more luck than insight.

The big problem, however, is that this is a conspiracy movie with next to no intrigue and zero suspense. We have the cabal conferring in the opening scene, but beyond that everyone knows Khalil is putting his head in a noose (“I give him a month”; “A week” counters a fellow journalist). The picture then crawls from scene to scene as Khalil canoodles with ice queen assassin Nicole (Cornelia Sharpe). Sean displays his facility with polo necks, and professes to be a stranger in a stranger land, but having been Bond he still knows “where they serve an excellent Martini”. There’s an assassination attempt where Connery can exercise a few macho muscles, but it isn’t especially involving.

Sharpe is okay, but too cool in a sub-Dunaway manner for there to be any chemistry with her co-star. And yet, the only scenes that actually leap out involve her. We see her casually showering while leaving the drugged Celli to suffocate within a plastic bag. She then emerges, removes it, and tidies up. The ending, too late, is also pretty good. We discover that Hamid (Khalil’s right-hand man, played by Ecuadorian actor Albert Paulson) is also conspiring against his friend when he instructs Nicole to finish the job; she shoots Hamid and then Khalil (off camera), uttering “Soft brown eyes” as she does so (the title refers to Nicole’s next hit job, but is also suggestive that there’ll always be someone to take Khalil’s place just as he took the place of someone before him).

Is Hamid working for the shadowy group? Possibly not: he may be a dupe, believing Khalil’s demise is good for his country. It’s all very murky. There’s a neatly efficient line in tying up loose ends also; the earlier assassins are dispensed with, and someone is clearly going to do the same to her after the closing credits.

If this kind of clinical Day of the Jackal approach is in the picture’s favour, it’s about all that is aside from Connery’s presence. There’s a notable brief appearance from Lance Henriksen (as Hendrickson), even smaller than his turn in the previous year’s Dog Day Afternoon. This was also Michael Kamen’s first feature credit as composer. The Next Man, like several other ‘70s Connery pictures, is bereft of the essentials in the script and direction departments. Perhaps Bregman persuaded Connery, coming off Serpico and Dog Day Afternoon and (according to Pauline Kael) looking for a star vehicle for protégée Sharp, that this was a meaningful, substantial affair. If so, Sean was sold a pup. 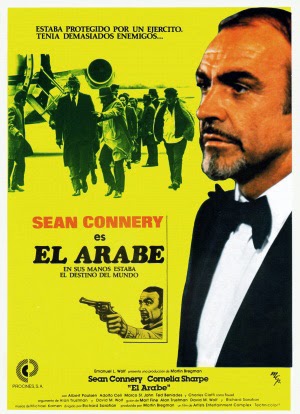