When two separate events occur simultaneously pertaining to the same object of inquiry we must always pay strict attention.

With the waves left in Albert’s wake subsiding (Gordon Cole, like Albert, is first encountered on the phone, and Coop apologises to Truman over the trouble the insulting forensics expert has caused; “Harry, the last thing I want you to worry about while I’m here is some city slicker I brought into your town relieving himself upstream”), the series steps down a register for the first time. This is a less essential episode than those previously, concentrating on establishing on-going character and plot interactions at the expense of the strange and unusual. As such, it sets the tone for the rest of this short first season.

The first of ten episodes penned by Robert Engels (who would co-script Fire Walk with Me with Lynch, and then reunite with him for On the Air), this also sees the first “star” director on the show in the form of Tim Hunter. Hunter is a director (like Michael Lehman) who hit the ground running but whose subsequent career has rather disappointed. River’s Edge, a twisted teenage murder yarn that announced Kean Reeves’ career and contributed, with Blue Velvet, to the second coming of Dennis Hopper, may well have attracted Lynch’s attention due to the latter’s crazed turn with a blow-up doll. Or it could just have been recognition of kinship with the atmosphere of queasy unease and decay in a small-town setting.

Since then, Hunter has made a go of it as (mostly) a TV gun for hire, marking out territory in projects such as Eerie, Indiana, Carnivale, Mad Men and Hannibal. One might see him as leading the charge (or disenchantment) of directors turning to TV. Even before his Twin Peaks gigs, he was calling the shots on episodes of Falcon Crest and Beverly Hills 90210.  He takes to Twin Peaks like a duck to water.

Mark Frost appears to be keeping his eye mostly on teasing out enough plot ammunition to ensure the series keeps up a head of steam, which is why – encounters with llamas and intuitive discourses aside – this episode goes light on the peculiar. Mostly, we encounter further elaborations on characters’ involvement in no-good activities.

There’s Benjamin Horne, whom we knew was plotting the demise of the mill but didn’t realise he was entangled with Leo Johnson (he shows up while Leo is burying Bernard). He’s clearly capable of – at least – ordering unspeakable acts. This positions him even more as a suspect, since he had the means to procure Laura and Ronette (employing them at his department store perfume counter) and ready access to the drugs smuggled by Leo and Jacques. On the lighter side, he laughs at a joke for which we’ll have to wait another week to hear the punchline (“No, I don’t know what you get when you cross a Norwegian and a Swede”).

More of a surprise is the reveal that pouting princess Josie is also in with the villains. The extent of this will be made clear next episode, but for now it’s enough to find out that newly released Hank is known to her. Hunter goes nuts with this (the final scene in the episode), shooting Josie from alarming Dutch angles as she reads his letter.

Chris Mulkey has made a career out of a rather untrustworthy face, but Hank, with his attempts to get back into Norma’s good books and role as heavy for hire, isn’t the most interesting of roles.

In contrast, Russ Tamblyn continues to steal scenes as Dr Jacoby. With his two-tone tinted glasses and sleight of hand with golf balls, Tamblyn is constantly interesting to watch. He gets a meaty scene with Cooper, in which the FBI man unsuccessfully fishes for any information he can get while the latter cites doctor-patient confidentiality (“Laura had see-crets”). They also compare notes on Tibet and ancient Hawaiians. It’s unfortunate that during Jacoby’s next couple of episodes an entirely banal subplot is introduced in which he Madeline poses as Laura.

The One-Armed Man: I was on the road from Memphis selling pharmaceuticals to… some place.

The other face in the frame is Al Strobel’s One-Armed Man (last name Gerard; a Fugitive reference). If this is much more grounded than Mike’s first appearance (in Coop’s dream), there’s still sufficient peculiarity to go round. Mike (middle name Michael) is staying in the Orwellian Room 101 at the Timber Falls motel. He has no record, no warrants against him, but he obliquely fits the face of the man from Coop’s dream. This is a good scene for undercutting expectations, as Mike has no (apparent) recollection of the person Coop thinks he is, and even leading clues, such as his tattoo, do not pay off as expected (he had his tattoo removed; “It said… mom!” at which Mike starts crying).

Audrey: You ever heard of One Eyed Jacks?
Donna: Isn’t that the western with Marlon Brando?

Audrey continues to be by far the most interesting and watchable of the show’s bright young things. Smoking in the school locker room, dreaming of an FBI agent whisking her away from it all, her investigative skills are exceeded only by Coop’s and even that’s without law enforcement agencies at her beck and call. There’s an overt parallel here, with Donna comparing her to Sherlock Holmes (“What else have you figured out, Sherlock?”) just as Harry did Coop.  She also proves to be an excellent actor, feigning repentance to pater (“Please let me be your daughter again”) in order to go undercover at the department store.

Agent Cooper: In the grand design, women were drawn from a different set of blueprints.
Sheriff Truman: Amen to that.
Hawk: Amen.

While all of this is likeably played, it’s evident that the true Peaksy-ness only kicks in when Coop is involved. In particular, scenes with Bobby and Shelly and Donna and James (“This is about us. We have to do this for us not her”) feel like filler, waiting for something more interesting to happen.

The Andy-Lucy subplots are in full effect now and they’re filler of a different kind; quirky, but more irritating than charming. I do like Lucy’s response to Harry’s “What’s going on?”, leading to her summarise the latest events in Invitation to Love. Andy is more centre stage than usual, puzzling over why Lucy isn’t talking to him, which leads to a curiously over-masculine appraisal of Men are from Mars, Women are from Venus proportions from Coop (Harry and Hawk’s has the complementary hue of hearty sexism). It seems less nuanced and equivocal to the Coop we expect.

Sheriff Truman: Ever married, Coop?
Agent Cooper: No. I knew someone once who helped me understand commitment, responsibility and the risks. Who taught me the pain of a broken heart.

However, it leads to a marvellously unreserved recollection from Coop on lost love, and, surprisingly, a hilarious undercutting of the Wise Native American trope I’ve complained that Hawk represents.

Hawk: One woman can make you fly like an eagle. Another can give you the strength of a lion. But only one in the cycle of life can fill your heart with wonder and the wisdom that you have known a singular joy. (pause) I wrote that for my girlfriend.

Surprisingly, the thunderously thick Andy is an excellent sketch artist. Unsurprisingly, he’s a fecking eejit when it comes to stealth raids (his gun goes off, leading to a visit to the shooting range). Sarah Palmer’s vision in the living room of her daughter’s bedroom is clarified as not being a bad edit, as that’s exactly where was while she was in the living room (“I saw him, at the foot of Laura’s bed. He looked like an animal”).

It’s also notable here that here lies another stage in Leland’s disintegration. No longer is he breaking down at a moment’s notice. He has turned rather dark; dishevelled, unshaven, dismissive of Sarah. Even if Wise didn’t know it, there are more than enough pointers here to his character’s eventual reveal, the inner burden of terrible deeds breaking the surface

Agent Cooper: This is the man I saw in my dream. I had an intuition that my dream and Sarah Palmer’s vision were connected.

While there are no fractured realities in this episode, there is further embedding of Coop’s assessment of a holistic universe. Bob is established as one and the same person in both his and Sarah’s visions. He didn’t want to be present at the sketching as, “I’m a strong sender” (Andy’s picture isn’t perfect; “The eyes are a bit closer together”). Coop’s also a crack shot. At the target range Hawk is surprised that the FBI guy only had four hits, to which he replies, nonchalantly “Oh, I put four through each eye then one through each nostril”.

Agent Cooper: Harry, in the heat of the investigative pursuit, the shortest distance between two points is not necessarily a straight line.

Harry accepts all this talk of dreams, although he’s back to his uncertain status after last week’s talk of evil in the woods (“Cooper, I’d think you be afraid to go to sleep at night”). In another example of the kind of recycling that would make Douglas Adams proud, the European pilot’s discussion of synchronicity is regurgitated (“When two separate events occur simultaneously pertaining to the same object of inquiry we must always pay strict attention”). Which is good, as it’s a wonderful Cooperism.

Agent Cooper: The bird that attacked Laura Palmer is a client of this office.

The most fun to be had here is with the visit to veterinary clinic (“Aid to the Beast Incarnate”), in pursuit of Coop’s theory (Laura’s body had bird bites on it, while Mike professes to know a vet named Bob Lydecker). The obvious question is why Coop didn’t just take a look at the Bob Lydecker lying in a coma in the hospital, rather than asking the receptionist at the clinic if sketched Bob is her boss.

Nevertheless, there’s some neat stitching together of clues here. And there’s also Coop and Harry’s encounter with a llama (that would be Tibet again, sort of). After much searching of files (they’re organised alphabetically by the name of the pet), it’s discovered that the bird in question is Waldo, a mynah bird owned by one Jacques Renault. Watching this again, one of the most surprising aspects is how cogently and concisely the disparate elements are brought together. The show isn’t guilty of the kind of free-for-all time wasting of Lost, even though that show takes many of its cues from Twin Peaks. On the subject of birds, there’s a nice big close up an owl.

1.5 is more a solid episode than a top-to-bottom class act. It’s very much more the eccentric procedural with mild intrigue than truly offbeat. Still, there are obligatory food references, so all is still right in the world (“We’re going to need some more coffee”). Josie makes Pete a sandwich with mayo, while Dr Hayward cannot contain his disgust at the latest ready meals (“Donna, who the heck ever heard of diet lasagne?”) 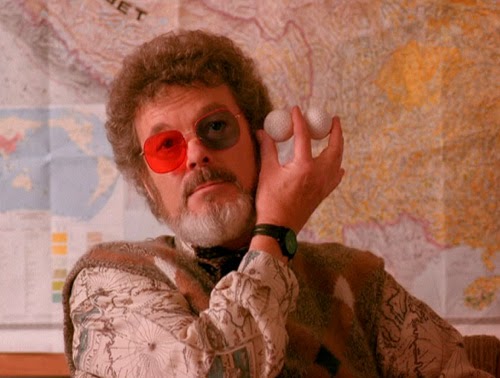 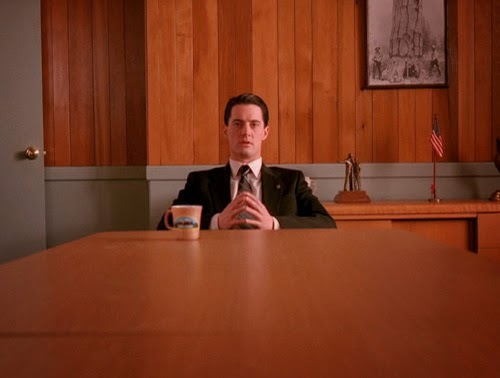 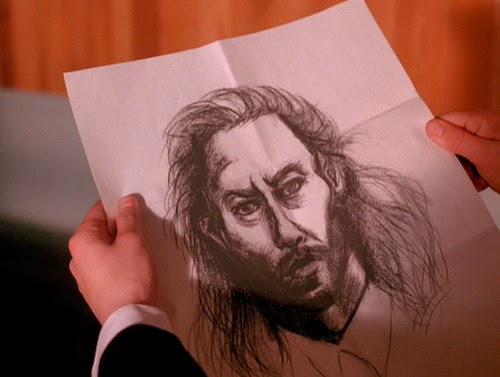 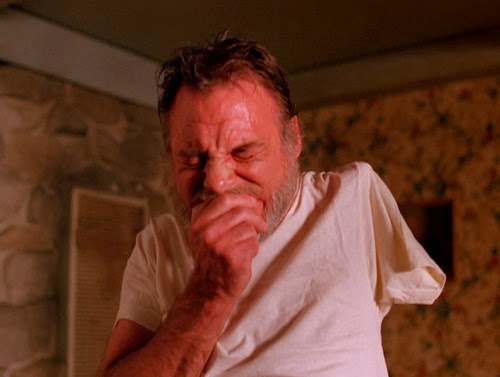 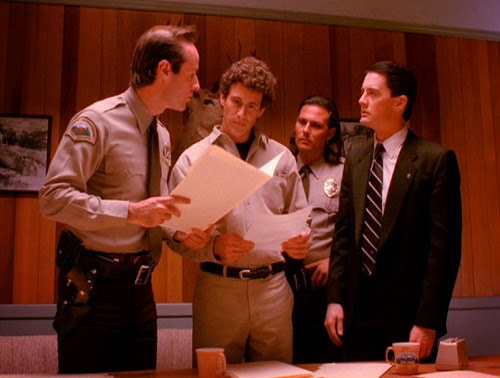