What a thing to get worked up about in this day and age.

David Michôd’s Outback thriller embraces a tentative future vision of pre-apocalyptic, post-economic collapse. It’s gauged not so far from the original Mad Max, and, by avoiding population centres, it avoids answering any detailed questions about how this former First, now Third, World country malingers on. It might have been better if the general thrust of Michôd’s story had remained similarly unforthcoming. For the first forty minutes or so, The Rover is stark, striking, and elusive. It remains a first-rate piece of filmmaking right through to the climax, but the tale wilts into something a touch too tangible and familiar.

Michôd, who wrote the screenplay and devised the story with pal Joel Edgerton, drops us in on Guy Pearce’s Eric, a beardy straggler in cargo shorts who has stopped in for water at a derelict dustbowl station come store when a trio of hoodlums (Scoot McNairy, David Field and Tawanda Manyimo) steel his wheels. Eric sets off in pursuit of his car, and, after a setback (via the butt of a shotgun), links up with witless Rey (Robert Pattinson) to recover it. Rey is McNairy’s brother, left for dead at the scene of their crime, and knows where the gang is headed.

We don’t know why Eric wants his car back so badly, which makes his unmotivated quest existentially engrossing. Is it merely because that’s the kind of thing people do in such a degraded world? The Rover would perhaps have been more powerful if it didn’t furnish answers; if we didn’t discover why Eric has devolved to this ruthless state, rather than depositing a great info dump of backstory at a convenient interlude, and if he didn’t flip his boot in the last scene and show us exactly why he went through all this. The first half of the picture is superior for the its elusiveness and visceral charge, fascinating in the way it resists getting up close to its characters and reasoning out their behaviour and environment.

The plot Michôd settles on is thematically engaged but not as tonally satisfying. Choices fall into place a little neatly and cleanly.  Hints have been dropped from the title down (is it Guy, full of wanderlust, is it a reference to a make of car, or is it all about a hound?) There’s the sequence at a veterinarian’s house where Eric looks meaningfully at hound in a cage. And there’s dumb, devoted Rey, who has been left by his former master (brother) and comes to the rescue (digging under a fence) when Eric is detained by squaddies. The point at which Eric has regained his car (and his dog), he considers just leaving the gang to their own devices. But his faithful new hound all but hangs out his tongue and wags his tail, persuading Eric to go inside and deal with those who stole from him. Eric’s depth of feeling for his pet makes a lot of sense; this is a world where it is easier to empathise with an animal than fellow humans (see also Mad Max 2).

Evidently the relationship between Eric and Rey is the core of The Rover, and the second half of the film is carried along by dint of the lead performances. But a mismatched dysfunctional buddy movie would have been one of the less interesting turns the picture could have taken after establishing itself. Pearce is customarily superb, essaying a character who makes Max Rockatansky look positively cuddly when he blows away a dwarf with the gun he cannot pay for. Pattinson’s chops will only come as a surprise to anyone who didn’t see him in Cronenberg’s Cosmopolis.

The antic edge of the post-apocalyptic genre is glimpsed occasionally; there’s an echo of the muted rawness and palpable tension of The Road, in an environment where killing is a simple fact of daily life (“You don’t learn to fight, your death’s going to come real soon”). There’s nothing as eccentrically peculiar as The Book of Eli’s cannibal couple, but there’s a pervading air of moral turpitude (the grandmother pimping her adolescent grandson) and twisted invention (the broken-down circus, complete with dwarf, suggests someone’s let Gilliam loose on the set). And then there are there are the rows of crucified along the roadside.

It isn’t until the army intrudes upon the scene that we begin to learn a little too much. And, if we start to think about Michôd’s new world disorder, it beings to seem a little doubtful. Given the nature of the collapse, one wonders why currency has any currency at all amid this lawlessness (and why US dollars should be more desirable than Australian ones). Bartering over basics would surely make more sense.

This Oz is a sci-fi informed mishmash, rather than one that wholly makes sense if you try and break it down. That infusion of Chinese culture over the space of ten years carries the conceit of a post-Blade Runner palimpsest, rather than something thoroughly thought through (this presumably extends beyond too; Rey speaks Mandarin, so unless he is a savant, the Chinese also have a foothold in the US). The American characters have travelled to Oz to seek work in the mines, and freight trains carry armed guards, but it’s probably best it helps not to ask too many questions about the whos, whats and whys. Perhaps the state of the nation is best summed up by Eric, who asks his oblivious military captor at one point, “Do you know it’s over for you too?” Complete anarchy is inevitable, the only question is when.

Michôd could no doubt graduate to big budget films with little trouble (he’s attached to a Brad Pitt picture, based on Michael Hastings’ The Operators). An early shot finds a preoccupied Eric drinking water in the rundown store as a jeep tumbles past the window in a cloud of dust. The violence is punchy and visceral (Eric is a badass), so – even given Rey’s particular moment of misconceived gunplay at a motel – there’s little resonance to Eric’s sub-Unforgiven wisdom (“You should never stop thinking about a life you take. It’s the price you pay for taking it”). Michôd ensures the action is both thrilling and unsettling, however; in the early scenes particularly, composer Anthony Partos utilises discordant violin to foreboding and disorientating effect.

Eric’s nihilistic ruminations include coldly disinterring Rey’s rote appeals to a beneficent God and a similarly callous rejection of his faith in his brother. Later, he opines that what hurt the most was not the act of killing his wife and her lover but that no one came after him; no one cared. Michôd shows the limitations of his palette when he gives his characters voice, and so directs his screenplay with more acumen that it necessarily merits. Likewise, Pearce elevates the proceedings with his wiry intensity (Michôd loves shooting his rangy frame from behind, taking in a widescreen landscape). As movies on the verge of societal breakdown go, The Rover wields an immediacy that is hard to beat, but its thoughts on the ease with which we lose our decency and connection to others don’t reverberate sufficiently to match the surrounding craft. 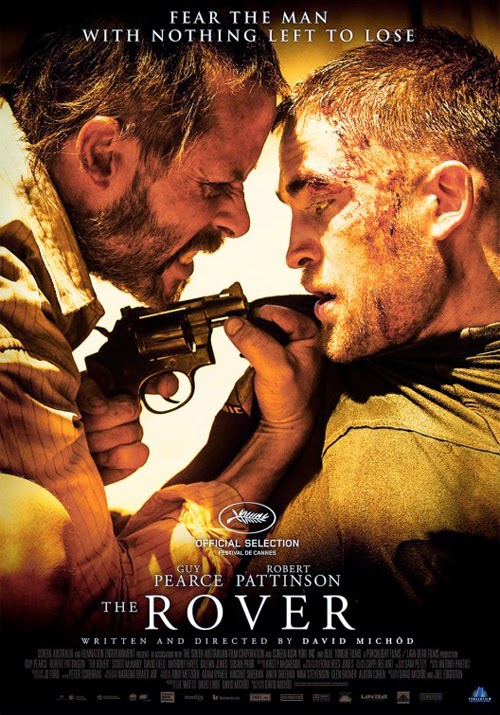