This is no time for puns! Even good ones.

Perhaps I’ve done DreamWorks Animation (SKG, Inc., etc.) a slight injustice. The studio has been content to run an assembly line of pop culture raiding, broad-brush properties and so-so sequels almost since its inception, but the cracks in their method have begun to show more overtly in recent years. They’ve been looking tired, and too many of their movies haven’t done the business they would have liked. Yet both their 2014 deliveries, How to Train Your Dragon 2 and Mr. Peabody & Sherman, take their standard approach but manage to add something more. Dragon 2 has a lot of heart, which one couldn’t really say about Peabody (its sincerer elements feel grafted on, and largely unnecessary). Peabody, however, is witty, inventive and pacey, abounding with sight gags and clever asides while offering a time travel plotline that doesn’t talk down to its family audience.

I haven’t seen the The Rocky & Bullwinkle Show, from which Mr. Peabody & Sherman derives. I haven’t even seen the classic movie version starring Robert De Niro as Fearless Leader (and hasn’t Bob just gone from strength to strength in the fifteen years since?) As such, I’m unable to avow that that the spirit of the original has been desecrated and replaced with an over-explained set-up and generic CG animation (well, I can testify to the latter, but it has been ever thus of late). But the oddball premise is an appealing one; a genius dog with an adopted seven-year-old son (it might have been even odder if Sherman had been Peabody’s biological offspring; the picture gets quite close to the knuckle on several occasions) is so fastidious about his education that he takes Sherman for regular jaunts through history in a time machine of his own design.

Making a feature requires baggage that would be unnecessary in a short; there needs to be an arc of some kind, even if it’s as glib as that of Bill and Ted’s Excellent Adventure (to which this owes a debt; or maybe Bill and Ted owe the original show a debt). As such, Peabody spends a little too much time establishing the conflict that drives the plot; Sherman’s bullying classmate Penny Peterson gets Sherman into trouble at school, so endangering Peabody’s custody. This involves a slightly laboured subplot about Sherman being ashamed of his father being a dog (although this pays off with an “I’m Spartacus” finale).

On the other hand, the custody element incorporates a readily identifiable subtext concerning same sex parenting. There can be little doubt this was intentional, although it has attracted relatively little attention. Certainly, not compared to the much-discussed lesbian anthem in Frozen (of course, Frozen was a zeitgeist-capturing picture; Peabody has barely been noticed). Child Protective Services’ Mrs Grunion (Allison Janney) stands for strict intolerance of anything that deviates from perceived societal norms (“In my opinion a dog can never be a suitable parent to a boy”) and proceeds to impugn Peabody’s parenting skills at every opportunity. It’s no great leap to see the bullying of Sherman bullying (“Beg like a dog”) as arising from having gay parents. One might even see Peabody’s emotional reticence towards Sherman (“I have a deep regard for you as well, Sherman”; it’s only at the end that he can say “I love you”) resulting from concerns over the judgements of those around him.

But it’s the anarchic energy, hard to come by in big screen animations, that sets Peabody apart. It reminds me a little in tone of one Disney’s few forays into the more postmodern Warner Bros style, the underappreciated The Emperor’s New Groove (it may be no coincidence that both share the inimitable vocal talents of Patrick Wharburton). As much as I think the commentary mentioned above is by design, it’s undercut by such batty logic as the custody judgement “Very well then, if a boy can adopt a dog, I see no reason why a dog cannot adopt a boy”. Likewise, this a family movie discussing daddy issues that cheerfully invokes the spectre of Oedipus (“Let’s just say you do not want to be at his house over the holidays, it’s awkward”).

As is usual for DreamWorks, there’s an abundance of mild bodily function and naughty bits jokes. The most inventive of these involves Greek soldiers plopping out of the tail of the Trojan horse in an excretory manner. There are also gags that sail close to the wind; during the climax, where figures from history are fetching up in present day New York (very Bill and Ted, complete with some very obvious one-liners; “Hey, Einstein! It’s a red light!”), Washington and Lincoln offer Peabody a presidential pardon. At which Bill Clinton appears and admits, “I’ve done worse”. The ructions of the climax result from a time paradox, in which two Shermans and two Peabodys exist at the same time and in approximate space. This leads to the Peabody exclaiming, “Sherman, I’ve got to get you out of here before you touch yourself!”). Unsurprisingly, the Grunion exclaims “What?!”, which was exactly my reaction.

Peabody: He is Ay.
Sherman: He is you?
Ay: I am Ay. The grand vizier.
Peabody: That’s his name.

Justice is not served on the Grunion, who seems to be rather let off the hook when Wharburton’s Agamemnon makes off with her to ancient Greece (“The Grunion is mine!”) Given Agamemnon’s fate, this may be commentary in itself. There are four main ports of call in the past, all of which deliver a breathless stream of both obvious and clever verbal and visual gags (and a succession of bad Peabody puns, to which Sherman’s response is “I don’t get it”). The first of these is revolutionary France (“Marie Antoinette sure likes cake, Mr Sherman”), followed by a sojourn in Ancient Egypt (“Oy, again with the plagues. Why did I ever move to Egypt?”) This might have the best in a rum lot of puns (“They get married too young in Egypt… Or perhaps I’m just some old Giza”).

Leonardo da Vinci: The sunshine! The pasta! All the things that make Italy such a popular tourist destination.

Then there’s a visit to Leonardo da Vinci, which appears to have been at least partly inspired by Hudson Hawk (encouraging the Mona Lisa to smile, making use of da Vinci’s flying machine). It’s here that mean Penny is allowed redemptive qualities, with the focus shifting to Peabody needing to slacken Sherman’s leash and granting him a modicum of independent thought. The best recurring joke concerns da Vinci’s robot child (“You ever see that child he made? So creepy”) a freaky Pinocchio affair that resurfaces at the climax (“Papa! Momma!”)

Agamemnon: Smell my victory. Smell it!

The trip to Troy features a sublime Trojan horse within a Trojan horse gag (“I did not see that coming”) and the apparent demise of Peabody. The arch approach to narrative reaches its zenith when Peabody resurfaces, having fashioned a makeshift WABAC (the time machine) from “Bones, stones and yak fat”.

Anchoring all this is a tremendous vocal performance from Ty Burrell as Peabody. Robert Downey Jr was originally attached, but I can’t imagine he would have been as winning. Burrell was by far the best thing in Muppets Most Wanted and he ensures Peabody is highly memorable. Peabody’s unflappable genius and endless skillsets present that rare character who hasn’t been custom fitted to a demographic. His many talents include attempting to entertain Penny’s parents, voiced by Stephen Colbert and Leslie Mann, with his boundless musical talents; hypnotising them with a trick he learned “from a swami at the Begawan Giri in Ubud Bali”; winning Penny’s dad over with his chiropractic skills). He also has a nice line in assured pronouncements (“Mandarin Chinese should be learned as it’s the language of the future”).

The show-stopping conclusion lacks the earlier inventiveness, but it’s to be expected of current “bigger is always better” approach to finales. Rob Minkoff, who nursed the project for more than a decade and seems to have a thing for anthropomorphic cross-species familial relationships (Stuart Little), generally satisfies the competing demands of story and studio (he had the Bullwinkle estate breathing over his shoulder). There are four credited writers, and it’s only occasionally that the bombardment of elements becomes a little too frenetic. He serves up the farce particularly well, as Peabody attempts to keep multiple personas and disappearing daughters from his dinner guests.

Unfortunately, as it means DreamWorks will be further encouraged to play it safe, Mr. Peabody and Sherman was a financial disappointment. It didn’t do anything like the box office the knuckle dragging The Croods did the same time the year before, and the studio has taken a write-down (as well as laying off staff). Did audiences just not want anything too taxing or off-the-wall? Or was it too different in terms of character types? Peabody made less than the also experimental (but not experimental enough) Rise of the Guardians and generic turkey Turbo.  It looks as if the inevitable The Croods 2 and Kung Fu Panda 3 will be the sad and desperate lifelines facing the studio going forward. 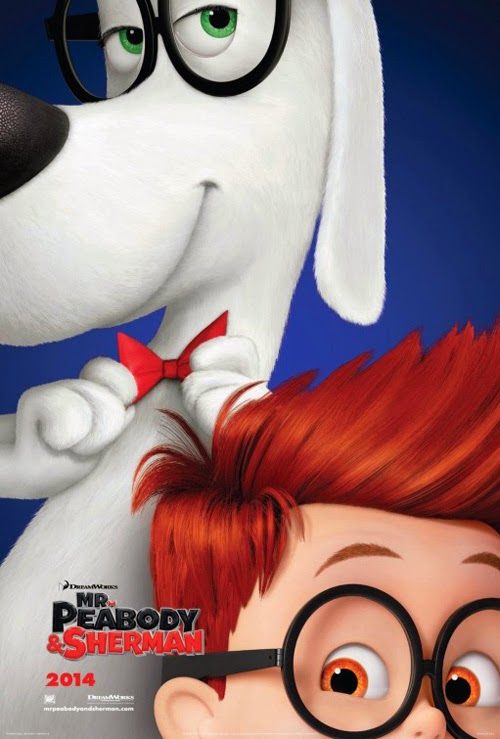