The weak link in an otherwise strong first run, 1.7 is still many times preferable to the nadirs of Season Two. But it’s victim to several humdrum plotlines that fail to grip, and even the visit to One Eyed Jacks isn’t what it might be.

Chivalrous, morally scrupulous Coop diffuses the bedroom tension by asking Audrey to get dressed, of course (“Well, what I want and what I need are two different things”). He even has a clean hanky so she can dry her eyes. What a gallant fellow. Not only that, he orders two malts and two fries and “then I want you to tell me all your troubles”.

Audrey probably should have heeded his advice (“Secrets are dangerous things, Audrey”. Secrets are a recurring theme of the episode, as later we hear Laura refer to “All my secrets, the naked ones. Like your coconut”; a particularly clumsy sliver of exposition that, as it provides James and Donna with the location of the missing tape). Unbeknownst to Coop, Audrey is planning her own undercover visit to the casino (as Hester Prynne, the lead character in The Scarlet Letter).

Where Coop is going as a patron, she is assuming the role of one of Blackie’s girls. This leads to a classic Audrey moment (it’s very easy to remember why she was an instant icon when the show arrived), as she convinces Blackie, who has quickly realised she is lying, not to send her packing by tying a knot in a cherry stalk with her tongue! It also bears note that at one point she hides in a cupboard, chugging away on a cigarette, and no one outside appears to notice.

Laura: Why is it so easy to make men like me, when I don’t even have to try very hard?

The big problem with this episode is that some of the joins start showing. Twin Peaks may not be the most appropriate show to choose if one wishes to witness rigorous plot logic, but it’s in trouble when it shows signs of the kind of desperation of the soaps it is poking fun of, but without the wit.  The most glaring of these is the ruse to prise Jacoby from his apartment so Donna and James can look for Laura’s tape. Dressing Maddy in a blonde wig and hanging about at a truck stop, while baffled Jacoby falls for the notion that it is indeed Laura, is really quite tiresome. This comes on the back the previous episode’s incredible convenience of Maddy finding a tape the police couldn’t in that old “secret hiding place”. Then there’s Bobby following James around (everyone seems to know what they’re up to on this night), and planting drugs in his petrol tank. The only striking part of all this is when Maddy slips out of the house and we see Leland sitting alone in the darkness of the living room, a severe expression on his face.

The use of Leo here isn’t much better. It’s immensely fortuitous that he is listening to a police scanner at the very moment they are talking about Waldo. He’s appears to be a good shot too, able to hit the mynah bird from unconfirmed distance through a window. Harley Peyton wrote this one, so he must take the blame for its expediencies.

Director Caleb Deschanel (mostly a cinematographer and father of Zooey) embarks on one of his rare excursions into the realm of director and includes a few flourishes. Most notable is (a lot! It could be a Brian De Palma movie) blood splattering donuts when the bird is shot (it’s the kind of queasy food-related desecration Hitchcock was fond of, what with his cigarettes stubbed out in poached eggs). It’s also a massive stretch to assume the mynah bird would have some incriminating evidence concerning the fateful night’s events, and even more so that it does.

The actual recording of the bird’s last words is suitably eerie (“Don’t go there, hurting me, hurting me, stop it, stop it, Leo, no, Leo, no”), which goes some way to making up for this succession of narrative stretches. As to Coop’s feelings on Waldo (“I don’t like birds”), we don’t learn why.

The business with Catherine’s insurance policy, and the unlikely partnership between Ben, Josie and Hank, is mildly intriguing, but it’s never in danger of being engrossing (there’s also a scene of Ben and Jerry eating ice-cream; funny, that). It does serve to emphasise that Harry is heading for a fall, and Cooper appears to premeditate that all is not as it should be, even though he goes with Harry’s avowal of her (“How much do you know about her?”)

Agent Cooper: Every day, once a day, give yourself a present.
Sheriff Truman: A present. Like Christmas?
Agent Cooper: Nothing like a great cup of black coffee… Oh, man. That hits the spot.

It’s interesting to see that Harry and Hank have history (“Do you think people really change, Cooper? I don’t”), but not that interesting. However, it leads to a lovely little Cooperism as he suggests daily present giving to oneself… that just happens to involve a cup of coffee. There are too many uninvolving interludes in the episode, though. Andy and Lucy’s frosty relationship is tedious and Nadine has tipped into the realm of annoying.

It’s a good episode for Ed, though. Coop calls in the Bookhouse Boys (yawn) for a little fieldwork outside his jurisdiction. This entails Coop and Ed getting out the dress-up box. Coop comes over all James Bond in a natty tux (“It’s pretty spiffy, Cooper”) while Ed looks suitably ridiculous in a false ‘tache, wig and loud suit. Cooper is so smooth, he doesn’t miss a beat when they arrive at One Eyed Jacks and Blackie calls Ed out (“You look like a cop”, to which Coop replies “I’m the cop”).

Agent Cooper: Whenever I gamble with company money, I always like to bring back a ten-to-fifteen percent return.

The only problem is, this sequence (which extends into the next episode) isn’t nearly as much fun as it ought to be. This is also an episode that ends with someone lurking in the bushes watching Maddy. It’s kind of lazy, indicative of an instalment that never really hits its stride. 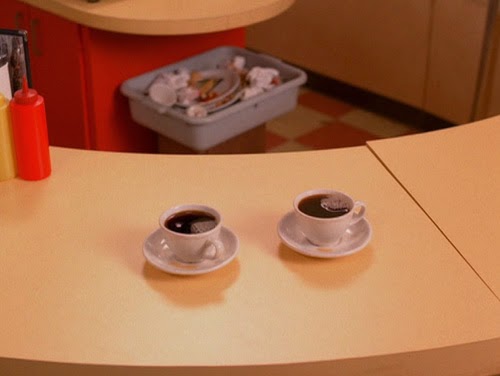 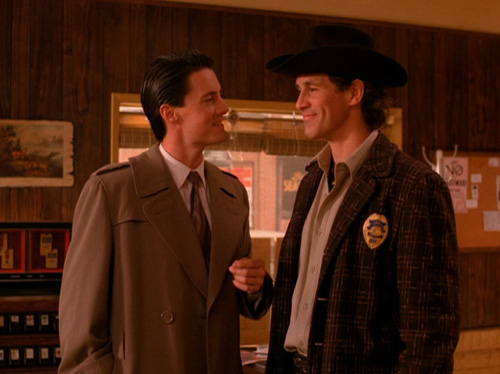 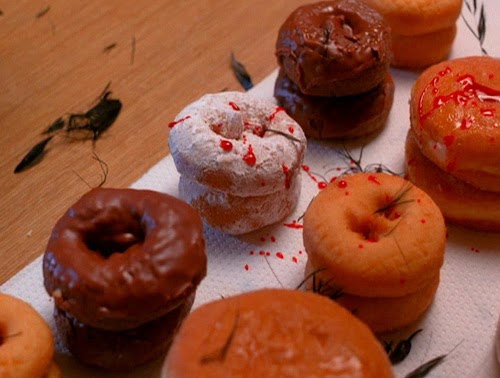 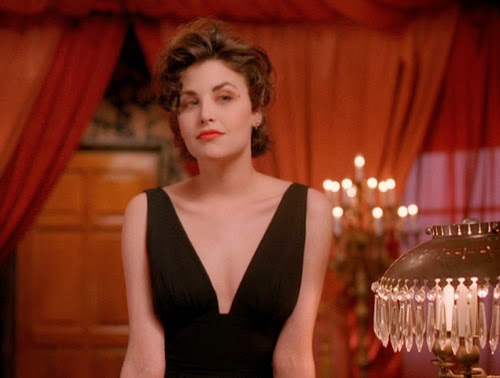 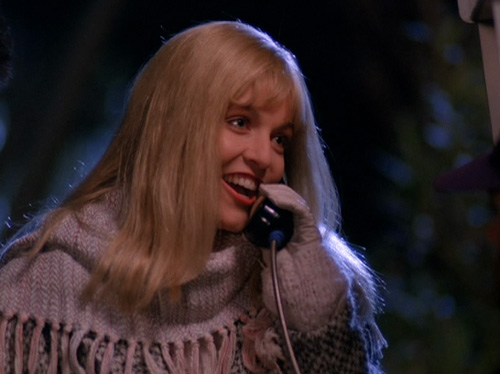