Fire is the devil hiding like a coward in the smoke.

If not quite back up to first gear, Mark Frost’s script for the sixth episode includes a winning combination of the whacky and weird. It’s also blessed with considerable forward momentum. This is Lesli Linka Glatter’s first work on the show, and she’s a mainstay of some of the best TV series around (she started out on Spielberg’s Amazing Stories, and like Tim Hunter she has worked on Mad Men, but also on The Leftovers, Justified, and Ray Donovan). Glatter really gets on with the comedy, and there’s some lovely staging throughout.

Agent Cooper: It just goes to prove the point that once a traveller leaves his home he loses almost 100 percent of his ability to control his environment.

Much fun is to be had at the Great Northern, kicking off with Coop being awoken by a “godawful noise”. The root cause is rowdy Icelanders (“There’s a large group of insane men staying on my floor”), which means Coop needs copious coffee. Richard Beymer is particularly well served humour-wise, paying off the previous week’s gag (“A socialist who wants to be king”) and coming over all JFK (“We are all Icelanders”). The extent of his tentacles is further revealed, by which we discover he is in league with Josie to supplant Catherine (a very devious web there).

There’s also a lovely little scene of escalating insanity, in which first Jerry arrives with an entire leg of lamb, courtesy of Hebba (“a giant snow queen”) then Leland stops by, has another breakdown, to the background hum of the Icelandic entourage. Glatter times it all impeccably timed. Leland is back in disconsolate mode later, with only Catherine’s intervention on the dance floor to prevent another scene (complete with improvised Leland-mimicking hand gestures).

Coop’s encounters at the Great Northern aren’t limited to unruly Icelanders. Audrey’s in particularly vivacious mode, oozingly provocative with Coop at the outset and ending up under his covers at the climax. It’s a Twin Peaks in full soap cliffhanger mode (will Coop do the dirty with the young girl?) It’s generally a good episode for the attire of repose, as Maddy also looks rather cute in her PJs.

Audrey is at her most manipulative, “persuading” department store manager Emory to put her on the perfume counter (“If you don’t, I’m going to rip my dress apart, scream at the top of my lungs, and tell my father you made a pass at me”).

Have I mentioned how banal anything involving James and Donna is? I know I have, but it bears repeating and repeating ad infinitum. There’s a particularly ripe scene here where James is fed dialogue about how dad was a musician and mom was an alcoholic. I all but nodded off. They secure the help of kooky cutey Maddy, who orders Cherry Coke and voices Lynch’s world of psychic interconnectivity (“The day before she died I had a feeling Laura was in trouble”).

In contrast, the Shelly-Bobby subplot is particularly good this time, although their most memorable scenes are where they aren’t together (perhaps that’s why). There’s an alarming scene where Shelly and Norma return from the beautician looking like a couple of drag queens, but the main event occurs when Hank beats up Leo. It’s a surprise to see the wife beating bully so roundly bested (“I told you to mind the store, Leo, not open up your own franchise”).

Hank’s hyperactivity does rather beg the question of what would have happened if he hadn’t been paroled. I guess Leo would be the fall-back guy, but Hank seems fairly crucial to a series of dodgy endeavours. If Coop’s cliffhanger is the soap one, Shelley’s is the dramatic one, as she points a gun at her raging husband (“You’re not going to hurt me again!”), it fires, and we hear his scream. The resolution is akin to Coop’s announcement of knowing who killed Laura a few episodes ago; Leo’s fine, aside from a grazed arm.

The scene between Bobby and Dr Jacoby is dynamite. It’s surprising and compelling for a number of reasons. Glatter starts off in comedy mode, bouncing the camera back and forth from Bobby’s dad to his mom at the uneasy family counselling session. This leads to a particularly chortlesome piece of Bobby petulance.

Bobby: Have you every killed anybody?
Dr Jacoby: Have you?
Bobby: My father has.
Major Briggs: During wartime.
Betty Briggs: That’s different.
Bobby: Different from what?

The best is to come, however. Everything so far has suggested Jacoby is a complete flake, with an unhealthy passion for his expired patient. Yet his method with Bobby is perceptive and yields profound results. For the first time we see Bobby in a sympathetic light, a boy who has played at being a man due to the manipulation of the girl who was out of his league.

Dr Jacoby: What happened the first time that you and Laura made love?
Bobby: What the hell kind of question is that?
Dr Jacoby: Bobby, did you cryyyy?
Bobby: Did I what?
Dr Jacoby: And then what did Laura do? Did she laugh at you?

Bobby’s account of Laura’s state of mind and view of the world, how “people liked to be good, but they were really sick and rotten, her most of all” and how she was periodically pulled deeper and deeper into the blackest nightmare, finding it harder and harder to climb back up into light, is highly evocative, and Jacoby’s analysis is shrewd (“Laura wanted to corrupt people, because that’s how she felt about herself”). This leads to Bobby’s revelation that behind the rebellious teenager is a sensitive soul (“She made me sell drugs”). It’s a great scene.

Glatter shows similar deftness in the scene at Jacque’s apartment. Why exactly a copy of Flesh World is stuck(!) to the ceiling is anyone’s guess, but it instantly puts the scene off kilter; Coop sustains a conversation while staring at the ceiling, and we think it must be just another quirk until he asks Harry for a leg up. There’s also a classic moment where donuts are passed round, and a succession of latex-gloved hands grasps the confectionary.

Coop’s on top deductive form, concluding it was Jacque Renault’s blood on Leo Johnson’s shirt and that a partial picture is of Laura (“The drapes, Harry, from my dream”). When they arrive at the cabin in the woods, Julie Cruise is playing (Into the Night) and it further confirms Coop’s dream insights (“And there’s always music in the air”). Since Waldo is in the cabin, and the poker chip with the piece missing is also there (the piece found in Laura’s stomach), it seems that everything is beginning to fall into place.

It’s curious then, that Coop is so uncharacteristically reticent when the team come across the Log Lady’s cabin. It’s Hawk, tracking like a demon, who gets to be all sage (“The wood holds many spirits, doesn’t it Margaret?”), and who insists they remain with her rather than continue in search of the correct cabin. Shouldn’t Coop be following such intuitive leaps, particularly as he earlier failed the Log Lady’s test? Even his manners are off (reaching for a biscuit, the Log Lady slaps his hand and instructs him to “Wait for the tea!”)

Nevertheless, he eventually sees sense, and cryptic metaphors shrouding her language are both strange (“The owls won’t see us in here”) and revealing (her first-person narration of what she heard on the night of Laura’s death include “The owls were flying… Two men. Two girls… The owls were near… One man passed by… Screams far away… Terrible, terrible… The owls were silent”) and mention of a third man. Dr Hayward’s interpretation of her words about her husband (“He met the devil”) suggest there is clear understanding to be gleaned if she can be decoded (“It was the day after the wedding, wasn’t it, Margaret?”) The conclusion reached by Cooper sets up much of what Lynch will play out in his prequel movie (“Laura and Ronette. Jacques, maybe Leo. Who was the third man?”) Glatter even throws in a little tableau pose of the four hikers as they happen upon Jacques’ cabin. Although, rather than owls, a crow observes their progress.

After the fairly standard practices of 1.5, this scene is a sure sign that the motor that powers the ship is the peripheral realm of the uncanny. Stray too far from it, and Twin Peaks begins to look too much like other shows, gradually losing its lustre. The last two episodes of the season are more in the manner of 1.5. 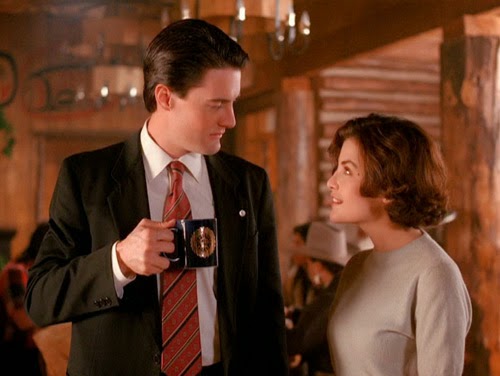 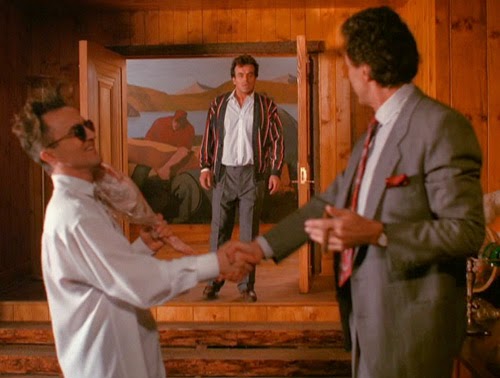 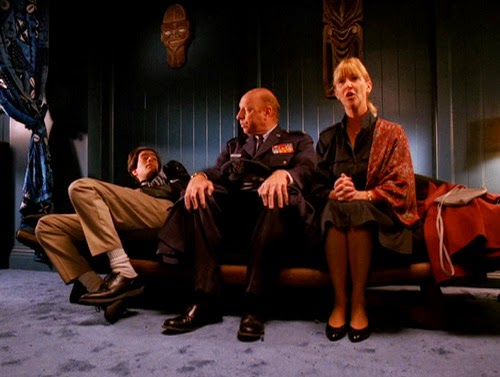 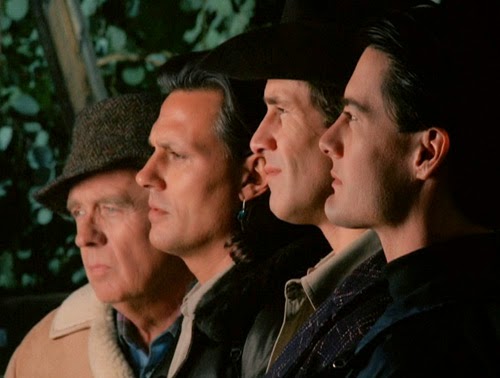 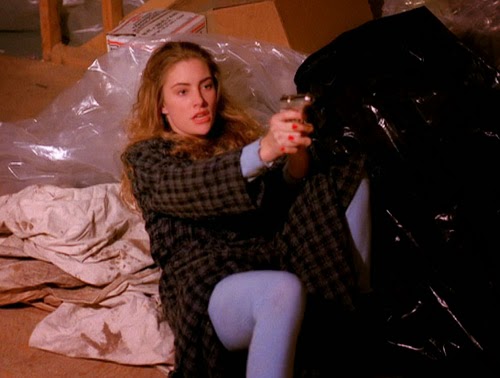