I want no interference from this hulking boob, is that clear?

Another damn fine episode, and one with neither Frost nor Lynch credited in writing or directing. Harley Peyton was a producer on Twin Peaks, and would script no less than fourteen episodes (including uncredited work on 1.3). He wrote screenplays for Less than Zero and Heaven’s Prisoners, and most recently was attached to the still born Jonathan Rhys Myers Dracula show. Tina Rathborne directed (and returned for season two) but has done nothing since.

It will be interesting to note which Season Two episodes Peyton penned, as here he takes to Lynch and Frost’s characters and scenarios like a duck to water. There may not be anything as profoundly odd as Lynch would come up with, but in terms of humour Peyton is completely on the ball. It is interesting how literally he transcribes the last twenty minutes of the European version of the pilot into Coop’s dream, however (right down to the 25 years later, and Mike and Bob in the hospital basement); Coop evidently experienced it in its entirety, even the really boring bits with Harry and Lucy. So I guess my comments about the extended version TV movie not being canon are remiss, as long as you see that version as being a leap into Coop’s 1.3 dream.

Agent Cooper: Harry, let me tell you about the dream I had last night.
Sheriff Truman: Tibet?
Agent Cooper: No.

Despite having called Harry at the end of the last episode to proclaim he knew who killed Laura, now Coop says he cannot remember the name dream Laura whispered in his ear (Harry and Lucy successively recite “Damn” in response). It’s a bit of a cheek, but quite funny too, that Lynch and co should mislead the audience so outrageously. Coop believes the subconscious to contain all the necessary answers, much as with his milk bottle deduction last week (“Break the code, solve the crime”).

As far as solving that crime is concerned, we move a little further forward, but not a lot. Coop’s dream is validated by Albert explaining she was tied up twice on the night of her murder (“Sometimes my arms bend back”) and we learn that she had yet another impossible job to juggle; like Ronette Pulaski, she worked at the perfume counter at Horne’s Department Store.

Agent Cooper: Leo. Is that short for Leonard?
Leo Johnson: That’s a question?

The two prime milk bottle suspects are visited. Leo is predictably unforthcoming, denying that he knew Laura (“You’re lying” responds Coop directly). Jacobi (wearing a cape!) is interviewed by Coop at the post-funeral graveside. He testifies that Laura reached his heart in a manner he thought impossible, which doesn’t exactly exonerate him, but puts him in a more sympathetic light than before.

The reveal of the Bookhouse Boys is a little on the lame side, to be honest. There’s a good idea here, one that contributes substantially to the show’s mythos, but they’re entirely unconvincing upholders of the faith. Harry first appears as a straight-edger, yet now he’s talking earnestly about great evil. Dependable Ed too, and dullard James. These aren’t the types to have any insight into the darkness, although I guess that may be why they take such a blundering approach (kidnapping Bernard Renault, played by Clay Wilcox). A name like the Bookhouse Boys is on the Neanderthal side. Let’s not forget Joey Paulson (Brett Vadset) either, there to make up the numbers (he will appear one more time).

Sheriff Truman: Twin Peaks is different, a long way from the world. You’ve noticed that. That’s exactly the way we like it. But there’s a… backend to that that’s kind of different too. Maybe that’s the price we pay for all the good things. There’s a sort of evil out there. Something very, very strange in these old woods. Call it what you want. A darkness, a presence. It takes many forms, but… It’s been out there as long as anyone can remember, and we’ve always here to fight it.

It very nearly cheapens the effect, having Harry deliver this arcane knowledge. The idea that there’s a price to be paid for the upside is an engaging one, a form of dualism, but the matter-of-fact translation into having a pop at Bernard isn’t nearly as engaging. It’s nebulous, of course (what exactly is so remarkable about Twin Peaks’ upside, aside from being a garden of eccentrics?)

The series’ occult aspects are essential to its abiding status. They imbue its sense of mystery and the unknowable, in much the same way as Lost later attempted (and fumbled) with its poles of light and dark. There will be much talk of (masonic) lodges, secret brotherhoods (the Bookhouse Boys), and owls (a masonic symbol) not being what they seem. This interest in secret societies may principally come from Frost, rather than Lynch, but it adds an undercurrent that, with the ritualised abuse posits a post-Blue Velvet malignancy beneath the innocuous surface, a world of ancient and opposing forces at work. Such themes coalesce in some of the more extreme conspiratorial whisperings that have followed the Savile case, and Twin Peaks, to some (33rd?) degree reflects that power and depravity are deeply entwined.

Deputy Hawk is also one of the Bookhouse Boys. Being a Native American, it’s necessary to indulge the wise Indian stereotype. This means he’s the only local (besides the Log Lady) to whom Coop defers.  The final scene is nicely edited, with Leland experiencing another jazz-infused dancehall disintegration (“Dance with me, please!”) while Coop and Hawk philosophise. Hawk espouses a Blackfoot legend about dream souls who wander “Far away paces. The land of the dead”. It might have been more fitting for a show as off kilter as Twin Peaks to subvert the noble Native American (he’s the best tracker too!), to turn Hawk into a Polonius figure spouting nonsense masquerading as wisdom. It does serve to the series’ zeitgeisty credentials, though. It was during its airing that Dances with Wolves won the Best Picture Oscar.

The central event of 1.4 is Laura’s funeral, which inspires a predictable face-off between James and Bobby. Bobby indulges a particularly petulant teenage rant (“Everybody knew she was in trouble but we didn’t do anything!”), having earlier warned his military father (Don Davis perfectly capturing the starchy military manner, unable to be that dad that’s needed despite having read all the books on teenage psychology) he would disrupt the ceremony. The two Laura suitors nearly come to blows in an effective slow-motion charge, slowed vocals adding to the effect.

Johnny Horne proclaims “AMEN!” but the highlight is another bout of Leland limelight hogging. He topples atop Laura’s coffin, his weight causing the lifting crane to stutter and whirr. He rises up and down, weeping, as Sarah pleads “Don’t ruin this too!” Lynch couldn’t have accentuated the absurdity better himself.

Twin Peaks also manifests a much-loves soap device of the desperate soap; the doppelganger, in order to allow Sheryl Lee to return in a living, breathing role. Maddy is the actual embodiment of the impossibly wholesome girl, the contrast to Laura. She’s mousy and demur, but emotionally giving. Lee hides behind huge glasses, and it’s almost as if Lynch and Frost had been inspired watching Plain Jane Super Brain in Neighbours (not that this character type is uncommon).

Any business with Harry and Josie and, unfortunately, Catherine (the series is a bit of a waste of Piper Laurie, really, as hers is such a one-note part), is a bit empty, really, but fortunately that’s in short supply here.

Agent Cooper: What I want to know is why in the world you would tell us where and when to find him.

Coop is on good form, although he’s eclipsed by the episode’s star turn, of which more momentarily. He’s still beguiled by the wonders of nature (“It’s an absolutely beautiful morning!”;“Look at that! Ducks on a lake”) and the town in general (he’s looking at Pension plan options with a view to buying). His deductive skills are foremost (“Big Ed, how long have you been in love with Nadine?”) and he susses that they are unlikely to avail themselves of a meeting with Jacques Renault (Walter Olkewicz). He also identifies Audrey as the one who wrote him the Jack with One Eye note.

Ah yes, Audrey. Cooper leads a scarlet blouse-clad Audrey on (“That perfume you’re wearing is incredible”) and then seems to possibly backtrack (“Audrey, that rightward slant in your handwriting indicates a romantic nature. A hear that yearns. Be careful”, to which she responds sincerely, and maritally, “I do”). Later there’s more of Audrey snooping, this time wearing fetching funereal black, as she eavesdrops through a priest hole on the Horn family preparations (Jacobi encouraging Johnny to remove his headdress; I could readily imagine Bruce Campbell playing Johnny).

Albert: Sounds like you’ve been snacking on some of the local mushrooms.

Coop’s engagement with Twin Peaks (he delivers a paean to the decency, honour and dignity of the people of the town, where life has meaning, every life) receives short shrift from Albert. Ferrer’s performance and dialogue are a sheer delight. While it’s good to know Coop can put him in his place, once again we applaud the forensics expert for his insults and casually caustic approach.

Albert: Dr Hayward, I have travelled thousands of miles and apparently several centuries to this forgotten sinkhole to perform a series of tests.

We first see him battling in the morgue with Dr Hayward for rights over Laura’s corpse. His every line is an explosion of scorn (“I’ve got compassion running out of my nose, pal. I’m the sultan of sentiment”) and Ferrer’s little touches (the two toots on the drill prior to entering Laura’s cranium; “I’ve got a lot of cutting and pasting to do, gentlemen”) are genius.

He also thoroughly destroys Benjamin Horne, accusing him of venality, insincerity, and a rather irritating method of expressing himself. It takes some doing to push MacLachlan to the side-lines, but Ferrer achieves it (“Cooper, this old fool is obstructing an investigation. Cuff him!”) MacLachlan has to content himself with calm remonstration in the face of Albert’s demands for disciplinary action (“He hit me”; “Well, I’m sure he meant to do that”).

Albert: And you, you chowder head yokel, you blithering hayseed, you’ve had enough of me?

Best of all is Round Two with Sheriff Truman. Rather than being put in his place by Harry’s words the previous episode, they have only served to rouse Albert’s ire further (“I want no interference from this hulking boob, is that clear?”) Even when Harry resorts to physical retorts, it does nothing to dampen Albert’s overt contempt (“That old rustic sucker punch, eh?”) Indeed, his last line insult, during his announcement of the autopsy results, is the biggest zinger. Harry formulates a theory based on the presented facts and Albert throws back smugly “Look, it’s trying to think”.

Sheriff Truman: How would you like a fresh slice of huckleberry pie?
Agent Cooper: I would love a slice of pie.

So this is another first class instalment, one that even makes time for the all-important food. As per usual thus far, the episode starts with a meal. This time it’s breakfast involving coffee and griddle cakes (“Nothing beats the taste sensation when maple syrup collides with ham”). Later, Pie Watch goes to the next level as Coop tries some huckleberry pie (“This must be where pies go when they die”). 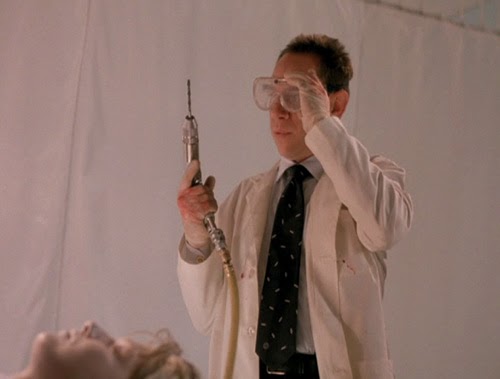 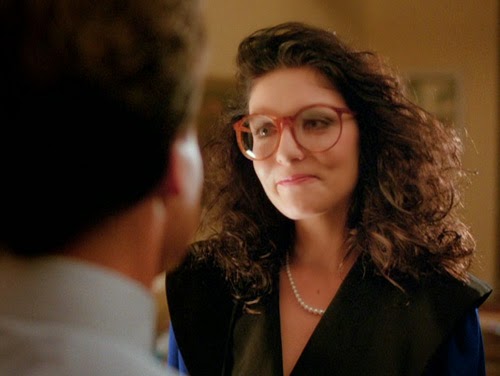 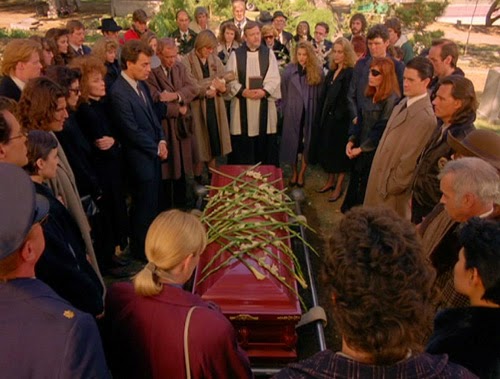 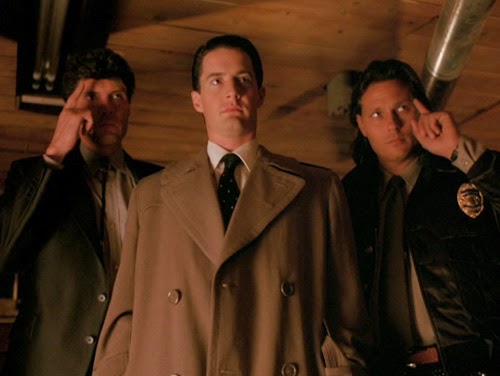 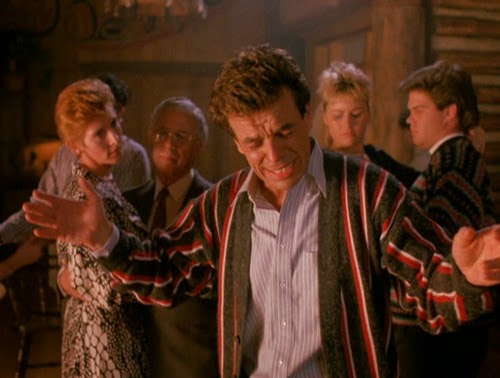