Are you one of those single-tear people?

Damien Chazelle’s awards season darling (in particular for its best supporting actor Oscar shoe-in) arrives laden with expectations beyond its own modest means. That it’s unable to meet them shouldn’t necessarily mark this out as typical of darlings of such ceremonies, where voters are seduced by surface detail, or an idea rather than actual quality. Whiplash wears its love and understanding of music on its sleeve, whereas, for example, science whizz flicks The Theory of Everything and The Intimidation Game are left looking tone deaf in respect of their own specialised subjects. Where the film flounders is redirecting a tale that unfolds, in the first part, in a loose but compelling fashion into one that is overly schematic.

Like the eccentric Frank, Whiplash is a film about the gulf between aspiration and success. But where Frank considers the elusiveness of the creative urge, and the responses it kindles in those without it, Whiplash posits, through its tutor-Nazi, that talent is only truly actualised through hard, harsh, painful, graft; blood, sweat, tears and most probably vomit and entrails to boot.

Chazelle’s picture has an autobiographical element; as a member of the Princeton High School jazz band, he experienced both an overbearing instructor and a deleteriously competitive atmosphere. He has (understandably) amped up the sheer venom and animosity of Shaffer Conservatory music school teacher Terence Fletcher (J K Simmons). He becomes a malevolent monster, raining down blows both verbal and physical upon his students. It’s more dramatic that way, and there are more fireworks. It’s difficult to believe, however, that someone partial to such wanton abuse would have gone unchecked for very long in the current system.

Simmons is a mesmerising presence; chrome-domed, dressed in black, his eyes and neck veins bulging with each new splenetic character assassination. He’s Fame’s Mr Shorofsky caught in a teleportation machine with R Lee Ermy’s Full Metal Jacket drill instructor. The challenge Chazelle sets himself is take the audience from mystification at why anybody would willingly undergo such vile treatment (probably not so difficult to process if you’ve seen Ramsay’s Kitchen Nightmares) to understanding the students’ perspective (namely Mile Teller’s dedicated drummer Andrew Neiman), whereby they really buy into the bullshit philosophy Fletcher spouts (“There are no two words in the English language more harmful than, ‘Good job’”).

Indeed, Chazelle appears torn by the sheer charisma of his creation. In some respects, the movie should have finished when Andrew, having fully lapped up Fletcher’s (terribly obvious and low-brow) psychological manipulation, crashes his rental car en route to a performance. Bloodied and concussed, he reaches the venue but is unable to deliver in his broken state. Fletcher tells him he’s through, and in an uncontrollable rage Andrew attacks him, giving the bully the beating he deserves (at least, in cathartic terms). Andrew has surrendered everything to become one of Fletcher’s sheep. He takes the tutor’s abusive references to his absent mother and complacent but well-meaning father (Paul Reiser) on the chin. He breaks off with the cute girl from the cinema popcorn counter (Melissa Benoist), as she will be a distraction from his work.

Andrew dedicates himself to breaking point, his fingers bleeding, barely able to hold his drumsticks, his body contorted into the unbecoming expression of one stroking out, or in the grip of a monumentally difficult bowel movement. We wonder throughout, is this worth it? And yet, when there are slivers of recognition, we are with him in his achievement. So much so that we rebuke him for allowing that smile of triumph, or the arrogance of his supposed superiority over his peers, not only because such pride comes before a fall, but also because it will unleash the next cruel test from Fletcher.

Chazelle shoots this close-quarter combat with an eye on maximum tension, and the practice sessions are gripping experiences. There’s nothing flashy about his technique, but he has the rhythmic savvy to know how to best manipulate a scene to deliver the intended message, even when (or especially when) there’s no actual talking involved.  Occasionally, he falls into repetition a little too much, with the close-ups of battle scars and bloody plasters and ice buckets, but even that serves the manner in which he’s marrying the musical form with the visual.

It’s all good, basically, until the third act shift, post Andrew’s meltdown and expulsion. At the instigation of his father and a lawyer, who cites an earlier incident in which an ex-student committed suicide, his mental health issues brought on by Fletcher’s methods, Andrew agrees to sign a complaint against Fletcher. Fletcher loses his job, while Andrew gives up drumming. Then, one day, Andrew sees Fletcher when the latter is performing in a club. Fletcher offers him a spot in his band for a festival concert. We can see where this is going, even if Andrew is oblivious.

What it becomes, as Andrew is inevitably humiliated but then rallies, returning to the stage and taking control with an improvised jazz drum solo, to the initial fury and then the thrill of Fletcher, is a vindication of teacher’s techniques. The picture veers into heightened wish fulfilment fantasy, losing its hitherto slender threat of believability. In an earlier conversation, Fletcher admits that his wrathful method, inspired by a cymbal thrown at Charlie Parker (the experience inspired him to become the great he was) never did produce someone of such musical stature. This appears to be the waited-for vilification of Fletcher’s merciless-to-become-a-master approach. Yet the finale retreats, less certain, wrapping his modus operandi in a bow and suggesting maybe there’s something to it after all; Andrew has broken on through to the other side and become a crazy cool hepcat.

It’s a disappointingly neat and even-handed resolution. The hard-pressed student will go on, in his dotage, to pronounce Fletcher the greatest Yoda he ever had, while Fletcher can take comfort in the certitude that someone made his unrefined madness worthwhile. Is it justified, treating others like dirt if it makes them better artists? In the finality, Chazelle appears to offer a tentative yes. Even daddy Reiser gets to see his son pass into the realm of wondrous performance. Can it be argued that such sadism has its place? As is pointed out during a heated dinner table conversation, the example held up for the musical fraternity, Parker, was dead at 34. Perhaps then, if one’s goal is to live fast, die young, and make an impression. Maybe Chazelle intended to leave his audience with more of an open debate than he does. If so, he will surely have a surer grip on theme when his sophomore effort comes around.

Whiplash is one of those Best Picture contenders that has failed to catch on, regardless of the acclaim. The reason is probably that it’s a difficult sell, despite elements that would usually be seen to engage (the against-the-odds battle for success, beloved of the sports movie).  I’ve heard viewers post-the-fact voice the doubt that they would have liked it, and the raves appear to have been unpersuasive in that regard. Chazelle has gone from Black List to Sundance short to full-fledged feature, and has been paid off with five Oscar nominations. Does the film deserve them? Well, both Simmons and new Fantastic Four-er Teller are outstanding. Chazelle’s direction is invigorating. It’s only in the area of his nominated Adapted Screenplay that he flounders (although, he ends up near the top of the quintet there; he would be near the bottom if he had qualified for the Original Screenplay roll as most agree he should).  Should it have been nominated for Best Picture? No, but Chazelle’s feature is in good company in that respect this year. Whiplash is mostly an immersive, driven piece of work, but the final act, the stuff of Oscar-pleasing gestures, ultimately detracts from its many strengths. 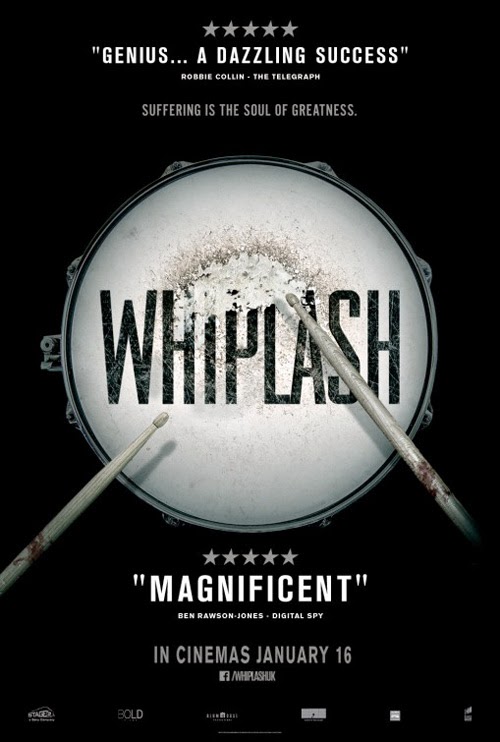