Stranger danger. Keep your eyes down, there’s some sort of bear.

There’s good reason to be surprised at the pedigree of Paddington. Aardman aside, British animations are often less than auspicious, and the history of CGI-character-led live action adaptations of children’s favourites have generally met with tepid results (Yogi Bear, Scooby Doo). Nothing in the pre-release material, not least the generically cute design of Paddington himself, led me to think any differently. Then there was the loss of Colin Firth as the titular bear. If even Firth was quitting surely it must stink? And yet Paddington is a hugely enjoyable family movie, stylishly made, witty, sweet without being mawkish, and updated without offending defenders of the novels. It also manages to be very English, in a way that plays on Hollywood concepts of Englishness but also because it actually is.

Firth left the project because Paddington “does not have the voice of a very handsome older man, who has the most beautiful voice on the planet”. As someone used to Michael Horden’s mature tones, it took a while to get used to the wispy Ben Wishaw’s youthful bear, as much as the endearing stop-motion Paddington of the BBC TV version had a sense of character and poise this fully mobile, gymnastic type lacks. That aside, however, this Paddington comes complete with duffle coat, marmalade-sandwich concealing hat, brief case, and an unerring politeness that transcends his ability to make a hash of things (which all turn out fine in the end).

Director Paul King co-wrote the screenplay with Hamish McColl (of Mr Bean’s Holiday and Johnny English Reborn; if not for those, I might have said it gives hope for McColl’s Dad’s Army script but Emma Thompson also did a pass on this). King was responsible for the inspired visual disturbia of The Mighty Boosh, which goes a long way to explain the inventiveness on display here. The script shows significant fidelity to the books, albeit with the winning embellishment of explorer Montgomery Clyde (Tim Downie, wonderfully British Empire) discovering the bears and teaching them English.

This sequence, playing as sepia newsreel footage, is chock full of sight gags (one of which includes mild innuendo over which the BBFC twisted its knickers) and introduces us to Aunt Lucy and Uncle Pastuzo (Imelda Staunton and Michael Gambon). No kid’s movie is complete without a slice of tragedy, and it’s after this that Paddington is packed off to England. He arrives, eventually, at the station that lends him his name, where the kindly Browns discover, and christen. They also take him in, at their home of 32 Winsor Gardens, Notting Hill. Of course, this all needs a skullduggerous plot to hinge his mishaps on, so a nefarious taxidermist (Nicole Kidman’s Millicent) is bent on stuffing him to boot.

I say they welcome him. Mrs (Mary) Brown is instrumental in whisking Paddington home, wearing nowt but a hat and luggage tag (that’s Paddington, not Mrs Brown). Mr (Henry) Brown is a safety-obsessed sourpuss who wants the bear to move on at the first opportunity. Sally Hawkins is utterly beguiling as the dappy hippy mum, and Hugh Bonneville’s grumpy boots dad equally and oppositely matches her.

I don’t really know Bonneville’s work (I studiously avoid Downton Abbey), but his hugely game performance takes in a carefree pre-parent persona and a hilarious manifestation as a cleaning lady (who then proceeds to flirt with a lusty security guard – BBFC ahoy!) There’s an odd moment at the end where, having stood firm in defence of Paddington as a member of the family, dad bitches out and leaves him to the mercy of Millicent, but generally he turns out to be a good sort (his reference to Paddington’s “worrying marmalade habit” is up there with Dougal’s resistance to his sugar lump addiction in Dougal and the Blue Cat).

Before long Paddington is getting up to unintended mischief, flooding the bathroom (again, King’s visual panache is in full effect), using toothbrushes as ear syringes (a deliriously bloik-worthy sequence that has the expectedly bleurgh-gusting pay-off) and pursuing a pickpocket, The latter chase becomes ever-more unhinged, as Paddington accumulates various items that cross his path (a skateboard, a policeman’s hat, a whistle), before launching skywards, Mary Poppins-like, with an open umbrella.

Other inventive sequences see him embroiled in Sellotape while Millicent does a Tom Cruise in Mission: Impossible to bearnap him (the theme tune is used for a later scene of Paddington derring-do). An extended set piece in the Geographer’s Society is a Gilliam-esque maze of postage tubes and BBC Micros, where one misplaced marmalade baguette can gum up the entire works.

Elsewhere King gives us a gaggle of marmalade-fixated pigeons, a dollhouse presentation of the Brown’s own house, Paddington giving his “hard stare”, an encounter with an escalator, an interlude with a Beefeater’s TARDIS-like hat (this when Paddington believes he is no longer welcome at the Brown’s and is seeking out the Clyde), and a calypso band performing on any given street corner. The creativity here puts most family movies to shame, particularly in its easy idiosyncrasy.

Of the remaining performers, Madeleine Harris and Samuel Joslin manage not to be the annoying kids, and King wisely doesn’t turn this into a picture that is all about their relationship with the bear. Julie Walters is rather tiresome, wheeling out her old woman Walters routine as Mrs Bird. It’s one we’ve seen a million times before (Walters was much better in The Harry Hill Movie).

Peter Capaldi plays neighbour Mr Curry as a seedy-eyed masturbator (as Doctor Who actors showing a different side go, it compares to Patrick Troughton in that Morse episode) who is, most amusingly, instantly smitten with “honeypot” Millicent.

It’s Kidman who is the real weak link in this picture, preventing it from climbing to the heights of instant classic. We’ve seen before that she has no facility for comedy (The Stepford Wives). Bless her for giving her kids something age-appropriate to see, but mum’s comic timing will not be visible. Glenn Close was the kind of big performance needed (or, better still, Miranda Richardson). Kidman fully embraces an array of tight costumes but is otherwise utterly unmemorable.

Paddington is, as I’m sure Michael Bond would agree of his source material, a consummately white middle class depiction of Englishness. And yet it’s impossible to miss the theme of inclusiveness and acceptance of (illegal) immigrants running through the picture, set against London’s cultural melting pot and more particularly that of Notting Hill. The movie will probably do more for a moderate position – certainly for young malleable minds – than any heated debate.

Paddington will doubtless earn sequels irrespective of its Stateside performance. Yes, the PG rating is ridiculous (illustrated by the BBFC subsequently moderating its own guidance), but it’s done nothing to quell the universality of its appeal. It isn’t perfect, and there’s definite room for improvement next time out (but one actually gets the impression they will improve things rather than stir-and-repeat), but this is a genuinely smart family movie, and an endearingly goofy one that never speaks down to its target audience and doesn’t fall back on shameless cutesiness. 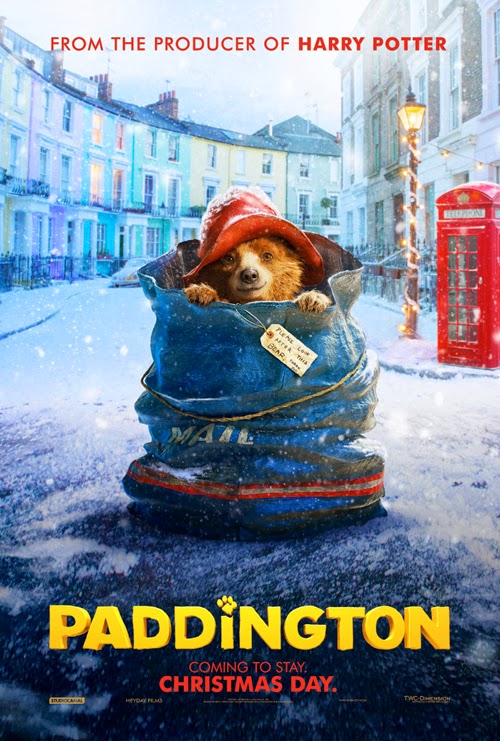