I miss my wigs.

The chief problem with The Hunger Games: Catching Fire was that it essentially reheated the first film, not an uncommon complaint of sequels generally. The Hunger Games: Mockingjay – Part 1 remedies this but in so doing exposes a far greater ailment. Without the central, and unlikely, gimmick (as in, this world is not really any more plausible than that of the much derided Divergent) of this particular totalitarian regime, there is no glue holding the picture together. As a result, the entire edifice begins to crumble, and the makers are left clutching desperately at the life raft of propaganda commentary. Of course, cutting the book in half for strictly artistic reasons doesn’t help anyone to tell a compelling story either.

I haven’t read the Suzanne Collins’ novels, and I’m not particularly inspired to, and I’m not going to spoil if for myself by reading a synopsis. It’s quite possible that Mockingjay possesses a rousing, thoughtful and insightful conclusion that justifies all this extra time taken. I’m doubtful, though. Lionsgate (and Warner Bros too) are dab hands at milking bashful cash cows with finite literary lactose on tap. Lionsgate did it with Twilight, and Warner did it with Harry Potter. The end is nigh, and the decision to double up has zero to do with making a coherent or satisfying film. It’s not such a problem ending on a cliffhanger, it is a problem if the resulting story becomes aimless or listless. Breaking Dawn – Part 1 at least boasted the majestically warped horror show of Bella’s pregnancy to hold incredulous attention. And the Deathly Hallows: Part 1, for all its “Let’s camp out in the woods for an hour” rap was much more interesting than the banal big battle conclusion. I fear that is the kind of place Mockingjay – Part 2 is heading. If so, it can’t even claim a fitfully interesting lead-in.

We pick up with Katniss suffering PTS as a result of the climax of Catching Fire in which she lost Peeta (to the clutches of Donald Sutherland’s nefarious President Snow), the most mystifying point in a love triangle since… well Taylor Lautner. Josh Hutcherson can act to some degree, so he’s got that as an advantage over Lautner, but he has no chemistry with Lawrence and he’s an uphill battle (particularly so, given his height restrictions) trying to make a beta male character sympathetic when as a performer he lacks presence (and is unable to impress upon us Peeta’s intelligence, apparently the character’s strongest suit).

Considerably more might have been made of the position of the rebel leadership, that the captured Tributes are traitors, so it’s lobbing a soft ball to establish outright here that Peeta has done his very best while undergoing starvation and Manchurian Candidate-style brainwashing. Despite the gritty action and handheld camera, and the moves to show politics as a murky business no matter which side is talking, there’s never any doubt that our noble and true heroes are noble and true. It might have been more honest to have a central character break under torture, since that would be the response of most of us (the picture is also guilty of continually playing to stereotypes, which is why it attempts to cast doubt on the stalwartness of the not-so-manly Peeta). Peeta’s out of the loop for most of the movie, which serves to reinforce how unlikely Katniss’ affections are; she is overcome with emotion at every sight of paltry Peeta on the Capitol’s broadcast.

Nevertheless, she finds time in her busy weepy schedule to canoodle with manly beefcake, and brother of Thor, Gale. Liam Hemsworth isn’t quite as one-note as previously, since he has considerably more screen time, but Gale is in no danger of being unveiled as a layered character. The more we see and hear of him, volunteering for heroic suicide missions, saving as many townsfolk from a bombing run as he could and then berating himself for not saving more, the more immodestly noble he becomes. Gale’s judgemental traits (of Peeta’s betrayal, of Katniss’ emotional superficiality towards him) may be implicitly criticised, but Hemsworth is unlikely to dispel his rep as an impassive plank any time soon.

This isn’t such a great picture for J-Law either. Katniss is granted a bravura moment with a bow and arrow against some fighter planes (and director Francis Lawrence stages an outstanding piece of action as a chimney collapses, seen through the window of a derelict warehouse), but spends an awful lot of time blubbing, fretting, and being generally underwhelming. I’d go as far to say Lawrence comes unstuck here, buffeted by the demands of having her character doused in despair or subject to the demands of others. She is largely without the contrasting upsides; when she Katniss comes over all spontaneous, her recognised greatest strength, the dialogue and visuals are anything but.

There was surely a better path through this uncertain territory, but Peter Craig and Danny Strong haven’t found it. The ground is fertile enough; Katniss, who has been used and manipulated by Snow, now finds herself used and manipulated by the rebels. To the end that she must inspire all through becoming the symbol of the rebellion, she is done up in superhero duds (X-Men by way of Dark Knight) and sent out to scenes of devastation (a hospital, the scene of the aforementioned bombing). There’s almost a meta-quality to this, but not in a good way; President Coin (Julianne Moore, exuding steely perfection) and Plutarch Heavensbee (Philip Seymour Hoffman) mull over what to do to best get the message across and rouse the masses. So too, the writers mull what to do to find an involving storyline and stumble from one site of carnage to another. There’s no tension here, and the results are close to aimless.

Occasional moments are suggestive of the intelligence and perceptivity the picture clearly seeks. Replaying Katniss’ impromptu speech (which itself is astonishingly well-composed, and so entirely unbelievable, for something apparently off the cuff) to stirring music, or doing the same with footage of her fighter-jet take down, adds another level of reading to the one we have just watched. The speech feels even more rehearsed, while the heroic jet-busting now looks fake. There’s also a beautifully observed moment where we Coin gives a stirring speech and we cut to Plutarch in the audience, silently mouthing the words he has written for her. But what are we to make of the en-masse three-finger salutes and the instant anthem sung by Katniss; James Newton Howard’s score instructs the viewer to be as easily prodded into unquestioning reverence. There’s a sense that, whenever the picture is about to say or do something interesting, the trappings of juvenilia resurface and put it in its place.

I’m not sure accounts of real world embrace of the three-fingered salute in any way legitimise the picture as a genuine inspiration for overthrowing the status quo; rather, they emphasise that iconography is easily mimicked (the most obvious of these is V from V for Vendetta, another picture where impact comes from broad strokes rather than great depth) and that, where there is general apathy, something is better than nothing. I don’t see any reason its Young Adult status should give the picture an easy ride; it chooses to go there, after all. But perhaps Part 2 will surprise me, and I will reconsider Part 1 in a different light.

There are several new characters here, but most noticeable is how limited the impact of the old ones is. Hoffman steals the film in his every scene, suggesting an exemplar of craftiness and cunning; Plutarch should have written the whole movie. Harrelson, Banks, Tucci, Banks, all get a moment or two but not so they are memorable; its lip service, really. Claflin, who made a great impact on the previous picture, is reduced to an utterly indifferent presence. Malone gets one scene and is much missed. Robert Knepper, who can be counted on to eat any scenery in his eyeline, seems to get about two lines.

Jeffrey Wright manages to make an inauspicious character seem much more alive and intriguing than he actually is. One wonders if half the grand thesps here are doing it as a favour to their kids, or because, like Christmas panto, it’s an easy undemanding engagement that pays the bills. But this is a picture wasting a huge amount of time doing very little that’s engaging, so it really should be finding time for its most colourful characters (who, like the setting, are now drab and grey).

The exception is the introduction of Natalie Dormer as stylish and sexy media type Cressida, sporting tattoos on her half-shaved head and a hairstyle that must require a lot of adjustment for wind direction (her assistant is covered in piercings and ring pulls, so neither are best set for dirty-shooty-explodey conditions). Like Wright, Dormer has much greater impact than her part on paper suggests.

Following a gratuitous “save the cat” scene (even with its po-faced “This is important” face on, the makers still find time to respect grand movie clichés), the picture stumbles and plods to a non-climax of sorts. Boggs (House of Cards’ Mahershala Ali) leads a daring raid to extract the Tributes. Momentarily director Lawrence strikes two plot threads together and they catch fire, as Katniss attempts to distract Snow while the SWAT team get down to business. We are left wondering what has happened to them, but then learn the mission has been a success. This is despite the fact that the team are baffled. It was all too easy; no one stopped them from escaping.

So of course, rather than behaving cautiously (because, let’s face it, unless you’re the sloppiest bunch of rebels ever you’ll expect something rum to be afoot) they let Peeta get all strangle-happy on Katniss. It’s the weakest of twists, not just because it is telegraphed that something will go amiss (Snow has dropped such heavy hints, all but the most befuddled would get the gist; “… it’s the things we love most that destroy us”), but also because it is logically unsound. And ending on Peeta’s mental malaise isn’t the most must-see –what-happens-next of cliffhangers (I may be mistaken but I don’t think anyone much cares about the half-pint numpty).

Lionsgate may well muster a good showing for the finale, but it’s evident that a good proportion of the great unwashed have already got the message this isn’t all that. Which has happened before. The Matrix Revolutions recklessly forsook the very aspect that sparked imaginations and instead served up a hardware-packed extended battle scene. It was little wonder audiences didn’t care for the picture. An instalment of The Hunger Games didn’t necessarily need to flounder without a game (notably, both this and The Matrix announce the central attraction in their titles, so the studio cannot be too surprised if audiences end up feeling short-changed), but it really does need to have forward momentum, engaging ideas and sharp scenarios. The Hunger Games – Mockingjay Part 1 has sufficient ideas to play with, but it is unable or unwilling to develop them in the face of a severed storyline and a teen romance triangle that musters nary a shred of conviction. 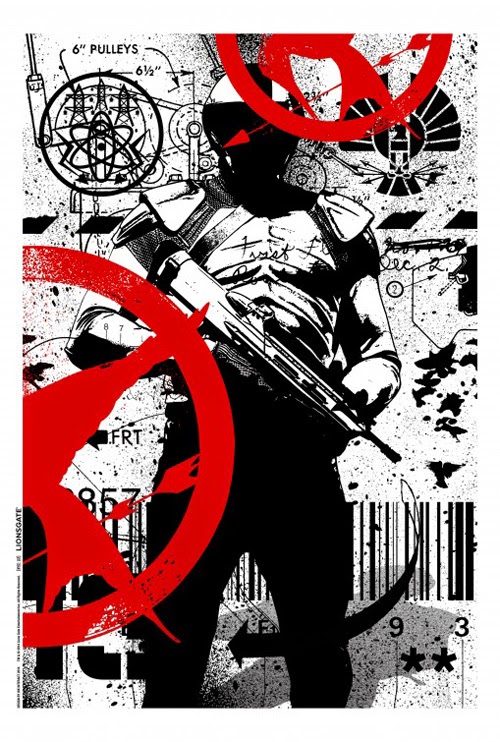