The truth is, we’re joined at the hip.

From its solemn, haughty title down to its sun-drenched period trappings, The Two Faces of January has the veneer of a classy, classical, immaculately poised thriller. Patricia Highsmith’s novels have held lustre ever since Hitchcock made Strangers on a Train, but such a flawless and rewarding interpretation of her work has since been consistently elusive. Certainly, it wasn’t to be found in the vastly overrated – and probably best known of her novels – The Talented Mr Ripley. January feels like a picture arriving pre-prepared to be lauded – the word “elegant” will likely preface any given review – and there are many things about it that do deserve praise. Unfortunately, the one thing that doesn’t is the story itself; the expectation of a tense, twisty journey gradually way to the realisation that this slightest of tales has few surprises on the way to a rather inevitable destination.

A recurring feature of Highsmith’s work is the presence of non-traditional protagonists; often these are flawed, amoral anti-heroes and her particular skill is to encourage the reader to identify with their unbecoming behaviour. January is no exception, revolving around the uneasy tensions between three Americans in Greece. One, tour guide Rydal (Oscar Isaac), has become a part of the landscape. Fluent in the language, he uses his edge to skim profits from those he intercedes for in deals (or even those who simply take him to dinner). We know he’s dodgy, if in a decidedly petty sense, from the first.

Less clearly motivated are well-presented couple Chester (Viggo Mortensen) and Colette McFarland (Kirsten Dunst). The trio catches each other’s attention and before long Rydal is showing them around and skimming off them. When it becomes clear that Chester’s dubious activities put Rydal’s nickel-and-dime antics in the shade, events conspire and the latter becomes the couple’s only-partially witting aide and accomplice. They head for Crete, where Chester and Colette are due to take delivery of fake passports. This time together fosters the development of a highly fraught love triangle as Rydal and Colette become attracted to each other. Meanwhile the outwardly composed Chester reveals himself to be increasingly uncontrolled and excessive as he responds to the perceived threat of Rydal and the danger of losing his much younger wife.

The first half of Hussein Amini’s directorial debut is slippery and elusive. The simmering tensions and glowering looks keep the viewer guessing just where this will go. Unfortunately, Amini has no aces up his sleeve and there is insufficient plot to sustain the unsympathetic characters on their unravelling way. Part of the problem is that Mortensen has – as he frequently does – chosen well, but his is the only one of the three with sufficient substance. Chester is cool and calculated, with an innate knack for self-preservation, except when his “better” instincts fail him. He has Rydal made from their first meeting (“I wouldn’t trust him to mow my lawn”), and is quite aware of Rydal taking his cut and having designs on his wife.

But Chester is no mastermind; his prior business affairs don’t sound as if he was engaging in an intentional scam (until he made off with the loot, that is) any more than killing the investigator was (he is clearly shocked by what he has done; taking life isn’t something he does every day). Chester continually performs blunders, unable to keep a calm head and turning to the bottle when his world is threatened, yet he demands attention as he still manages to outwit others in desperate situations. He becomes a rounded character through the sum total of his flaws. We’re even unsure if he’s acting the tourist until we see him getting lost and increasingly ruffled by his inability to master his surroundings. Mortensen makes Chester’s shading consistently dangerous and intriguing; when we hear him casually invite Rydal to “come and have a drink and we’ll talk about it” we’re instantly struck by how he used the same words with the investigator. We can see and hear his cunning at work, yet all that befalls him could have been prevented if he was more cautious and considered.

Rydal, through no fault of Isaac, is more obscure. Initially it appears as if he will be the focus, and that we will see the McFarlands through his eyes (one of the most appealing aspects of the screenplay is the realisation that we’re being introduced to the couple in the middle of something; this tale doesn’t start with their meeting with Rydal), but Amini switches allegiance to Chester. Much is made of how the two are similar, but the ambiguity encouraged by the writer-director distances any insight into Rydal (he resists showing Rydal and Colette in flagrante or even in a clinch, so their rapport relies heavily on Chester’s point of view and his imaginings of what they are getting up to; even when Rydal tells him they had sex it could as easily be designed to extract an angry confession, more likely even).  Such diffidence can work to an extent, but we need to be engaged by why he is doing what he is doing, intrigued by his motivations. We’re unsure how deeply he cares about Colette, uncertain if he has limits to his potential for criminal behaviour (“I know you wouldn’t be here if you didn’t have a little larceny in your veins” says Chester), unclear if his entrapment of Chester is purely a result of being forced to co-operate with the police or a genuine desire to bring Chester to book. And we end up not much caring.

Chester’s dying confession seems to come out of the blue; a man making amends why? It seems intended to connect the running themes of the doubling between the two conmen announced by the title. The Roman god Janus (a rather peculiar choice given there is no Greek equivalent), hence January, is the god of transitions and change, able to see into both the past and the future, but the bearing on Highsmith’s tale is really in the loosest sense. The two-faced god, two men with two faces each, one for everyone else and one for what is really lurking beneath. Rydal initially tells rich heiress Lauren (Daisy Bevan, daughter of the film’s producer Tim and Joely Richardson – so she has an acting dynasty’s blood in her veins) that Chester reminds him of his father, the father whose funeral he didn’t attend and whom he resents. We don’t know (like so much with Rydal) if this is merely a deflection because he really was eyeing up Colette, but it ties into Chester informing him how much alike they are and how one day he will realise how much like the elder swindler he is; Chester is the Janus who encounters his own past seeing into Rydal’s future.

The object of both their desires is also a little too remote. Dunst is strong, but her character has little to do other aside from reacting to the men around her; her role is too undercooked to sense that she has any real control or power over her men. It would be interesting to see the young trophy wife actually made something of in a film, but filmmakers often fall into the trap of making the part exactly what it appears to be. I’d like to say I was surprised by Colette’s exit, but the picture was already tending in that interior direction; with no clear external trajectory, its characters had to implode or suffocate each other.

This is one of those films where it’s difficult to put a finger on quite where, finally, it disappoints; January’s a slow burn character-driven affair that never quite clicks. There are several well-executed sequences during the second half (the confrontation in the ruins, the customs queue at the airport and subsequent fooling of Rydal, the street café meeting place, the final chase) but I was insufficiently engaged by these characters’ fates and, rather than spiralling ever more out of control, Amini settles on a more restrained touchdown.

Hussein Amini read January at university, and had wanted to make a film of it ever since. The intrinsic appeal eludes me, although I admit I’ve found Highsmith material very hit and miss as far as adaptations go (the Malkovich Ripley’s Game was a hit). It has the tone and range of a minor piece, which may be why it isn’t so well known. Some of Amini’s more fanciful allusions don’t bear much interrogation either, Theseus and the Minotaur in particular. Okay, there are a number of representations of labyrinths, and Rydal, like Theseus has lost his father, but the broader references to Ariadne (Colette) and the Minotaur (Chester) are vague enough to resist a coherent reading.

Amini’s screenwriting career has been mixed; Drive received much acclaim, but a substantial part of that arguably relates to what the director did with it. He was Oscar nominated for The Wings of the Dove, and his first few screenplays were adaptations. Next up is a Le Carré, but on January’s evidence I’m more impressed with the sure-footed classical style he brings as a director than his scripting talents. There’s an assuredness at work, a willingness to let the picture unfold in its own good time, and a keen awareness of the tensions and space between the characters.

The Two Faces of January is gorgeous to behold (courtesy of cinematographer Marcel Zyskind), and just for the travelogue value it’s worth experiencing. Unfortunately, the need to fall back on such a comment illustrates that it is also somehow lacking; the inner tensions between its trio are unable sustain the film for its entire length, and it’s left to peter out rather than end boldly or confidently. Nevertheless, I look forward to seeing Amini’s sophomore effort and I’m certain it will be every bit as elegant as this is. 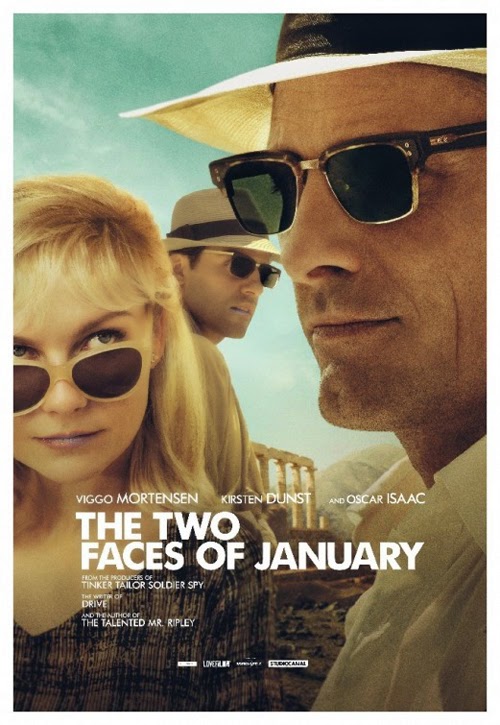