Is this the end of the world? Why would the gods let this happen?

Gladiator meets Titanic, and every bit as mechanically fashioned and empty-headed as the pitch sounds. You’d expect nothing better from Paul WS Anderson, a technically efficient but soulless director blessed with a determinedly mediocre career. I wouldn’t be surprised if he genuinely believed he was making something of emotional heft and tragic beauty, his chance to win credibility with a sword-and-sandals epic doubling as an almighty tearjerker. In volcano-busting 3D.

I didn’t watch the 3D version, I hasten to add, but the third act disaster movie trappings are clearly intended for those donning such spectacles; flaming molten chunks cascading hither and thither. This section manages to ape both Titanic (rescuing the girl while dodging the villain) and 2012 (outrunning earthquakes, but without the sense of humour). Anderson can put together an action sequence, and he also has a fair eye for integrated effects work, but as his filmography proves he’s never been able to make us care about his characters. This is his first love story, so the failing on this occasion is particularly glaring.

The screenplay is credited to Janet Scott and Lee Batchler (Batman Forever) and Michael Robert Johnson (one of five names on the first Downey Jr Sherlock Holmes) and I can only assume there were no conversations along the lines of “Perhaps we could come up with something better here?” Anderson begins with a quote from Pliny the Younger describing the disaster, which might wrongly suggest attempts at authenticity (Anderson alleges the all the volcano business is accurate geologically accurate… great balls of fire aside – which constitute an unerring threat).

That’s as good as it gets, since everyone here is wretchedly modern in sensibility; not least heroine Cassia (Emily Browning), a headstrong young woman seemingly oblivious to Roman customs and etiquette. But then, she has utterly doting parents (Carrie Anne Moss, perpetually under-used, and Jared Harris; both add a bit of class to the proceedings) who wouldn’t even think of such a backward custom as arranging a marriage for her. She’s like Kate Winslet in Titanic, you see, rebelling against the codes of her time as if granted foreknowledge from the gaudy heights of 21st century California. Accordingly, the makers appear to have done their research by watching Roman epics from the ‘50s.

Her parents live in Pompeii, and daddy is attempting to get funding for a new amphitheatre from Keifer Sutherland’s Senator Corvus. Corvus is a thoroughly rotten rotter; he not only has designs on Cassia, but he killed the parents of poor pouting Milo (Kit Harington) when he was but a wee lamb. Milo subsequently entered slavery only to emerge a positively ripped, twenty-something, kick-ass gladiator (so… slavery’s good for your health regimen?) Most curiously, he’s also a peerless horse whisperer. One wonders where he got the time for such sensitivity amid the arterial spray of bested opponents. Ah, I know; he comes from a tribe of Celtic horsemen, which means it must be in his genes! It also shows he’s a deep and wistful soul, so when he first encounters Cassia she has no choice but to fall for his animal-loving humanity (“Stop! Let him help the horse”; which he does by snapping it’s neck, I have no idea quite how strong you’d need to be to do that – Hulk or possibly Wolverine could manage it – but it seems Milo’s more than got the goods).

This is just the first of numerous unintentionally funny moments throughout, including Milo’s Inigo Montaya revenge fetish and his displays of quite astonishing stoicism (“Fifteen lashes and he didn’t make a sound”). At least Keifer, relishing the chance to play a bad guy, and taking a stab at something approximating his father’s flair for ghoulish refinement, seems to get the joke (one that clearly didn’t dawn on Anderson). During the centre piece gladiatorial, a re-enactment of Corvus’ victory over the Celts is staged by Harris’ Severus. Unfortunately, no one counted on the estimable fighting skills of Milo and pal Atticus (Adele Akinnuoye-Agbaje), and the “Romans” are thoroughly trounced. Turning to his host, Corvus comments “Severus, this is not exactly how I remembered it”. He also makes a point of Alan Rickman-ing excessive orders, with an ever-more frustrated demand to “Kill them! Kill them all!”

Anderson is best known for making one half decent movie with Event Horizon, ruining what was commonly held to be a great script for Soldier, killing any last shreds of respect the Alien series had with Alien vs. Predator and inflicting three of the five Resident Evils on the world (he wrote all five; the script for Pompeii is so perfunctory I thought he must have pitched in, but it seems not).  Where he does exhibit a degree of slick competence is in staging action but, like (for example) Len Wiseman, this has little impact because his pictures are so bland and faceless. The introduction to adult Milo sees him kill a series of arena antagonists in slow motion without pausing to adjust his leather skirt; Harington, with ne’er a hair out of place and an expression that’s more sullen than moody, looks like he’s filming a shampoo advert (just look at the post below for the effects of a bracing lava shower on one’s perm). It’s no more than you’d expect from the director; he sees Harington playing an affecting and sympathetic character in Game of Thrones, thinks I’ll have some of that guy, but forgets to include any of the ingredients that would allow him to be relatable.

Still, the brutal arena games include some creative moments, the re-enactment chief among them. I’m unconvinced that Milo could do all the amazing things he does without tying his chain in knots, but I’ll let that pass. Less successful is Anderson’s penchant for having his young hero leap upon his adversaries from a great height at any opportunity. When it comes to the all-important eruption, there’s a lot of dashing about and increasingly absurd delays of the inevitable. There are duels aplenty amid the ash and devastation, including a fight to the death in the rubble of the arena (Sasha Roiz enjoys being a bastardly Roman almost as much as Sutherland) and a chariot race through the exploding streets. Atticus even saves a child at one point, who will doubtless die minutes later anyway. But it’s the thought that counts.

Harington and Browning may die in an everlasting clinch, but it only makes dramatic sense to off your protagonists if you care about them. For all the significant failings of his last two movies, James Cameron was able to make audiences care about his love stories. It’s not even necessarily the case that Anderson sets up something cruder than Jimbo. Rather, the latter knows how to fashion the rudiments of character (and they only ever are rudiments). Here, the love story amounts to naught and it’s the readiest explanation of why Pompeii was an expensive bomb ($108m gross worldwide on a $100m budget). It’s so non-descript, so unassumingly derivative, there’s barely a conversation to be had here. Never mind, Resident Evil 6 is just around the corner.

Addendum 29/06/22: While ostensibly taking place in 79 AD, this date is, of course, even more suspect than anything we see in Paul’s epic; 1700 would be closer to the mark. 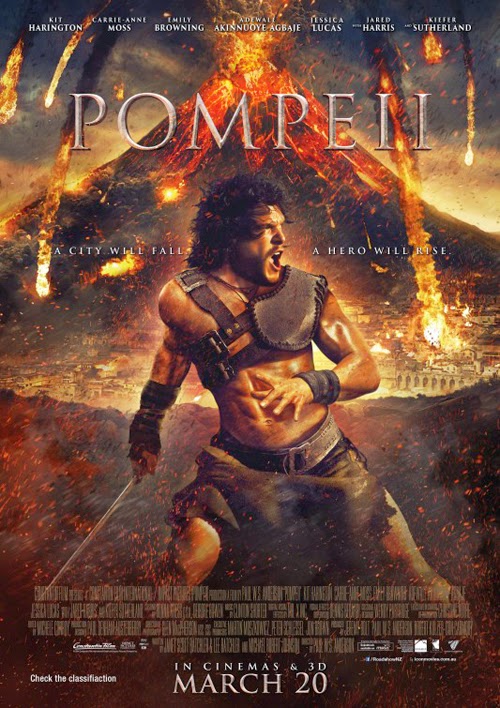