Mate, I better get off the blower. The cabby’s about to throw a wobbly.

In which Nicolas Cage’s latest wig is unleashed on New Orleans. His syrup is certainly put through its paces this time, as our Nic has to do quite a lot of pegging it hither and thither. His daughter’s been stolen, you see, and he wants her back. Stolen by an ex-partner in crime (revealing that his ex-partner is not dead is not really a spoiler, as this fact is only a secret for about two minutes of screen time) with whom Nic stole $10m, and which Nic promptly caused to vanish (nothing as sleight of hand as Now You See Me, which is a small mercy), so leaving ex-partner a tad disgruntled. Thus, the title is highly descriptive and appropriate. It also sits comfortably with other succinctly named recent Cage (pretty much) straight-to-DVD fare like Trespass and Justice (the latter also set in Cage’s favourite city). Neither of those were particularly smart thrillers, but sat next to Stolen they take on hitherto unrecognised qualities. This is a particularly dumb movie, and it doesn’t even have the benefit of a crazy Cage performance to see it through. Lots of running, though, so requiring a firmly glued rug.

The first twenty minutes are reasonable, setting the scene for the main event.  A bank robbery goes wrong thanks to the dogged pursuit of Danny Huston’s FBI guy, and Cage’s Will Montgomery is banged up for the next eight years. The rest of the gang escape justice (including the sweetly pretty Malin Akermen and Lost’s not-at-all becoming M.C. Gainey), but Will is compelled to put a bullet in unhinged cohort Vincent’s leg. Vincent (Josh Lucas) has been Will’s accomplice for years, but it’s only now that it becomes obvious he’s a complete psycho? So Will has both the police and (the apparently dead) Vincent on his trail when he is released, after the disappearing loot.

David Guggenheim, writer of Safe House (which moved fast enough not to notice the script problems, I guess) wrote this sub-Ransom crap, which doesn’t have an ounce of logic or coherence. The sign of a good robbery/heist movie is how intricate, well-conceived and staged the big steals are (take Heat, for example). Guggenheim has lifted a couple of ideas, but seemingly couldn’t be bothered to think them through. So there’s the old “it looks like the Feds are going to bust in on our protagonists but actually they’ve the wrong building” visual gag, but the geography and staging are so muddled it fails to carry as a “clever” twist. Likewise, Montgomery stealing a store of gold is… well, I see no reason to spoil it but it’s utterly absurd.

If director Simon West had approached Stolen with the tongue-in-cheek excess that washed over his previous collaboration with Cage, Con Air, this might just have worked. But truth be told, West did his level best to murder a witty script in that case and little he has done since show’s any indication of mastery of his chosen field. He’s perhaps a more coherent action director now, but it’s telling that he has found his niche directing B-movies with the Stat (The Mechanic remake might actually be the best thing he’s done in a decade, although that’s not saying much). I’m frankly stunned that, following his next Stat vehicle (a remake of an ’80s William Goldman script that starred Burt Reynolds) he is making Tolkien & Lewis. This sounds tantamount to Roland Emmerich directing Anonymous (although that picture is actually quite good fun). Will the two authors have bare-chested fisticuffs in a forest at some point? Or try to stab each other in the eyes with fountain pens?

Mainly, though, it becomes about Lucas’ deranged performance. Somewhere along the road he lost any chance of making it as a leading man, probably around the time of Hulk. It’s that inherent shiftiness, most likely. It must chafe a bit that similarly cold-eyed killer type Jason Clarke is getting starring roles. Lucas knows that the only way to approach his one-legged, crazy-brained nutjob is to go bigger and bigger with each scene. And he is quite entertaining; God knows, the picture needs distractions. Which means, when he kicks the living shit out of annoying Aussie tourist, we’re almost on side with him. The climax, at a disused fairground, is the stuff of ’80s Dolph Lundgren movies, as a waterlogged Lucas and Cage duke it out and the former, having been set alight and hit by a car, resorts to his best Creature from the Black Lagoon impression. Grarrr!

It’s all alright, however. Inevitably, this peril teaches Will’s daughter how much daddy means to her – shouldn’t it be the other way round, reconfirming what a monumental ass he is? – and sad-eyed Nic gets to play one last jape on the not-so-bad-really FBI guys. Lucas and an aggressively cheesy Mark Isham score aside, there isn’t enough to make this a so-bad-it’s-good latter-day Cage & the Tax Man effort; Trespass is much more fun in that regard. The poster is absolutely appalling too (below). This is the thing; I’m a (increasingly rare) fan of Cage’s but if he’s going to appear in consistent rubbish in order to pay the bills he could at least give us the satisfaction of deranged performances to make up for it. When he first started with his action hero reinvention he brought the same spark to them as he did his “serious” roles. Lately the only distinguishing feature of his performances has been his postiche rental. 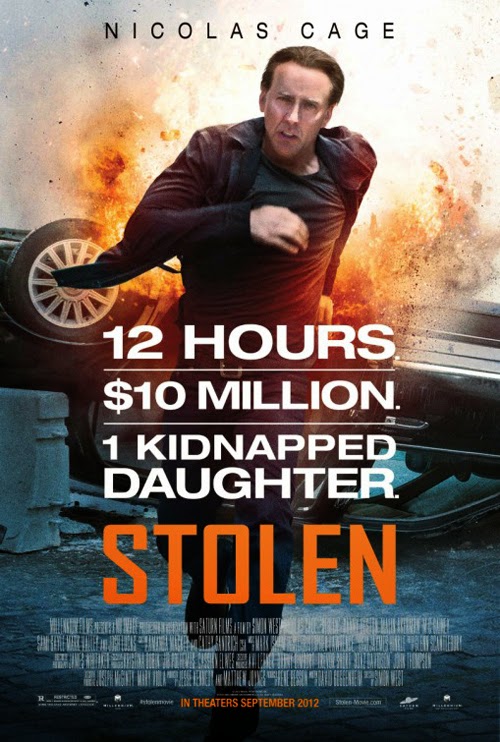 That was worth the two minutes in photoshop, now wasn’t it?