I wasn’t broken. I was sad.

The Machine is an impressive Hollywood calling card from writer-director Caradog W James, but only in respect of the latter skillset. There’s little original in his well-worn script concerning an AI created by everybody’s favourite Bond villain Toby Stephens. Actually, James also steals a whole lot in terms of visuals. But this is a stylishly put together futuristic thriller, making the most of its low budget. So much so, it’s easy to give the scrappy plotting and rote characterisation a pass, until the thought crosses your mind that James may genuinely think he’s saying something profound or significant.

He isn’t. This is economical B-movie making to an appreciably high standard but sadly, and predictably, rather than using the opportunity to explore its familiar but still resonant themes James chooses to cut to the chase. Did he chop The Machine down to 90 minutes from a more extensive storyline, or is the conceit of a Cold War with China (announced on the opening subtitles) less an announcement of a thought-through world than a glib homage to post-Escape from New York dystopias? Probably the latter, but while much of the movie consciously recalls ‘80s movie filmmaking, it’s crucially absent the sense of humour and irreverence that marked out the likes of Trancers; cheerful knock-offs of the big blockbusters. James is clearly using Blade Runner as a yardstick in his visuals, along with a host of other Hollywood visualists from Lucas to Cameron, although the machine consciousness angle is more inspired by other AI movies (2001, even Robocop). Crucially, a being’s discovery of self-awareness isn’t interrogated in Ridley Scott’s classic; it’s all after the fact (Rachel is self-aware, she just isn’t aware she’s a replicant). The main hat doffing to Blade Runner here comes with the Turing Test, or Voight-Kampff for short, and references to Skin Jobs.

Stephens, a very English British actor who never seems quite able to disentangle himself from natural starch, is scientist Vincent, employed by the Ministry of Defence to develop an android for military purposes. He has been testing his work on damaged veterans, some amputees, others severely brain damaged.  Many of these individuals guard the research facility, possessing implants that render them mute aside from incomprehensible (to others) interactions with each other. Vincent is driven by the desire to find a treatment for his afflicted daughter, and when Ava (Caity Lotz) joins the project it looks as if a breakthrough will be possible. But Thomson (Dennis Lawson), the commander of the base, is ruthless in pursuing the goal of a weaponised machine and will not let anything as flimsy as ethics stand in his way.

James’ movie is big on atmosphere but short on depth. He starts things off effectively, with as mentioned, a scene that mimics Blade Runner as a newly implanted soldier fails to show he is sufficiently human and takes to Vincent and his assistant with a scalpel. The cinematography of Nicolai Bruel here, and throughout, is a major boon to James, even if he rather overdoes the lighting rigs and lens flares in order to divert attention from the threadbare sets (it appears that they filmed on a disused industrial site).  Much of this will seem familiar, from the glowing eyes of the implantees to their Ben Burtt-esque verbal communications (actually Farsi). The physical effects, also aided by lighting, are mostly impressive; prosthetic arms and android endoskeletons. The synth score too, from Tom Raybould, adds enormously to the mood.

But the characters are a clutch of clichés. Vincent is the single-minded yet sympathetic scientist (he needs the daughter sub-plot to make him sufficiently relatable). Thomson is utterly loathsome, doing thoroughly nasty things just because he can. Lotz barely gets a look in as Ava, but she gives a good performance as the sexy android version. Like most of the content here, it isn’t what’s on the page so much as the realisation that makes it worth a look. Lotz conveys the android’s growing awareness and childlike innocence well, but the devices used are predictable (a fear of clowns, her manipulation by Thomson; “That man killed your mother”). The AI’s suggestion that an android could be used to infiltrate and assassinate the Chinese leader is remarked upon by Thomson as a good idea but surely that would be one of the first things he’d have considered? And just what did he expect Vincent to be working on, such that as soon as the project is successful he wants the results curtailed (“Conscious machines are the last thing we need. Have you any idea how dangerous that would be?… The technologically advance tribe always wins”).

Besides the AI aspect, there’s a touch of Splice to the creature that falls for her creator, but James doesn’t is only skin-deep in his exploration of his Skin Job. A physical relationship is presumably not feasible, and the plot quickly settles on a base-wide revolt for its action-focused third act. Which is decently realised, but underlines that this is not the most thoughtful of movies. It serves to render the would-be provocative last scene, in which the downloaded consciousness of Vincent’s now deceased daughter would rather interact with her new “mother” than her old father, flat. So what? And all the portentous talk of the machines being part of the “new world” lacks a crumb of achievability. An android and a motley assortment of cyborgs are somehow going to inherit the Earth? How? Perhaps in a nebulous sense, over the course of centuries.

In the best of both worlds this would be smart and flashy, but we just have to make do with flashy. The Machine momentarily puts its brain first whenever its director wheels out the Turing Test, but he can’t sustain that edge. Still, if James can produce this kind of ’80s-future chic with less than £1m, it will be more than worthwhile investigating what he is capable of when equipped with a decent budget and someone else’s script. 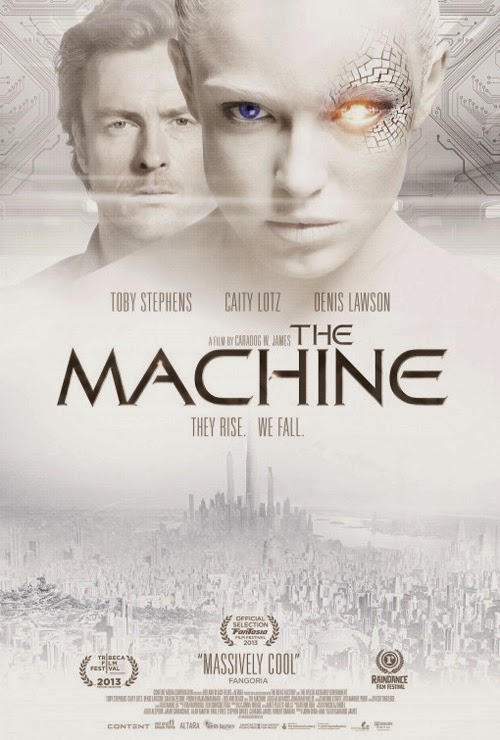