We’re going to find that creature they call the Yeti.

The Abominable Snowman follows the first two Quatermass serials as the third Hammer adaptation of a Nigel Kneale BBC work. As with those films, Val Guest takes the directorial reins, to mixed results. Hammer staple Peter Cushing repeats his role from The Creature (the title of the original teleplay). The result is worthy in sentiment but unexceptional in dramatic heft. Guest fails to balance Kneale’s idea of essentially sympathetic creatures with the disintegration of the group bent on finding them.

Nevertheless, Kneale’s premise still stands out. The idea that the Yeti is an essentially shy, peaceful, cryptozoological beastie is now commonplace, but Kneale adds a further twist by suggesting that they are a distinct and, in some respects, more advance parallel branch in the evolution of hominids (the more extravagant notion that they are in some way extra-dimensional is absent, but with the powers thy sport here wouldn’t be such a leap). Cushing’s Rollason is the thoughtful explorer with genuine intentions towards expansion of knowledge. In stark contrast, Forrest Tucker’s mercenary, the ironically named Tom Friend, is only in it for the money. He’s on an all-too-plausible mission to put the creature on TV. Stanley Baker played the role in the TV version, so the recasting with an American (Hammer had foreign sales in mind) has the effect of shifting the emphasis. Britain becomes the considered preserver, not really a representation of unmartialled imperialism at all, while our American cousins assume the mantle of all that is dark and destructive in man.

Guest was a hit-and-miss director; The Day the Earth Caught Fire is a sweaty, claustrophobic envisioning of an imminent apocalypse. But Snowman, in spite of a second unit shoot in the French Pyrenees, is unimaginatively rendered and wears its mostly set bound environment on its sleeve (not that the sets aren’t decent). Guest reportedly didn’t take to the anamorphic wide screen format, which may help to explain why the proceedings are shorn of an epic or expansive scope. He also fails to imbue much atmosphere, despite Kneale setting up a number of eerie scenarios.

Indeed, while one could argue that the film fails because the monster isn’t monstrous, the real issue is the director’s lack of connection with the material. There’s ample opportunity for unsettling or uncanny, but Guest obliges with relentlessly stagey compositions. The use of handheld camera adds little frisson to the static compositions, and the experiment with overlapping dialogue ends up sounding like fluffs, rather than planning. Since he also reportedly did his own rewrite, he might take the blame for some of the clumsier exchanges. Guest’s approach of cutting away the dialogue in order to advance the action comes unstuck because Kneale’s structure hinges on the clashing philosophies behind the events.

Rollanson: You’re nothing but a cheap fairground trickster!

Unlike Cushing, Tucker makes little of his character, delivering a stereotypically gruff and boorish Yank. Kneale added a wife for Rollanson (at Cushing’s suggestion) but Maureen Connell is unable make her more than a dreadful nag. Much better is Richard Wattis as Rollanson’s colleague Fox. Wattis plays Wattis of course, as he always does; a slightly effete and snobbish Englishman, here disdaining this “infernal country”.  His list of complaints includes the cold, the smells, the superstition, the misery, the ignorance and the “awful, awful cold Tibetan tea”. Amusingly, he will only admit to this in the presence of his own countrymen (and women). When one of Friend’s group proposes similar sentiments, Fox disagrees and testifies as to the delights of Tibetan hospitality.

Kneale draws on recognisable beliefs, myths and legends to envisage his tale. If some of the lines are a little on the clumsy side (“That’s what they call it, isn’t it? The Abominable Snowman”, one of the Friend’s party “could eat a yak!”), he shows canniness in the way he weaves hoaxes into the mix. Friend has already perpetrated one such (wolf children; following the discovery of this deceit he changed his name). When Friend captures a Himalayan monkey, he’s more than willing to claim it as a genuine find (although this makes him out to be not all that smart; firstly, that he’d fall for mercenary guide Kusang’s story, and secondly that he thinks anyone might believe a monkey was a Yeti). Fox purveys a similarly western cynicism when he proclaims Tibetan beliefs as “sham magic”.

But such cynicism allows Kneale to flip supernatural notions as surprising truths. Couched in the scientific theorising of Rollanson, they take on an air legitimacy rather than superstitious nonsense. Kneale would soon take a similar tack with Quatermass and the Pit, although in that case the local superstitious nonsense (little devils at Hobb’s End) is replaced by modern superstitious nonsense (space beings in a centuries-old crashed ship). Rollanson suggests a subspecies that evolved in parallel with mankind, a third line of descent, one that developed abilities all of its own.

Kneale implies that the Tibetan Buddhists have developed a not dissimilar awareness (his take on the religion is generally respectful). The lama (Arnold Marle), given to cryptic yet sage advice as all such exotic gurus are, comments of the clime “There is time for an awareness of many things. Have you not found it so?” He knows Friend is coming before he arrives, and through experience or innate understanding warns Rollanson precisely what he will encounter up on the mountain.

Lama: Remember that you act in the name of mankind, and act humbly. For man is close to forfeiting his right to rule the world. He faces destruction by his own hand.

The lama implies that the meek (Yeti) may inherit the Earth, and a later discussion between Friend and Rollanson reiterates this. The latter also speculates the creature might once have ruled it “but something went wrong”. Yet Rollanson’s theories may be somewhat naïve; he rebukes Friend’s aggressiveness by telling him “These people are Buddhists. They don’t believe in war”. To his eyes, the face of the slain Yeti betrays sadness “and wisdom”. But these venerable ones are not above defending themselves or employing manipulation, even if only indirectly.

The lama pointedly lies to Helen when she tells him she saw the guide return to the monastery (“It was not Kusang”). (Kusang is played by Wolfe Morris, who would later to appear in Doctor Who’s Tibet-set – well, Wales-set – The Abominable Snowmen.) The Yeti turn the intruders against themselves. One falls to his death (McNee’s unfortunate dummy loses a leg as it hits the ground), another has a heart attack, and a third succumbs to a self-initiated avalanche. Kusang appears to understand this inherent danger when he claims that he was made to see what man is not supposed to see. It seems that they protect their domain indiscriminately. McNee (Michael Brill) means them no harm, impelled to seek them out like a moth to the flame (“as if he were hypersensitive to their presence”) but he receives no mercy for his innocent obsession.

Rollanson: I’m afraid I was wrong. What I was looking for doesn’t exist.
Lama: Are you certain of that?
Rollanson: Yes. There is no Yeti.

It comes as a slight surprise then, since they didn’t spare McNee, that the hairy fellows let Rollanson off the hook (in one of the few striking images, Helen finds her hubby standing on a mountain ledge apparently frozen to the spot). Earlier, he hears aural hallucinations of a radio message (which might have spelt his doom if he had responded). I’ve seen it suggested that the Yeti use the same psychic abilities they inflicted on Friend and his men to remove all memory of the encounter, but that wasn’t my take. Rollanson now understands what lies behind the lama’s claim that there is no such creature as the Yeti, realising that its preservation from the attentions of humankind is paramount (I took it that in the final encounter they perceived he meant no harm and would not spread the word.)

When Rollanson exclaims, “This isn’t the face of a savage” he’s not wrong. The creature looks like a cross between Jon Pertwee on a bad hair day and Catweazle. One of the few wise choices Guest makes is keeping it out of sight until the final minutes (a hairy gloved hand aside). Kneale favoured our seeing the Yeti throughout, to emphasise their peaceful nature. Presumably that was before he’d seen the design work. Whether it’s intended or not, the benign qualities of the creature end up more ambiguous on screen; in their own combatively clairvoyant way you couldn’t quite call them pacifists. I find that more interesting though; they aren’t just soppy dodos (not that I don’t like soppy dodos) waiting to be culled.

If The Abominable Snowman ends up rather staid, it’s still a welcome curiosity in the Hammer canon. Cushing is as splendidly watchable as ever, and the distinctiveness of Kneale’s idea survives Guest’s workmanlike treatment. It’s easy to see why the reborn Hammer is remaking the property. There’s much mileage in amping up the hallucinations and traumas of the blighted expedition; it would certainly be an elementary and silly mistake to re-envisage the creature in a more monstrous light (or pull some obvious riffs on The Thing), since the theme of man being his own worst enemy is as compelling as ever. 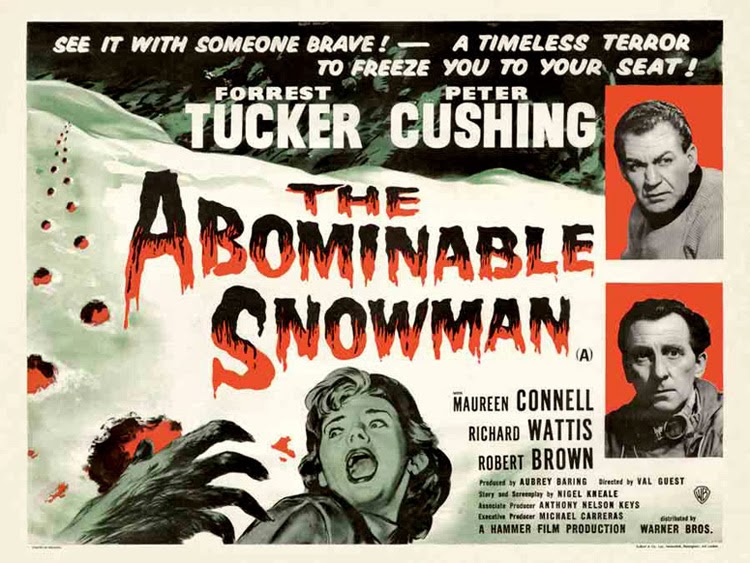