It’s difficult not to speculate inside the circle.

The reputation of Children of the Stones, as both “the scariest kids’ TV series ever” and “The Wicker Man for children” is almost entirely earned. It sits in the post-Nigel Kneale landscape where science and the ancient supernatural entwine, a captivating cocktail that flourished in the 1970s, post-von Daniken, fascination with ancient astronauts and hidden history. There is still a will to that kind of storytelling (look at Lost), but it is tempered compared to the post-hippy embrace of all things pagan. At the time Children of the Stones was made cynicism of Flower Power had taken hold, but there remains a flight to the imagination that informs it; in later decades this kind of storytelling would be one step removed, hiding behind a self-referential gauze as protection from open mockery.

Kneale would offer his take on ancient sites a few years later with The Quatermass Conclusion. He opted for Stonehenge, while Jeremy Burnham and Trevor Ray plumped for Avebury (so, Britain’s second best known ancient site but one iconically more open to resculpting). A couple of years later Doctor Who’s The Stones of Blood drew on pagan legends and tied them to a tale of hyperspace prison ships. The less lugubrious Rollright Stones would provide the location for this adventure.

The creators of the Children of the Stones had previously been involved in fantasy-tinged TV, The Avengers and Doctor Who respectively. And director Peter Graham Scott had also helmed episodes of The Avengers. He worked on McGoohan’s Danger Man before directing another iconic UK landmark, Portmeirion, for an episode of The Prisoner (The General). Graham Scott devised and helmed another kids’ series, Into the Labyrinth, in the early ’80s.

It is perhaps this pedigree that ensured that the series transcends the limits of afternoon kids’ TV; Graham Scott was surprised it had been intended for such an audience, based on its tone and complexity. The serial doesn’t talk down to its audience. Indeed, the relationship between Adam (Gareth Thomas) and Matthew Brake (Peter Demin), father and son, is on an equal intellectual footing. Ironically, this brainy young tyke aspect is one of the areas that betray its intended age group.

The first, most striking aspect of the series is the title sequence. Ominous chanting choirs (courtesy of Sidney Sager), as if performing an occult rite, are heard, as a hand-held camera roves around the titular stones. It’s as unsettling as the discordant introductory sequence of another ostensibly children’s series, The Owl Service, made seven years earlier. The serial was made in the balmiest of English summers, 1976. While it doesn’t have the sun beaten, parched quality anyone who experienced it will remember, the effect is redolently 1970s from the fashions to the pre-naturalist performances of its actors.

Gareth Thomas imbues most of his roles with a certain starchy, some would say wooden, quality. While he’s the lead adult, he’s also more often than not the straight man, which fits his general style. Why his son sounds like he’s auditioning for cockernee of the year is a different matter. Didn’t he bring him up to speak proper? It’s not as if Matthew can claim a subsistence diet of Grange Hill, since it didn’t begin until the following year. Demin isn’t a great child actor by any means, but he isn’t a disaster either.

Graham Scott isn’t interested in creating an overly stylised setting, like that other one set in a village (The Prisoner); this plays like a typical ’70s TV drama in terms of studio staginess (at times the reactions and editing are on the perfunctory side), except when it’s time to bring on the weirdness. Which we get from the start. Matthew sees a huge stone in the road, which then turns into a woman. Later he sees a truck coming straight towards him, which is then suddenly no longer there. There’s no ready explanation for any of this, which is either a sign of confidence in a mystery to be understood over the full span of time, or an indication of random strangeness that will never gain coherence.

What is impressive about this opener is how uncompromising it is in terms of piling on the information. There isn’t much leeway if you aren’t paying attention. The facts about the stones, which Adam has arrived to study on a university grant, are poured on in a torrent of what Tom Baker would call bafflegab. There’s enough confidence in sound of the science that the accompanying mysticism feints plausibility. We learn that the stones are older than Stonehenge, and encircle the village. In addition, each of the 53 stones is a source of great magnetic power.

While Adam is established as the unblinking man of science, he shows a remarkable facility for non-linear deduction as the episodes progress. Initially he is Scully to Margaret’s (Veronica Strong) Mulder (Adam’s wife died two years earlier, so the path is clear for a precautionary love interest). The story quickly embeds a sense of fated paths and uncontrolled destinies. Our protagonists are guided by indecipherable synchronicities. Most evident is the painting that Matthew found in a junkshop. Matthew saw it “and knew he had to have it”. Immediately there is a sense that it is this, rather than a university grant, that dictated their presence in Milbury.

Mrs Crabtree: So you’ve come to measure our stones?

The picture shows a stream of light from the heavens focussed on the stone circle, with a throng around it while several figures flee up a hill. And a snake. There is a sense of the bacchanalian but also of something from Close Encounters of the Third Kind (also 1977). When housekeeper Mrs Crabtree (Ruth Dunning) sees it, she collapses. Which elicits a very dry line from Adam.

Adam: I imagine that was just the effect the artist was after.

It’s at this point that Rafael Hendrick enters the scene, played by the tremendously fruity Iain Cuthbertson. Cuthbertson is my favourite sort of villain; charm personified, such that it’s impossible not to like the fellow. And again, the plot doesn’t let up for pleasantries as conversation revolves around the picture. His critique of the style (“It’s very raw, powerful”) is secondary to the translation of a script on it.

Hendrick: “I deny the existence of that which exists.” A remarkably futile statement, don’t you think? Like refusing to believe that which one knows to be true.

Cryptic remarks fuel the discussion between Hendrick and Adam (“Perhaps the picture came across him”, “It’s difficult not to speculate inside the circle”). Then there’s the suggestion that Hendrick knows Adam will be staying beyond his study; even Number Six knew he was trapped. The “Happy days” greeting echoes “Be seeing you” in The Prisoner; an artificial, automatic groupthink statement, with the subtext of a society that cannot think for itself, it represents sheep obediently instructed by their shepherd.

Hendrick: I read your paper on megalithic lunar observatories. I was very impressed.

And the characters that are initially set up as odd or mysterious (Sandra – the very posh Katherine Levy – whom we learn is Margaret’s daughter, and Dai – Freddie Jones – who has the worrisome predilection for spying on kids through a telescope) turn out to be wholly benign. Indeed, as soon as Adam meets Margaret, and Matthew arrives at school, it becomes evident that the “normal” people are few and far between. The paranoia of difference had been well trodden over the preceding decades: the pod people of Invasion of the Body Snatchers, the uncanny children of Village of the Damned, the robotic women of The Stepford Wives). Here, the loss of will and emotional variance is depicted as the death of the soul. Bob (Ian Donnelly) is the first to talk to Matthew, but it becomes obvious that he’s unusual; or rather, that the average non-savant children are the odd-ones out.

Matthew: She says funny things.
Bob: That’s because she’s not a happy one.
Matthew: What’s a happy one?
Bob: Someone who’s happy, of course.

Margaret, who works at the local museum and is as much of a boffin in her own field as Adam, tells him “We need new people here”, but at this stage there’s no real sense of claustrophobic threat to the events. It could all be put down to the classic “You’re not from round these parts” rural village.

You can add Ray Bradbury to the list of possible influences. The enchanted town has a whiff of Something Wicked This Way Comes. The sense that all this might be planned is accentuated by the mirroring of Margaret and Adam (and their children). Any given phrase takes on added resonance, such as the toast “Old times, and new”.

Matthew is thrown into a strange environment at school, whereby a classmate attempts “to find out if he was human” by taking out his leg. It appears that everyone else knows what the score is but “He doesn’t know the difference”. Later Bob informs Kevin that he has been dropped from the football team (even though he scored) because “You argue with decisions. That’s no way to be happy”. When Kevin thumps him in response, Kevin does not react emotionally.  His “See, didn’t solve anything did it?” is surely intended as a slight; he’s not a normal kid because he doesn’t start scrapping. But even if it is supposed to be creepy and weird, it’s also a revelatory moment; the ostensibly bullied kid shows himself to be morally superior.

The discussion that takes up much of the rest of the episode is both rather dry, in setting out the facts, and irresistibly offbeat. Adam may blanche at the idea of there being substance to the alleged properties of ley lines, but for a pronounced sceptic he is admirably willing to speculate.

Margaret: I take it you’re not a believer.
Adam: I’m a scientist. Scientists need proof.

But the writers manage to make Margaret seem slightly dizzy by emphasising Adam’s quick deductions; are we really supposed to believe that she hadn’t realised the number of ley lines (53) matched the number of remaining standing stones?

The backstory is practical (they weigh forty tonnes each), geographical (there used to be two avenues extending from the stones, one terminating in east and a barrow known as the Serpent’s Head; the one to the south west no longer exists) and mystical (they represent avenues from the head and tail of the solar serpent, the symbol of inner truth). We also hear of the once peculiar tradition of burying a stone each year for luck, during which someone had been caught and crushed beneath one of the stones.

Margaret: I don’t enjoy – being alone.
Adam: Do you mean the happy day natives are unfriendly?
Margaret: I mean, I’m glad you’re here.

If Matthew’s end-of-episode encounter is less than compelling (Dodgy McDodgy leaps out in front of his bike), Adam’s is much more effective.

Margaret: Touch one of the stones. I just want to see if you’re the kind of man I think you are.

When Adam touches the stone, he sees a vision of the kids and other villages, a blue tinted image of them screaming and rapt before the stones. And then he is thrown backwards. This is an effective opener; however dated aspects of the serial seem now, the storytelling remains first rate. 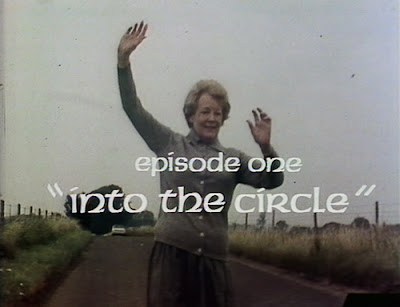 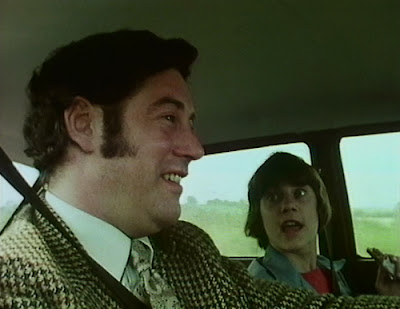 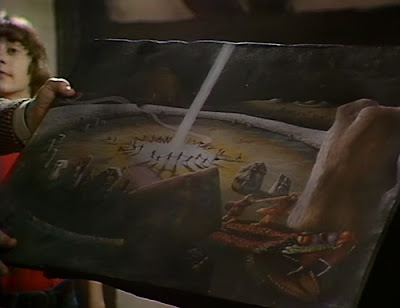 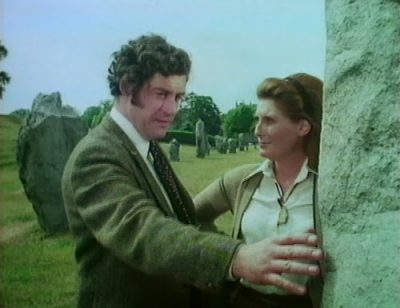 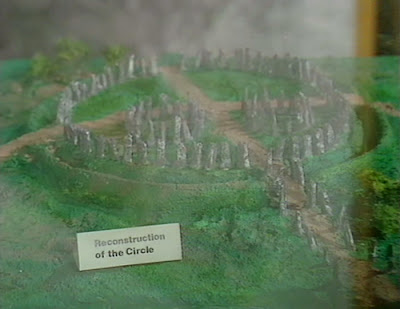 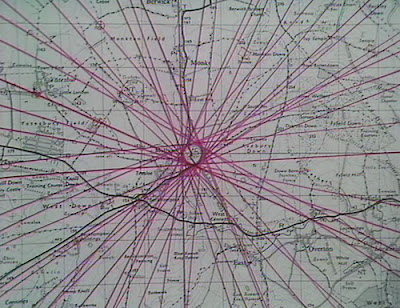 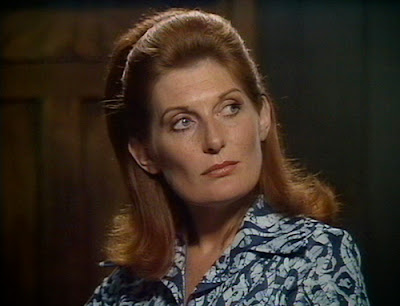 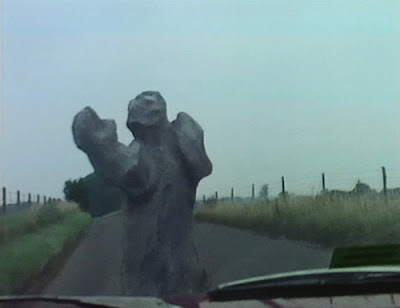 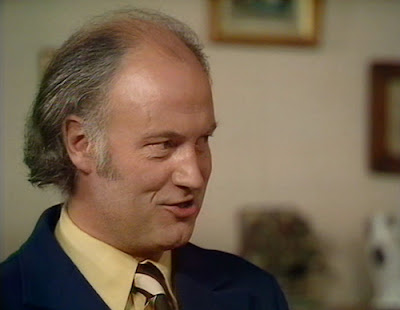 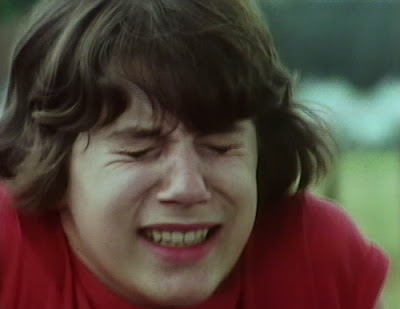 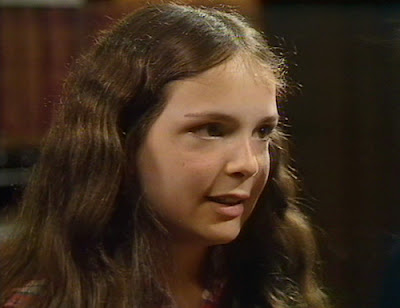 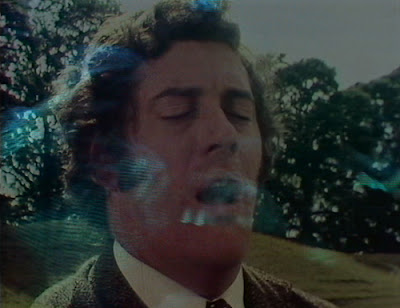 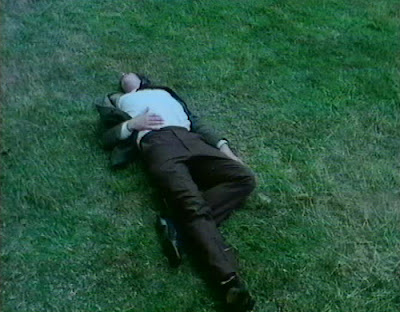 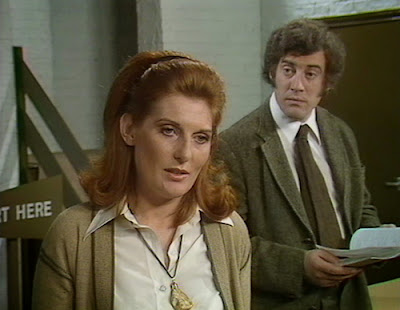 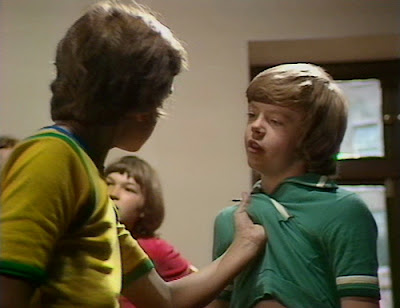 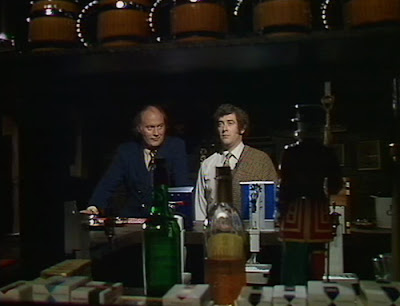 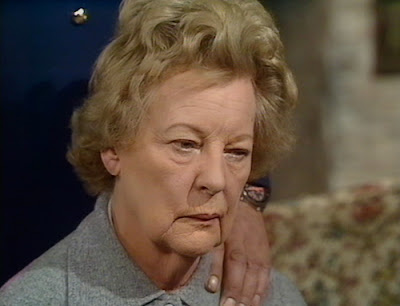